Polyphonic oscillator control allows for multiple voices to be played simultaneously on this new synth from Radikal Technologies. Meet the DELTA CEP.

Radikal Technologies’ DELTA CEP A can function as a standalone synthesizer or — when removed from the chassis — a 68HP-occupying Eurorack module forming the centre of a powerful modular voice. Whichever way it is brought into play — purchasable as a desktop paraphonic semi-modular synthesizer or Eurorack paraphonic semi-modular synthesizer module, the deftly-designed DELTA CEP A is the perfect starting point for any modular user. Undeniably it lives up to the PARAPHONIC-MODULAR wording boldly blazoned across its featured-packed fascia.

For the benefit of the uninitiated, a paraphonic synthesizer is one where all of the notes generated go through a single filter and VCA (Voltage Controlled Amplifier) combination. “Paraphonic synthesizers can be played polyphonically, because their oscillators allow for independent pitching according to chords.” So states the DELTA CEP A owner’s manual, before positing: “Polyphonic oscillator control allows for multiple voices to be played simultaneously, which is ideal for pad sounds. The DELTA CEP A sounds particularly good in paraphonic mode, because it consists of two oscillators per voice, which provide a nice beating effect when two oscillators are detuned against each other.”

Encompassing no fewer than 23 knobs, 14 buttons, 28 RGB LEDs, 14 outputs, and 17 inputs straightforwardly spread across its feature-packed facia, DELTA CEP A duly delivers on its potent potential for serious synthesis — still further boosted by adding additional modules. Carefully chosen connectivity provides users with welcomed freedom to integrate it into their existing Eurorack small-format modular system. Or opt to use it as an independent standalone synthesizer with Radikal Technologies’ desktop-destined alternative, courtesy of the tailor-made chassis — complete with integrated stereo OUTPUT; stereo FX-INPUT; MIDI IN, OUT, and THRU; and DC 12-19V, 2A DC-IN connections, plus onboard ON/OFF switch. 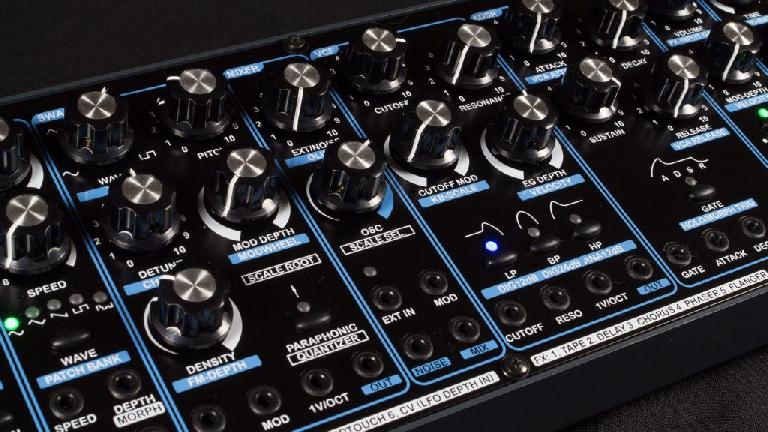