Language
Reason users have had access to the excellent M-Class mastering processors for a while now, but due to the lack of audio support users were limited to only mastering material that had been created...

Reason users have had access to the excellent M-Class mastering processors for a while now, but due to the lack of audio support users were limited to only mastering material that had been created within Reason.

Now using Record any audio can be imported and treated with not only the M-Class processors but the impressive new Buss compressor attached to the console's master section. Let's take a look at a very quick way to get started.

The first step is to import your audio into a fresh audio track. Of course you could actually master a fully-fledged multi-track project in this way but I find it's good practice to make a separate project. An added bonus is that it's much kinder on your CPU! 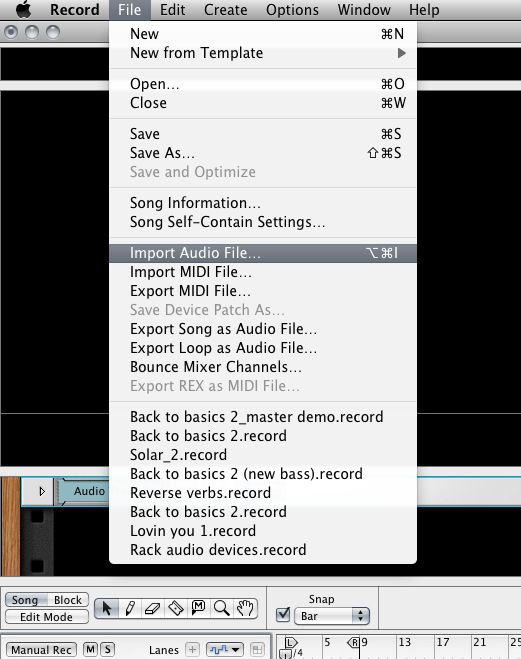 So choose File > Import Audio File... (Option-Command-i). You'll now get your standard browser window and you can choose the audio you want to master. This will then be imported on a fresh new track and we are good to go.

The audio to be mastered is in place

The audio from a rough demo clip:

One of the great features of Record is the buss compressor at the end of the console's output stage. This compressor is modeled on SSL's classic Master Buss Compressor found on their large High-end consoles.

The compressor can be found right at the top of the master section in Record's console. For mastering purposes try using a ratio setting of 2, long attack release times, and a threshold setting that induces a 2 to 3dB of gain reduction.

Even this subtle dynamic control will make a difference to your mix, adding cohesion and energy.

Some buss compression is applied:

Next up we can think about using Record's more fully-featured mastering tools. Now when a default project is loaded Record auto-magically loads up a standard set of mastering tools.

The Master Section in its default state

These tools can be found in the 'Master Section' in the rack. By default these are all hidden and bypassed but a quick click on 'Show insert FX' and the currently highlighted bypass buttons and you'll be in action! 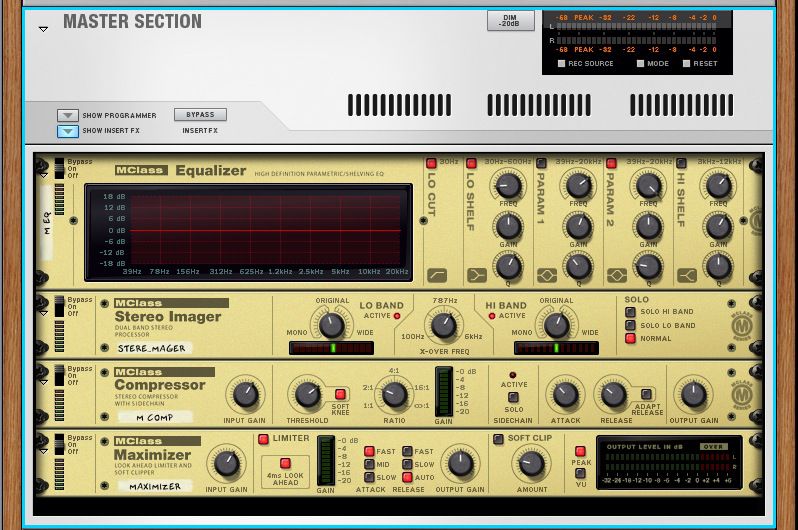 The Master Section is opened up!

You should now see all the M-Class processors. It's worth noting that some of these will be bypassed, too. In this case I left the rack in its default state, leaving the compressor and stereo imager bypassed. We now have an EQ and a Limiter.

I used the EQ to remove some very low end with the Lo Cut filter and added some brightness in the higher frequencies. The Limiter was then fed with some gain and the attack and release set to slow. The soft clip was activated and about 3 to 4dB of gain reduction was induced. 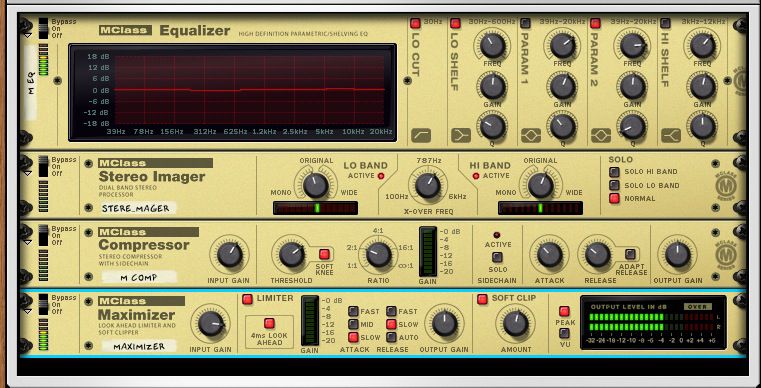 Some simple settings are dialed in.

So that is our super fast mastering session done. Of course I wouldn't advise this sort of approach if you are completing a critical project but if you are creating a demo, something for personal use or are new to the mastering process, then this could be a great way to get into a little post-production.

Using the meters for a final check.

The final step would be to check your work for clicks, pops or distortion, and then export the final result. Do this by selecting your area with the left and right locators, going to File > Export Loop as Audio File... You'll then have some dithering options if you need to go to 16-bit audio.

And here is our quick mastering job, completed: