With internal sampling, live input, two granular streams and the ability to work as a DSP platform, Qu-Bit's Nebulae V2 is a remarkable piece of gear. Scott Riesterer certainly thought so...

Version two of the Qu-Bit Nebulae granular sampler and DSP platform brings a fairly comprehensive overhaul. The panel has been completely reorganized, with the largely unnecessary MIDI input removed, additional granular features have been added, and the jacks have now been arranged at the bottom of the module. Plus, under the hood the performance and sound quality have been improved. So let’s blast off and take a voyage around the Nebulae.

Granular synthesis is a technique that splits an audio file into tiny grains of usually 50ms or less. By looping and overlapping playback of these grains it becomes possible to alter the speed of a recording without changing the pitch, and vice versa. This method is what makes the warping engine possible in Ableton Live. Similarly, Nebulae has separate controls for speed and pitch allowing them to be controlled independently. Turning speed counter clockwise will slow and then reverse playback. Pressing the speed encoder will reset playback to regular speed and then reverse direction with another press. Pitch can also be reset to default by pressing its encoder.

Nebulae works with stereo 48kHz wav, aiff or flac files, and is able to load up to 75MB into memory via an included USB stick. The files are read off the thumbstick upon booting the module and once read, the USB stick can be safely removed and the module can be power cycled without any worries of interrupting playback or losing files. You’re able to toggle through files in alphabetical order by pressing the file button, with the option of reversing the order or randomizing file selection. 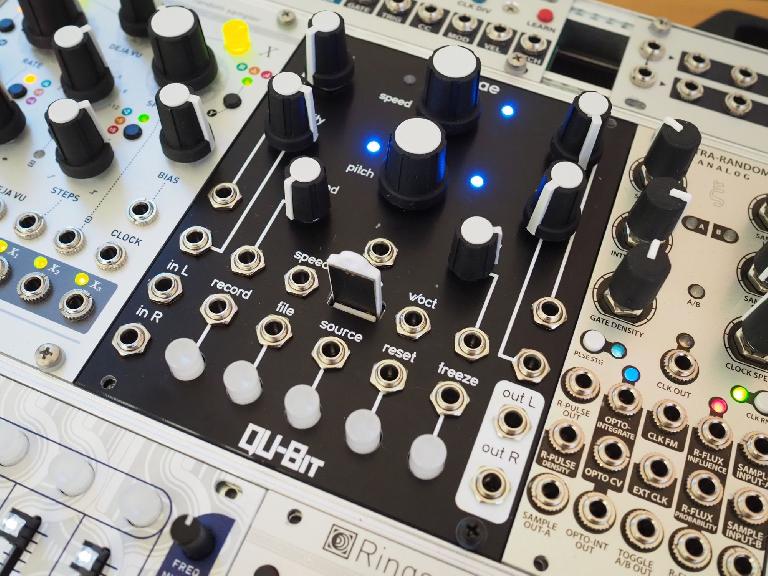 File playback is actually performed through two simultaneous streams, one using something called a phase vocoded loop and the other is pure granular. The blend knob crossfades between the two streams with the former on the left and the latter on the right. Pressing the source button deactivates file playback and instead uses the signal present at the left and right inputs. In this mode, the blend knob crossfades between the live input at 12 o’clock, the phase vocoder counter clockwise, and the granular stream clockwise. Just be aware that you will have to record something into the audio buffer for those two outputs to be heard.

Ableton’s warping engine was one of my favourite early tools for manipulating field recordings. I used to really enjoy stretching and squishing audio into rhythmic patterns, along with the bizarre artifacts that would crop up from extreme time stretching. Nebulae’s phase vocoded loop has a reminiscent character to Ableton’s warping engine, with a simplified tactile interface. The start and size knobs determine the position of the loop within the recording, and using these controls to sweep the virtual playhead can yield some very interesting textures.

The granular stream can be a little harder to tame, as it’s possible to get clicks or no sound at all depending on the position of the knobs. If density is counter clockwise, very few grains will play so you will only get the occasional blip until you turn up this control. With higher density settings you can transition from a mild shower to a deluge, with window and overlap determining  the smoothness of the result. The two granular output streams have a very different flavour, and blending them together offers the best of both worlds. While Nebulae is primarily a granular sampler, it is also a DSP platform. In fact if you look at the bottom of the module, it’s actually a Raspberry Pi made into a eurorack module. It supports Pure Data, Python, and CSound files, so you can make your own custom instruments to load into the hardware. If you don’t feel up to the task, Qu-Bit has a growing library available free to download on their site. I just noticed a four voice drum module was added since last I checked, but there’s also a delay/reverb, a one-shot sampler, and a synth voice.

Because I built my system with the intention of mangling field recordings, and already had a very capable sampler in the form of the Elektron Octatrack, for the most part I had been avoiding eurorack sampling. Instead I would either play back recordings from my computer, Octatrack, or even a live microphone input and run them through the modular. However with Nebulae in my rack, I realized I could now eliminate that reliance on outside sources and use my system on its own to both produce and process recordings. For that reason, Nebulae has been a game changer for me. It gave my system a new level of independence while still conforming to its original purpose, but it also opened up further exciting opportunities for audio manipulation.

In conversations about Nebulae, the comparison to Morphagene or Clouds is often brought up, but these modules really are three completely different kettles of fish. I should preface this by saying that I haven’t spent much time with Morphagene or Clouds, but I found them more confusing from the “haven’t read the manual yet, but let’s see what this thing can do” perspective. Morphagene is much more focused on the tape music approach, and uses granular techniques to reimagine that tradition with modern technology. Clouds was never intended to be a sampler or looper, but rather a granular effect applied to an incoming audio stream. Personally I found that I preferred Nebulae over both of these. I found Morphagene terribly obtuse and confusing, and I mostly found that I only produced pleasant results from Clouds when I drowned it in the internal reverb. 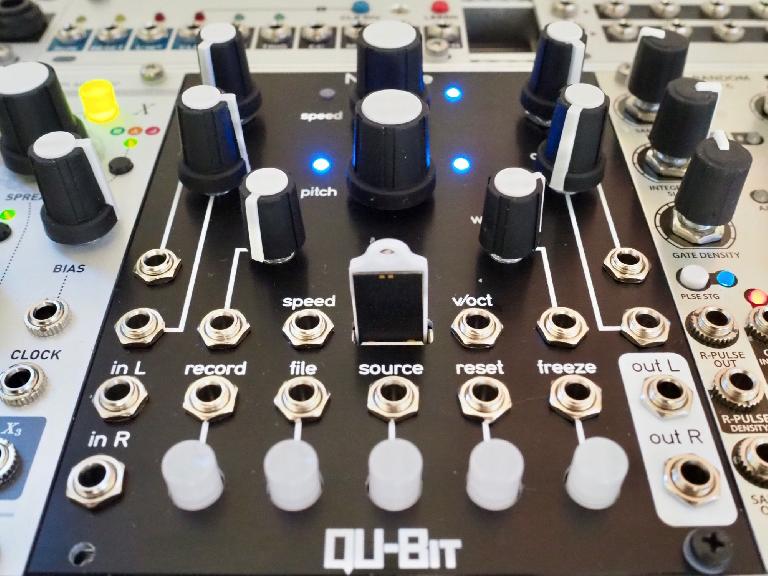 A friend of mine once explained that he felt granular synthesis was best done on a computer because you needed a large display to view and edit all of the necessary parameters. For that reason he had no interest in hardware applications of this technique. While it is true that a computer screen can offer a degree of control and precision hard to match in a module, I find that they have a much harder time delivering the same level of fun factor. Nebulae manages to offer powerful and compelling granular synthesis with no screen, a few controls, and does it in a way that is very fun and engaging to explore. I found while writing this review I would often get distracted thinking of a new thing to try, which led to another round of tinkering, which in turn led to my surprise at how much time had passed.

This intergalactic granulizer is a stellar module. The controls are simple and clear enough to dive in without consulting the manual and still be able to make some cool sounds. Yet there is enough complexity to provide a deep level of future exploration without tedious menu-diving.

Cons: No attenuverters at CV inputs. A sample must be recorded before live input can be processed. Secondary features are not labelled on the panel.

For a complete guide to Eurorack synthesis: https://ask.audio/academy?nleloc=category/audio/topic/eurorackmodular