Pros & Cons of the 4 MIDI Editors in Logic Pro X

Logic Pro X has multiple tools for editing MIDI and each one has its own specific strengths. Joe Albano explains when you might want to turn to which one for the best results.

Logic has always been well known for its advanced MIDI features, and when it comes to MIDI editing this reputation is well-deserved. Besides the ability to macro-edit MIDI Regions in the main Tracks area, there are four dedicated editing displays for MIDI events, each offering its own benefits for tweaking MIDI events and performances. Let’s take a brief look at them.

The Piano Roll Editor is undoubtedly the most familiar and popular of Logic’s MIDI editing displays. As with all such editors, it shows MIDI events on a grid with pitches displayed vertically and, naturally, time—bars & beats—horizontally. For most typical MIDI editing tasks, the Piano Roll Editor has all the features you’d need to get the job done, along with a few extra niceties. 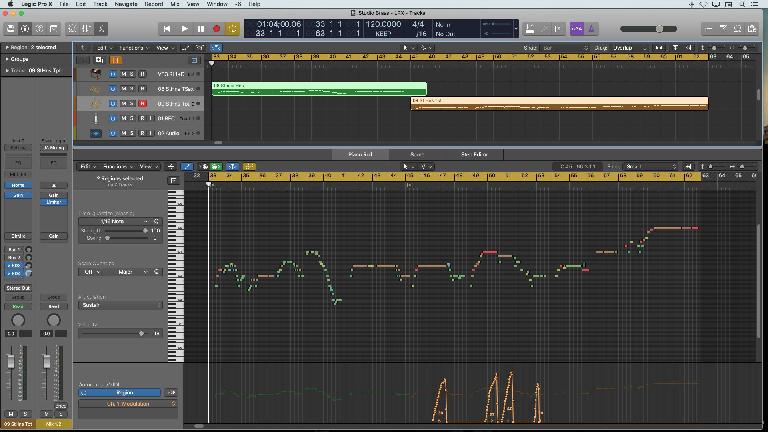 Typically the Piano Roll Editor would utilize the familiar Logic Link button, which makes it display the contents of any selected region or regions in the Tracks area. Multiple regions on the same track can be selected and viewed/edited, but it’s also possible to select and edit MIDI events in multiple regions on different tracks as well. Of course MIDI notes can be dragged around the display for basic pitch and time adjustments (option-dragged to make copies), and the display has its own menu for choosing snapping behavior and resolution. Dragging the starts and ends of notes adjusts duration, and handy help tags show the actual numerical values as any edits are being made.

A comprehensive set of tools is available specifically for the Piano Roll Editor: you can select not only the main Tool but a secondary Command-enabled tool for quick edits—I usually set this to MIDI Velocity. Besides the usual choices, there are also more creative tools, like the Brush tool, which offers a way to quickly add a sequence of notes by dragging in the editing area—the current Quantize value determines the number of steps/notes created as you drag with the Brush, a nice step-editing alternative to dropping in notes one at a time.

Additional new features include Time Handles, a way to easily time-stretch/squeeze notes. When enabled from the Functions submenu, Time Handles let you make a selection of a group of notes, and then compress or expand time by dragging on either handle, with helpful visual feedback—this can be useful in a wide range of scenarios, like tweaking the timing of drum fills (in an un-quantized) drum part. There’s also an option to collapse the note grid down to only notes with events—the idea is to more effectively turn the Piano Roll into a drum editor, and with certain Logic Instruments the names of the individual drums are displayed in this mode. 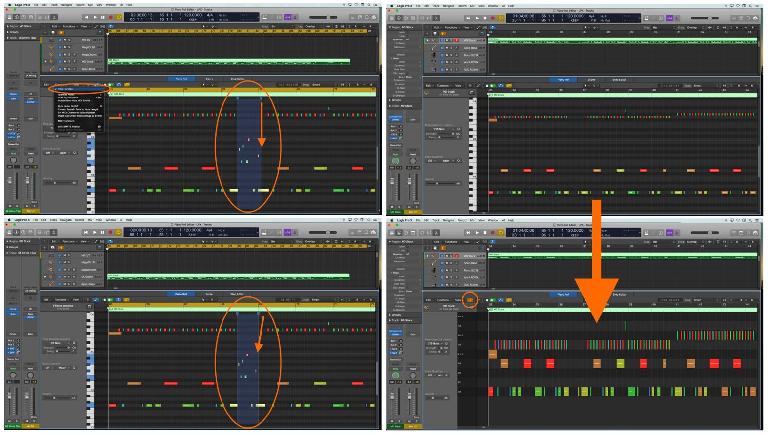 Color-coding is utilized to good effect. By default, color indicates MIDI note Velocity from quiet notes (deep blues and purples) to medium velocities (greens and yellows) to loud hard-played notes (oranges and reds)—this is very helpful, showing the dynamics of the performance at a glance, and Command-dragging on a note or group of selected notes can quickly adjust the Velocities. But there are other color-coding options as well: when notes from multiple regions are displayed, different colors can be shown for each region; notes can be color-coded by MIDI channel; and when using Articulation IDs for more expressive performances notes with different IDs can be shown in different colors, revealing the specifics of the performance variations.

Selected notes can be edited numerically via the options in the Piano Roll’s Inspector area. Time Quantization done here works in conjunction with the Region quantize setting in the main Inspector, with both active simultaneously; this can sometimes be a little confusing, but once you get the hang of it the flexibility it offers is very useful.

Besides MIDI notes, controller data can also be viewed and edited in the Piano Roll. A recent update changed the way this works—there’s a unified display option for both MIDI controller data and Logic Automation data, which are shown and tweaked in a separate lane below the note grid—all of Logic’s convenient Automation editing options can be utilized. 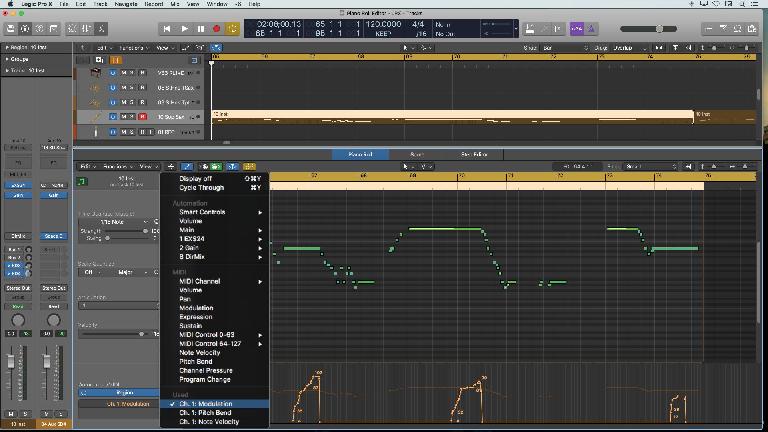 The MIDI controller/Automation lane in the Piano Roll Editor

But despite the flexibility of the Piano Roll Editor, there are some limitations. One of them is that only one lane of controller/automation data can be shown at a time, a potential inconvenience in some situations. Fortunately, whatever limits there are, Logic’s other MIDI editing displays are available to pick up the slack.

MIDI event lists have the advantage of being able to display more specific (numerical) information about the MIDI notes and events, though the list format itself can make it less intuitive to select and edit them. One very useful option in Logic’s Event List is the set of display filters at the top. Here you can choose the types of MIDI data you want to see in the List—you can hide long strings of controller data, or visually “solo” just one type of data, making selection and editing significantly more convenient in many cases.

The Event List is the place to be when you need to make more precise, numerical edits to MIDI data. But the List doesn’t only display MIDI event data; backing up a level with the familiar arrow at the upper left will display a list of regions—including audio regions—and those can be selected and edited here with numerical precision as well. 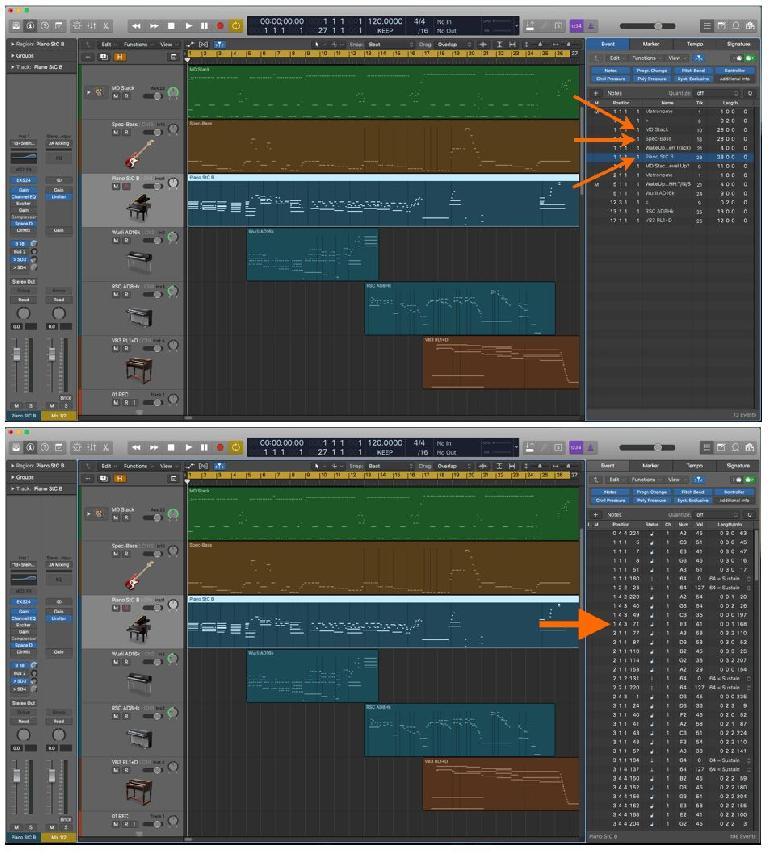 For some kinds of data, the Event list provides more useful information than the Piano Roll—a good example is Articulation IDs, Logic’s proprietary tags that attach to MIDI notes and call up various performance articulations in more advanced virtual instruments. Here you can see at a glance which notes are using which performance variations—much less obvious in the Piano Roll.

Though many people don’t use the Event List anywhere near as often as the Piano Roll, often when they do it’s used in conjunction with the Piano Roll, to facilitate some editing tasks. In fact, Event List data can be shown and edited without having to take up as much onscreen space as needed by the full Event List window—the Event Float is a small floating window that shows one line of Event List data, for the selected note/event in other editors, like the Piano Roll.

An Event Float in use

Conveniently opened or closed with Option-E, the Event Float can be used for quick precise numerical edits while working more intuitively in other editors, and it can be extremely useful in a host of editing scenarios.

I mentioned before one big limitation of the Piano Roll Editor is the ability to display only one controller/automation lane at a time. While that can often be fine, there are plenty of situations where you may need to view multiple controllers—that’s where Logic’s Step Editor comes in. 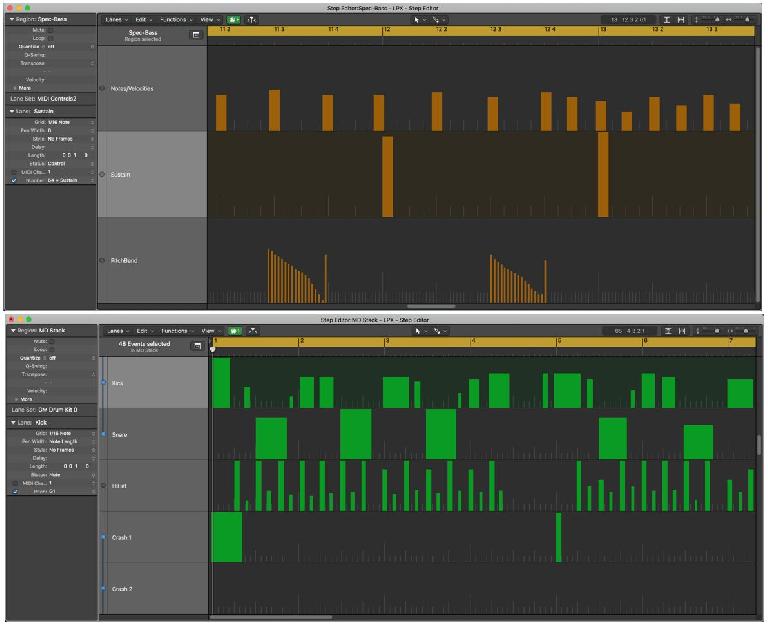 The Step Editor consists of a set of lanes, each one displaying a different type of MIDI data—notes, controllers, pitchbend, etc—and besides the basic layouts provided you can create and save custom Lane Sets. There are plenty of controls for customizing the layout of the lanes and the display of the MIDI data in each lane. Although the data is displayed as discrete events rather than as lines (as in the controller/automation lane in the Piano Roll Editor), there is a selection of tools that make creating and editing strings of data just as convenient—you don’t have to step in each MIDI event in a controller string, you can draw it in or drag-edit with the appropriate tool.

The Step Editor offers the ability to not only work with multiple lanes of controller data, but also to function as a grid editor for drums; in the latter scenario each lane corresponds to a different note, making to easy to view and tweak drum patterns—Logic provides a template for the General MIDI drum layout, but, again, you can create a custom Lane Set for your own preferred drum map.

Finally, Logic provides a Score Editor, which displays MIDI notes in standard musical notation. Unlike the scratchpad score editors in some DAWs, Logic’s is a full-featured notation tool, with enough graphics tools and options to create, edit, and print out proper scores and parts. While the other editors require no specialized musical knowledge, naturally the Score editor is most useful for people who already read traditional music notation—those users may find that the familiar notes-on-staves display offers a more accessible way of approaching MIDI performance data. Obviously notation is a specialized application, which is well beyond the scope of this piece, so I’ll just briefly touch on the Score Editor as an alternative MIDI editing tool. 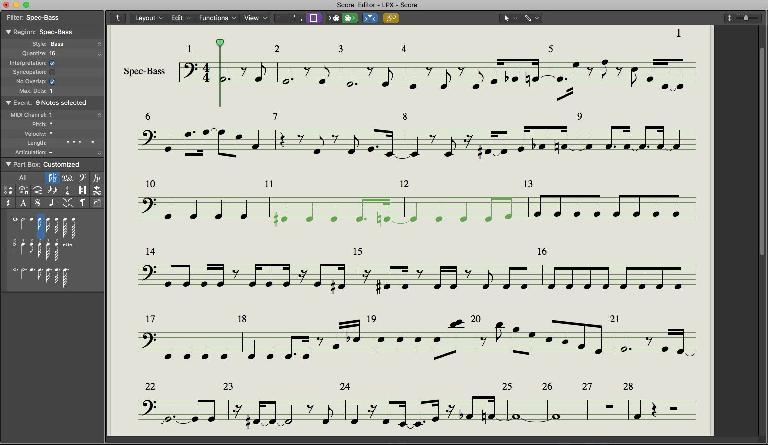 The Score Editor offers the option to show the MIDI notes on a continuous timeline—as with other editors—or in a Page view, as the notation would appear if printed out. Besides the graphic aspects, the MIDI note data can be fully edited for pitch and duration by the usual methods—like dragging—and text can be included, which can be useful for relating notes to lyrics. One important thing to note is that the notation display can be visually quantized independently of the actual MIDI performance data; that means the score display of an unquantized performance can be cleaned up—necessary to a proper notation display—without having to sacrifice the timing nuances of the musical performance.

This is important to ensure proper readability if the Score Editor is used to print out parts for vocalists or musicians. In some sessions a vocalist who reads music may be provided a lead sheet with melody and lyrics; or a MIDI track may be standing in for a future live performance on an acoustic instrument, with the player provided with a musical chart courtesy of the Score Editor’s notation display.

So each of Logic’s MIDI Editors have something unique to offer when tweaking MIDI data. While the Piano Roll Editor is undoubtedly the go-to editor for most users, there’s always a particular situation or scenario where one of the other editors will be needed, either as a convenient adjunct or to perform a particular type of editing it’s uniquely capable of. I still keep dedicated screensets in my Template, each optimized for a particular editing display, to make switching between them even more efficient. Taken together, Logic’s editors have all the bases covered when it comes to MIDI tweakery.

Learn much more about working with MIDI and audio in Logic Pro X in the Ask.Audio Academy: https://ask.audio/academy?nleloc=category/audio/topic/logic