Language
As more and more people pirate music the question seemsÂ to be less how to stop the torrents and more aboutÂ how to profit from that activity.Â People pirate music, and everything else that is digital.
Note: Under no circumstances does Ask.Audio / NonLinear Educating condone piracy or the violation of copyright. Piracy affects real people and often ruins lives and careers of innocent hard working people.

According to Google’s transparency report in the last month alone there have been 64,275,455 DMCA takedown requests. That type of request is someone claiming a copyright violation somewhere on online. There is no quick way to know how many of those have to do with music, but If you look at the top 20 listed URLs of alleged copyright infringement, 12 of them say “music” or “mp3” in some way in their domain name.

This doesn’t even take into account Torrent downloads and direct P2P sharing. But it is safe to assume that pirating music is rampant and doesn’t seem to be slowing down.

It has been the music distribution establishment’s mission to squash any copyright infringers via prosecution or threat thereof. That is, of course, their prerogative. However, that is essentially bringing lawsuits against fans of the music being pirated. Which kind of puts the bands themselves in an awkward situation.

Pirating music undoubtedly has some benefits for bands. The music gets disseminated quicker and further when it doesn’t have to be bought. That is great for the band and its reach, but not great for Universal, Warner or others who have made an investment and want to collect royalties and make their money back and then some.

However, even with the diligence of the major distributors, if we look at the number of sites and various other ways people can access shared music we would find that number growing not shrinking. So, the real question seems to be how can they begin to profit from piracy?

It would come as welcomed news to the major distributors that there are some great ideas starting to show themselves that are going against the grain of DMCA takedowns and legal battles.

Muzit’s TRACE Marketing Platform has just been launched. It aims to track where and who is sharing and downloading a band’s music via torrents. Not to take them to court, but to set up targeted marketing in the hot spots of downloaders.

“Founded by artists, for artists, Muzit is a big data company dedicated to helping content providers build positive relationships with their fans. Based in Santa Monica, California, Muzit enables artists to leverage their copyrights into a marketing machine that increases fan satisfaction while increasing monetization.”

Think about it. If you had the analytical data of the top 15 cities in the US that were illegally downloading your music, why wouldn’t you set up a tour in those places? Or target those locations on Facebook with merchandise, legal buy links, or other special offers that will lead to actual profits.

I know it might seem counter-intuitive to say market “legal buy links” to people that you discovered via an illegal torrent download tracer, but hear me out. According to a study done by Columbia University called “Copy Culture in the US and Germany” those low-down hooting pirates purchase 30% more music legally than those that don’t do any pirating.

Essentially, instead of searching these people out to prosecute them why not find them and give them more of what they clearly want?

I had a chance to ask some questions of Tommy Funderburk and the TRACE team to find out a bit more about what the program is all about and their future plans.

What specifically are you tracking? i.e. Torrent trackers, DL data from torrent sites?

Muzit TRACE tracks downloads across a number of networks and that number is constantly growing. We track real events, so by that metric our data is 100% reliable. Yes, the numbers of downloads are matched up with the specific torrents which are confirmed to have content which is under the copyright umbrella of the artist being traced.

Are you taking into consideration file-sharing sites like mediafire, zippyshare, mega?

Torrents are our primary focus in this first release. As we grow, we will continually expand the data streams we monitor.

Who is allowed to join the website to trace artists?

While anyone can register and get an account on Muzit TRACE, our offering is very much focused on the needs of artists and other copyright holders.

Who is already being traced? (Universal, Warner top artists?)

We already trace many of the top artists along with artists included in our beta program. We are constantly adding artists being traced and are looking forward to newly registered users to recommend artists to us.

What requirements does an artist need in order to be traced?

If someone is confirmed as an artist with released content and confirms their ownership of the copyright, we can get them set up in Muzit TRACE very quickly, on the order of days at most.

Can we expect the site to be monetized in the future?

Our bottom line is to help drive revenue for the artists. We are rolling out various programs with the artists to make that happen.

The TRACE program has only just been launched publicly. Their Facebook and Twitter have only 113 and 83 followers respectively. Which is a little strange. After all, the official launch was covered by Forbes. It was also covered by a number of EDM specific websites. Though, it seems that most websites more-or-less just copy and pasted the press release sent out by Muzit.

It will be interesting to see who starts using the platform and for what purposes. I personally think it is a rather large step in the right direction to solving an extremely large and complicated problem with a new and innovative method. And still a step that seems to keep everyone happy or, at least, happier.

UPDATE with a Twist

I had just finished this article and was about to send it along when I had to do just a little more digging. It turns out that back in 2009 the founder of TRACE, Tommy Funderburk, used to run a company that tracked down illegal file sharers and offered them a deal to squash the piracy charge for $10 per song or else they promised legal action. The program was called payartists and its website, payartists.com, is now offline.

The company seemed to be doing quite shady dealings. TorrentFreak has the full report on this matter.

It might not be a surprise that the company scrapped the payartists program and instead of sending threats of legal action, which might not even be legal, they are now sending invites to shows and giveaways. 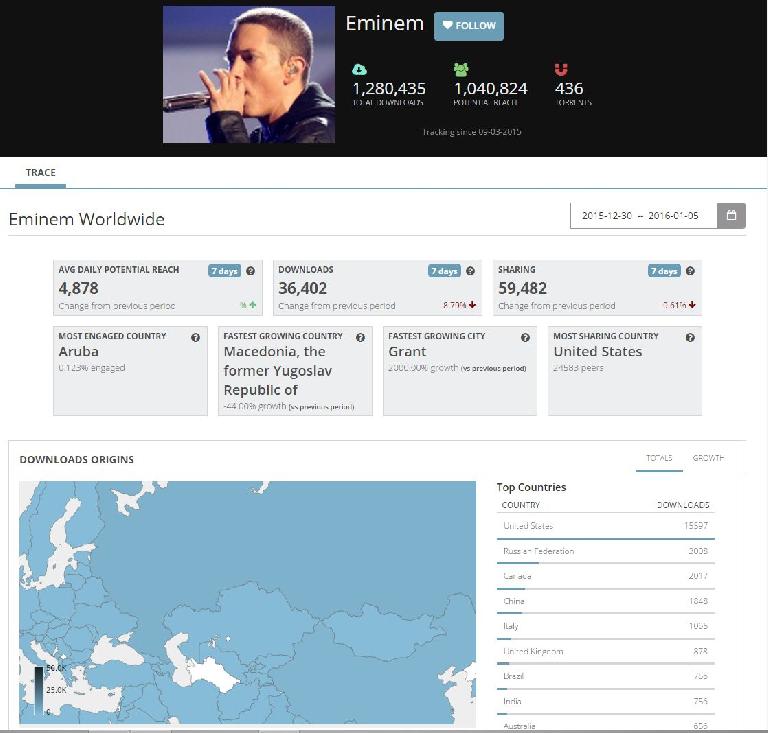 Learn about copyright & mechanical royalties in this video course.