Language
If you're having trouble creating basslines, or want a fresh take, this tutorial explores useful concepts every producer should consider when creating a bassline, regardless of the musical style.

At first glance, the bass might appear to be one of the easier parts to add to a musical arrangement—after all, the instrument only has to play one note at a time, and bass parts tend to lend themselves equally well to either performance on a “real” bass (you know, one with actual strings), or a keyboard (sampled or synth bass).

But when many musicians/arrangers/producers sit down to come up with a bassline, even if they’re skilled keyboard or guitar players, they often realize that what sounds simple isn’t necessarily so—devising a good, musical bass part may require a shift in thinking, away from composing guitar riffs or keyboard chord progressions. If may be easy enough to come up with a very basic (sorry) part, but a really good, musical bass part does more than just fill in the lowest note for each chord—its rhythm and melody, and just as importantly, its “groove”, can have a significant impact on the feel and momentum of any song. Players often joke that while the drummer controls the tempo, it’s the bass player that really drives the song, and there’s a lot of truth in that.

So, for the benefit of any songwriters/arrangers/producers who may find themselves devising basslines for the first time, this article will take a brief look a few concepts and considerations that might come into play when filling in the bottom of the arrangement. 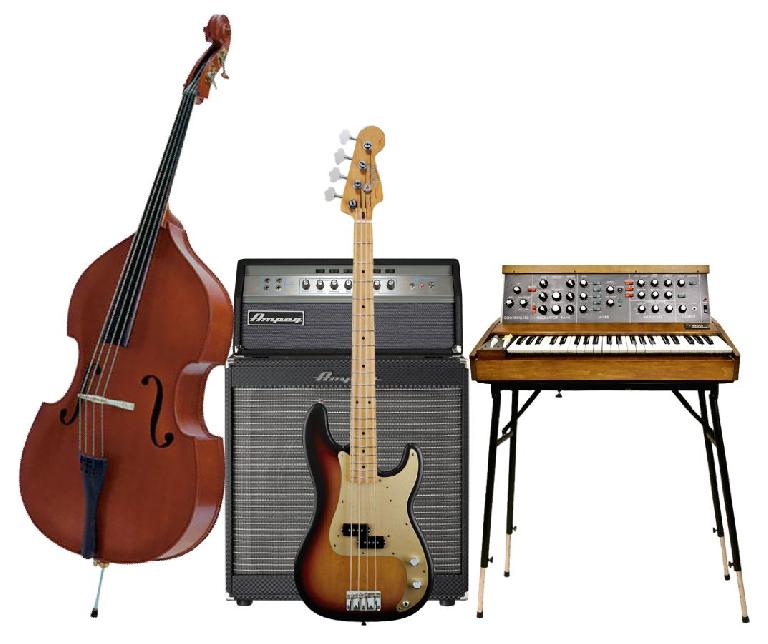 Fig 1 The Bass is a key part of any arrangement

When it comes to pitch, naturally the most straightforward bassline might simply state the Root note of each chord (remember, the Root note is the pitch that determines the Key and musical Scale for the song, which all melodies and chords are built from). And in many musical styles, having the bass stick to the Root of each chord is a perfectly viable approach. However, as the lowest note of any chord in an arrangement, the bass has the power to affect how those chords are presented, and a good bassline can take advantage of this, to provide subtle variation and progression throughout the song.

For example, in early verses, the bass may simply stick to the Roots of each chord, but then, maybe, to provide a little welcome variation, the bass could switch to playing other notes within the chords—in musical terms, these would be different inversions of the chords (with different notes on the bottom). Different inversions, while still the same chords, can sound more or less stable—have more or less tension—pushing toward the next section of the arrangement, which can help give the song a little forward motion, rather than just repeating the same chords the same way from verse to verse. For example (for those familiar with the terminology), a bass part playing the Third of a chord, rather than the Root, can make that chord sound more restless, like it’s on its way somewhere else (to a more stable inversion with a Root on the bottom), and this could help add that tension and forward motion to the song that I referred to, subconsciously piquing the listeners’ interest in what will come next, instead of letting them settle into a repetitive chord progression.

Audio Example 1—The bass can play simple Roots (1st 4 bars), or use other notes from within the chords (inversions) for musical variety, tension, and propulsion:

Taking the idea of how the bassline can affect the chords above it further, the bass can even change the chord, if it plays a note that’s not a part of that chord. By defining the chord with this new effective root note, you can have a similar chord progression, but with distinctive variations of those same chords, thanks to the different bass notes underpinning them. For a very simple example, a bass playing Roots under a series of Major Triads (basic three-note chords) might switch to playing a note that would instead define one or more of those Triads as the top three notes of a minor chord (or a Seventh chord), with the changed bass note as the new Root for the altered chord.

The Rhythm of the Bass

Of course, a bassline that played just single notes per chord (Roots or otherwise) could become pretty boring pretty quickly. Basslines typically contribute their own rhythm to the song, and as the bottom of the arrangement, what they do timing-wise can set the tone for the groove, as much as anything the drummer plays. Even a very simple example can illustrate—the same rhythm section with the Bass playing single (whole) notes, as opposed to playing faster, repetitive eighth-notes, has a completely different feel—despite the same drum part, the movement in the Bass propels the song.

Audio Example 3—The rhythm of the Bass can set the feel and drive the song:

This brings up a common question for those looking to generate a bassline—what should the bass do in relation to the kick? In the previous example, I had the bass just playing simple whole-notes or eighth-notes, but it’s common for the bass to take on a rhythmic pattern, and that pattern is often one that locks in with the kick drum pattern. This may be one of the most common ways to give the bass some rhythm, but of course, it’s not the only option. Sometimes, a bass part might deliberately play against the kick instead of playing in lockstep with it, filling in where the kick lays out.

In a real world situation, a bass part will likely incorporate many or all of these approaches—sometimes playing simple beats, sometimes locking in with the kick, and sometimes working around it. This is often where players coming to the bass part from other instruments first have to start “thinking different”—that is, thinking like a bass player would, in coming up with a series of variations for the bassline throughout the song, rather than treating the bass as a simple adjunct to the part played by their own/primary instrument.

Audio Example 4—The Bass playing simple quarters/eighths; following the kick; and moving around it:

Another imortant aspect of the bass against the kick is the more subtle timing aspect—the feel of the part. The bass part can do a lot to set the groove of the song not just by what it plays against the kick, but by where it plays against the kick. A bass part that’s consistently ahead of the kick can give the song a more pushy, more aggressive groove, while a part that lays back slightly behind the kick can make the whole song take on a more laid-back feel. Of course, we’re talking about milliseconds here, but this is one of the key aspects of how the bass contributes to the overall vibe of a song. Some bass players are known for one or the other, and if you’re programming in a part, you might want to consider whether adding a bit of positive or negative delay to a perfectly-timed programmed or quantized part might help give it a much more musical feel—again, we may be talking about only 20–25 milliseconds or so, but that little bit can sometimes make a big difference.

Getting back to pitch considerations, busier basslines will almost certainly not stick to just roots, or even single repeating notes—they’ll move around. One of the easiest ways for a bass part to do this is to arpeggiate the notes of the chords above it—this can be equally effective with a played-in bass part (real or sampled) or a sequenced synth bass part. 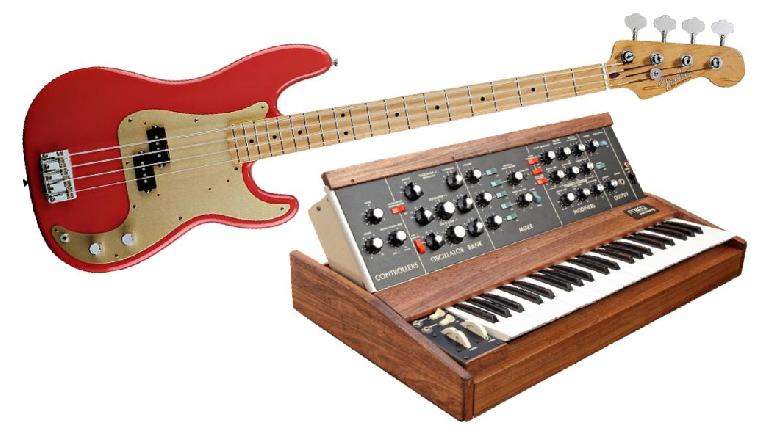 So, that eighth-note bassline could add much more variety and push to the arrangement, if it incorporated/arpeggiated other notes from the associated chords, making for a much more melodic, and interesting bass part.

Audio Example 5—More movement in the bassline can add more interest and drive:

Of course, when basslines start moving around, pitch-wise, they don’t just stick to arpeggiating the three (or four) notes within each chord. Like any melody, a bass part will incorporate all the notes in the scale, and passing tones as well. An obvious example, in some musical styles,  would be a bassline that consists of a repeating “riff”, often in tandem with a guitar playing the same part (an octave higher).

But the bass doesn’t need to be a simple octave-down double of another part—most basslines have their own melodic contour. People may know the term “walking bass”, and associate it with a familiar style of acoustic bass playing from jazz, but I like to think that, in a broader sense, a “walking” bass part may simply be one that moves around the primary note(s) a bit, to keep up rhythmic and melodic interest, especially under held chords or pads that don’t provide too much rhythm of their own.

At times, the bass can also take on a more front-and-center melodic role, picking up from the song’s main melody instruments (and voices)—there are many songs where, if you hum the tune in your head, you’ll come to the end of a vocal or instrument line, and continue humming the bass melody. Listen to a few of the many Beatles songs where Paul McCartney’s melodic bass parts are as much lead instrument as anything (in particular, check out his prominent melodic bass part in the song “Something”).

As McCartney does in that song, sometimes the bass will even do “fills” (like drummers do)—even when the part may consist of a simple repetitive bassline, during a musical transition, the bass may be the one to provide a little ear candy, with a quick run up the neck for a few beats, before settling back down in the next section.

Obviously, there’s much more that could be said about putting together musically interesting, creative bass parts, but this is all the room I’ve got, so I’ll wrap up by reminding everyone that, regardless of how a bass part is made (frets, keys, sequencer), just as with drum parts, there’s often no one better to play or program the part—or to learn from, when it comes to creating basslines—than those dedicated bass players who are used to spending all their time down there in the depths.