Language
Blocks in NI's Reaktor 6 features a tons of creative solutions and uses for synth-heads. But, did you know Blocks can also be used to process audio? It's mind blowing! Toby Pitman gets processing.

So Reaktor Blocks is certainly pretty cool for building modular type synths and for most this will be the primary use. On the other hand, it's also a very creative way to process audio. The ‘New Blocks’ startup Ensemble includes two audio inputs that you can feed in a variety of ways. And because Reaktor is both a Synth and Insert Effect that can lead to all sorts of creative outcomes.

Blocks As An FX Plugin

Inside the ‘Blocks New’ template which is found at the root of the Library folder are two audio inputs. When you insert Reaktor as an effect insert on a channel, the audio is piped straight into these inputs. 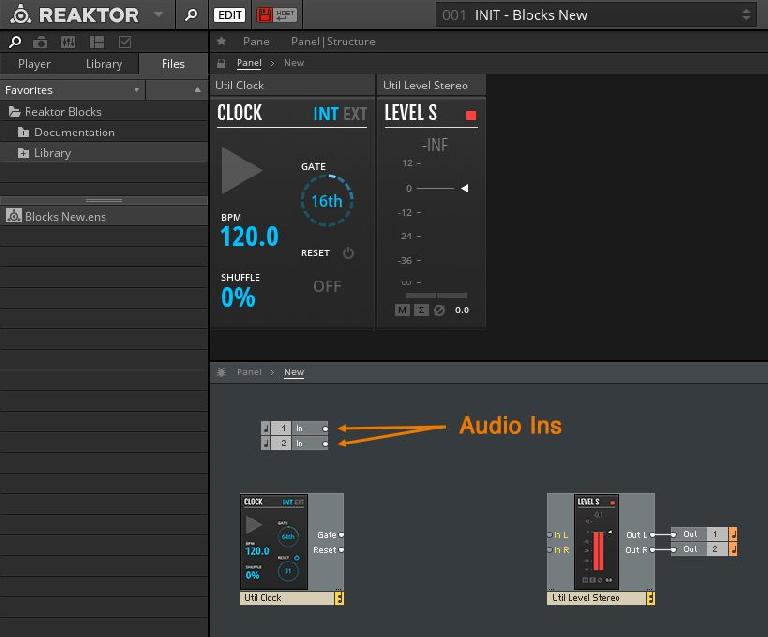 If you don’t hear anything, it’s because by default they aren’t connected to the outputs on the right-hand side.

For this simple example I’ll just drag in a couple of Bento Box SVF filters (L/R) and plug an LFO into Mod A which is then used to modulate the Cutoff. The LFO is fed a reset by the clock which is used to sync it to the host tempo. This effectively restarts the waveform every 2nd 16th note (every 8th note) as set in the Utility Clock block. 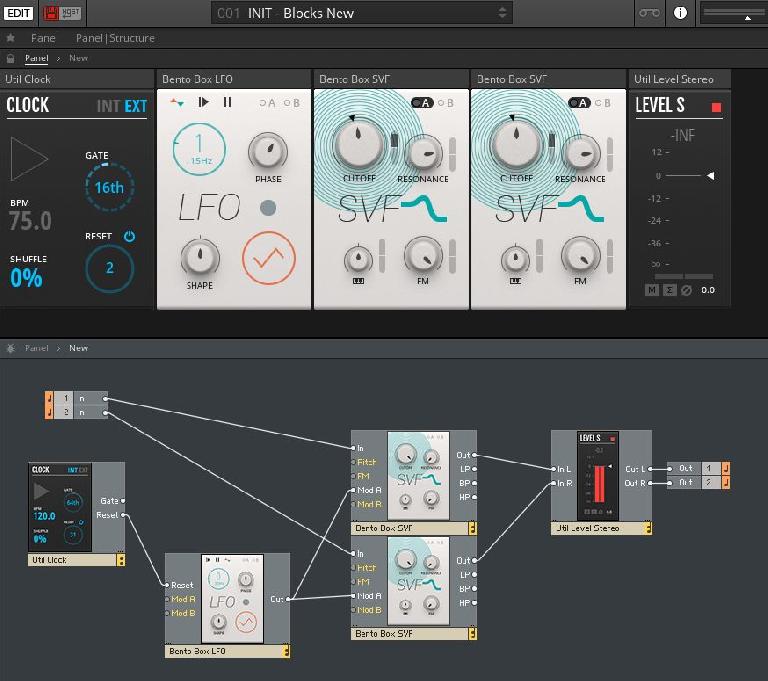 Because Blocks is modular, you can pretty much take an effect like this to any level you like. Let’s make it a bit more interesting and use an oscillator set at about 52 Hz to feed the FM input on the filter. 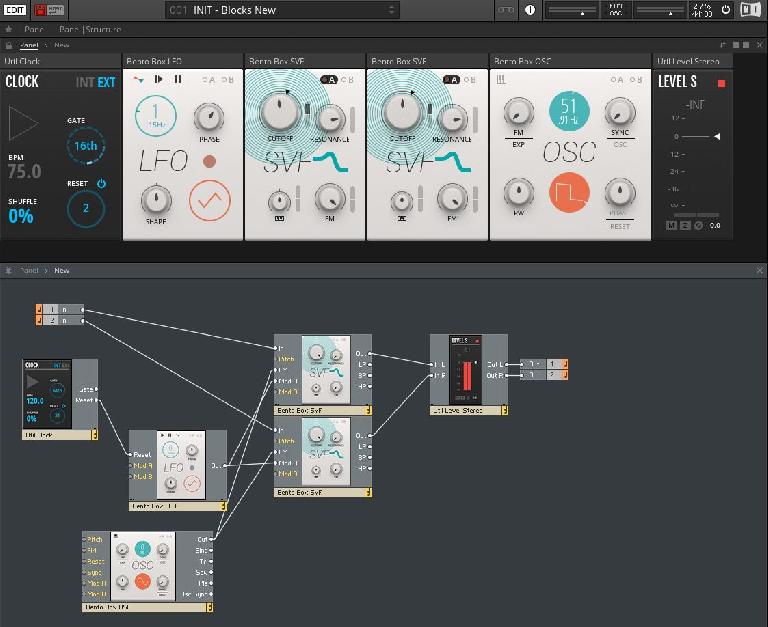 Here’s what we get:

OK, so let’s take it a step further and modulate the pitch of that oscillator with another LFO. 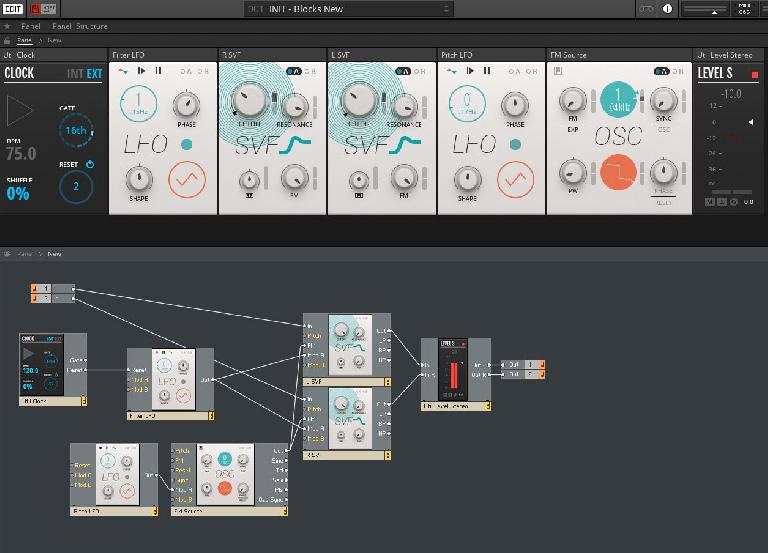 Now we get this:

Now I’ll just add a Rounds Reverb to finish up. I’ve set the ‘Center’ parameter low to get a kind of tuned delay sound. 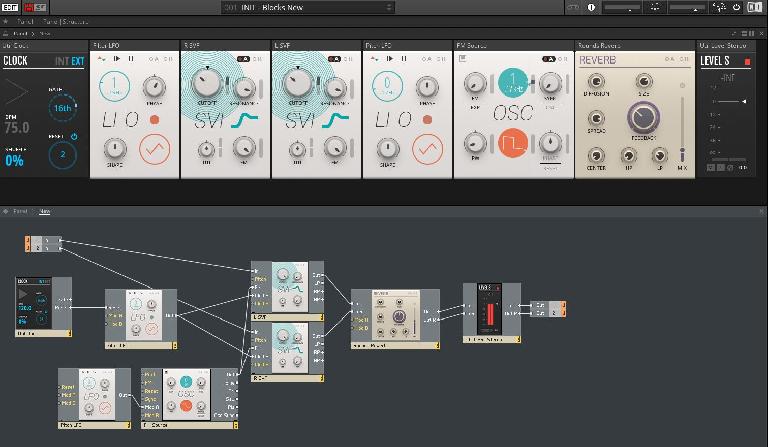 This is a pretty simple example of how you can build effects chains in Blocks with some simple tools. You can take this as far as you want and get pretty complex effects with lots of mod routings, etc. Things that would be impossible with other plugin effects are a piece of cake for Blocks as it’s totally modular! You can save them out as Ensembles for use later as well.

MIDI controlled FX plugins are quite common and usually can be found in your plugin list under ‘MIDI Controlled Effects’. This allows you to say key-switch presets like some of the Ohm force plugins or just control parameters with MIDI CCs.

To use Blocks as a MIDI Controlled effect simply requires you to load the Instrument version of the plugin like you would for any Reaktor synth.

All you need to do is route your audio into the Side Chain. Here’s the patch from the last example loaded into an Instrument version of Reaktor with the Side Chain being fed by Bus 1 in Logic.

This means I can now feed Reaktor MIDI notes, etc. All I have to do is drag in a Note In Utility Block into the Ensemble. 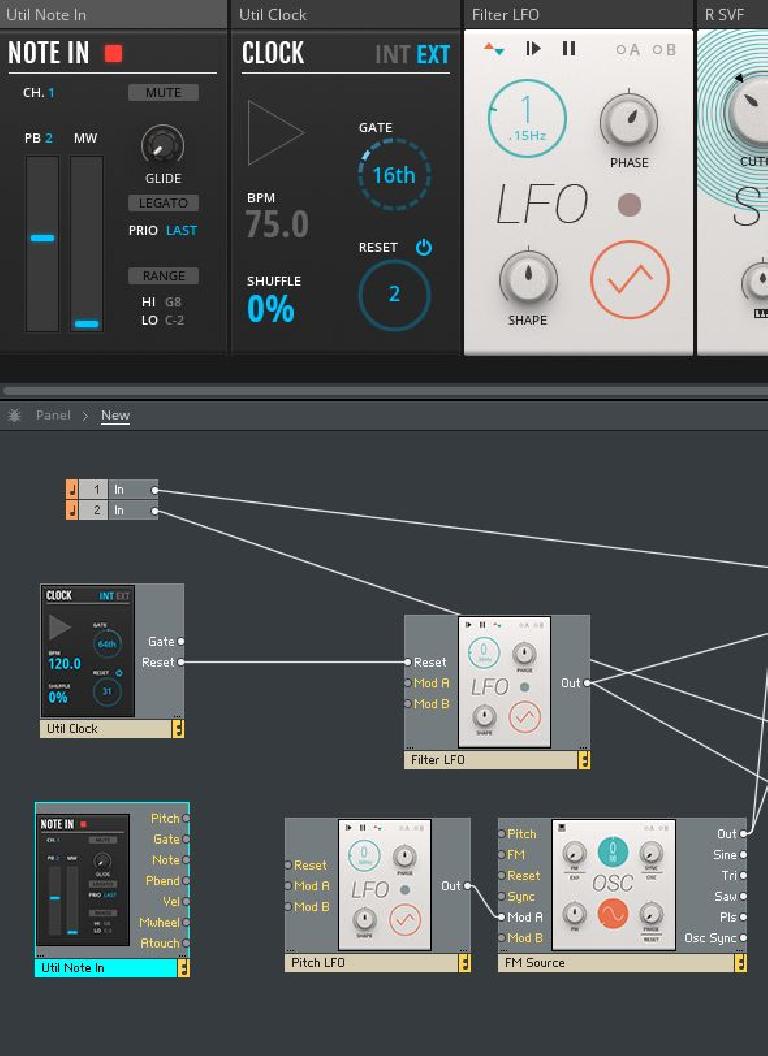 One creative use for this would be to drive the frequency of a couple of Comb Filters via MIDI notes to create an arpeggiator effect that is driven by the audio side chain input.

I’ve added the Comb Filters and I’m going to hook them via their Pitch Inputs to the Pitch Out of the Note In Block. I could also hook up Modwheel, Aftertouch, Pitchbend, etc., to control the patch if I wanted.

Here’s the start of the effect before I hook this up.

One good tip is to use the Send and Receive terminals in Reaktor to keep your patch clean. Think of these as wireless connections. Just right-click to bring up the menu and choose ‘Send’ from the Terminal menu. 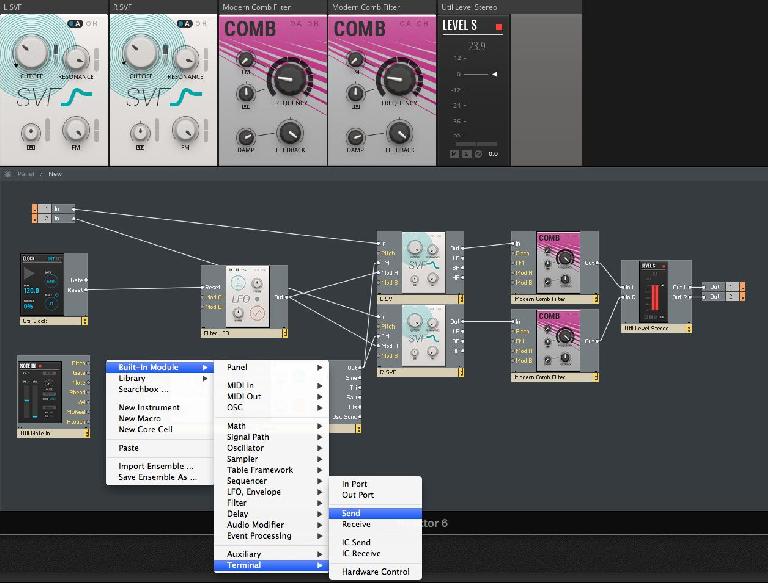 Connect it up and name it in the parameters tab. Now create a Receive terminal via the same menu. Name it and connect it to the Send terminal in the Function tab for the object.

You can make multiple copies by Option (Alt) dragging it. As you can see, I’ve connected these to both Pitch Inputs. I’ve set the Key follow to full on the Comb filters. The base pitch is determined by the Frequency knob. You’ll find a reference of the Hz frequencies of notes here. Now I create an arpeggio sequence in Logic and hit play. The drums trigger the Comb Filter which is pitched to my sequence.

I can detune these by turning down the Key Follow of moving the Frequency of one of the Comb Filters.

I can then start to route some of my existing LFOs into some of the parameters in the Comb Filter like Feedback, dampening and FM to mess things up a bit.

Here’s the Side Chain audio (drums) and Blocks together. The sound generated by Blocks moves with the drums as it’s triggered by the drums. I’ve tuned both Comb Filters to 31.7 Hz which is C1 on the keyboard and used the Key Follow to detune. I’ve added an external delay to the Blocks sound too.

If you feed it other content it will react differently to the side chain input source like these loops from Damage.

If you want different notes just change the MIDI sequence! This makes the whole setup quite versatile as you can feed it all sorts of information from both the melody and side chain audio. Save for later usage!!

Audio As A Modulation Source For Blocks

Don’t forget that you can use audio as a modulation source as well. Feeding audio into the side chain like before when using Blocks as an instrument can lead to all sorts of interesting results. You could for instance use sounds as modulators for FM oscillators and also the FM inputs on other things.

There are also utilities like Phil Durrant’s Envelope Follower in the Blocks User Library that are great for creating rhythmic envelope effects from audio. In fact the Blocks User Library is a fantastic source for expanding what Blocks can do with new and interesting Blocks showing up on a regular basis.

Hopefully this has given you some ideas for making your own creations for processing audio in Blocks.

nnlyn1702
The only effect I heard was a drop in volume. I also have not found any additional source that states this can be done. Video tutorial please?