Learning the different ways to group tracks in your Pro Tools sessions can massively speed up your production workflow as Joe Albano discovers,

One of the basic requirements for mixing and editing is the ability to group tracks together and make adjustments to several grouped tracks all at once. This has been done since the days of analog consoles, and today’s DAWs usually offer several ways to accomplish it.

Pro Tools is a perfect example—there are three track-grouping features available, and each has its specific advantages. Tracks can be grouped in Pro Tools for both mixing and editing purposes—I’ll focus mainly on mix groups. Tracks (channel strips) in Pro Tools can be grouped by either audio routing or by linking. The audio routing approach involves the use of subgroup Aux channels, re-routing the outputs of the tracks to be subgrouped, while Mix (and Edit) Groups link channels together without any signal re-routing. VCA Faders work in conjunction with Mix Groups, offering additional convenience.

There are a lot of reasons for grouping tracks together in a mix. Maybe the most common application would be to adjust the level of a number of (usually-related) tracks at the same time. If these tracks have different levels dialed up, grouping allows them to be adjusted all together, changing the overall level while preserving the inter-channel balances of the different fader levels—with larger mixes, it’s much easier to adjust related tracks all at once than to have to make lots of individual track tweaks. Grouping tracks also allows overall processing to be applied to all the tracks in a group, like compressing multi-miked drums or adding an effect to a large number of background vocals. Grouping tracks can also make it easier to perform an edit—like cutting or moving a section of music—on a number of tracks as a unit, though, as I said, I’ll focus more on mixing applications.

Besides traditional subgroups and Mix Groups, Pro Tools offers a way to perform the same operation on multiple channels, which can be applied in many ways. In the Mix window, a number of tracks would be selected by selecting the channel names—clicking a track name to select it and then shift-clicking another name will select both channel strips and al the channels inbetween. Command-clicking track names allows for dis-contiguous (non-adjacent) selection of multiple channels.

Once several tracks are selected, holding down the Shift+Option keys will perform certain operations on all the selected tracks at once. These include basic channel strip functions like Mute and Solo, but not fader or pan moves. You can also insert plug-ins, bypass plug-ins, add Sends, or change track height (in the Edit window) to multiple selected channels all at once. This kind of temporary track grouping can be very handy, but as I mentioned it doesn’t allow for the most common grouping application, level (fader) adjustments—for that, you’d have to turn to the three standard grouping features.

Traditional subgrouping runs several channels through an Aux (Auxiliary) channel strip, allowing the level of all tracks to be adjusted at the same time via the Aux channel fader. There are several steps to setting up a subgroup..

You’d create a new stereo Aux track (labelled Aux Input in Pro Tools), and set its Input to an unused stereo bus (remember, a bus is a signal pathway in a mixer)—this will be the subgroup Aux channel. Then you’d select the tracks you wanted to subgroup, as described above—typical applications might be several multi-miked drum tracks or a collection of related guitar tracks or background vocals. Via the Shift+Option technique you’d change the Outputs of all those tracks to route all of them into the same bus chosen as the Input of the new subgroup Aux track. 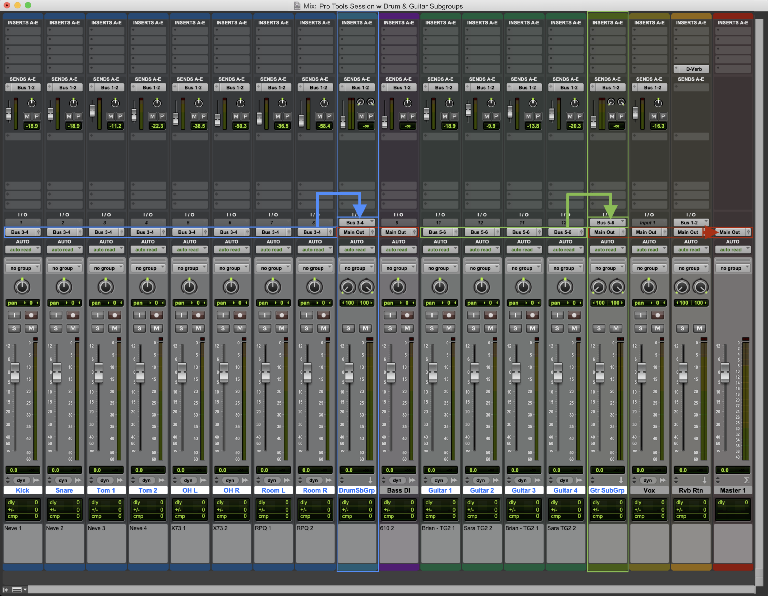 Once this is done, those tracks will no longer feed the main mix bus directly—instead they’ll go through the chosen bus to the subgroup Aux, and through the subgroup Aux channel to the main mix bus. Now the overall level of those subgrouped tracks can be adjusted as a unit via the subgroup Aux channel fader—if the different subgrouped tracks have different fader levels (which they typically would) it’s now easy to adjust their overall level all at once, without the risk of upsetting the individual tracks’ level balance (which could still be tweaked at any time).

Another possibility for the subgroup is that all the subgrouped tracks are now routed through any plug-in inserted in the subgroup Aux channel, allowing for overall processing. Examples might be adding some overall EQ to all the tracks of a multi-miked drum kit, or compressing a full drumkit for overall punch or a group of background vocals to tighten them up, all very common mix applications.

Once the tracks are subgrouped through an Aux, it’s still possible to solo the individual tracks that are part of the subgroup, but there’s a catch—the Aux will have to be soloed as well, or it’ll be muted by another track’s Solo button—an inconvenience in mixing. The way around this is to Solo-Safe the subgroup Aux channel, by Command-clicking its Solo button, turning it grey. This prevents the Solo-Safed channel from being automatically muted when other tracks are soloed, letting you conveniently solo any of the tracks feeding that subgroup.

Sometimes it’s more convenient to make adjustments to several grouped tracks within those tracks themselves. For example, if several subgrouped drum channels all feed a reverb via Sends with different Send levels, changing the overall level of of the kit via the subgroup Aux fader will change the dry/reverb balance, since the Send levels are not affected by any change to the subgroup Aux fader level. In that case it might be better to change the overall drum level by adjusting all the individual drum channel faders themselves, maintaining the level balance between them. That’s where Mix Groups come in.

A Mix Group in Pro Tools can link several channels without changing their routing. For example, several multi-mic drum tracks can have their outputs feeding directly to the main mix bus while still having the levels controlled all at once, by being part of a Mix Group. The Mix Group will allow all the Grouped faders’ levels to be changed proportionally by moving any one of the faders in the Group, maintaining the level balance between all the faders in the Group.

Now, in some (many) DAWs this can be done simply by selecting the desired tracks, creating a temporary mix group, but this doesn’t work in Pro Tools—you have to formally add those tracks to a Mix Group. The dialog for creating Mix Groups is accessed via the Groups pane at the lower left corner of the Mix (or Edit) window, or by shortcut (Command-G for a new Group). A Group can be functional in either the Mix window, the Edit window, or by default both—again, I’m focusing on just Mix Group functionality here.

The New Group dialog lists all the tracks in the Session—to add tracks to a new Group (or an existing Group, for that matter), you just select them on the left and hit the Add >> button. Name the Group and hit OK, and the new Group is created and enabled. 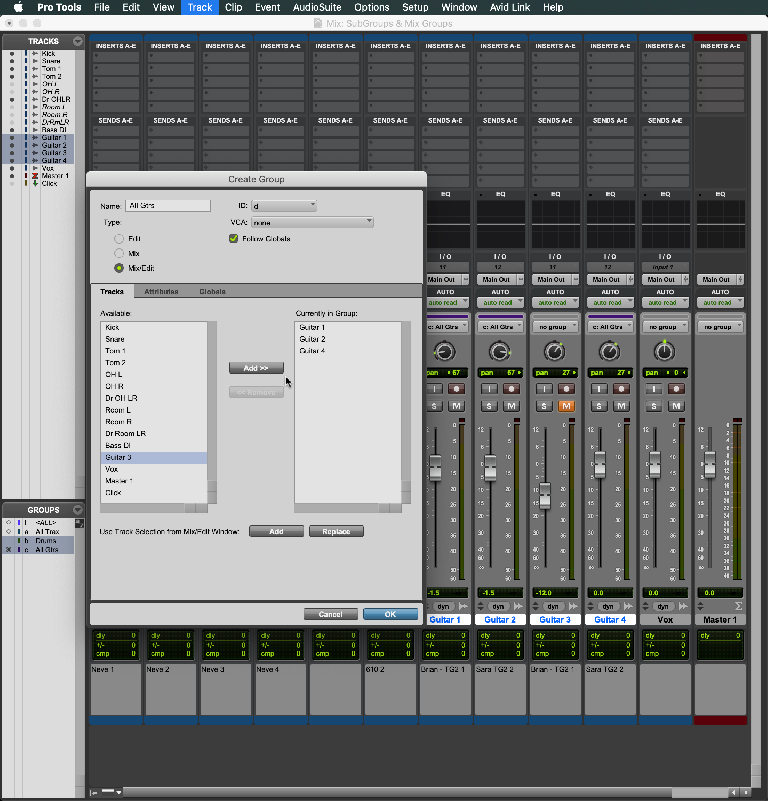 Groups can be enabled or (temporarily) disabled via the group list in the Groups pane. A convenient shortcut is to select all the desired tracks before opening the New Group dialog—they’ll automatically be added to the Group track list on the right.

By default, the Group allows for control of all the channel faders, mutes, and solo buttons (as well as Automation mode). Again, moving any of the grouped channel faders will move them all, keeping the level balance between them. To adjust an individual fader, the Group can be temporarily disabled, or you can hold down the Control key to move it on its own.

A VCA Fader can add additional convenience to a Mix Group in Pro Tools. In the early days of analog console automation, automated fader changes and mix grouping was accomplished via VCAs—Voltage-Controlled Amplifiers—on all channels—that’s where Pro Tools’ VCA Fader gets its name.

The VCA Fader is a channel strip, but one that (despite appearances) doesn’t pass any audio—it’s a control strip. You create a VCA Fader via the standard New Tracks dialog (its labelled VCA Master there), and assign it to an existing Mix Group. 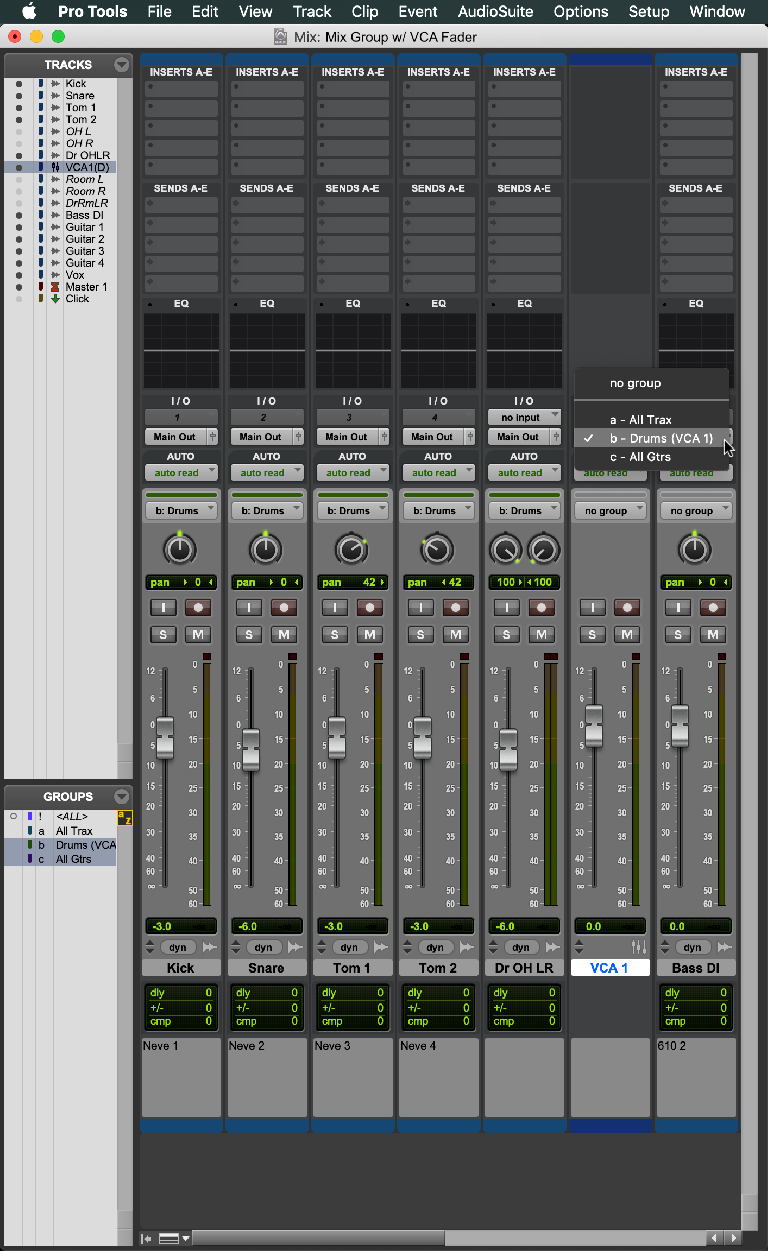 Once this is done, the VCA channel fader will move all the faders in the Mix Group, just like grabbing one of the Mix Group faders themselves. But there are a couple of advantages to the VCA Fader. You can still adjust the individual faders on the associated Mix Group without having to temporarily suspend the Group or use a modifier key—kind of a best-of-both-worlds capability. Additionally, you can use the standard Pro Tools shortcut of Option-clicking the VCA fader to quickly bring it to Unity Gain—that trick will likely mess up the fader levels if you try it on an individual Mix Group fader.

People who are new to DAWs in general or Pro Tools in particular often find these grouping options and applications a little confusing at first, and sometimes confuse subgroup routing (Outputs to subgroup bus) with Send & Return routing (Sends to Aux Return channel bus), but once they get a handle on them, grouping techniques are a mainstay for mixing, especially with larger, more complex sessions.