Playlists are one of Pro Tools' most useful features, but not everyone knows about them. Matt Vanacoro explains why you should be using them for recording and editing.

I don’t know whether it’s out of habit or ignorance, but I find that playlists are a too-often underutilized feature of Pro Tools. While many DAWs handle alternative takes and audio files in myriad ways, the playlist function of Pro Tools has been refined into an organization and workflow masterpiece. Here’s how to get going using playlists to make sure you’re not missing out.

Let’s get the basic idea out in the open right away. Playlists are an incredibly powerful way of managing multiple takes of your recordings. Gone are the days of making tons and tons of alternate tracks to keep a lot of guitar solo options or something similar. Now you can have a single track, all of your effects queued up, panned properly, volume set, and simply swap between the various playlists to play back all of those ‘takes’ through that same single track. It’s more efficient in terms of CPU power, it’s smarter in terms of workflow, and it saves valuable screen real estate for tracks that you’re actually working with.

Access the playlists menu by clicking the little drop down arrow to the right of the track name in the header. This will allow you to create a new playlists after you’ve already recorded something, switch between previously recorded takes, delete unused playlists to save on disk space, or utilize the ‘target playlist’ which we’ll get to when we talk about comping.

Keeping track of alternate takes may be the most obvious feature of playlists, but it certainly doesn’t end there. Editing your takes and creating new composite, or, ‘comp’ takes is a big part of using playlists. Say you’ve got a vocalist in the studio ready to nail that perfect lead Vox track. Have them sing the entire song and use a new playlist with every ‘pass’. Collect three or four ‘keeper’ tracks that you’re happy with. Now the fun begins!

Open the playlist menu once again and create a new empty playlist. We’ll call this one ‘Comp Vocal’. You’ll want to see your previous takes, so open the track display menu (it’s part of the track header, it probably says ‘waveform’ right now) as you see below. Select ‘playlists’ and BAM - all of your vocal takes show up.

From here, you can feel free to assemble your best Frankenstein’s monster of a vocal track by copying and pasting the BEST parts of each vocal take into your ‘comp track’. Obviously you can start with an entire take, and just drop in a few phrases here and there, or you can truly assemble a ‘best of the best’. The philosophical debate encompasses both approaches, and really it can depend on the artist and their performance as to which method works better. Either way, when you’re done, you’ll have your FrankenTake assembled into a playlist and (hopefully) will be happy with the result. Behold, the ‘best solo I never sang’ effect!

As you start to utilize playlists even more, you’re going to want to keep careful track of how you feel about each take, what its purpose might be, and more. You can quickly and easily build up dozens of takes of a guitar solo, and it can be hard to sort that all out later in the mixing stage! That’s where proper labeling and rating comes in.

Playlists are easy to label, you’ve probably already noticed that each time you create a new one, the ‘track name’ reflects that automatically with an incremental number. Feel free to rename these however you like by double clicking the name and changing it, as this makes it FAR easier to keep track of later.

Rating clips inside of a playlist can have a profound effect on your mixing later on. Right clicking a clip in Pro Tools allows you to assign a simple “1-5” rating to it. This is helpful as you can filter out playlists later on by clip rating. So if you record 10 takes of a guitar solo and rate each one, later on you can filter them out by rating. Simply right click on the name of the playlist in the track header, scroll down to ‘filter lanes’, and you will see the options for showing and hiding playlist lanes based on their clip rating. You can also show all of the lanes if you want to undo your filtering later on. 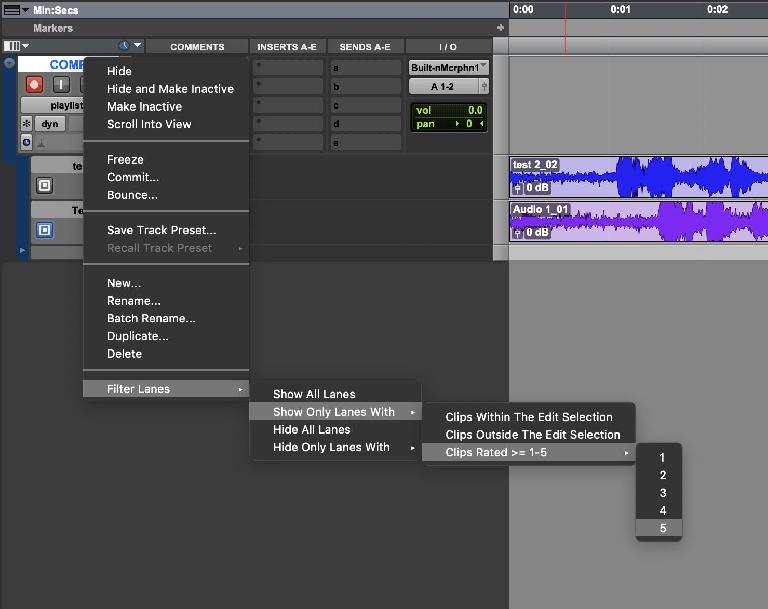 Setting the target playlist can also be a real workflow enhancement. Think of the ‘target playlist’ as your final product when you are ‘comping’ a take. Rather than copying and pasting the best parts of a take by hand, you can tell Pro Tools which playlist is going to be your ‘final product’ and then you can give clips that you like a ‘promotion’ to that final track. It’s important to note that you can tell Pro Tools that any playlist is the target one. It doesn’t have to be the one you currently ‘see’ or even the first one. 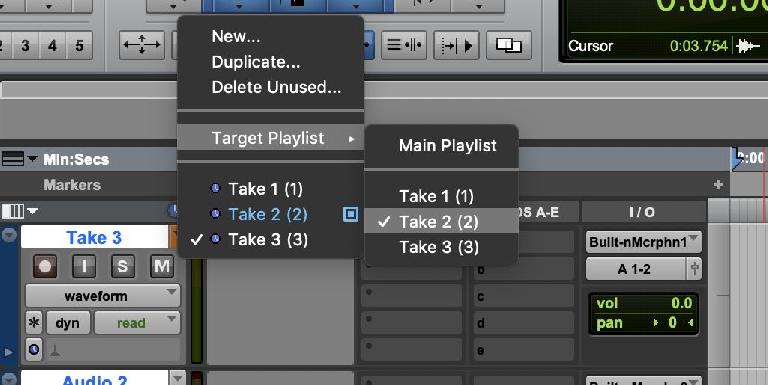 When you click on the playlist selection part of the track header, you’ll see the option to choose a ‘target playlist’. I’m sure you’ve now figured out that this is great if you have a take that is mostly great, but you just want to drop in a few bits here and there from other takes to tighten it up a bit. Choose the playlist you want to be your final product and make it the target playlist.

Now, when you’re navigating your other playlists, you can utilize some time-saving key commands to quickly get audio from one playlist into your target one! For example, selecting a section of audio and then pressing Shift-Command-Down (on a Mac, swap ‘control’ for ‘command’ on a PC) will quickly copy the selected audio from the current playlist to your target playlist. Pressing Shift-Right will bring your target playlist to the MAIN playlist, so it will be the one you hear when you play back audio.

I’m sure that now you can see the power of playlists, and the value in getting quick with them! Mastering the key commands and target functions can have you getting the best out of your audio in no time!