Language
If you use Pro Tools and are keen on your monophonic synths, then you'll find Vacuum a rather fun virtual-tube style synth. Joe Albano shows how to make an edgy bass sound.

Whenever we go hunting for Virtual Instrument sounds—looking to breathe some new life into our favorite synths and samplers—it's always tempting to turn to the collection of presets that came with the instrument. But sometimes, the best way to come up with a new take on a familiar instrument, is to pull up the default preset, zero everything, and make up a new sound from scratch, just to see where it will take you. While a lot of Pro Tools' included instruments are very-preset-oriented, if you're looking for a new and interesting synth sound, Vacuum has a full—and comprehensive—set of controls, and would be a great choice for dialing up your own synth tones.

Cleaning up with Vacuum

Vacuum, at first glance, is laid out like a traditional analog synth—very similar, in fact, to the classic Minimoog. 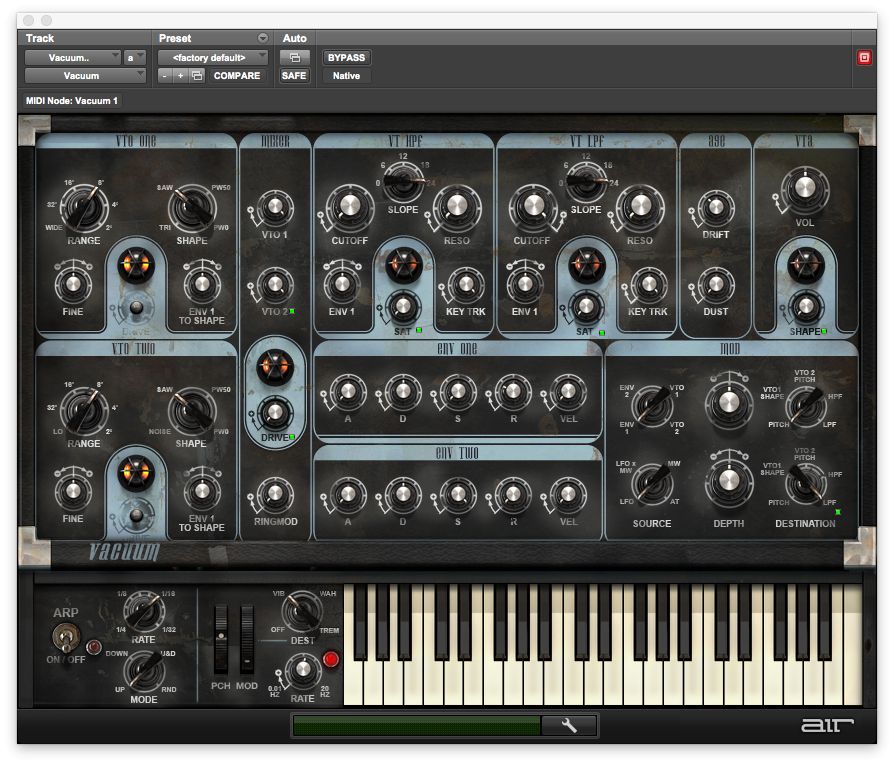 All the usual components are there—two oscillators with the traditional waveshapes, a mixer, both lowpass and highpass filters, amplifier, two ADSR envelopes, and an LFO. But a closer look reveals some extra features, that give Vacuum its own particular sound-sculpting capabilities. There's an arpeggiator included, and a Modulation section with two independent routings, that offer a number of possibilities, including the option to modulate waveshape.

The high-concept of Vacuum is that it's not just a generic synth, it's a model of a tube-based synth. There are options to drive simulated tube circuitry at several stages, and the effect is distinctly different at each stage. There are even controls to emulate the euphonious flaws that lend character to many real, vintage synths, like pitch drift and audio glitches.

Since Vacuum is a monophonic synth—which means leads and bass—let's build up a nice, edgy bass part from scratch, incorporating some of the more interesting features on tap.

I'll start by loading the default Patch, and I'll turn down Oscillator two, for the moment, leaving just one Oscillator, with a simple Sawtooth wave, as my starting point. I'll leave the Envelopes at their default setting initially, except I'll raise the Releases to 100 ms. There are number of ways to shape tone in Vacuum, but, to be traditional, I'll turn first to the Filter section. For a classic Bass synth patch, you'd probably set up a lowpass Filter, controlled by an Envelope, to add a little shape to the initial Attack & Decay of the notes, so that's what I'll begin with—LPF Cutoff at 75%, Attack & Sustain at Minimum, Decay at 120 ms, 24 dB/oct Slope, and LPF Env 1 Depth at 25%. The tonal variation will come from a fairly high Resonance setting, around 60%. So far, this is a pretty mellow bass sound, with just a little “wow” to the notes, courtesy of the LPF Resonance. 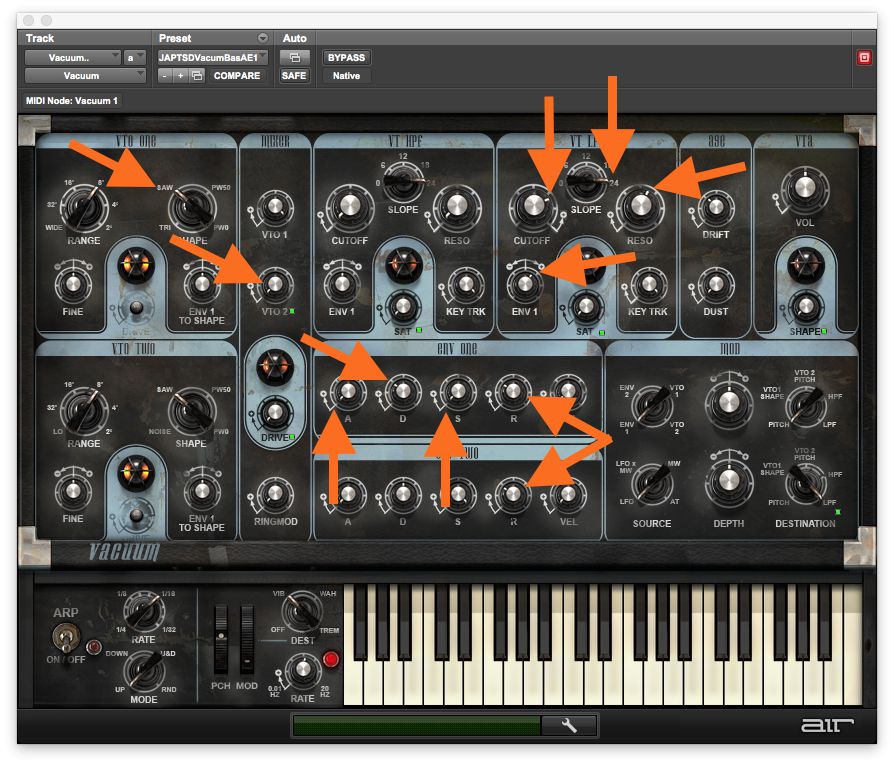 But I want an edgier sound, so I'm going to add in the highpass Filter (after all, who says that, just because it's a bass patch, you can't use a HPF?). I want to add a strong lower-frequency Resonance peak in there as well, so I'll set the HPF Cutoff to 60%. To avoid losing too much low end, I'll change the Slope to 6 dB/oct, preserving the bass, crank the Resonance up to 70%, and, once again, set Env1 Depth to 25%. What I've done is create the equivalent of two formants (instrument resonances), in the lower mids and the upper mids, which will sweep down, following Env 1's Attack & Decay, for a more interesting note envelope. Now the sound has a bit more character. 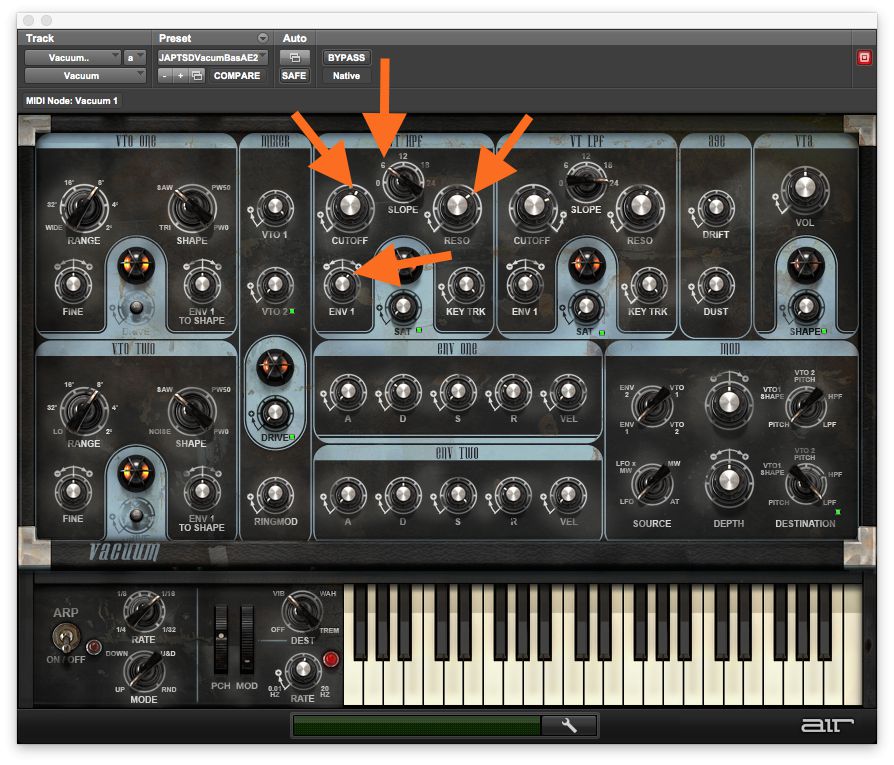 The patch in progress, with the HPF added

I'd like a bit more edge to the sound, so I'll pull in Oscillator 2, about half way up (50% in the Mixer). To fill out the low end with some grit, I'll tune it down an octave, from 8' (Like Osc 1) to 16'. For a reedier tone, I'll set its waveshape to PW50 (50% Pulse wave, = Square wave). Vacuum's Oscillators have a cool feature, “Env1 to Shape”—this sweeps the waveshape setting, following Env 1, from min or max (positive or negative setting) to the position set. I'll set it to minimum—full negative, which puts a little Attack on the Osc 2 notes. Blending Osc 2 (50%) with Osc 1 (100%) adds some subsonic growl and percussive attack to the sound. 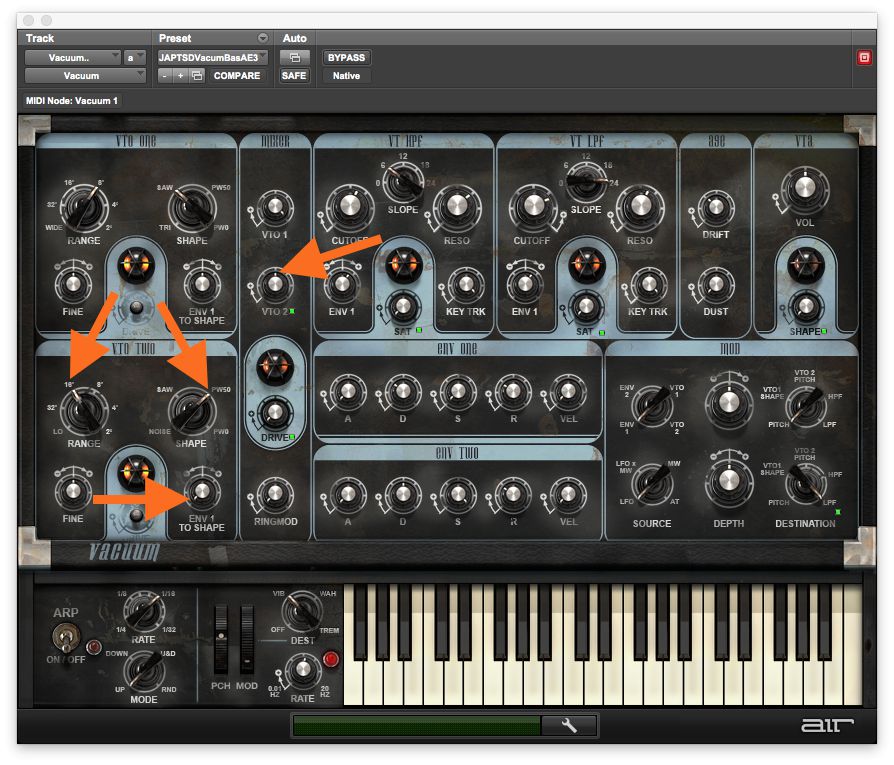 The patch in progress, with Osc 2 added, incl Env 1 to Shape.

If I really want to add some crunch to this bass, I can Drive one or more of the virtual tube stages—you get a distinctly different tonality—a different quality of overdrive—by pushing the “tubes” at the different stages, Mixer, HPF, LPF, or Amp.

Finally, I'll add a little LFO Modulation. I'll set Rate to 8 Hz, and turn the Modwheel-to-VIBrato routing off (at the bottom), and instead enable LFOxMW-to-LPF in the Mod section, with a Depth of 35%. Now, as I raise the Modwheel, I get a little classic pulsating-wah effect. As an alternative, I could modulate the HPF, for a more subtle variation on this. Of course, there's a lot more I could do in Vacuum—just working up this Patch, I discovered things I'd either forgotten about, or never realized were in there. That's why, every once is a while, I like to sit down and just start twiddling knobs—to quote the great sage of filmdom, you never know what you're gonna get.