Capturing a great take is the starting point for any well-produced track. Here, Joe Albano shares some of his studio secrets for getting the perfect guitar and bass sound at source.

Recording electric guitar and bass can be—relatively speaking—one of the more straightforward tasks in the studio, but there are still a number of considerations to be taken into account, and a few pitfalls that could prevent an intrepid recordist from getting the best results. Let’s take a brief look the process of capturing those instruments.

Basically, there are two ways to approach recording an electric guitar or bass performance—you can mic up the cabinet, or plug the instrument into the interface directly. Both are valid approaches, of course, but each of these methods has its own set of requirements and caveats. Miking the guitar amp cabinet is the simplest way to go—you just capture the sound that you and the guitarist are hearing in the room. There’s no need for the engineer to shape the tone or make any decisions about distortion or other amp settings—what’s recorded is the finished guitar sound.

The other approach—taking in the guitar signal directly—may capture a very different version of the sound. Of course it’s possible to pull a guitar signal from a player’s rig consisting of pedals and/or rackmount tone-shaping effects via line-level output from that gear, and that would also take in a finished version of the guitar sound. But nowadays the more common approach to direct recording—DI, or Direct Injection—is  to plug the guitar straight into the interface. What’s recorded in that case is the raw guitar sound, and it then falls to the recordist—in conjunction with the artist, usually—to shape the guitar tone, making critical musical decisions about amp selection, tone, and distortion, which will be applied to the raw guitar recording after the fact. Let’s start with the more traditional method, miking the cab.

The two basic considerations when miking a guitar or bass cabinet are the choice of mic and the mic position. One of the first things any budding engineer is usually advised about recording electric guitar is “throw a ’57 (Shure SM57 dynamic mic) a couple of inches in front of the center of the cabinet, and you’re good to go.” And in fact this is good advice—it’s a solid choice of mic and an appropriate mic position, and should result in at least an acceptable guitar sound. But it may not capture the best sound possible, or the sound the artist wants to hear, and so there are several variations on that most basic method.

First off, while the Shure SM57 is an excellent mic for recording electric guitar, its punchy presence may not be suitable for every guitarist’s tone—a number of other mics have also proved popular for miking up cabinets, and are used frequently. The Sennheiser 421 offers a little more top and bottom, and slightly smoother upper mids than the ’57, and some large-diaphragm studio condensers—like the workhorse AKG 414 or the studio standard U87—are also used, for a smoother tone, often with more distorted guitar sounds.

Even modern ribbon mics are frequently employed, for a more laid-back sound. On bass amps, low end response is, naturally, a key consideration—the SM57 is a little light in that department, so a mic with better bass extension would be a more solid choice. I like the ElectroVoice RE20 for it bass extension and un-hyped sound; many prefer the AKG D112—known as a kick drum mic, the D112 adds a bit of solid thump which can make for a nice, fat bass sound, depending, of course, on the tone dialed up on the amp. Once again, some LDCs might be good options here as well. 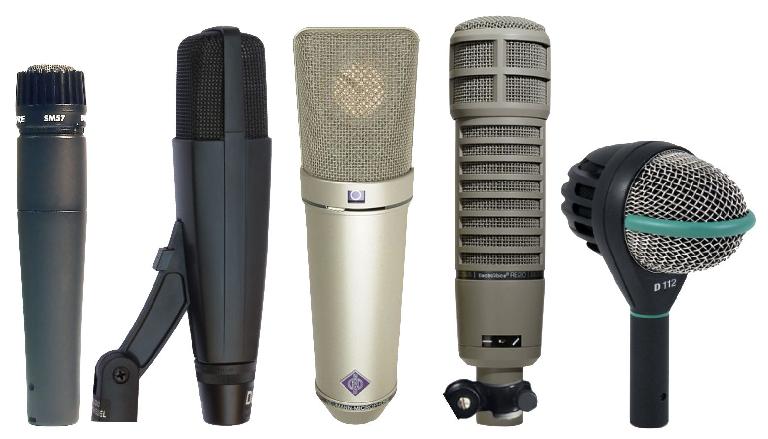 The classic advice for amp miking is to place the mic an inch or two in front of the cabinet at the center of the speaker—or one of the speakers in a multi-speaker cabinet. This placement will certainly capture the brightest tone, but that may not necessarily be the best tone. And significantly, unless the player has angled the cabinet up and aimed it directly at his ears, he’s most likely hearing a less bright, less peaky tone, since his ears are off-axis—not directly in the path of—the center of the speaker; as a result he may feel that the center-miked sound is far too edgy and harsh.

Off-axis miking is often employed as a way to deal with that; the mic can be positioned anywhere between the center of the speaker—the cone—and the edge of the speaker—the surround. The off-axis mic sound will be less bright and peaky toward the speaker edge, and might be a better match for what the player was hearing (off-axis) when he dialed up his preferred tone. Keep in mind, the response from off-axis miking is not exactly the same as what you’d get from adding a gentle lowpass filter later on—instead it’s a more complex tonal variation, with many small peaks and dips, and that can make for a richer tonality than simply filtering or EQing an overly-bright or peaky recording after the fact. 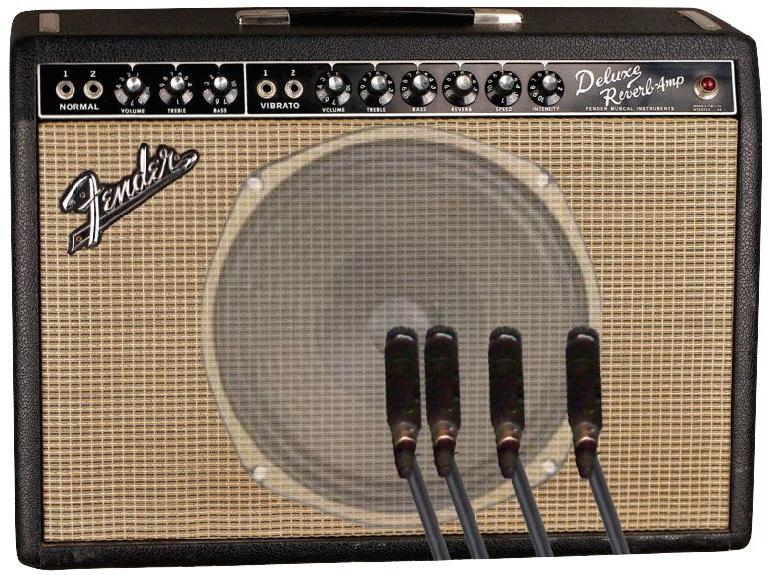 Close-miking the guitar cabinet produces a well-isolated recording, but unless the guitarist has the spring reverb on the amp cranked it’ll also be a dry recording. Of course you can always add reverb or ambience later in the mix, but many engineers like to record some natural ambience at the initial recording stage—they feel that will do a better job of capturing the sound of the amp “driving the room”, which may provide a greater sense of power. A common approach is to place a second mic (or even additional mics) a couple/three feet or so from the cabinet. This signal is usually recorded on a separate track, and then mixed with the close-miked signal for a richer, more three-dimensional sound.

Whenever multiple mics are used, an engineer has to consider the phase relationship between the signals. As long as the mics are far enough apart, it should be fine—the three-to-one rule says that the mics should be three times as far from each other as they are from the source, and considering the close placement of the primary mic this shouldn’t be a problem here, but you’d still want to keep an ear open for any negative effect that could be attributed to phase issues, both when positioning the second mic, and afterwards in the mix.

But note—with a two-speaker cabinet—like a 2x12 combo—an additional mic may be sometimes placed in close on the second speaker, and with multi-speaker cabinets—like the 4x12 cabs often used with high-gain amps—engineers sometimes prefer to position the “close” mic a little further out—maybe a foot or so—to better capture the integrated sound of the multiple speakers. In those situations—and especially if a more distant room mic is also employed as well—potential phase issues might be more likely, and it would be a good idea to listen carefully for any potentially negative phase-related artifacts when those recordings are combined. 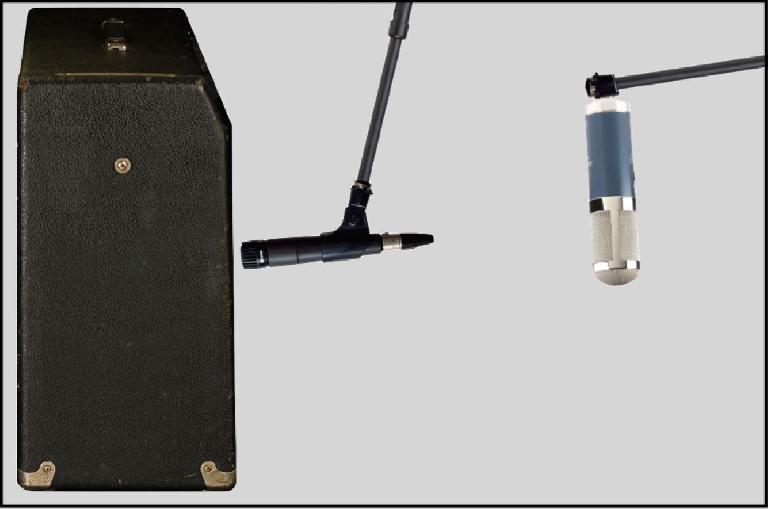 As more and more recording is done nowadays in smaller studios and home studios, DI—Direct Injection—recording of electric guitar has become more and more popular; DI’ing the electric bass has always been popular, given that bass is far less dependent on the amp tone to get a good sound. The main technical consideration when taking in a guitar or bass signal directly relates to the level and input impedance requirements of electric guitar and bass signals.

Electronic instruments—at least the majority of them that are passive instruments, with no onboard electronics—put out a very low signal level and require a very high input impedance. A lot of input gain and an input impedance of around a MegaOhm or so will be needed to avoid recording an overly-noisy signal with possible frequency losses from the impedance mismatch if the guitar or bass was plugged into a standard line-level input, even though those inputs utilize the same 1/4-inch jacks. The proper (1/4-inch) input for an electric guitar or bass will be labelled “instrument”, and will provide the appropriate gain and impedance for a clean recording. Alternatively, a dedicated DI box would also meet the requirements, properly taking in the instrument signal and outputting a standard line-level signal.

Since DI’d electric guitar signals will (usually) be fed into a guitar amp sim, it’s important that the level of the raw guitar signal be properly matched—calibrated—to the amp sim to be used. This will ensure that the gain/drive controls (and other level-sensitive circuit emulations) in the amp sim respond with the expected amount of distortion and the correct tone for a realistic emulation of the particular amp chosen. Some amp sims may recommend the ideal recorded level, typically by suggesting the input level for full-volume chords, sometimes specifically for guitars with single-coils or humbuckers. If not, I’d suggest setting a recorded level to around -6dBfs or so for full chords, which seems to work with the majority of the amp sims I’ve used.

As I mentioned above, DI is a very common approach for recording bass, but it’s equally common for the engineer to combine a DI bass with a recording of a miked-up cabinet—in fact, when a bass amp is used, this would likely be standard operating procedure. The idea is that you get the best of both worlds when the two tracks are combined—a clean signal with clear highs and deep bottom from the DI and a punchier, edgier, more midrangy sound from the miked-up amp.

But when doing this, the issue of the phase relationship between the two signals is more critical than when combining close and room mics on a guitar amp. With the typical close-placement (an inch or two) of the close mic on the bass amp, the timing/phase difference between that signal and the DI signal will usually be very small, which is more likely to introduce significant—potentially negative—phase cancellations.

Many engineers will take the two recordings, zoom in on their waveform displays to eyeball the phase-timing differences, and then nudge one of them to be in perfect phase with the other, which should provide a fuller tone, free of any unpleasant phase artefacts. If you audition the two recordings separately with the track—or at least with the rest of the rhythm section—you can decide which one sits better in the groove musically, and which one to nudge. 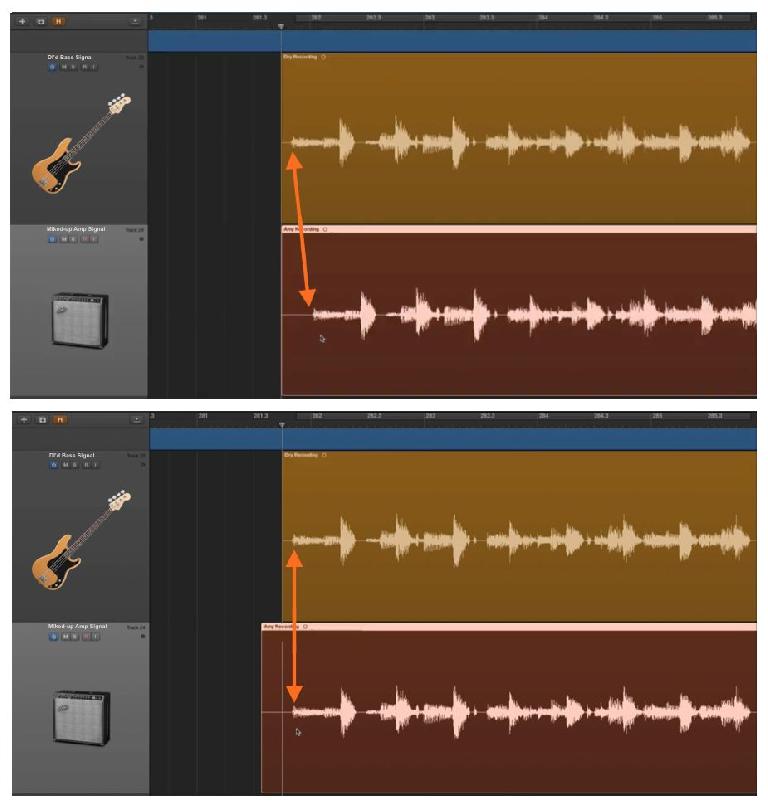 Obviously DI guitar and bass recordings will involve additional specific tweaking after-the-fact with amp sims and the like, but this article is just meant to focus on the initial capture of the performance, so I’ll stop here. Once again, capturing electric guitar and bass can be relatively straightforward—with just a little attention to the relevant details it should be easy to get excellent recorded tracks.