Language
Studio One 2.6 is here and PreSonus tell us the latest version adds new integration with StudioLive, AI-series mixers and SoundCloud. Find out more about the other enhancements in their press release.

PreSonus® is now shipping Studio One® 2.6, a significant upgrade to the company's award-winning digital audio workstation software for Mac and Windows that adds groundbreaking integration with PreSonus StudioLive™ AI-series mixers, Nimbit®, and SoundCloud™ and more than 50 other improvements and workflow enhancements.

When you launch Studio One 2.6, you'll immediately notice that the Start page has been enhanced. A new Nimbit dashboard on the Start page provides access to up-to-date Nimbit® user account statistics (number of fans, number of active promotions, and sales) directly from Studio One. In addition, the user receives help messages on how to engage with fans and customers and boost sales. A new SoundCloud™ dashboard displays key statistics from a user's SoundCloud account, as well as a scrolling display of the SoundCloud activity stream. 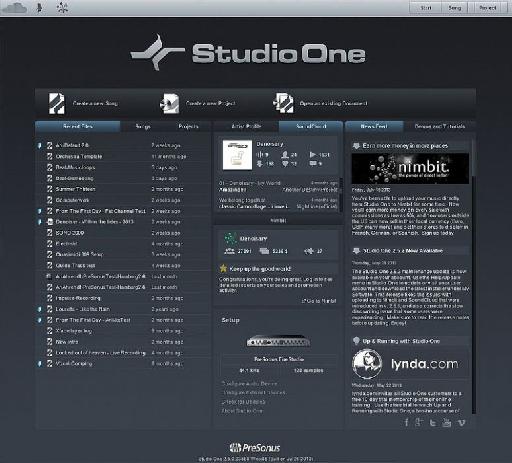 StudioLive AI-series mixer users will enjoy a special new connection with Studio One. When you record to the newly updated Capture™ 2.1, you can now save StudioLive AI mixer scenes along with your Capture audio. In Capture, this means you can play back audio through the mixer using the original scene that was in use during recording, even if it was recorded on a different StudioLive AI mixer. That's pretty cool but it's just the start.

When a Capture 2.1 session is opened in Studio One 2.6 Artist, Producer, or Professional, and a mix scene is present, all the fader, pan, mute, and Fat Channel settings for each track are automatically imported into Studio One. What makes this so great is the new Fat Channel Native Effects™ plug-in, which is a native version of the StudioLive 32.4.2AI mixer's Fat Channel, including the gate, compressor, limiter, and four-band fully parametric EQ. With the plug-in and the saved mixer scene, you can play your tracks using the same processing and settings that were being used during recording-even when you don't have a StudioLive mixer available. The Fat Channel presets are compatible with their StudioLive AI counterparts and can be exported from Studio One to a StudioLive AI mixer via Universal Control. The Fat Channel plug-in also is a regular Native Effects plug-in, so you can use its powerful processing on any of your Studio One tracks and mixes.

The metronome features have been enhanced significantly, including accent and offbeat click, convenient click-track rendering, custom click samples with drag-and-drop and menu options, and even save all metronome settings, including click sounds, as a preset. You also get a visual numerical count-in when you hit the Record button.

Version 2.6 also adds a long list of workflow and editing improvements, enhancements to the MIDI engine, and more. In fact, the update has so many enhancements and new features that we can't list most of them here.

Learn Studio One 2 with these video tutorials.