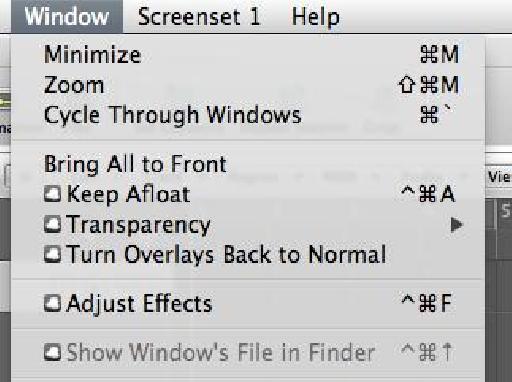 Power-User Tip: Enable any window as a floating window in Logic 9!

Language
I'm a sucker for trying out the latest utilities and applications for the Mac and I even featured a few of my favourites in my Advanced OS X 201 Snow Leopard tutorial. However, there were so many fr

I'm a sucker for trying out the latest utilities and applications for the Mac and I even featured a few of my favourites in my Advanced OS X 201 Snow Leopard tutorial. However, there were so many free utilities "floating" around vying for my attention that I simply didn't have time to include or test them all out - and of course, some of them became nothing more than another forgotten addition to my Downloads folder. Thankfully, the other day, a member of the macProVideo.com forums, Mojave, reminded me about one of these, AFloat. At the same time I was asked about the ability to make any of the Editing windows in Logic into a floating window (always on top regardless of whether it is active or inactive). My usual answer to this question is '...the Environment window and Lists windows are the only main editing windows that can float above the rest.... back in the days of Logic 7.... the good ol' days... when most windows could float... yada yada yada...'

I then decided to investigate further and thanks to Mojave uncovered Afloat buried deep in the recesses of my Downloads folder. You can download it for Leopard and Snow Leopard here.

So what does Afloat do? Simply put, it is a free window management utility that works for most applications. Once installed you can designate the selected window as a floating window, pin a window to the desktop, adjust the opacity / transparency of a window and much more. Did I mention it's free?

I was half expecting AFloat to work well with iChat, Safari, etc, but not Logic. Happily I was wrong, which is why I'm typing as fast as my excited fingers will allow so I can share this tip with you!

OK. Let's start with simple window management techniques in Logic 9. From Logic's Window Menu you can open a variety of the main Editing windows in a new window. e.g. the Mixer window. From the Window menu choose Mixer and then open the Event List too. The Mixer is a standard window. When active it is on top of other windows. When inactive (click on the Arrange are) it will disappear behind the selected window or it's toolbar will be grayed out. The Event List is a floating window, so even when it is not the active window, it will remain on top of all other non-floating windows. (See picture below). 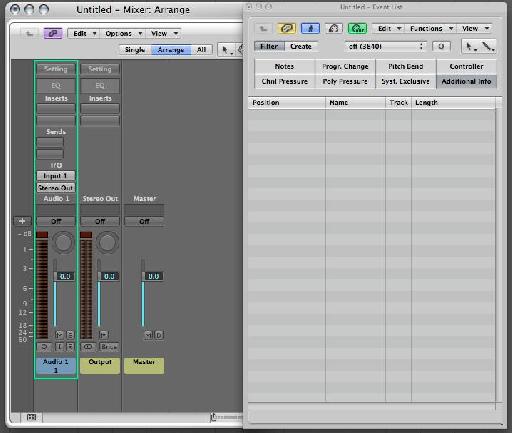 Floating windows can generally be distinguished by their squarer edges and miniature close, minimize and zoom buttons in the top left of the window's title bar.

Some windows are designed to float so that the information they display can always be seen no matter what area of the interface is selected. Personally, I'd like to have the ability to open any window in Logic as a floating window... but we'll get to that later!

Currently, the following windows in Logic 9.1.1 can 'float': (Thanks to Steve H for contributing to this list)...

But if you want the Mixer, Piano Roll, Sample Editor, Audio Bin, Score, Hyper Editor, Arrange, etc to remain always on top as floating windows you're out of luck. However, Logic 9 has powerful ways to create and lock Screensets and/or use a second monitor to help you navigate and see the most information you need when you need it.

When Logic 8 arrived one of the premium features lay in it's overhauled, simplified layout. The Consolidated window in Logic 8 and 9 allows you to open the main Editors and List within tabs. But more than that, many of the tabs can be "torn off" into a separate window.

Simply drag the Tab towards the Arrange area and release your mouse button once you see a new version of the window in view. 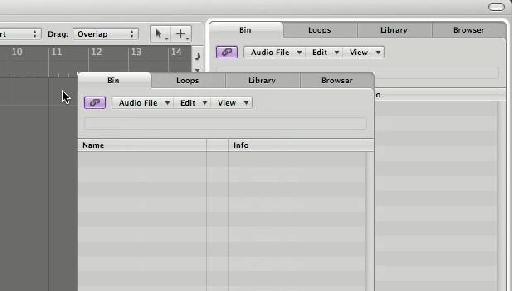 Unfortunately, most of these 'torn tab' windows become regular windows and cannot be made to stay on top, unless that is, you've got a copy of Afloat!

If you haven't already done so you can download Afloat from here. Once installed, restart Logic. Now open a regular no-floating window using any of the techniques above. 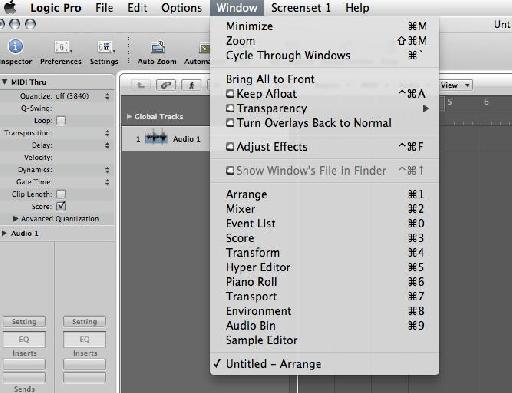 The selected window will now stay on top even when the Arrange window is selected! Notice, however, that the window doesn't show any visual indication that it is a floating window.

When applying Afloat operations to windows, make sure you have the desired window selected before making it float or disabling it's floating abilities.

A nice touch in Afloat is that you can adjust the transparency of any selected window, in a similar way tot eh Caps Lock Keyboard.

There are further options which may well change the way you work in Logic forever. Select a window, I've opened the Piano Roll and 'kept it afloat'. Now from the Window menu choose Adjust Effects. An HUD opens attached to the currently selected window. Here you have options that enable the Window type: Regular, Floating, Pinned to Desktop. 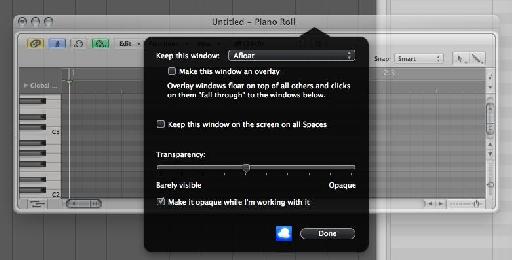 If you wish a window to remain in view only and don't require the ability to interact with it, make it an Overlay.

This window can be present on the screen in all Spaces.

The transparency can be set between barely visible and opaque. But the beauty here is a less opaque window can be made opaque when it is being worked on. So whenever the mouse cursor is over the window it become fully opaque. Move the mouse cursor away and whatever lies behind the Piano Roll can be viewed.

Staying afloat in Logic has never been easier or more fun - and although not built-in directly to Logic, Afloat can make any window in Logic float. Remember to try this out in your other favourite applications on your Mac.

Interested to learn more about Logic? These tutorials will help you to become proficient whether you are starting out or looking for advanced tips and tricks!

Boll
I'm trying to get it to work for Logic Pro X, and I'm not having any luck. Anyone else managed to get it working?