Being an electronic musician precludes you from street performance, right? Not at all! G.W Childs recounts his experiences of taking his setup to the streets, and shares some valuable tips.

I’ve always been curious about performing music on the street. I’ve always seen tons of violinists, guitarists, beat boxers and more, throwing it out there, having fun and sometimes making a little scratch on the side. However, as an electronic musician this has always been a little bit of a hurdle for me and many other people as I rely heavily on electricity! Thankfully the current electronic music industry has really been moving heavily over the last few years to smaller, more portable and battery powered devices of all sort to overcome this hurdle… mostly. This summer I decided to start playing some outdoor performances in my city, in public locations. Here’s what I’ve learned so far.

Device for Being Heard…

Simply purchasing a synthesizer with built-in speakers will not cut it in this day and age. If you’re going to play out in public places, you want to make sure you look into a speaker system that is designed to play outdoors, and in sometimes compact, tucked away places where people can still see the tip jar. Thankfully, there are many quality BlueTooth speakers out there which will work wonderfully for iOS based musicians who would like to be heard. But if you’re planning on bringing more than a few instruments of mass destruction from your private stock at home, mini-PAs like the Stageman 80 from Korg are a great bet as they offer multiple inputs for multiple devices. So if you decide you want to rock a few volcas while you jam or have a friend rap on a microphone,  portable, mini-PAs are also great because many of them, when you can find them, are battery powered too! 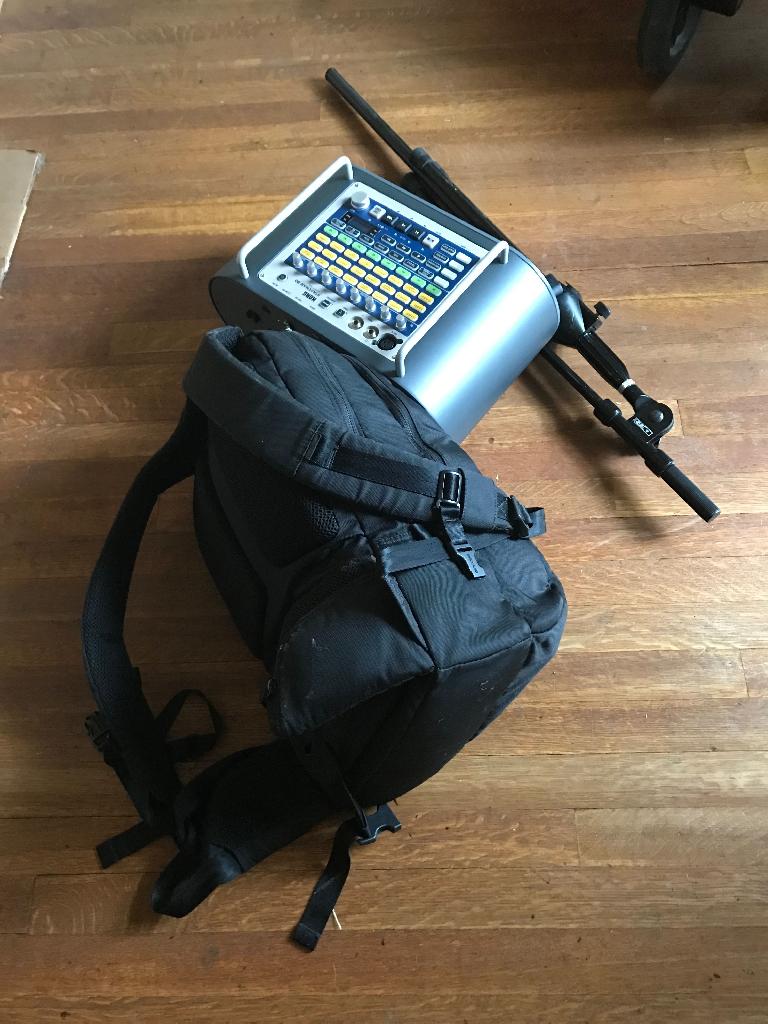 If purchasing something that big doesn’t appeal to you, or is prohibitive, a small battery powered amp connected to a small, battery powered mixer could definitely do the trick. Or even running your audio directly in to your car audio system! The latter being a wonderful way to get your music in on some tailgate, and beach parties! All car stereos have an audio input in some area of the car. Once you discover how to play your gear over your car speakers, roll on up to the party, pull out a table, connect your mixer to your car, and start jamming.

Remember, cars, trucks and vans all have massive internal batteries that can power your devices as well as amplify them through their internal speaker systems. There are many power converters designed for cars that let you run regular, indoor devices like synthesizers, mixers and anything that has a standard power cord, from the power of your car.

Also, an additional tactical perk from performing out of your car: you can get out quick if you need to! The fuzz, po-pos, heat, pigs, cops, or whatever you prefer to call them aren’t always the biggest fans of public music. It’s alway good to have an escape plan! Cars are pretty good for that. Just drive safe! 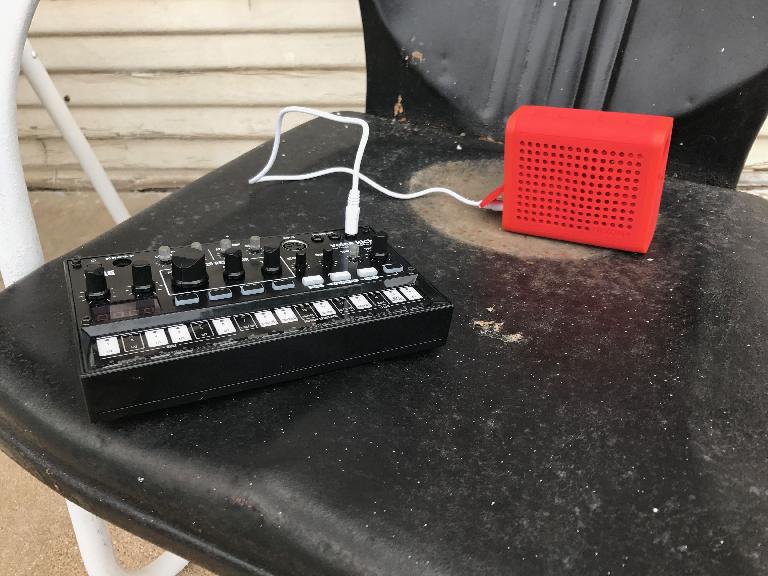 One thing I learned from doing audio in the US Army is that you never want to bring devices that cannot hold up in the environment that you’re currently working in. Remember: In the field, in a park, in a public place, where you’re playing under your own steam, people aren’t necessarily worried about bumping in to you, it can rain at any moment, and there are many other environmental factors like heat, wind, and so on. Spend some time with the devices you’re planning on taking out in to the wild with you before you make some big, spontaneous, bohemian performance somewhere. 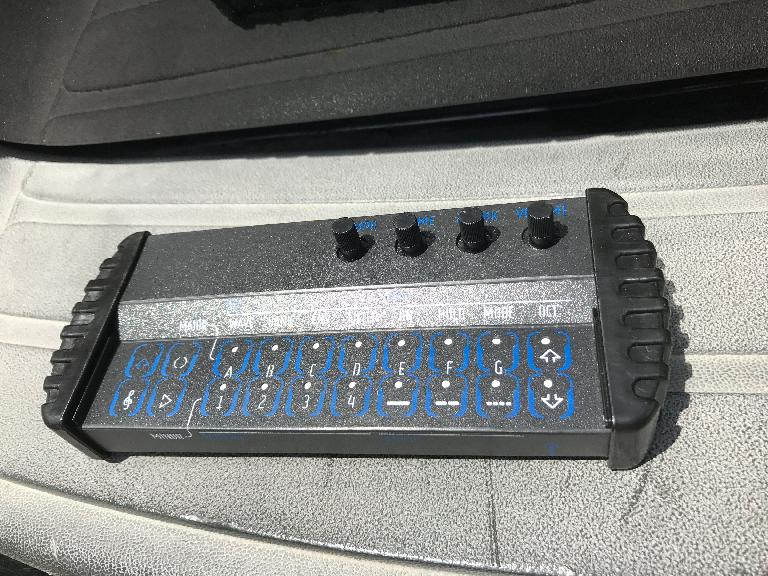 Another major consideration is the interface of the portable musical device you’re planning on using. If you’re going to be playing in sunlight, make sure you can see the LEDs, or that you’ve got some way to shade the devices so the LEDs can be seen. I played a gig recently where I could not see the LEDs of my volca, period. I had to go from memory to remember what the tempo was and what parameters were active. It was frustrating! Had I spent a little more time scouting my location and factoring in the weather I might have noticed a small nook in another area of the parking lot that I was performing in, that had shade! Environmental factors play a big role in outdoor performances. Let’s talk about environment now!

Despite common belief, simply rolling up and playing some music outdoors will not get you immediately harassed by the cops, if you are smart about where you set up. I look for places where I already know people in management, in the community, and in my neighborhood, so that I know things are okay before I get going. I have a friend who manages a coffee shop for example! In my arrangement with him, I don’t perform indoors because it’s too crowded. But I do jam out in the parking lot. There’s plenty of foot traffic. Because I’m okayed to be within their premises, the cops can’t mess with me! And still tip possibilities!

Park locations that are distant from neighborhoods can be a lot of fun too. The outdoors fuels music creation in a major way, and fuels the performance. People tend to listen in when performers get inspired. Though be careful about tip jars in parks. Some cities view outdoor performance as panhandling, and will sick the cops on you. Just make sure you check your local regulations and be smart. 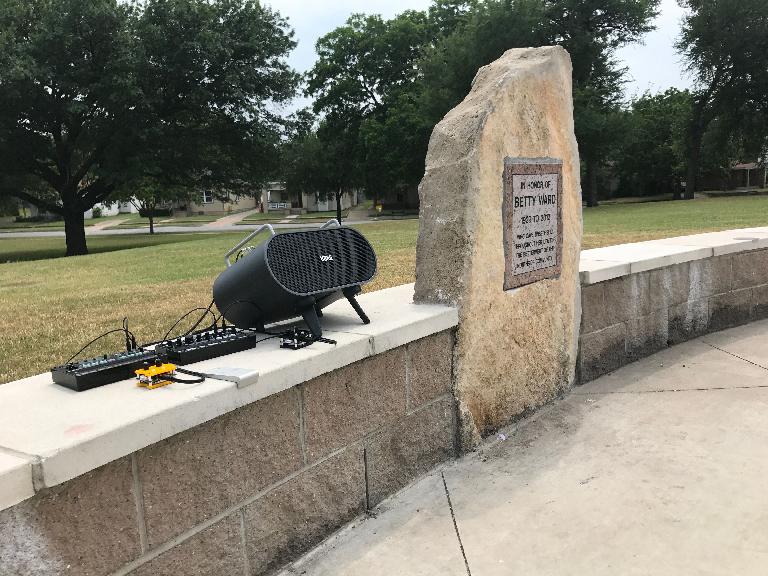 Regardless of whether you are new to music performed live or you are seasoned and you’ve never played as a street musician, there are some major benefits in at least attempting an exercise at some point in your musical career. The first major benefit that I felt I’d gained was confidence. It felt liberating to know that I could go out and perform anywhere, any day of the week, as long as weather permitted. Secondly, it felt great to be heard! To be able to perform, freestyle and see what created an audience. And to see what turned an audience away. There were many more benefits as I’m sure you can imagine. But to sum it up, I loved performing on the street and plan to continue on. With social media, it’s very easy to plan some impromptu shows, show up, and bring a built-in audience. With tools like Facebook Live, you can perform in cool locales, by yourself and still gain an audience that’s not physically there. How’s that for building a following?