On The Road: Portable Power Options For Synthesizers & Electronic Instruments

Gear that needs serious wattage can be tricky to power when you're away from the mains supply. But Scott Riesterer found some high powered solutions. Here, he shares his impressions.

Time To Get Outside

If you’ve read some of my other articles for Ask.Audio, you might already be aware that I put together my eurorack system with the intention of processing field recordings. At some point I decided it would be fun to connect a mic to my system and try processing environmental sounds in real-time. I set up my case on my balcony, aimed a shotgun mic at the nearby maple tree, put together a patch, and recorded a few takes.

It proved to be an interesting challenge, reacting to unexpected surges of wind rustling the leaves in the trees, loud passing vehicles, and the chirping of a crosswalk. Of course I realized that if I wanted to do this again in a different environment, I was going to have to acquire some kind of portable power supply. Researching and deciding what to get proved to be a confusing enough process that I thought it would be useful to share my experience as an article.

A big part of the inspiration for this project came from Anne Annie’s Modular Roadtrip on YouTube. If you haven’t come across it already, you should really check it out. In this series of videos, she perches her system within various beautiful landscapes and records it on location to produce equally beautiful pieces of ethereal ambient music that effectively evokes the setting. From creeping through the comments I learned that she originally had used a power pack made for jumping car batteries, then later switched to a Goal Zero Yeti 150. Similarly, on the Make Noise Instagram feed they posted some videos of systems used outdoors with the hashtag #vcenvironment. The comments there said that they were using a Paxcess unit for their 7U 208HP case.

I reached out to Anne Annie, and she was kind enough to share her experiences with the Goal Zero. She said that it can power her 6U 90HP case for two hours but has never actually run it until it died. She also offered the following: “My advice for a fellow field tripper is to sometimes take a step back, enjoy where you are and let it truly influence the music. Sounds a bit cheesy, but in my experience my field trips are always a bit of a mess. Working around battery times, weather, people giving you odd looks, camera angles etc, whilst trying to create a track can be a bit hectic.

I find I become most inspired when I let go of a solid ‘plan’ or my preconceived idea of where things are going and simply let the nature and my surroundings take me where they will.” Having filmed myself doing a few patches, I know how distracting it can be to worry about camera angles, lighting, and not blocking the shot with my arm, even in a controlled environment. Outdoors there’s even more factors out of your control, so I think it’s very good advice to slow down and make a point of reminding yourself that you’re doing this for fun in a setting meant to inspire you. She also let me know that she has a new album on the way, so it might be out on her Bandcamp page by the time you read this article.

Where To Go From Here?

Discovering the Goal Zero and Paxcess models at least gave me a starting point to begin my search. At least I knew that these two units would in theory work with my 7U 104HP Intellijel performance case. Unfortunately for me, neither seemed to be available in Canada. The Yeti 150 seemed to be out of stock everywhere, and Paxcess did not offer their products to the Great White North. This is where things got a little weird. While looking for alternatives, I couldn’t help but notice how many suspiciously similar products were out there. The Paxcess one in particular seemed to crop up under a number of different brand names. 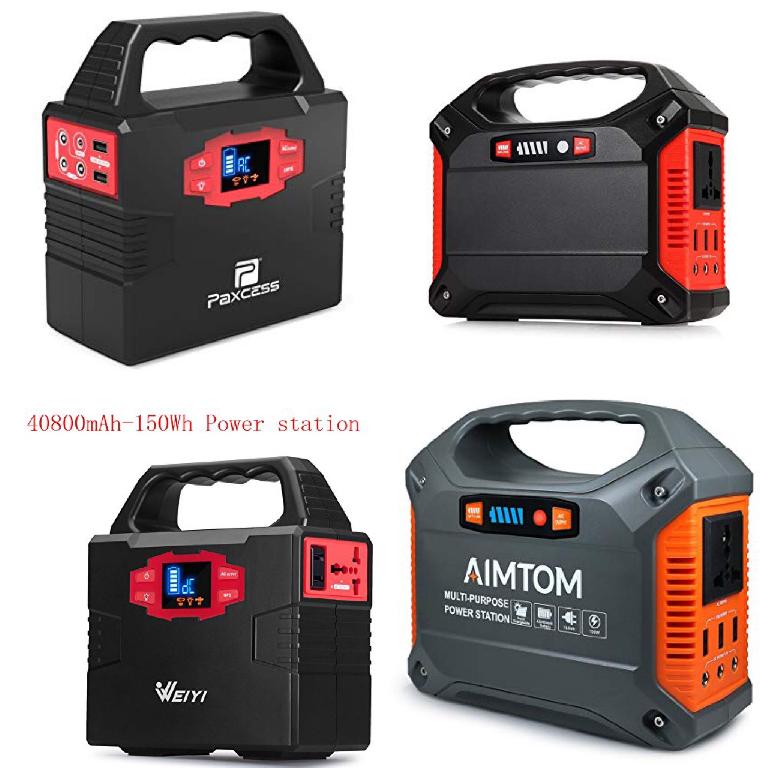 Taking my search to the forums confused me further. I found a number of threads where people were looking for almost the exact same solution as me and the responses were all over the map with very few satisfying or consistent resolutions. Many recommended the DIY approach to rig something up with a car battery, but my confidence to make something like this work in a reliable manner was very low. Others said that they owned the more high end Goal Zero portable power packs, but these seemed like overkill for my needs.

Some power packs boast that they feature a pure sine wave inverter that accurately matches the type of AC power provided by a standard home outlet. If they don’t specify this, they probably have a modified sine wave inverter. As usual, you pay a premium to get the pure stuff. The importance of a pure sine versus a modified sine in powering musical equipment was not something I was able to definitively determine. I’m sure a pure sine wave is better and would have less potential for noise but most of the warnings I found were regarding devices with AC motors and medical equipment.

Many of these power packs have DC outlets that look the same as the power inputs on your devices. Some only have these DC outlets, but I was more interested in getting something with an AC outlet for maximum flexibility. Using DC power is more energy efficient because a DC to AC conversion is not required.

Part of what makes searching for these products confusing is the fact that they are advertised based on their capacity, but this is sometimes measured in different metrics. The Yeti 150, for example has a 150 Watt Hour capacity. Meaning it can power a 1W device for 150 hours, or a 150W device for one hour. The examples given for how much power these units provide a device is usually given in number of cell phone or laptop charges, and rarely for length of time powering a device. Therefore, translating that into how long, or even if it could power my system took a bit more mental finesse than I was used to.

While my system uses a 90W power supply, it was pointed out that it will not draw nearly this much power while it is in use. The actual power consumption will be determined by the modules in the case and how they are being used. At this point I wanted to make sense of the specs and take some measurements to determine how much juice I would need, whether these units would provide it, and for how long. To obtain this information I bought a Kuman plug power meter and connected various devices and took readings. It was interesting seeing how much of an impact gain staging has on power consumption. For example, when I engaged the +6dB boost on all four channels of my Quad VCA I could see a noticeable jump. Based on my readings and calculations, I should be able to power my system for almost two hours.

The Moment Of Truth…

Whether you buy a product from Goal Zero or not, it’s worth spending some time on their website for their FAQs and articles. In my case I decided to go with the Aimtom 155Wh model because it was cheaper than the Goal Zero, and has a slimmer form with similar capacity. A clever feature on the Aimtom packs is that the outlet is designed to accept both North American and European wall plug connections. Once it arrived, I was pleased to discover that it fit in the front pouch of my Intellijel gig bag. This also brought the moment of truth where I actually tried using the device to power my system for the first time. 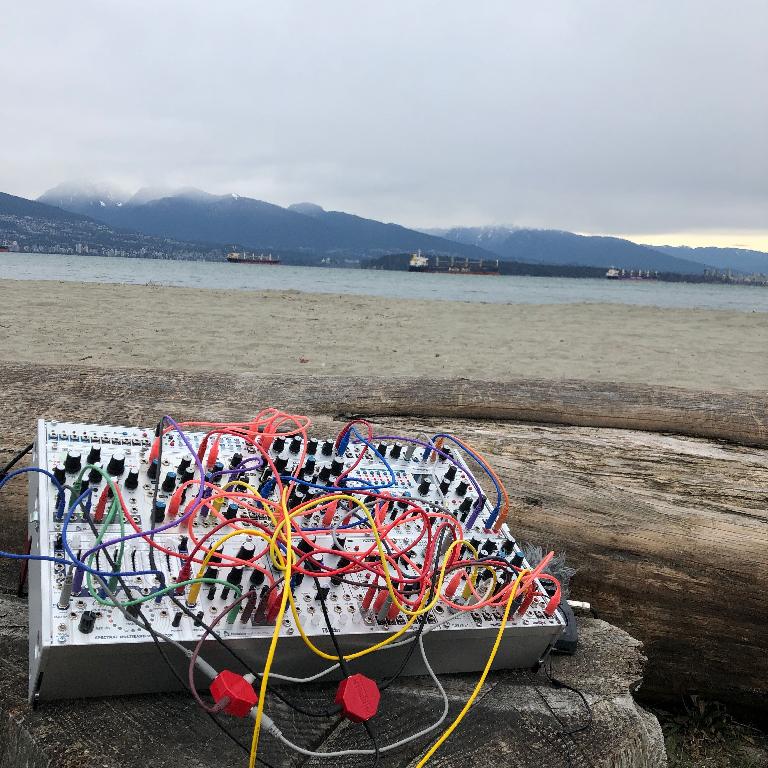 My decision to choose February as the month to try powering my system outdoors was not a wise one. You might remember that I mentioned I live in Canada? One interesting take away from my first portable experiment was learning how stiff the cables and knobs become in the cold. My second session was cut short when snow began to fall. Late January was unseasonably warm, so I was looking forward to getting out doors, but that was definitely a premature impulse.

The Aimtom power pack was able to successfully power my system, along with the preamp I needed for the shotgun microphone. I recorded everything into my Zoom H6 using battery power from four AAs. I did have a noise issue with my Intellijel Springray 2, using the small tank mounted inside my case. This tank is susceptible to noise at the best of times as it sits within the case and absorbs electronic interference, especially from digital modules. For that reason it was not a huge surprise that while using portable power the Springray had a far louder hum than usual. The unit does have a built in fan that kicks in if it gets too hot. So far it seems fairly quiet and pulses in short bursts.

If you’re interested in seeing the results of these remote recordings, I’ve posted these outdoor sessions as a Youtube playlist that I’m calling “Modular By Nature”. I’m hoping to do at least one of these each month in a different location. I’m sure my system will continue to evolve as I do them, and I’ll also get better at creating and performing patches that work best with these environmental sounds.

Portable power solutions are a growing trend, so I imagine new, better products will gradually come to market. As more people use battery packs to bring their gear out into the field, more user experience will arise regarding what to avoid. On the subject of things to avoid, battery packs over 100Wh unfortunately cannot be taken on a plane under FAA regulations. You will just have to make do with modular road trips, or train travel.

Since this is a subject that I would like to learn more about, I would love to hear from those of you using portable solutions to power your gear. What has worked, or not worked for you? Have you discovered any insidious causes of noise gremlins in your signal? Below I’ll provide a list of some of the options I’ve come across in the 150Wh range, but if I’ve missed anything please share models and links in the comments. 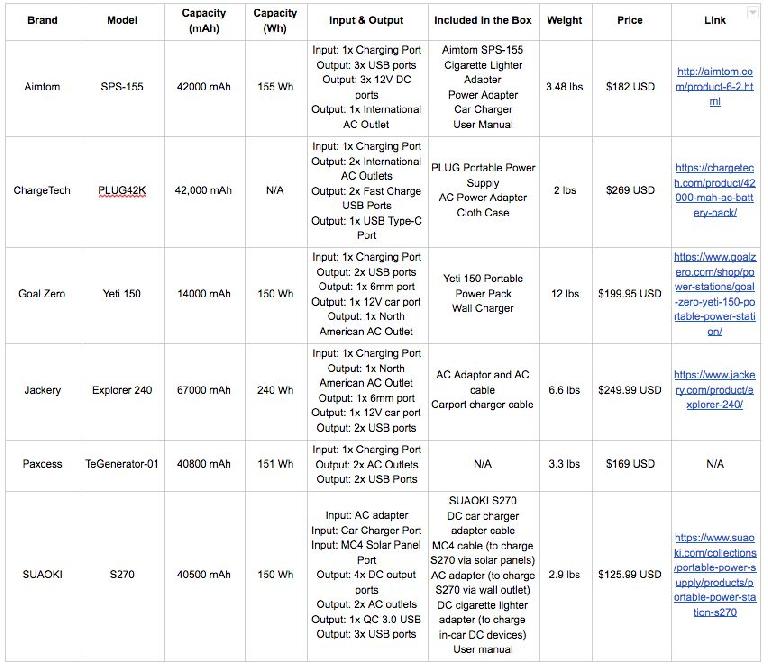 Audiodog
BTW - 'Anne Annie' is actually Ann Annie and isn't a she - its a guy called Eli... See latest DivKid video where Eli is interviewed. Great interview.
Scott Riesterer
Update: A friend of mine recently picked up this slim Aceyoon unit and it is able to power his 7U case and 4U Palette case for almost half the price of the Aimtom: https://www.amazon.ca/gp/product/B0745CZDDL/ref=ppx_yo_dt_b_asin_title_o01_s00?ie=UTF8&psc=1