Language
This clever, open-source tool, ReceiveMIDI, from Geert Bevin, makes it simple to monitor received MIDI messages from your command line on Mac, PC and Linux. But there's so much more this tool can do!

The awesome programmer behind the Moog Model 15 app and the software for LinnStrument, Geert Bevin has just announced his latest tool,the free ReceiveMIDI. It's a follow-up app to the super useful SendMIDI and as Geert says, "it felt only normal to create a similar tool for reciveing MIDI messages".

ReceiveMIDI, uses the JUCE library and is a multi-platform (MacOS, Windows and Linux) command-line tool that makes it easy to monitor MIDI messages sent from a MIDI device. "There are a series of handy filter commands if you just want to focus on some of the messages, and you can optionally add timestamps."

Geert has also updated SendMIDI so it now understands the timestamps, "allowing you to play back anything you saved and edited from ReceiveMIDI, with the appropriate timing". On the command line you can also use this to re-route MIDI easily by piping them together 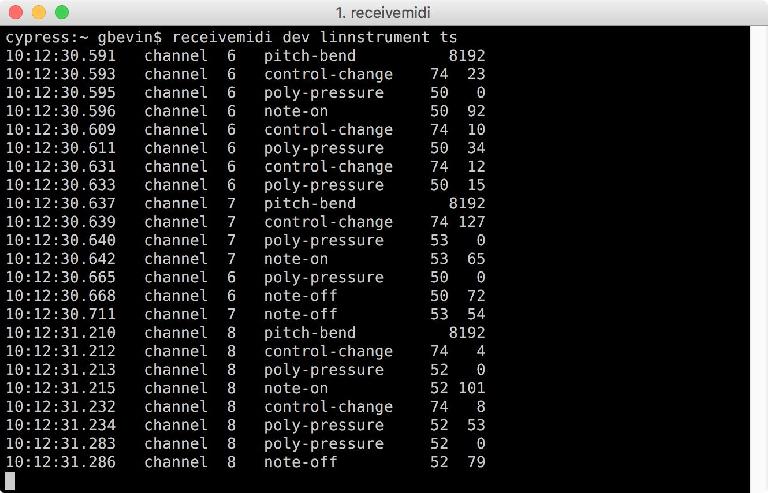 And here's something pretty exicting. ReceiveMIDI & SendMIDI can be used as a text-based sequencer! "The output of the ReceiveMIDI tool is compatible with the SendMIDI tool, allowing you to store MIDI message sequences and play them back later." You can edit the text step sequencer in any way you wish.

Geert has included a few examples on the Github page to get your started. Here's a couple to whet your appetite.

List all the available MIDI output ports on your system:

Receive only notes coming from LinnStrument:

Receive all messages from LinnStrument and pipe them to the SendMIDI tool in order to forward them to Bidule: