If you want a Bass Station 2 and a Circuit, you'd expect to have to buy both. But wait! The new Novation Circuit Mono Station combines the best of both in one box. Check out our hands-on video review.

Novation hasn’t exactly been sitting on its hands of late, with an expanding stable of hardware and updated software bringing expanded functionality to existing models. Circuit Mono Station is an entirely new product, born of two of the company’s best-loved units.

It’s a hybrid of the analog synth engine from the classic Bass Station II and the grid-based workflow of the Circuit. In many ways this approach makes a lot of sense: synths need sequencing and sequencers need something to generate sound from. Combining the two elements in a single box lets you integrate them in ways that are deeper and more seamless than is otherwise possible. 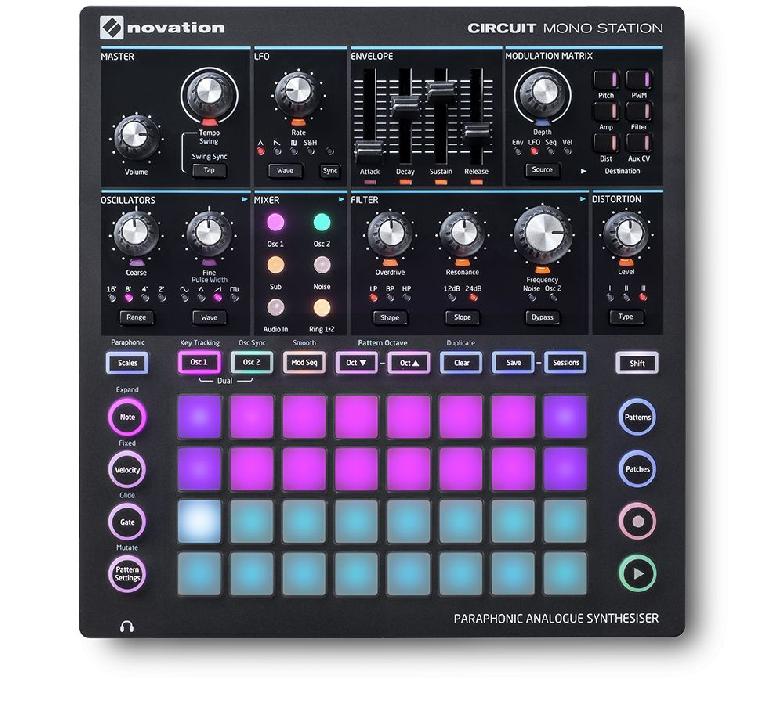 Circuit Mono Station is roughly the same size as the original Circuit, only now its main panel is divided differently: a more comprehensive synth section on the top, and the sequencer on the bottom. It needs mains power but also connects to your Mac or PC over USB to use the Components software for managing patches and other tasks that can be easier to do using software. A computer isn’t essential however, since the instrument is entirely self contained. You can play, tweak, save and load entirely in the box – although backing up patches will require a USB connection. 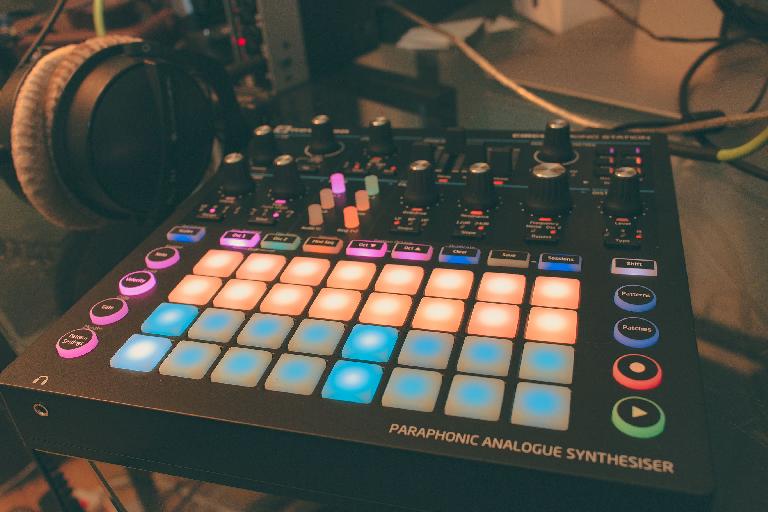 Also worth noting is that this model now has fairly extensive CV in and out ports on the rear panel so it will play nicely with your modular and other hardware, expanding its appeal to those who want to do more than just play the onboard synth engine. You get Note CV and Gate out, Aux CV, Clock in and out plus MIDI in, out and thru via the supplied adaptor. As well as a mono line out you also get an audio line input for processing external sounds through the onboard filter and effects, which is a nice touch. CV capability is becoming increasingly important thanks to the resurgence in interest around modular gear, and it’s a welcome addition here. There is a headphone out port on the front edge of the unit: it’s a mini jack, but this shouldn’t be a problem for most people.

The upper part of the front panel houses the analog synth controls. It’s paraphonic, which means it can produce multiple notes but they can’t be articulated independently. There are two oscillators here but they share one VCA and one VCF stage so although they can play different pitches, they can only both be heard when the VCA is triggered. There’s a shift+press to toggle this: you can set it to allow OSC1 ony to trigger the VCA, or have it triggered by either oscillator. What this means in practice is that you can make a part that sounds duophonic in the sense that two pitches can be triggered (but at the same time), letting you create more harmonic or melodic sequences than you would ordinarily get from an analog monosynth.

The two oscillators have coarse and fine tune, range and waveshape controls available in their dedicated section. The signal then passes to a mixer section that uses backlit dials to show how much of each signal is being used. You can control osc 1 and 2, sub, noise, ring and the audio input feed from here. It works really well and it’s easy to quickly mix and balance the different parts, knocking elements out or bringing more in to make the sound truly massive. It’s got an awesome character too, squelchy, fat and rich. And thanks to the tweakability it can be mangled to do anything from sharp hits to beats and of course those legendary fat basses. 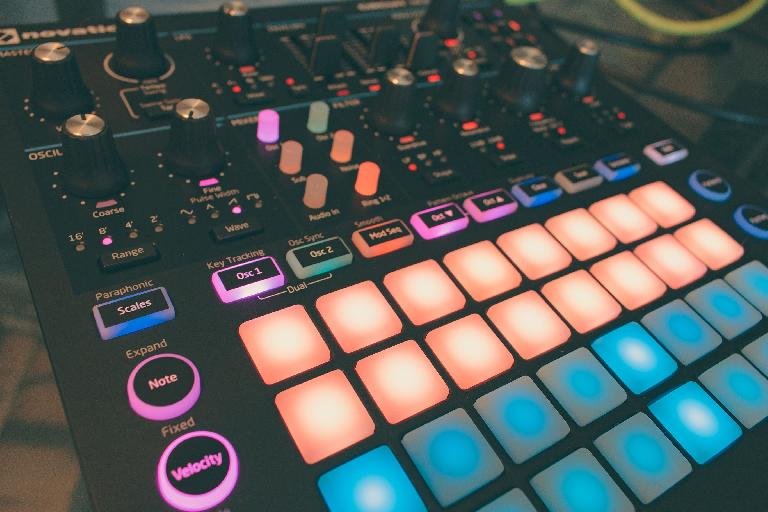 Next up is the filter section with overdrive, resonance and frequency knobs, plus selectable shape and slope options. A Distortion stage is available here for adding grit and punch to your sounds. Along the top, an ADSR envelope section has four sliders and there’s an LFO with waveshape and sync options. At the upper right corner, a modulation matrix provides 4 sources and 8 destinations, assignable by selecting the relevant buttons and turning the dial. Like many other controls, lights of varying intensity are used to denote feedback and status of parameters here. This is a nice way of compensating for the lack of a screen and although it takes a little acclimatisation, it’s a cool system.

Moving on to the sequencer, this actually has three elements: one track each per Osc plus a modulation sequencer track and you can change between these by pressing buttons. Along the left hand side are Note, Velocity and Gate buttons and entering these modes will cause the grid to display steps (below) and values per step (above) in different coloured lights. It works in realtime or step mode, although with higher tempos it’s easier to step sequence values as patterns can move along so quickly. Using the backlit pads to program, set levels, load patterns, patches and sessions takes a little getting used to but after a while you’ll become familiar with it. You can switch between scales and use the Shift button to access all manner of extra tools like Glide and Mutate to name just a couple.

You can also automate patterns using the grid system. The Osc 1 track allows real time recording of the automation of every top panel knob except in the Master section. The Osc 2 track will record those parameters that are in green when selecting the Osc 2 track. Using this functionality you can automate up to 51 parameters and record them all. The sequencer also has some enhanced abilities compared to Circuit, such as Fractional Gate, per-pattern sync rates and the ability to set start and end steps for patterns. The Mod sequence track as mentioned earlier works in a similar way, and allows you to set a per-step amount to send to any mod matrix destination including the Aux CV out to send to other hardware. 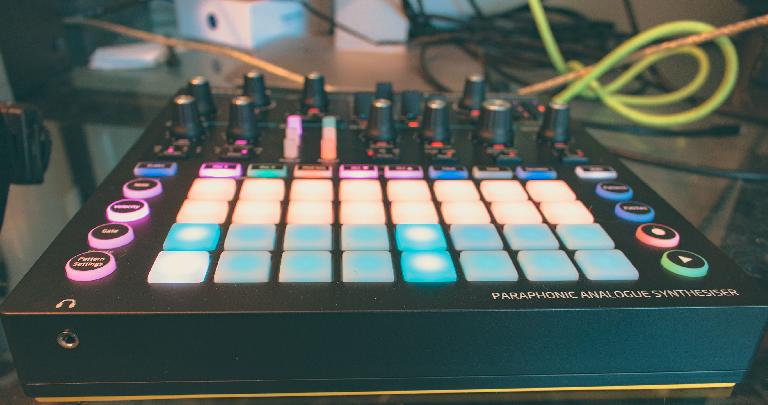 Circuit Mono Station is an incredibly fun and interesting concept: a powerful paraphonic mono synth, clever sequencing system and CV-capable box that can also process external signal. Use it as a sound module triggered externally, trigger it using the onboard sequencer, automate all kinds of parameters and modulation, assign modulation and mix the different parts of your signal together.

It’s different from Circuit of course, and to me it felt like more fun because the synth section is more hands-on and thus felt to me more like a “real” synth. Perhaps that’s unfair, but it’s just my gut reaction. The sequencer element will take a little learning if you’re not already familiar with Circuit, but it doesn’t take all that long. Good CV in and out capability is an added bonus and really opens up the instrument for incorporation into your wider studio setup. All in all, a great-sounding, fun and creative instrument with a bunch of potential uses.

Pros: Excellent hybrid of synth and sequencer that does both parts really well. Sounds massive. Paraphonic with 3 sequencer tracks. Clever light and pad-based programming and navigation. CV in and out. Audio input for use as FX processor. Insanely tweakable. Use without a computer if you like.

Cons: Using pads rather than a screen for visual feedback involves a moderate initial learning curve.