Find out how inspiring the new Nord Wave 2 keyboard synth really is in this in-depth review by music veteran, Matt Vanacoro.

I’ll be honest, I nearly stumbled and sprained my ankle *running* to the Nord Keyboards booth at NAMM this year when I heard the Wave 2 would be on display. I owned the original Nord Wave and liked it very much, but there was definitely room for some changes. After seeing what Nord could put into a keyboard with the Stage 3 and Electro 6, I was incredibly excited to see what Nord 2020 would be able to do with a reimagined Wave. I snagged a demo unit from Nord the second they were available and I’ve been quarantined with it (literally) for weeks. Let’s check it out.

The Vibe of the Wave

The idea behind the Nord Wave 2 is a bit different from most keyboards. At its heart, the Wave 2 is a 4 part synthesizer that allows you to mix engines to create some pretty big sounding instruments. You can combine virtual analog synthesis, sample playback, FM, and Wavetable synthesis all in a single patch. The synth practically reaches up and begs you to tweak the sounds, as Nord has always been guided by the ‘one knob per function’ paradigm. While the Wave 2 sports a few small OLED screens, the soul of this idea holds true on the Wave 2. If you want to adjust the filter, no need to dig into a menu. Want to add reverb? There’s a button for that. This synth is absolutely designed to be tinkered with before, after, and during your performance.

What’s more is that you can route the sample playback engine through a majority of the synth to truly mangle, warp, and punish the audio in surprisingly fun ways. Using a sample of a nylon string guitar as a sound source where you would have normally used a sine wave can yield some really crazy results. You can also augment your completely synth based patches by adding a layer of beautiful sampled sounds, and that also makes for some true versatility in sound design.

The Nuts and Bolts

The Wave 2 has 4 layers, each controllable by the front panel with easily visible faders. You have 48 voices to work with amongst those 4 layers, and those voices can be virtual analog, wavetable, FM, or sampler engines. In terms of the sample library, there is 1GB of space which may sound small but once you see how efficient Nord sampled instruments are you’ll realize this is actually quite a bit of space.

Each layer has its own EQ, Delay, Reverb, and effects system. The keyboard can be split in up to 3 places, and the keys themselves have aftertouch (which now interacts with the Nord Morph system for greater control). There’s a ‘fast assign’ function for the mod wheel that allows you to quickly map what the wheel does. The famous ‘pitch stick’ is ever present, and continues to be my personal favorite way to modulate pitch (although that is very subjective and divisive, I know).

There are 400 programmable memory locations for sounds, and the sound management is very simple to do - both on the keyboard and in the accompanying software. There is USB in and out for both MIDI and software control, 5 pin MIDI in and out, 1/4” unbalanced line level out, and a 1/4” headphone jack. You can connect a sustain pedal as well as a control pedal to the Wave 2.

There is a whole section devoted to morphing, and you can quickly assign just about any parameter to velocity, mod wheel, control pedal, or aftertouch. It’s nice to have physical buttons to do this, it makes controlling and tweaking the sounds much more intuitive than diving into a bunch of menus. You trade off a bit of higher end control this way (for example, there is only a single LFO and the routing options on it are only what could fit physically on the panel) as opposed to a touchscreen synth, but I was personally ok with it. WIth 4 different physical options for modulating sound at your fingertips, I was more than happy to tweak and program the presets.

Nord keyboards are metal and built like freaking tanks, and the Wave 2 is no exception. It’s lightweight, but definitely sturdy. The classic ‘Nord Red’ is still the theme here, although the end pieces of the synth have a beautiful ‘brushed metal’ look that function and feel far better (in my opinion) wood end pieces of the past. The mod wheel and pitch stick both are well constructed, and the buttons/knobs on the front panel are rugged and secure. The keyboard definitely feels pro, but is easy on the back with its light weight. I’m a fan of the 2 OLED screens, and I think they add much needed functionality without pushing the Wave 2 into the ‘workstation with a touchscreen’ category and betraying its DNA. The keyboard itself has 61 keys, and they are of the waterfall variety. They feel sleek and quite playable. 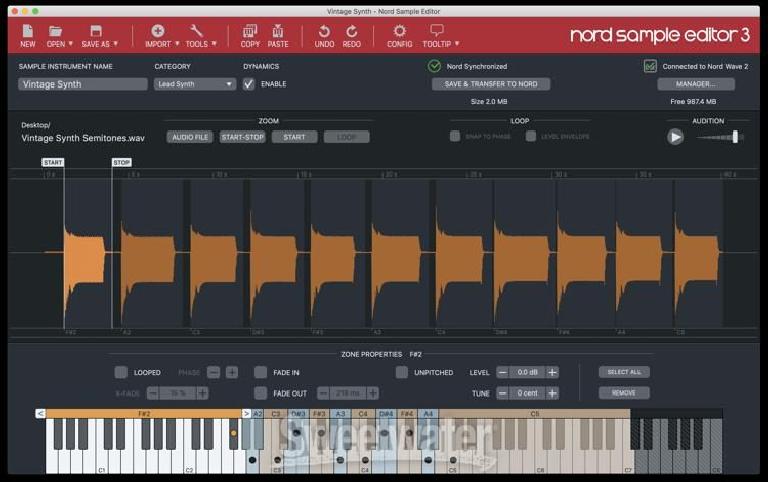 Nord’s software tools put just about every major keyboard manufacturer’s current offerings to shame. Both Nord Sample Editor and Nord Sound Manager have evolved so much since their inception, and to be honest they both worked quite well on day 1. Nord Sample Editor 3 is on the way, with a full fledged sampler and sound design package that looks amazing. I have used NSE2 for a while and have always been impressed with how small it can make sampled instruments that still sound stunning. The best thing I can say about both of these programs is that they really take the mystery out of every stage of managing your keyboard. It feels so much more like an ‘end to end’ experience. With other keyboards, you often have to use your own sampler, then your own sample converter to get the sounds into that ‘mystical perfect setting’ that your keyboard happens to use, then use some other third party sound management tool to save your samples as a ‘sound’ and upload to your keyboard. Nord obliterates this paradigm and makes the entire experience seamless with their software.

The presets on the Wave 2 come out swinging for sure. They’re big, they have tons of motion, and they really show off all the things the 4 layers can do for you. I’m a big fan of useful and well designed presets - not everyone has the time to dig in and tinker for every single sound before every single gig and being able to surf through the sounds by category easily is a plus. Here’s a few that grabbed my attention right away:

You can hear the morphing evolution that is programmable to the wheel, LFO, aftertouch, pedal… you name it. The lead sound modulates filter, resonance, pulse width, and eq all at once. The orchestral sound that changes from a simple flute to dramatic orchestration all with the touch of a wheel. Evolving is the key word here. The Wave 2 has evolved, and the presets show it in spades.

The Wave 2 was everything I had hoped for and more. Now, I know that I’m a self-described ‘Nord Fanboy’ but that doesn’t make this accomplishment diminished. I had very high hopes for the Wave 2 - some might say impossibly high. Nord gave me everything I need and a bunch of things I didn’t even know I wanted with the Wave 2. It’s an extremely well designed synth that is incredibly fun and sounds amazing.

Pros: 4 layers, dual OLED screens are subtle but useful, ‘one knob per function’ inspiration, morph and control options are diverse, well-designed presets, complex sounds possible with diverse engines, Nord software package is what EVERY keyboard should come with.

Cons: The price is what it is. We all wish it were lower, but this keyboard is worth every penny.