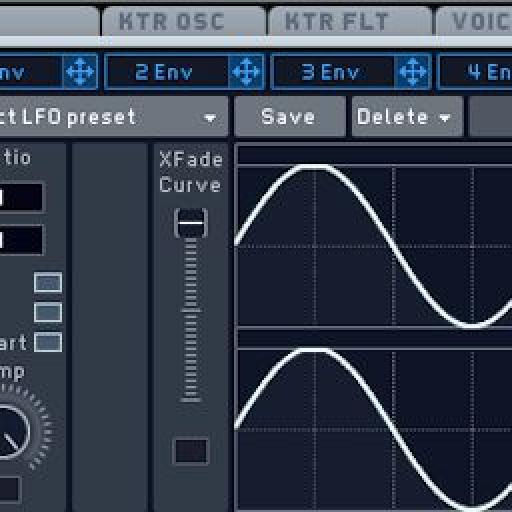 Language
Load up your DAW, open up Massive and be prepared to make some awesome sounds! Mo Volans show the ins and outs of creating sample and hold effects in this popular synth by Native Instruments.

Massive is an extremely flexible synth and is capable of producing classic and cutting-edge sounds. In this article we'll take a look at a classic sample and hold style patch pushed to the limit using Massive's awesome modulation system and effects processors.

In all honesty you could use just about any combination of oscillators to create a 'sample and hold' effect, as the real meat of the sound is taken care of in the filter section. You really have to ask yourself what character you want your patch to have. 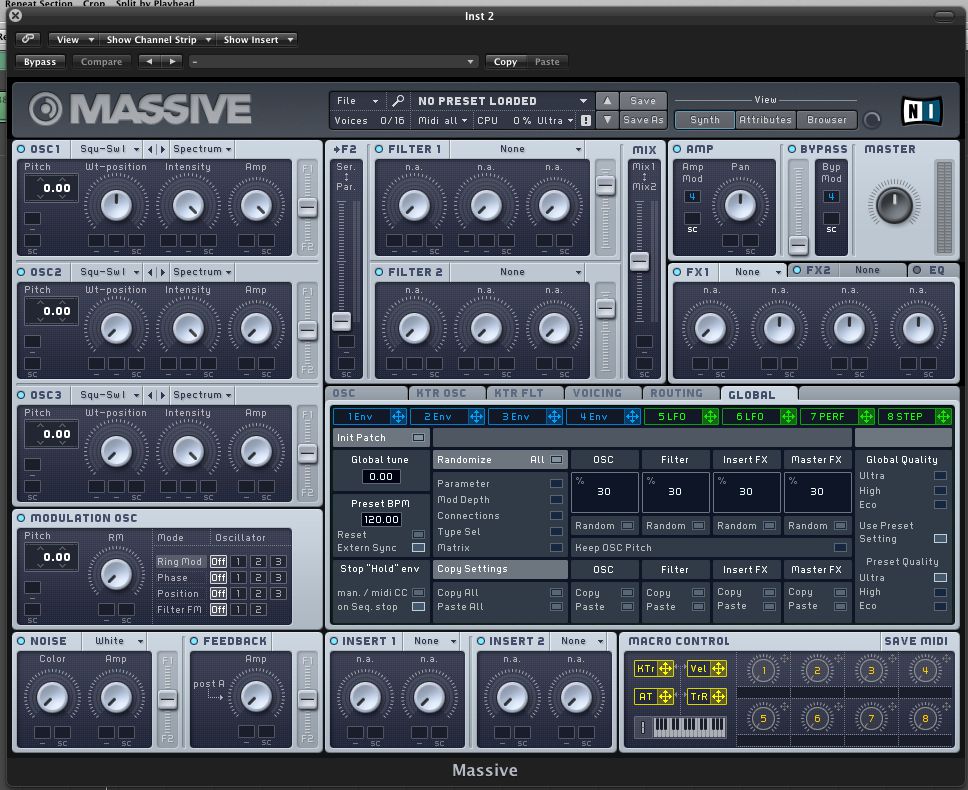 Massive in it's Default state

As Massive has such an extensive oscillator bank we can create just about any mood here. I have decided to try and produce something quite wide and edgy. To create this width I am going to use two de-tuned virtual analog saw waves.

I have also added a wavetable in the third oscillator slot to create some extra harmonics and add some edge to the sound. As already mentioned, the real body of this patch is created by using a modulated, resonant filter. Let's take a look at that now... 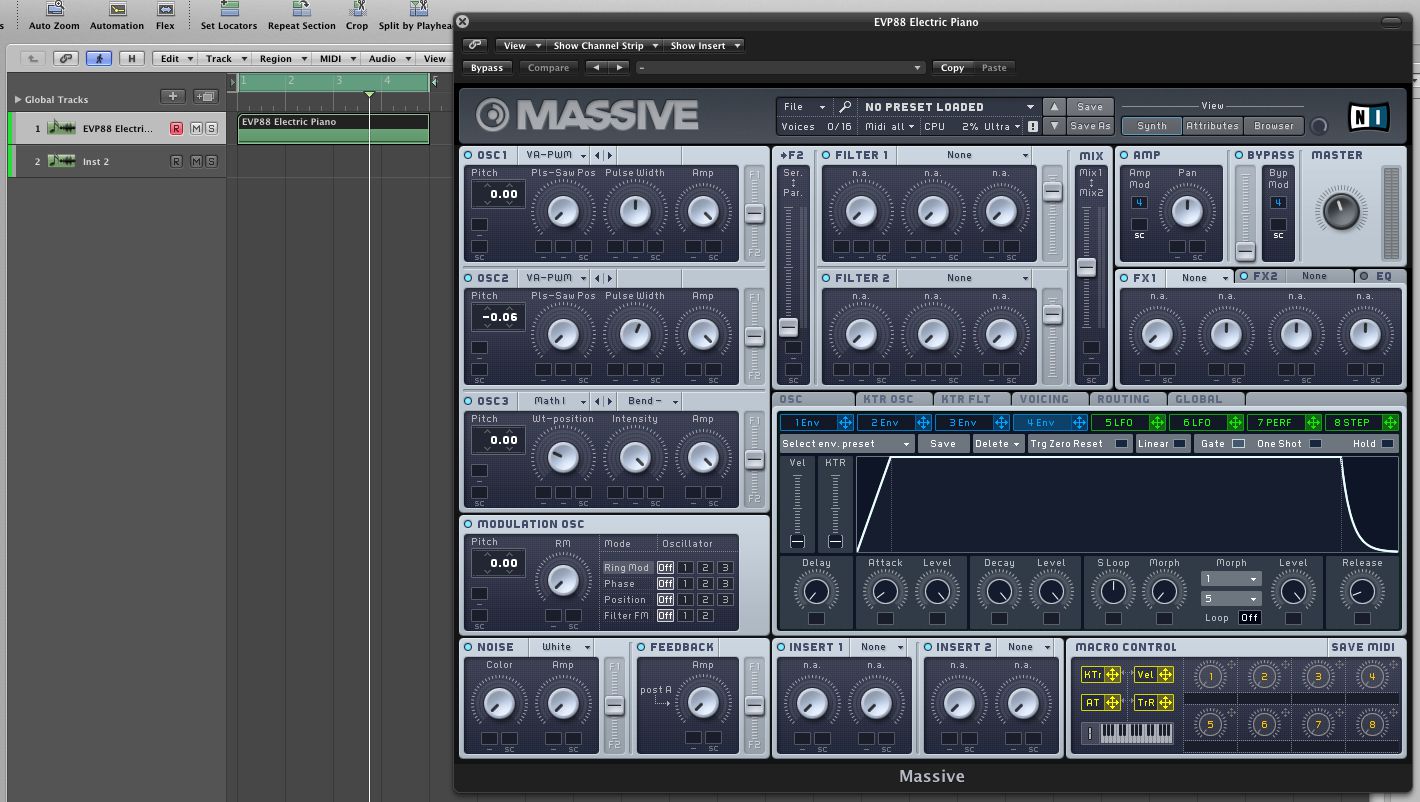 The oscillator set up

The basic oscillators play back:

Setting Up A Resonant Filter

For this patch I have opted for Massive's standard low pass filter model, there are now a few extra models to choose from but I find this one works very well for resonant effects. I have simply turned the frequency right down and added a heavy dose of resonance at this point. 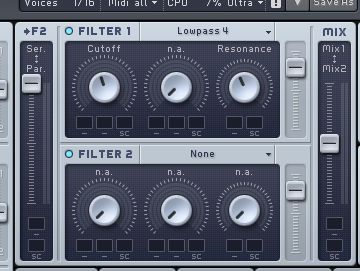 The oscillators are filtered

You can hear the filtered oscillators below and you can see the settings used in the screenshot. Of course at this point it's not exactly anything special as all the action happens when we add our modulation and that's exactly what we'll do next.

The simple filter in action:

If you are a relative beginner, or a newcomer to synthesis, you may not have heard of a 'sample and hold' effect. Essentially it is a resonant filter effect modulated by a random LFO. It was made popular by such tracks as 'Rez' by Underworld and is also used in many Sci-Fi style synth FX patches.

To achieve this simple effect we need to modulate our filter with a random-style LFO. As the LFOs in Massive actually use relative waveforms it's pretty tough to get a truly random sound from them, so in situations like this I like to use the 'Stepper'.

The stepper is programmed

The Stepper can work in place of an LFO or envelope as a modulation source and is very easy to apply to the filter (or any other destination for that matter). Simply select a stepper mod slot and drag it to the box below the filter cut-off. You can now slide this value up to ensure that the stepper takes effect. 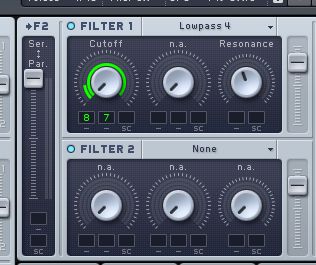 The stepper is used to modulate the filter

At this point you can go ahead and use the random button in the stepper module and it should generate a 16-step random pattern for you. Set the Sync to ON and set the timing to 1/16. Now let your part play back and you should hear the sample and hold effect in action.

You can now do a few things to make the effect a little easier on the ears. I like to add a second LFO to proceedings by dragging a free sine wave-based LFO to the other free slot in the filter. I have this running at 1/1 and add only a small amount. This adds a more random feel to the sequence.

You can also add a little sequence glide in the Stepper module. This smooths the transition between each step and acts almost like an envelope, resulting in a great effect on the filter.

The sample and hold effect comes to life:

Adding Effects And Some Extra Touches

Finally to bring this effect kicking and screaming into 2011 I've added some of Massive's very cool effects to the patch. Right at the top of the list is the Dimension Expander. This is a must for any serious Massive patch and works wonders on just about anything. A heavy dose of the Expander helps to give our patch space. 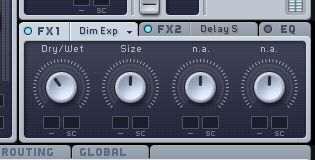 The Dimension Expander is called up

After this I added some timed delay running at 1/8th and 1/4th, this opens up the sequence and gives it a little pace. Notice I've kept the mix and feedback pretty low here to ensure that the whole thing doesn't become swamped. 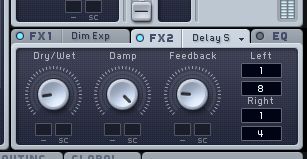 A touch of delay

A finishing touch was a small amount of Parabolic Shaper distortion. This adds some crunch, edge and attitude. The patch now sounds pretty good and all that needs to be done at this point is to save it as your own. 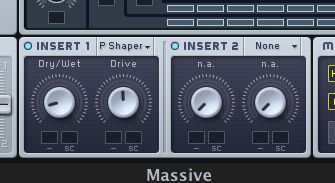 And finally some distortion

Try making your own and add extra LFOs and envelopes to make the effect even more interesting and unique.

The final patch plays back with effects added:

Massive is an intimidating instrument to master. Yet in your tutorials you explain the steps so intuitively.