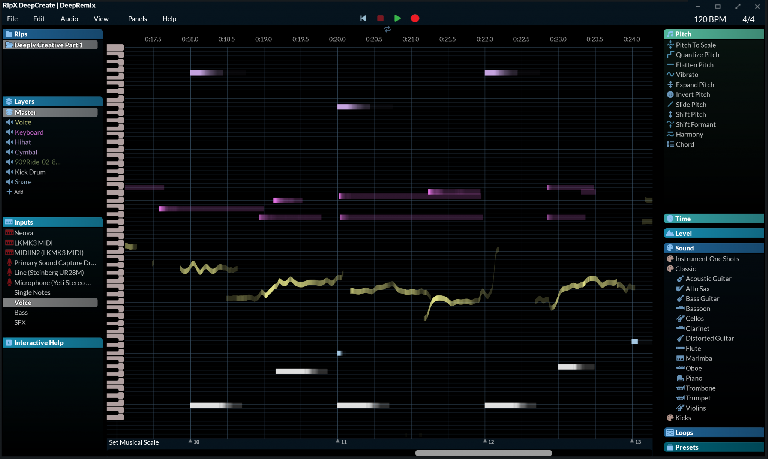 DeepCreate is a unique, easy-to-use, yet powerful audio system that inspires you to generate original ideas and create music from scratch using any instrument, MIDI/MPE controller, microphone or samples. DeepCreate integrates seamlessly with the DeepRemix stem separation & DeepAudio pro-editing and clean-up workflows. Use alongside your DAW or as a standalone app.

What you see is what you hear and once your music is inside DeepCreate, you won’t need to think about audio and MIDI - they become one, inspiring boundless creativity!

Whether you’re a musician, producer or audio professional - DeepCreate is a cutting-edge audio playground where anything goes. Connect a microphone, instrument, hardware synth or turntable; rip your audio files and favorite VST synth presets; import and auto-assign banks of samples to your MIDI/MPE device; practice and record parts; perform or draw in automation; add groundbreaking, fluid effects, create combos of those effects, and much more.

Better yet - DeepCreate comes preloaded with a variety of hand-picked instruments, percussion, SFX and loops to get you started.

Once your ideas have taken form, either complete your song within DeepCreate, or export the stems to your DAW.

To celebrate, Hit’n’Mix are offering 30% off the entire RipX module range in their Black Friday Sale which runs until 8th December 2022!

As a reminder, Hit’n’Mix invented the revolutionary Rip Audio format, which is as dynamic as MIDI, as well as having the full detail of audio recorded using microphone and other sources. All music, whether performed using a MIDI keyboard, MPE controller or ripped from an existing track ends up as Rip Audio in DeepCreate. This means that all DeepCreate effects and sounds can be applied to any sound, regardless of its source. What’s more, as Rip Audio works off the key ingredients of sound, such as pitch and timbre, it requires little audio processing to apply complex and dynamic effects, and it’s even possible to audition and see detailed changes to music on screen, before hitting play.

Martin Dawe, Hit’n’Mix CEO and the creator of RipX comments:

“After a few attempts at creating techno music when I was 14, I always wanted to get into music production, but frustratingly never found the time: I’ve run companies most of my life and, despite my technical background, I always found existing audio apps took too long to learn. For some time I’ve wondered whether a more intuitive system could be developed, based upon the Rip Audio format I created. Something more instinctual that could be used to write a complete song, but without complicated distractions or features hidden deep inside submenus. Something that felt like it was a companion rather than a workstation, that inspired experimentation and deep creativity.

“I’d like to introduce you to DeepCreate, the newest addition to our RipX Future Audio Platform, based on the Rip Audio format.”

RipX DeepCreate makes it possible to

RipX DeepCreate comes bundled with the award-winning DeepRemix module. Add-on the pro DeepAudio module for precision audio editing, and clean-up tools. For an additional $99/£79/€85, you get the full version of Audioshop (including tools such as Unpitched Editor, Harmonic Editor & Clone), Clean-Up & Repair effects, plus RipScripts (create your own tools).

More info can be found at https://hitnmix.com

What top professionals are saying about RipX

“RipX is to music production what the advent of sampling was to the industry when it was first introduced."

$198 for North America and the rest of the world

RipX DeepCreate LAUNCH SALE ADD-ON for DeepRemix (available via hitnmix.com ONLY (until 8th Dec) is: