Native vs Powered Processing For Music Producers: Stacking Them Up

In this head to head shootout, Matt Vanacoro pits his native plugs against DSP-powered models to see how the sound quality and CPU requirements compare.

In the last article I took a look at the conceptual difference between a ‘powered’ plugin and a ‘native’ one. If you’re not clear on the difference, knowing that is pretty much required reading to get a lot out of what follows - so bone up a bit here if you’re not solid! For those of you ready to see some ‘real world’ stats… read on!

Getting A Baseline… Without A Bass

Sorry about that dad joke there - but we’re talking about a different kind of baseline measurement here! I broke out my trusty old Taylor 714ce acoustic guitar, paired it up with a Neumann KM184, and went directly into the preamp of my audio interface (in this case, an Apollo 8p). I avoided any of my fancy preamps or channel strips upon input, and got the ‘barest’ sound I could. On my 2013 Mac Pro, Logic Pro took up 2.8% of CPU power when playing back sound with no plugins on that single track. You can hear the sound sample here

and see the Activity Monitor readout below. 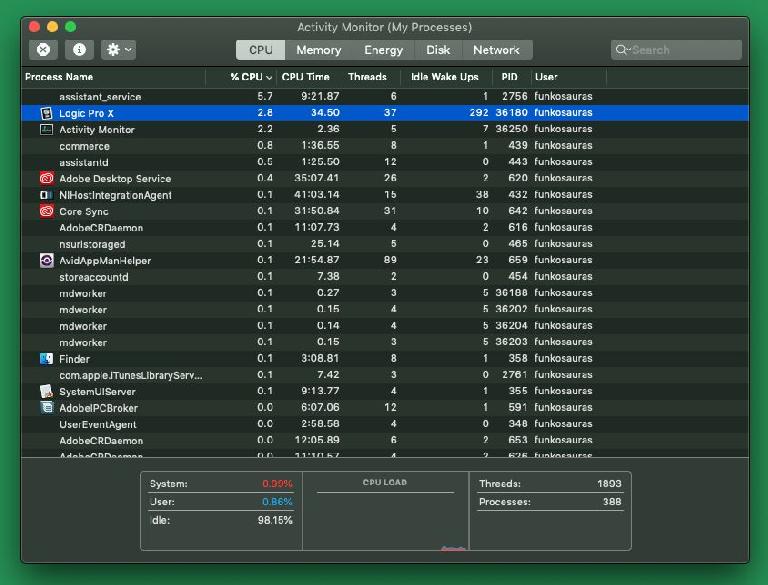 Logic’s built in ‘vintage tube EQ’ does its best to model the 2 Pultec Pro units commonly used in tandem to sculpt sound in many a major studio. They do a pretty damn fantastic job of this, as we’ve found out with previous testing. What I was interested in, however, is how much of a benefit do you really get by going powered vs running them ‘built in’ to Logic on your computer’s CPU?

Logic’s plugin is really 2 units in one, so in order to get a comparable test I had to load up 2 Universal Audio (powered) plugins in order to achieve the same effect. First, let’s look at the native plugin results:

As you can see, with some pretty simple and standard tweaks, we’ve jumped up from 2.8% to about 9% after a few measures of playback. Of course, as time goes on the figure jumps around a bit, but I took the screenshot after the amount stabilized for a bit. In terms of the sound, these settings provided a nice ‘sharpening’ of the edges that would help this acoustic stand out a bit more in the mix.

Next up, I loaded up the two Universal Audio Pulteq EQ plugins needed to replicate the same thing. After getting the settings comparable by adjusting the numbers exactly, I played back a bit, waited for the resources to stabilize, then took a screenshot.

As you can see, we’re definitely saving a bit of CPU power by offloading DSP to the audio interface here. At 4.6% (although it did quickly spike a bit higher to 6 for a short moment) we are at around half the CPU use of the native plugin. If you’re going to drop an EQ on each channel of a massive mix, that will definitely add up! You can hear the sonic result here:

In the end, I thought the powered EQ with the exact same settings sounded a little more ‘open’ to me, like the edges of the sound were carved out a little cleaner. That’s not to say a little more tweaking with the native version couldn’t get me there - it’s just where it wound up with the same settings.

I didn’t want to stick with Logic’s bulit in plugins for everything, and fortunately, thanks to NI, I didn’t have to. I called up Native Instruments/Softube’s recreation of an LA2A compressor - the VC2A. I tweaked the settings a bit until I was hovering around a nice ‘safe’ 2db of gain reduction. The CPU meter jumped up to about 16% as you can see below. Definitely more noticeable a ‘hit’ than the EQ for sure!

After loading up the powered equivalent, UA’s Teletronix LA-2A Silver, I realized I couldn’t use the dial settings to make a fair comparison - clearly the gain staging is a bit different between the 2 plugs. Once again, I adjusted the knobs until I had a fairly conservative setting of 2db average gain reduction. After playback stabilized, Activity Monitor showed about 8% of CPU resources used. This was pretty significant because the native plugin increased 13% with a single instance, while the powered equivalent only increased about 5%.

WIth several instances of compressors (and let’s be real here, some of y’all out there are using more than one compressor on just one instrument if you’re properly representing New York!) this would really add up over time. I’ve put the sonic equivalent below.

This one was really hard to call sonically - the same exact settings didn’t work as comparisons as the results were too vastly different. I personally found that I got to where I wanted to be with the powered version faster, but that’s not to say I couldn’t dial in the native equivalent a little better if I had to.

So what does it all mean? Well, in the end… it’s complicated! You can draw your own sonic conclusions by giving the examples a listen, but in the end - there are a few things I picked up from this little experiment:

1 - Powered plugins can most definitely save you a ton of CPU cycles. Even these two basic examples save a ton of power, imagine the really heavy duty ones like Amp Simulation or Room Simulation. You’re saving a bundle of CPU effort there. You will be able to run loads of these powerful plugins on an aging computer - a concept native can’t really can’t offer as efficiently.

2 - Native plugins such as the ones built into Logic Pro X are really getting better and better these days. They are coming quite close (or equivalent) to the powered versions that used to be the ‘only kids in town’ emulating vintage gear. Sonically, there are plugins included with your DAW these days that come quite close to processing only formerly available through 3rd party purchases.

3 -There are many ways to accomplish things sonically, and no one way is the perfect way for everyone. Don’t let anyone tell you otherwise. Do what works best for you.

Enkerli
Could go well with a PR, on a certain audio blog, about iCon Pro Audio releasing a new audio interface with â€œProVSTdriverâ€.
https://ask.audio/articles/icon-pro-audio-announces-platform-u22-vst-audio-interface
In fact, itâ€™d be quite useful to have a list of audio interfaces which can host plugins. UADâ€™s lines are quite special, but there are also some AIs which support VST, and thatâ€™s intriguing to some of us.