Language
Before we've even landed on the floor at NAMM 2016, Doepfer are announcing new eurorack modules! Read on to find out more.

With Winter NAMM 2016 right around the corner, there’s plenty of good news coming from the modular synth and eurorack makers. Doepfer have grabbed our attention by announcing updates and new modules before the show has even begun. 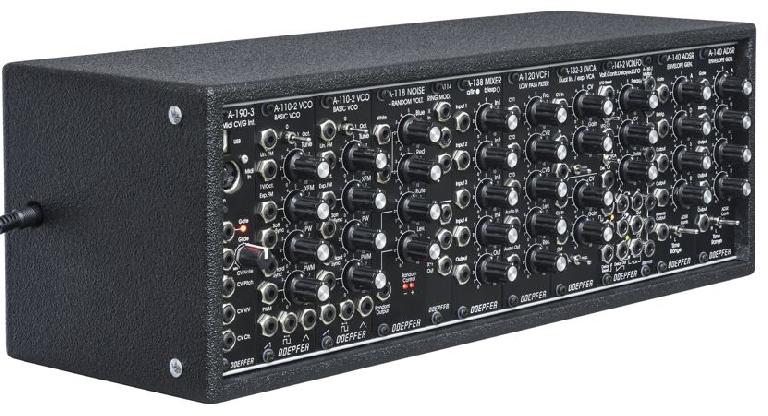 A-110-3 is a Thru Zero VCO with triangle core. The term "Thru-Zero" means that even "negative" frequencies are generated. But this a bit a misleading term as negative frequencies do not really exist. "Negative" means in this connection simply that the triangle wave will stop when the linear control voltage reaches 0V and continue with the opposite direction as the linear control voltage becomes negative and vice versa.

The A-110-6 Trapezoid Thru Zero Quadrature VCO

Doepfer tell us the “A-110-4 is a Trapezoid Thru Zero Quadrature VCO. The module is based on an idea by Donald Tillman from 2003 but has been revised for the use of modern electronic circuits (no OTAs/CA3280). Because of it's unique trapezoid core it's totally different compared to other VCOs. But the trapezoid core is not the only specialty: it is also a quadrature VCO and features linear thru zero frequency modulation.”

Module A-121 is a voltage-controlled multi-mode filter with a cut-off slope of -12 dB / octave. Four simultaneous outputs are available, each with different characteristics: low-pass, band-pass, high-pass and notch (or band reject). The cut-off frequency determines the point at which the respective filter effects appear. The frequency can be adjusted manually, or by voltage control (Filter modulation, for instance by an LFO or ADSR). Two CV inputs are available, whose control voltages are summed. Resonance (Emphasis or Q ) can be adjusted manually, or by voltage control, right up to self-oscillation, in which case it will behave like a sine wave oscillator.

Module A-168-1 is a pulsewidth modulation generator (PWM Module). It derives a rectangle signal with adjustable pulsewidth from an external triangle, sawtooth or sine wave. The external signal can be an LFO, VCO or any other signal with falling/rising slopes (e.g. ADSR). In addition the pulsewidth can be modulated by a CV signal (e.g. LFO or ADSR). The typical application is the generation of a rectangle signal with PWM from VCOs or LFOs which do not yet have this feature  (e.g. A-110-4, A-145, A-147-2, A-143-4, A-143-9).

Module price: €50 Euro and delivery is expected in February 2016.