iZotope's RX suite of audio repair modules is usually thought of as a post-production or mastering tool, but it has many music and mixing applications as well. Here are a few of them.

One obvious application for both music and post is vocal cleanup; whether spoken or sung, vocal tracks often present a number of familiar problems that may need to be addressed, and RX has several modules that do just that. 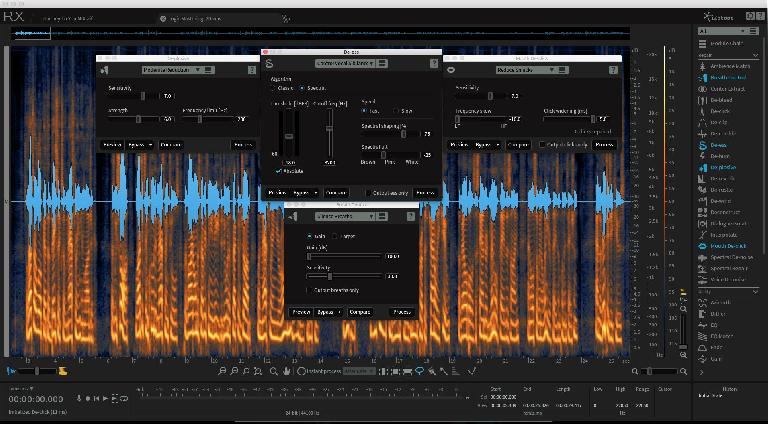 The De-plosive module automatically detects and eliminates plosives—also known as p-pops—the annoying bassy thumps that can occur on certain letters, like P and B. Removing them by hand is easy enough, but it can involve some tedious manual editing, like cutting the Region at each offending pop and fading in over the plosives to tame them. After a couple of simple settings, De-plosive does this automatically, saving lots of time over the course of an afflicted track.

The Breath Control module automates the process of removing breath sounds—or better, minimizing them without removing them entirely, for a more natural quality. Depending on the vocal performer and the mic setup/position, this might take a little experimentation to find just the right sensitivity settings to minimize breaths without softening some consonants too much, but if you don’t try to completely eliminate the breaths, it can work very well—again, saving a lot of time that would be better applied to more creative aspects of a mix.

RX offers no less than two de-clicking modules: the regular De-click, which is good for random clicks like from a vinyl record, and Mouth De-click, which is especially tuned for removing mouth clicks—those little lipsmacks that can be particularly difficult to edit out. This module does an exceptionally good job on these noises, without any noticeable adverse effect on the vocal itself.

RX’s De-clip addresses the universal problem of clipped audio—nowadays that could be audio that’s been clipped at the ADC—Analog-To-Digital Converter—resulting in the typically unpleasant digital distortion that can ruin an otherwise good take, an occasional problem when performers get a little more intense in a recording session after the level check. I’ve always followed the traditional warning that digital clipping should be considered a potentially unrecoverable error to be avoided at all costs, but I’ve thrown a number of tracks at De-clip and it’s handled them all easily, restoring clean, usable audio to even some really harsh clipped vocal tracks. 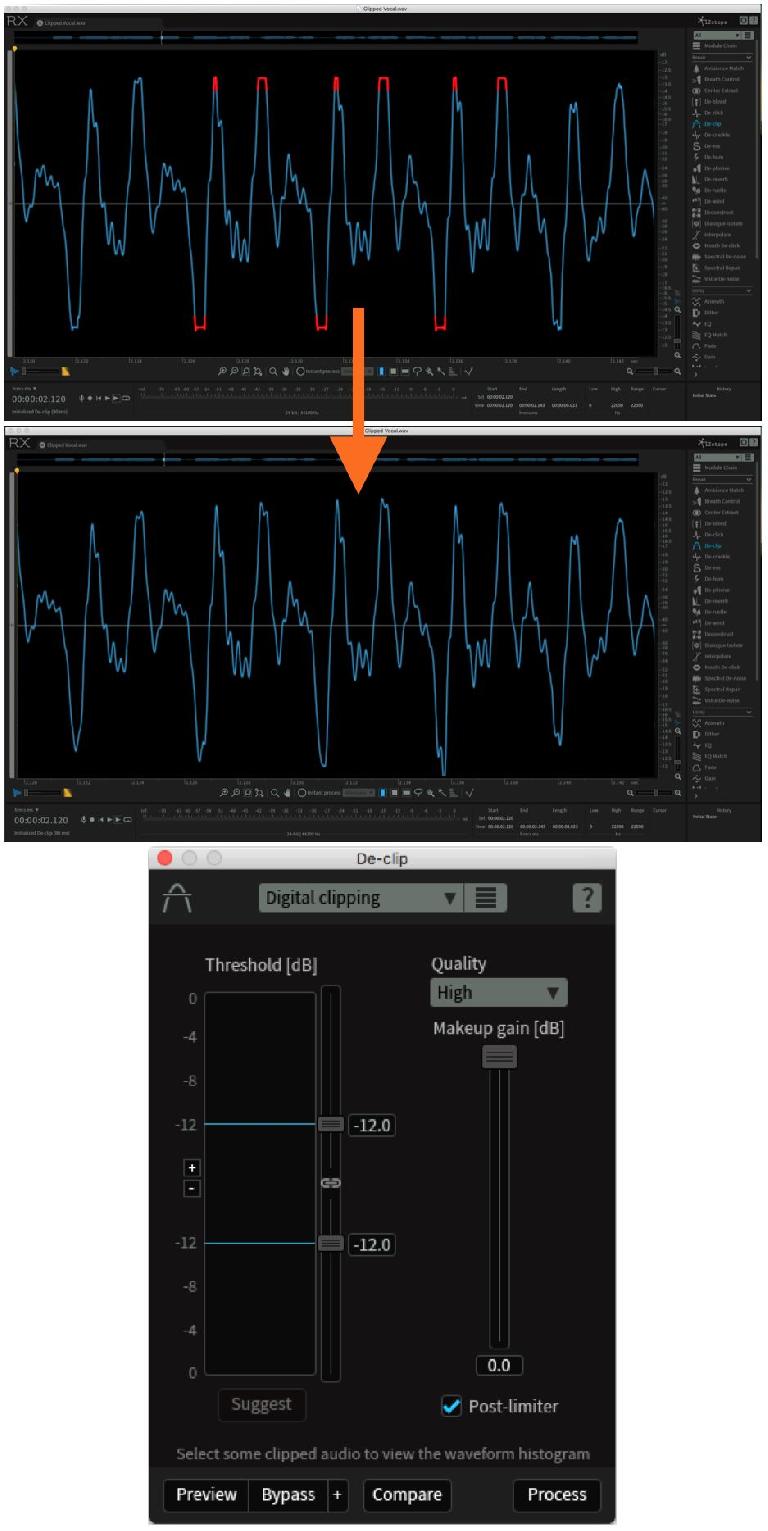 In modern music sessions many, if not most, tracks are close-miked and fairly dry, with reverb and ambience added at the mix stage, to taste. But sometimes a track may be overly ambient, and may not blend in properly in a mix that’s going for a tighter, more “studio” quality; or a vocal may pick up a little too much room tone, making it recede excessively into the mix. It’s much easier to add reverb than to take it away, but De-reverb addresses this issue, with surprisingly good results. 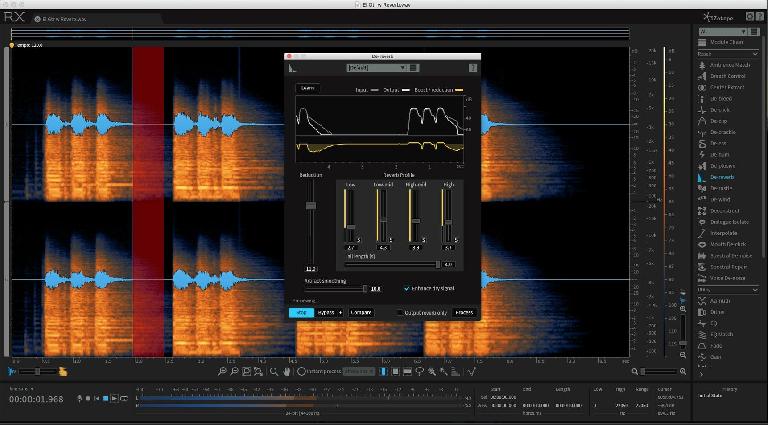 De-reverb can remove excessive ambience from a recording

As with some of RX’s other processors, Re-reverb does best when it can “learn” the reverb signal, ideally from a section of just reverb (like a long tail that defines the spectral content of the reverberation/ambience), but it does a credible job even when this isn’t possible. There are a few more controls here than in some of the other modules mentioned so far, and it may take a little more experimentation to get the best results while avoiding any artifacts of the processing, but I’ve been able to remove a fair bit of unwanted ambience from various guitars and other tracks, with suitably clean results.

Guitar with excess ambience; the same track with the ambience reduced by De-reverb

There’s also a module that will try to match the sound of ambience in one track to that in another track; this is probably less commonly needed in music projects than in post-production, but it could conceivably come in handy as well.

On occasion in a mix session, it may be necessary to apply EQ to a recording to match the overall tonal balance of another; a common application for this in mixing might be when comping a final track from multiple takes. It’s not unusual for the tone to change noticeably over the course of recording several takes of the same part—a vocalist may shift position on mic, or a guitarist may fiddle with pickup selection or the amp’s tone controls for example. When the comp is made, some sections that are chosen may stick out due to these small tonal variances, and it can be a bit of a pain to get the tone to match closely enough so that the different edits in the comp won’t call attention to themselves.

RX’s EQ Match module is designed to make short work of this. Once again, there’s a learning process employed—the module first “learns” (analyzes) the tonal signature of the target file, then also analyzes the audio to be EQ’d, and applies EQ to it to match the desired tonality. It’s all automatic, but there is a control for  determining the amount—the strength—of the applied EQ curve, which can be a great help in smoothing out what could otherwise be an overly sharp tonal change. 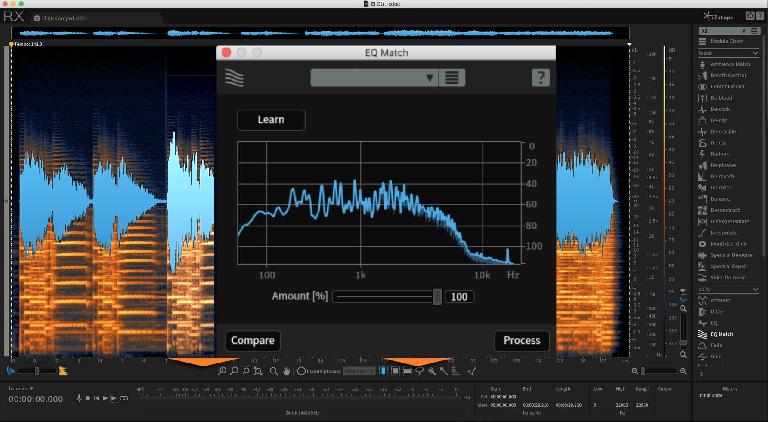 The most well-known of RX’s processing tools has always been its Spectral Repair module - actually there are several modules that can be used to remove unwanted sounds buried within an audio recording. Once again, this is a universal problem—in music projects it might rear its ugly head as a siren that leaks into a vocal mic, a snare that shows up a little too strongly in a piano recording, or the cross-bleed between the vocal and acoustic guitar tracks of a singer who needs to play and sing together. There are also more ambient sounds that may compromise a recording, like the hum of an air-conditioner.

Several modules in RX can be applied to these common problems: De-hum selectively filters out AC hum—up to eight harmonics’ worth—even on bass tracks, without a noticeable thinning of tone. And the Spectral De-noise and Voice De-noise modules both learn the spectrum of the unwanted noise—like the whiny whoosh of a window AC unit—and then remove it seamlessly from the track; Voice De-noise is specifically tuned to removing such noises from vocal tracks.

For more difficult problems, the main Spectral Repair module provides a full Spectrogram display, and lets the user draw out unwanted sounds graphically. Obviously this will likely be a bit more time-consuming, but it can often salvage a track that would otherwise be ready for the trash. When the unwanted sound is less-correlated—i.e. noiselike—than the main audio, the Deconstruct module may be able to handle it more automatically. 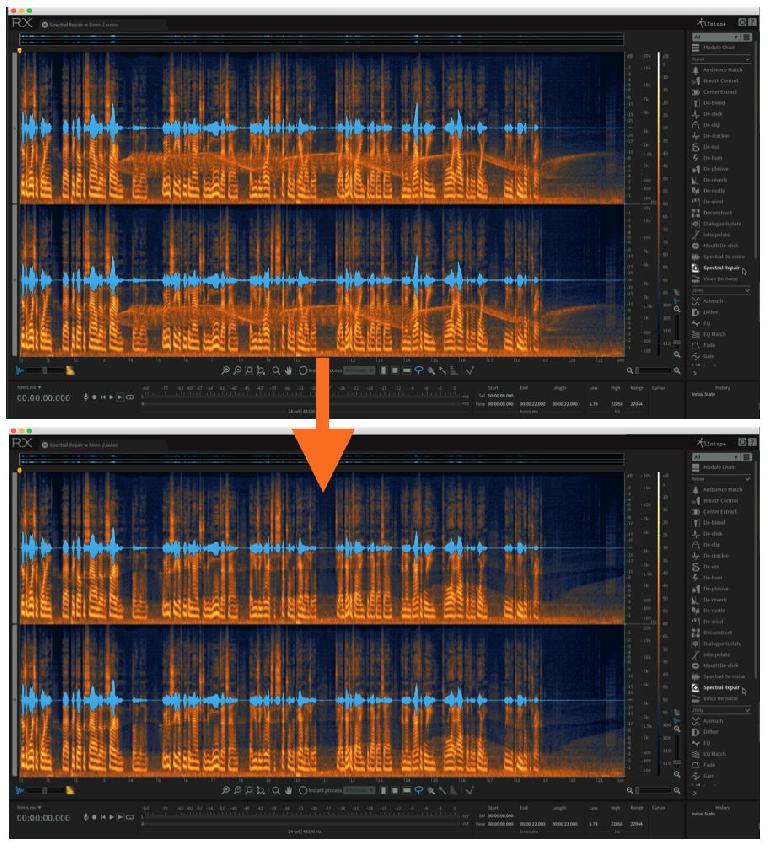 Finally, a potential issue for any music session is headphone bleed. As performers record with a mix of the track in their headphones, the familiar tst-tst-tst of sound leaking out of headphones not adequately sealed over the ears (for whatever reason) might be picked up by a close mic and intrude to an unacceptable degree on the recording. While a number of RX’s modules could try to address this, RX has one specifically geared to this exact problem—De-bleed. 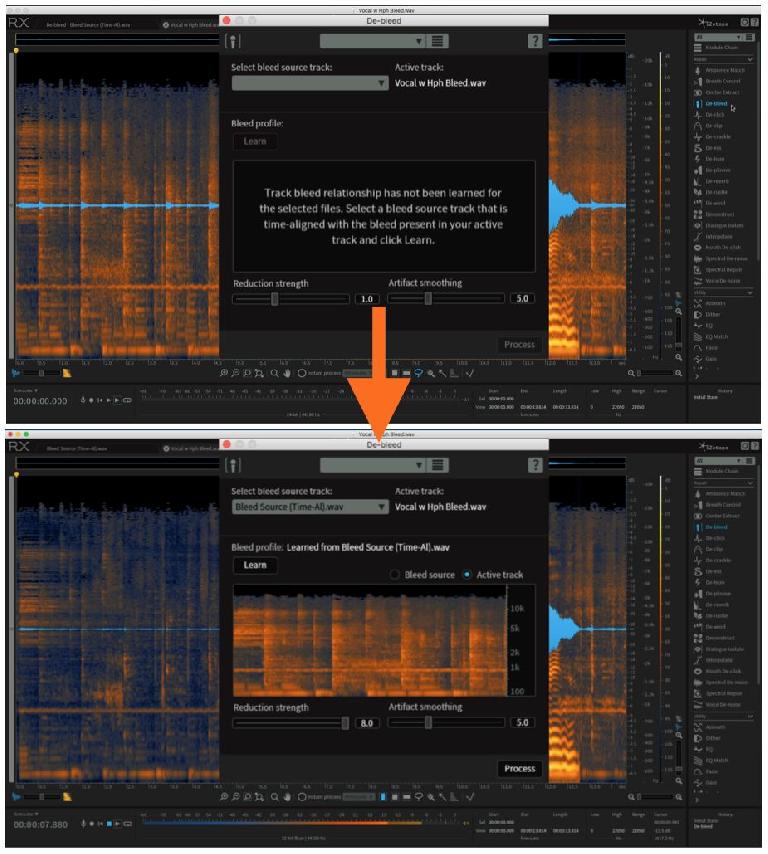 To make this work better than other modules that might attempt the same thing, De-bleed needs you to have access to the track that bled into the mic—that is, the track the performer was monitoring in the headphones that leaked into the recording. Ideally this would be applied while that exact headphone mix is still dialed up in the mixer, so De-bleed can learn it and then apply that to the task of removing it from the main audio in the recording.

However, I’ve tried it even well after the session, by approximating what I thought would have been in the monitor mix at the time the leakage occurred, and letting De-bleed learn that approximation, and it still worked quite well. You have to make sure that the reference track is more or less time-aligned with the leakage in the main track, which might involve doing a quick trim/edit to a copy, but this will help the process work much more effectively.

A vocal recording with headphone leakage; the same track after processing with De-bleed

RX has even more modules that might be pressed into service in a music session in special circumstances, but the ones described here could end up being mainstays for recordists and mixers who frequently need to clean up their tracks before delving into the creative aspects of the mix. Besides RX Advanced, which includes all the modules I’ve described here, iZotope has a couple of smaller bundles that make some of these modules available at a lower price point. Either way, with a few exceptions most of these processes won’t be found in your DAW, and they can sometimes save the day when technical problems threaten to get in the way of a great mix, so this kind of processing is definitely worth a good look.