Language
In part 2 of this mini-series exploring the Blues from a music theory perspective, Lynda Arnold shares two-handed exercises for keyboard and much more!

In part one of this series, I introduced the basic blues form with harmonic and melodic examples, including the common blues scale and mixolydian scales. In part two, I'll introduce a great two-handed blues exercise for keyboard and discuss some variations on the blues form including minor blues and Basic blues substitutions. Finally, I'll offer a few boogie bass line or left-hand keyboard variations to try in your productions or keyboard practice.

Get into the swing

One of the most important parts of the Blues is the feel. The eighth notes are most often swung instead of played evenly. It's important to practice this lilted feel when playing keyboard or bass parts in your sessions. I often use this exercise below to help warm up students on the shuffle inside the blues form with common keyboard voicings: 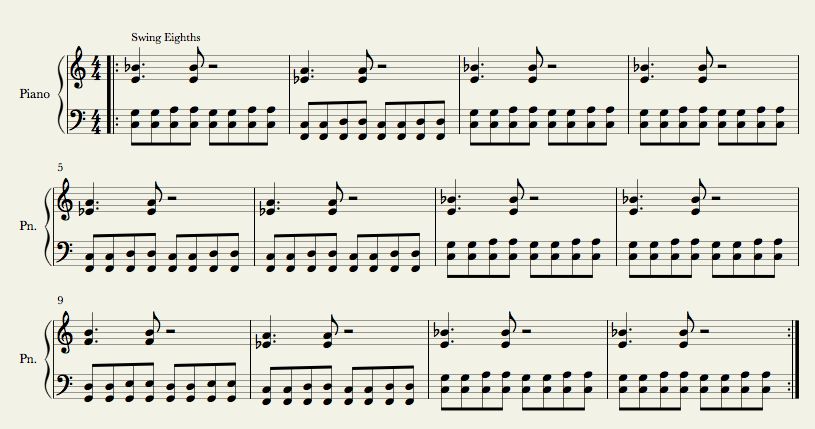 There are many ways to vary this example to build confidence on the keyboard. With this example as a guide, you will hopefully gain more confidence improvising on the form and make it uniquely your own.

Here are a few suggestions:

The more harmonic variations one finds in a blues piece, the closer the music gets to jazz. Jazz musicians and arrangers absorbed the blues as they continued their exploration into harmonic and melodic complexity. There are many tunes along this developmental track that keep the blues harmony as the base, but slide in some signature harmonic moves to take us elsewhere and add variety. Rock and Roll on the other hand, used the simplicity of the form as the perfect backdrop to write some of the most important popular music. The power of the singer-songwriter in this medium helped to keep the form alive.

My favorite example of the power and simplicity of the Blues form at work in popular music is Tracy Chapman's 'Give Me One Reason.' She uses common substitutions in her blues form and keeps it very authentic all the way around, never breaking from the form the entire song. The light groove and instrumentation make it easy for anyone to hear the changes.

The Blues doesn't always have dominant 7ths chords exclusively. In minor blues, the I and IV chords become minor 7th or 6th chords. The blues scale still works very well here because of the b3 and b7 already implied. In the example below, you'll see the minor i7 and iv7 chords replaced in the form. The other thing you'll notice is the substitution of a II-V-I for the bars 9–11. II-V-I is the prevailing chord progression found in Jazz. You can see the development of Jazz working its way into blues form below with the II-V-I substitution. I found a few Bb blues tunes in my collection by Red Garland, Sonny Rollins and Eric Alexander that use the same substitution to create variety. Another signature move that I came across in a few tunes, was the diminished IV chord after the IV chord, either in the 6th bar or as a quick passing chord after the IV chord in the 2nd bar. The latter example is not pictured below but used extensively in Count Basie blues arrangements. These are just a few examples and hopefully will peak your interest in exploring the possibilities further. The following example uses these variations in Bb minor: 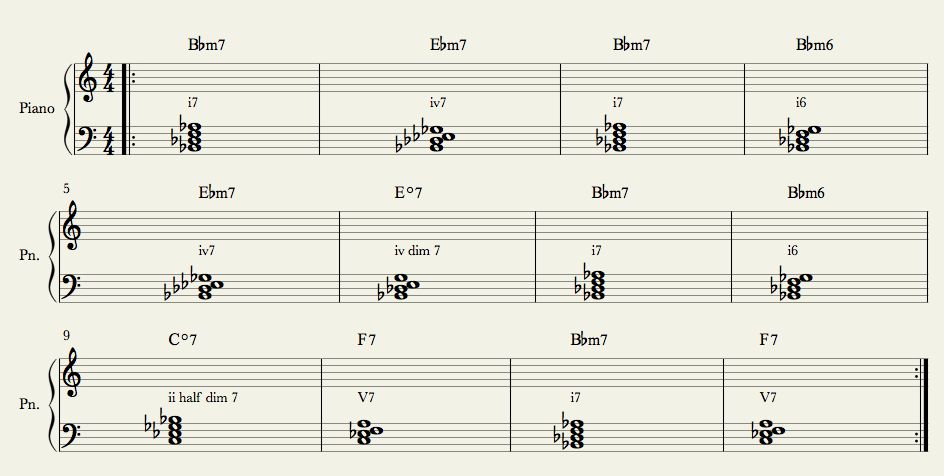 Harmonic Variations in the Blues Form.

Harmonic Variations in the Blues Form:

The most important thing to remember about these harmonic changes is to play the appropriate scale for the melody in those areas. In the II-V-I section, most notes of the blues scale will work, but it's probably a good idea to use the Dorian scale for soloing over the II chord (be careful of the half-diminished chord in this case since we are in minor). The IV diminished chord, in this case E dim, is a bit tricky. You can get through this by concentrating on the chord notes or using blues scale notes that don't clash with the chord. If you are really feeling adventurous, try the E whole/half dim scale: E F# G A Bb C Db D#.  This scale alternates whole and half steps (hence it's name).

There are many variations on left hand keyboard or bass patterns in Blues music. Many of these developed during the Boogie-woogie piano phase of the Blues, one of the earliest styles to emerge in the genre. Below are a few of those variations. You can use these as a two-handed exercise by playing chords in the right hand and the bass pattern in the left hand. In each example, I show what to play under each basic blues change: I, IV and V.

The development of the Blues is a fascinating study. I've only touched on a few important points in the past two articles. Hopefully, this has inspired you to investigate further and try some of the exercises.