Language
In part 1 of this mini-series exploring the Blues from a music theory perspective, Lynda Arnold explores its foundation and looks at harmonic and melodic variations of the 12-bar blues form.

In this article, I will introduce the basic 12-bar blues form and discuss common harmonic and melodic variations. I've found the study of the blues form useful for beginning improvisers as well as music producers who are struggling with chord progression ideas. Sometimes, it's hard for producers learning to sculpt arrangements to know where to begin, so I've often used the blues form in my production classes as a starting point. The blues is the rich musical tradition born in the American south that has grown and morphed over a hundred years into the many genres of music we listen to today including pop, rock, R&B, soul and jazz. So, understanding blues form as a player or composer can help you understand other song forms as well.

The basis of the 12 Bar Blues is made of 3 triads: The tonic chord, sub-dominant chord and the dominant chord. These are the major chords in a harmonized major scale. If we express this is in the key of C, then the I or tonic chord is C, the IV or sub-dominant chord is F and the V or dominant chord is G. Roman numerals are often used to express the number of the chord within a scale. As I continue, I will assume that you have basic knowledge of scale and chord theory. To make things a little easier for those of you who may be beginning theory learners, I will keep my examples around the key of C. 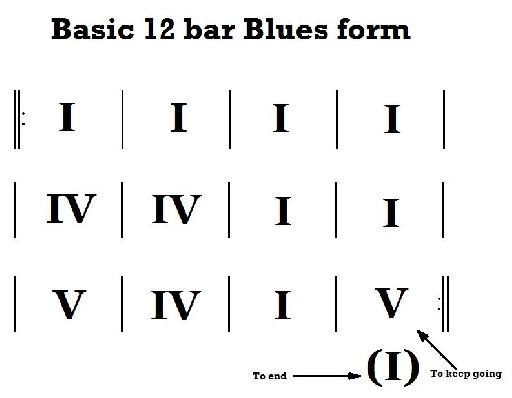 The 12 measures are structured as follows with one chord in each measure:

Now, the basic major triads work fine at first, especially for beginners. For piano players, you can start with triads as you get used to playing the chords with one hand and then add the melody in the right. When you add the blues scale as the melody, the triads still work quite well.

However, the standard for Blues harmony is the Dominant 7th chord. When you change all the chords to Dominant 7ths, the form looks like this:

The use of the dominant 7th chord takes home key out of C major and gives the blues progression a more ambiguous feel as it rides between major and minor. The dominant chord is constructed from the basic major triad above with an added minor 7th. The minor 7th is the interval that takes us to a different scale. This is enhanced further with the addition of the blues scale and dominant scales.

Let's look at the way the blues scale is constructed. The basis of the blues scale is the minor pentatonic scale that is constructed from a major scale with this formula: 1, b3, 4, 5, b7. In a minor pentatonic scale there are 5 notes (hence the name!) with the 3rd and 7th flat and the 2nd and 6th left out. In order to make this a blues scale, a #4 (or b5) is added above the root of the scale. So, the blues scale formula looks like this: 1, b3, 4, #4, 5, b7. The sound of the tri-tone gives the blues its signature melodic sound. This special note is also called the '˜blue note'. In the key of C, our blues scale is as follows: C, Eb, F, F#, G, Bb, C. The blues scale contains the minor 7th interval notes from our dominant 7th chords, so any melody created with this scale will fit nicely over the chord progression.  In fact, you can play any note in the scale at any time during the progression and it will sound good. This is a great place to start for musicians who want to improvise either on a solo instrument or on piano.

Listen to the Blues scale played over the Blues Form:

Although the blues scale works well and can be used exclusively, professional blues players access more than that to create masterful melodies and solos. In fact, they try not to use the blues scale all the time but offer up that coveted 'blue note' at an emotional high point in the solo or melody for example. It's definitely more challenging to incorporate the three dominant or mixolydian scales into a solo without sounding lost or too busy while soloing. The good news is, the scales share many common tones so you just have to be careful of which notes to stay away from over certain chords. Or, access the blues scale in those moments. The 2nd and the 6th of the scales are reintroduced in the dominant scales so that the soloist can express a full range of emotion.

Listen to the dominant scales played over the Blues form:

One of the most common variations is substituting the IV7 chord (or the F7 chord in the case) in the 2nd measure. Also, since the form often repeats many times during a performance, the V7 (or G7 chord in this case) can be used in the last measure to help carry the form back to the beginning (as you saw in Figure 1). In blues rock, the V7 is used in both the 9th and 10th measure instead of dropping to the IV chord sometimes. This is not demonstrated below but another variation to consider. Chromatic chord movement is used to spice up the chord progression. It's common for keyboard or guitar players to '˜slide' down a half step between the V and IV chords in the 9th and 10th measure as another way emphasize the chord change.

I would suggestion playing around with this form by setting up a simple beat in your DAW at a comfortable tempo and practice playing through the chords on your keyboard to get a feel for the changes. You can use two hands for the chords if you like or for more advanced players, play the chords (or at least root and 7th) in the left hand and improvise with the blues scale in the right.

In part two of this introduction to the Blues, I'll go deeper into variations on the form and discuss the role of the bass as it relates to the development of jazz, keyboard voicing techniques and melodic examples.

Charlie
This is good stuff for songwriters to play around with. Especially for those of us who fall into familiar patterns while writing and benefit from tools or exercises to explore new terrain. Just because it's "blues" doesn't mean the scales and progressions won't sound fresh with instrumentation and styles from other genres. definitely planning on seeing if I can incorporate any of this into my writing. Thanks