Language
Composing with tone rows is a very useful exercise for you to stretch your ears a little if you have only listened to tonal music, and it is fun as well. Jay Asher shows how in his revealing tutorial.

Twelve-tone music was invented in 1921 by Arnold Schoenberg and enthusiastically embraced by his students Alban Berg and Anton Webern among others. His feeling was that tonal music had been stretched to its limits by Wagner and Strauss, and that “free” atonal music lacked structure.

Many film composers including Leonard Rosenman, Jerry Goldsmith, Jerry Fielding, and Ernest Gold used tone rows as the basis for some of their scores.

The basic principal is to use all twelve tones roughly equally so that they are related only to each other and not to keys. (And yet, somehow Berg sounds more “melodic” than Schoenberg or Webern.)

In Pic 1, you can see a basic, or Prime, tone row. Notice that all 12 tones have been used with no note appearing twice.

In Pic 2, you see a Retrograde version of the note row, meaning it is the same notes in reversed order.

And finally in Pic 4, we have the inverted row in retrograde, known as the Retrograde Inversion.

Now Schoenberg, Berg, and Webern composed quite differently with these. Usually they assigned numerical values to each note, e.g., 0, 1, 2, etc. and formed matrixes to compose with. You can find information all over the internet about this. But for our purposes we are just trying to play with these in a musically interesting manner to stretch our ears a little.

One common misconception is that notes cannot be repeated until all 12 tones are used. They can and usually are, but in the beginning I suggest you do so minimally.

In Pic 6, here is a little piece I did for fun. The flute is playing the basic (Prime) tone row, while the clarinet is based on the Retrograde. The bassoon starts with the Inversion and then utilizes the Retrograde Inversion, while the harp is just playing notes from all of them with the idea of avoiding tonal implications. 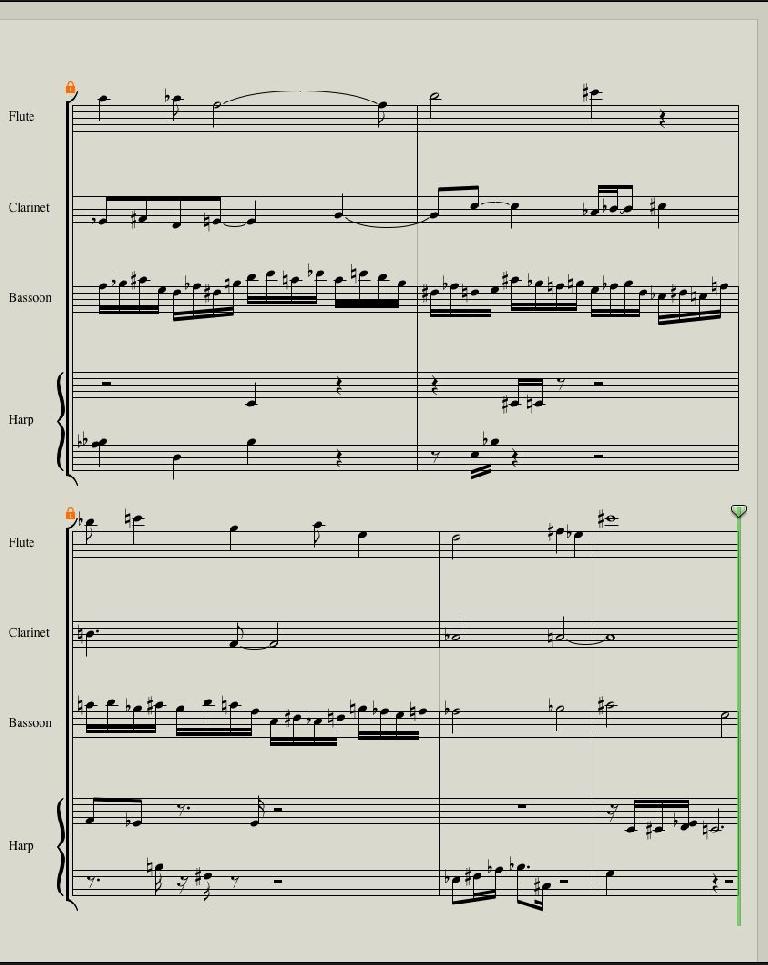 As you can hear in audio example 1, this experiment that I did in fifteen minutes did not result in great music:

However, if you do a fair amount of this you will find that music that previously would have sounded strange to your ears no longer sounds quite as strange, much as like listening to a foreign language over time. You may even find yourself starting to sprinkle aspects of these principles into your own compositions, even if not composing strictly 12-tone music per se. And when you are feeling creatively blocked, it can be very freeing because it simply gets you writing again.

Click here to take your Music Theory knowledge to the next level.