Language
Ornaments and embellishment techniques are part of the language of every skilled musician or composer. Lynda Arnold explores both in Baroque and Classical in this fascinating music theory article.
Let's get into the holiday spirit and talk about Ornaments! Not the ones that hang on the tree, mind you, but the embellishments found in countless scores from the Baroque period through today. As we investigate some of the most common ornaments found in music, you will certainly recognize and hear them time and time again in all styles. Ornaments can be found in composer's scores for any instrument or as part of the improvising musician's toolbox. From singers to instrumentalists to composers, the use of ornaments or embellishments in melodies and solos is an integral part of the music making process.

During the early Baroque period, musicians often improvised their playing in the style of the day. It was still important at that time to know how to play by ear. Musicians would play a composers piece as written the first time around and then add ornaments the second time. Later, composers or transcribers would add in suggested ornamentation based on the musician's interpretation. As music evolved into the late Baroque and Classical periods, composers became more insistent that players follow the ornaments in the score. By the Romantic period, it was considered sacrilege to deviate from the composers score. The 1800's saw the rise of big orchestras and more complex music both harmonically and melodically. There were plenty of embellishments written in for musicians to tackle.
It's interesting then at the turn of the 20th century that the rise of popular music styles including blues and jazz would give way to a more improvisational music culture again that welcomed personalized interpretations of spontaneous or written melodies. Thankfully, the innovations that we've seen in the last 100 years have inspired composers and musicians both acoustically and electronically to play with what's possible.
Let's discuss the most common ornaments developed during the Baroque and Classical periods and then see how these embellishments are evolving today. 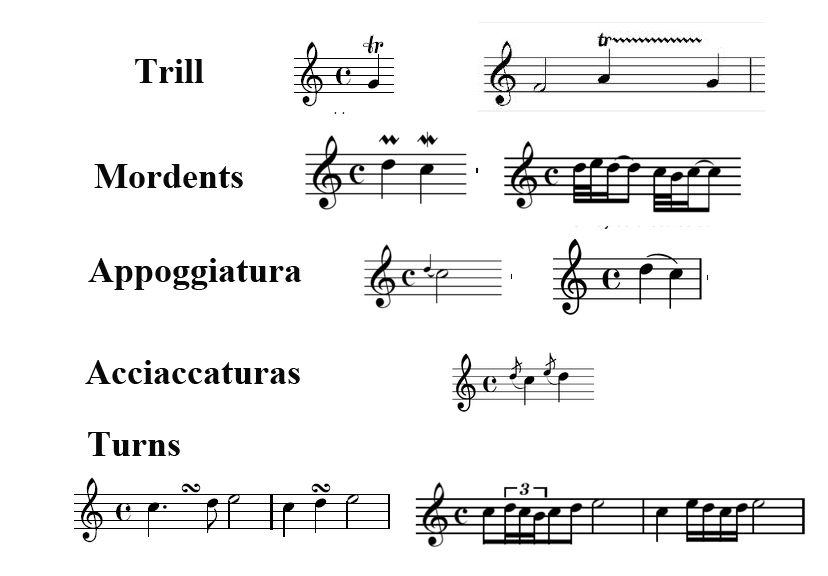 Grace notes include a variety of ornaments but essentially are smaller printed notes attached to a main note with a slur. The two main types of grace notes are the Acciaccatura and the Appoggiatura. Acciaccaturas are notes played quickly right before the beat and emphasizing the main beat note. You'll know if it's an Acciaccatura because the small note has a line through it. These are the most common kinds of grace notes used in both Classical and Contemporary music. Appoggiaturas, on the other hand, are played by 'borrowing' time from the main beat and the two notes are played evenly. So, if the main beat were a half note, you would play the two notes as a pair of quarters on the beat. These are very prevalent in the Classical Music era.

A Turn is a type of grace note denoted by an infinity looking symbol. These are really fun to play as a flute player.  A Turn is played by starting on the main note, playing one up, then back to the main note, then down one and then finishing on the main note. The neighboring notes are diatonic unless the composer puts a sharp or flat above or below the symbol. Turns are an effective embellishment due to their quick movement and half to fit inside the beat of the main note.

A Trill is a rapid alternation between two notes for an extended period of time. Trills usually start on the beat from the note above the main note and are indicated by a 'Tr' symbol with a zigzag line after it if it's for a longer duration. Most trills last for the duration of the main note. I remember practicing particular Bach Inventions on piano and finding it challenging to keep one hand even with the trill while the other hand played the melody or harmony part.

Mordents were very popular during the Baroque era and were often improvised like Trills and Turns. Mordents are short and consist of a fast alternation between two notes, like a mini Trill. If the zigzag symbol does not have a line through it, the player goes up one note and quickly back down to the main note. With the line through the symbol, the mordent is played down and then back to the main note.

Many of the classical ornaments are used in today's music and were adopted by popular styles during the 20th century. The early blues piano players used grace notes, glissandos (sliding between one or many notes) and other embellishments heavily to give their melodies and solos more character. As these musicians journeyed back into improvisation and away from the confines of printed music, innovation and personal style became more apparent. Jazz and rock styles certainly picked up on this. When you listen to singers from opera to pop music, you will hear a myriad of turns, glissandos, extended vocal runs and even trills as they incorporate vocal acrobatics to convey emotion. Tune into The Voice or American Idol to hear these vocal acrobatics at play. Sometimes, these skills can make or break you as a singer or musician.
In today's popular music, from rock to jazz, musicians are continuing to add ornaments and embellishments to written melodies and improvised solos. In the process, new techniques are forming by players who are pushing the boundaries of their instruments. These new ways of playing are often call 'Extended Techniques.'  One of my flute inspirations, Ian Anderson, published a book of his flute solos and included an explanation page of his custom symbols found throughout the score.  In the picture below you can see some of his custom techniques and symbols, like playing the first or second harmonic, singing into the flute and flutter tongue. His use of these extended techniques made him a unique and dynamic performer influencing countless players. 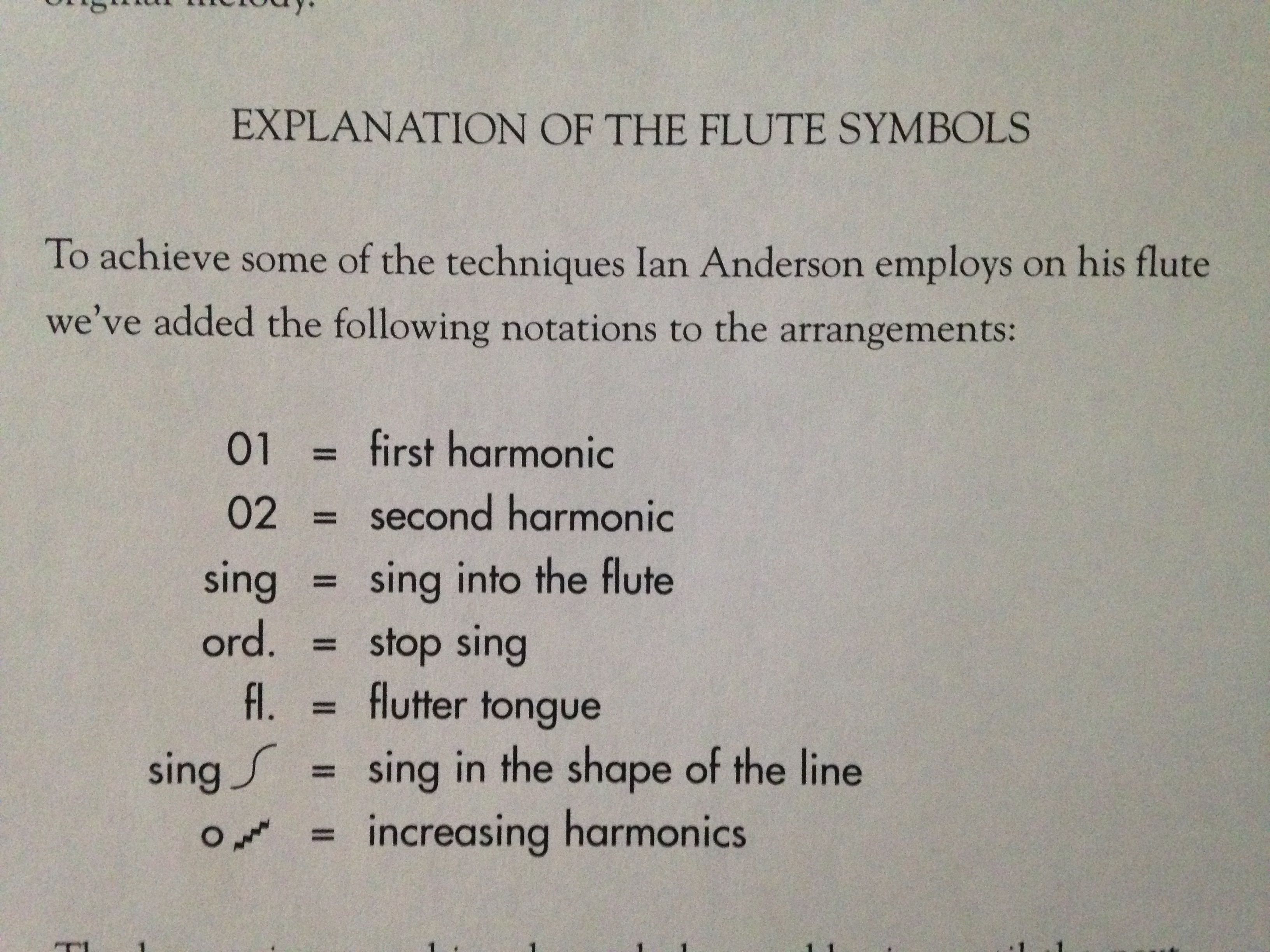 Ornaments, Embellishments and Extended Techniques are part of the language of every skilled musician or composer. So, if you are new to this area of music theory or need to brush up on these techniques, hope you have found this an interesting introduction. And, for those of you who know the basics, an investigation into the extended techniques of the instruments you work with should give you even more inspiration.
Learn more about Music Theory, Composition, Ear Training and Orchestration at AskVideo:
https://www.askvideo.com/courses/topic/musictheory

Charlie
Probably the most used and abused embellishment in guitar playing is the "hammer-on." Odd name, but everyone would know it when they heard it.