Language
Experienced musician, composer and Logic expert, Jay Asher, shares these excellent tips on how to use chord inversions to make your keyboard parts even more musical.

If one has not studied music theory or sometimes even if one has but only Classical music, there can be a lot of jumping around when moving from chord to chord in the left hand that may not yield the most musical result. Sure, sometimes we want that, but what if we do not? In Pic 1, here is the chord progression I will be working with to illustrate this approach.

What is an inversion?

To invert is simply to change the order. In Pic 2, you can see the C Major 7th chord that begins the progression in root position and three possible inversions.

Our goal is to use inversions to move as smoothly as possible from chord to chord. To do so, we need to analyze which notes are in common between them. Let's do so with Pic 3.

1 '" Analyze the chords for common notes

The C Major 7th chord is spelled from bottom to top as C, E, G, B. The second chord, the Em7 (b5), is spelled E, G, Bb, D. There are two notes that are in both chords, the E and the G, and obviously the B and Bb are close together. The third chord, the A7 (b9) is not even fully played as it really requires two hands. The notes are A, C#, E, G, and Bb. This means that there are three notes in common from the previous chord: E, G, and Bb.

This requires thinking about not only where you are but where you want to go and sometimes some trial and error. Also, bear in mind that there is not only one possible solution but several that you may like.

I am thinking that on that last chord, I really want to hear the b9 (Bb). If I invert the notes with 3rd inversion, as you see in Pic 4, I can accomplish that. The only missing note is the root, the A, which either a bass player will play or the human ear somehow kind of fills in. 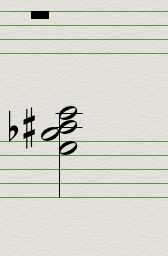 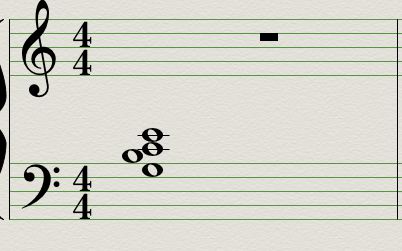 3 '" Filling in the other chords

Now that you understand the thought process, check out my end result in Pic 6.

In moving from the C Major 7th chord to the Em7(b5), I was able to keep two notes in common with only slight movement required for the other two notes.

In moving from Em7(b5) to the A7(b9) I was able to keep three notes in common with only slight movement required for the other note.

In moving from the A7(b9) to the D minor 7th, I was unable to keep any notes in common, but with only slight movement required for all the notes.

In moving from the D minor 7th to the G9 , again I was able to keep three notes in common with only slight movement required for the other note.

In moving from G9 to the C 6th, again I was only able to keep one note in common, but with only slight movement required for the other three notes.

Finally, in moving from the C 6th chord to the A7(b9), again I was able to keep two notes in common with only slight movement required for the other two notes.

I now play in a bass part that outlines the chord progressions roots and I have reached a very musical solution.

In Pic 8, here is another set of inversions that works well.

Try this approach in you own with other chord progressions and see where it takes you. Have fun!