The Circle of Fifths 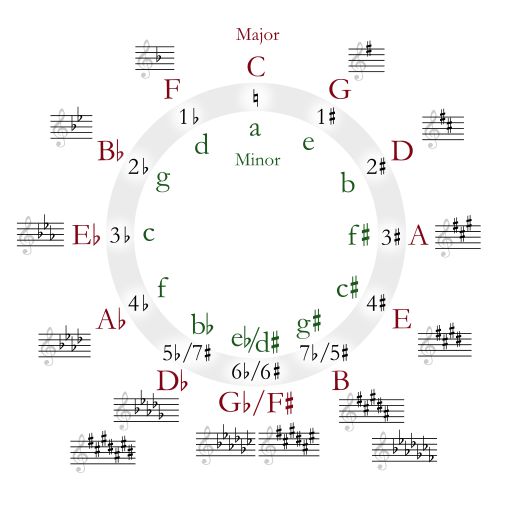 The circle of fifths (credit: Just plain Bill via Wikipedia.)

The Circle of Fifths is divided up into 12 sections, which each represent a different key signature. As you travel clockwise around the circle, each key signature is the fifth pitch in the scale of the preceding section. For example, if you begin with C, the following section to the right is G, which is the fifth note of the C scale. You can use The Circle of Fifths to determine the key signature of each key. To figure out how many sharps are in a key, simply count clockwise from the top of the circle. For example, the C Major scale has no accidentals (flats or sharps) The G major scale, which is one section clockwise from C, has one sharp, F#.

To calculate the number of flats in a key, you follow a similar process, except count counterclockwise. For example, the key signature of Bb has two flats (Bb and Eb). We know this is true, because Bb is located two sections counterclockwise away from C.

If you're writing a song in the key of C Major, then the scale you're working with to build your chords is the 'C Major' scale. The most basic diatonic chords are three-note chords (triads), which are composed from alternating notes from this scale.

The first, third and fifth note of the major scale form a major triad. In the key of C: 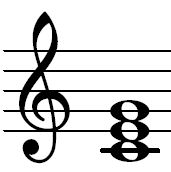 The next diatonic triad from the C Major Scale is formed by beginning on D:

When played together, D, F, and A form a 'D Minor Triad'.

Roman numerals are used in music to describe how a chord relates to the key signature.

The roman numerals used to represent these triads and the corresponding type of triads are:

In the Key of C Major, the vii°  diminished chord would be:

Using any four notes in the chain of thirds creates a '7th chord' (a triad within a seventh). A seventh chord is a chord consisting of a triad plus a note forming an interval of a seventh above the chord's root.

When not otherwise specified, a seventh chord usually refers to a dominant seventh chord, which is a major triad with the addition of a minor seventh.

If you begin with a diatonic triad, and build onto this using another third on top, the next note in the chain of thirds gives each of triads a '7th'. The I and IV chords will have major 7ths, all the others have minor 7ths.

Here is a useful list of all the 7th chords:

In the key of C Major, these chords would be:

You can advance your chord progressions by adding sevenths to your chords. These additional notes will help to advance your chord structures into new musical territory. It's a good idea to practice both diatonic triads and seventh chords on a piano, as the keyboard makes it an ideal instrument for learning theory and chords.

Putting Your Chords into Practice