When I work with students on composition, especially in the area of harmonic development, they can wrap their heads around the triad, build triads from a major scale and even try basic chord progressions. But, when the concept of suspended chords, 7ths, 9ths, 11ths and 13ths come into the picture, they are not so sure how to use these colorful notes to expand their progression. There are some simple ways I show students to expand their triads harmonically using root position chords as well as chord inversions. In this article, I will show how to use some of these notes and start to experiment with using them in a common chord progression. I will assume that you know some basic music theory like scales and triad theory.

For the purpose of this article, I'll show my examples using the simple and interchangeable, 1-4-6-5 progression in the Key C Major. These four chords have been used time and again in major hit songs as the basic verse or chorus progression. The I-IV-V is the basic progression that dates back to the dawn of blues music. It is the basis for all the popular genres of music we listen to today.

In the Key of C the chords are C Major (1), F Major (4), A minor (6) and G Major (5). Here is the basic progression with all of the triads in root position and right after it, the progression with some of the chords in inversions to provide better voice leading and flow between chords:

I will also stay in the key of C Major to keep things simple and not add sharps or flats to notes to change the tonality of the progression (although that is fun too!).

You may have seen Sus 2 or Sus 4 in pop lead sheets and wondered what to play. 'Sus' stands for Suspended. Sus 2 and Sus 4 are two types of common suspended chords. The function of the chord is in the name. They create a simultaneous open and tension sound within the chord by changing the 3rd of the triad that defines the chord as major or minor, to the 2nd or 4th. The most common example is the Sus 4. Instead of playing the 3rd of the chord, you play the 4th note above the root. The 4th note of the chord wants to resolve to the 3rd, to release the tension. Here is the progression with Suspended chords that resolve:

Of course, it's a bit much to do this on every chord, but you get the idea. This is a great technique to use for building harmonic tension.

Get your 7th Chords On!

Seventh chords are the most commonly used chords after triads. The V7 chord, or dominant chord, is the most common of them all and is used more often than just the V chord by itself. This is due to the tension the 7th creates as it resolves back to the I chord, our harmonic home base. You see in the example below that the V7 chord (G7) has two tones that are a half step away from notes in the I chord. Because of these half steps, the V7 naturally wants move toward the I Chord. Being aware of these half steps between chords can change the way you approach chord progressions in general, creating more interesting harmonic shifts.

Here is our basic progression expanded with 7th chords: C Major 7, F Major 7, A minor 7 and G7. At the end I play a C triad with the octave C on top so you can see the G7 to C resolution. Don't worry too much about the different types of 7th chords, just know that we are just using the notes of the C major scale to build these more complex harmonies.

The use of 9ths, 11th, and 13ths are more common in jazz but can be really effective in various pop styles too, especially ballads, soul and RnB. This is another way to think of these notes in relation to the chord you are playing: 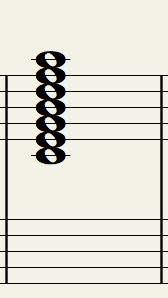 Of course, you do not have to play all these notes to make a C Major 13 chord. The 5th, 11th or even the 9th can be omitted for example. Also, If you drop down the high notes closer to the root, say the 9th or the 11th, you have what resembles a sus 2 or sus 4 chord. Interesting! Many times in music theory, you'll find similar melodic or harmonic concepts with different names depending on the intention of the chord. These upper notes can create lovely tension for resolving to the following chord. Here's the progression with some of these more complex harmonies:

Now, that you have some more tools in your toolbox, try mixing up these harmonic ideas in different chords. I may use a suspended chord following by a couple 7th chords, then one with an added 9th and end on a root chord. It's really up to you how much or little you want to throw in there. Of course, it comes down to your ears and what sounds great to you. Maybe adding a suspension to the VI chord is all you need to spice things up. Or maybe having a couple 7th chords does the trick. The emotion and purpose behind the composition will guide the way. Try it and you'll see.

Check out these video courses on Music Theory at AskVideo.com.