Language
Welcome to part 2 in this series on music production techniques. Think of these as essential audio concepts every self-respecting producer should know! Let's continue with Modulation effects.

Read Part 1 of this series on Delay & Echo here.

Here we'll take a look at what modulation is, the different types of modulation based effects you can expect to come across, and what they can be used for in typical mixing scenarios.

So what is modulation and what place has it got in effects processing? Essentially if we modulate something we simply change it, so something as straight forward as moving a fader in our mix is actually modulation, obviously a very simple form of it, but modulation none the less.

Of course, we are looking at slightly complex forms of modulation here but the theory is exactly the same. Modulation effects are capable of changing something in a real time, automated fashion. This parameter may be pitch, volume, pan or anything else you can think of. 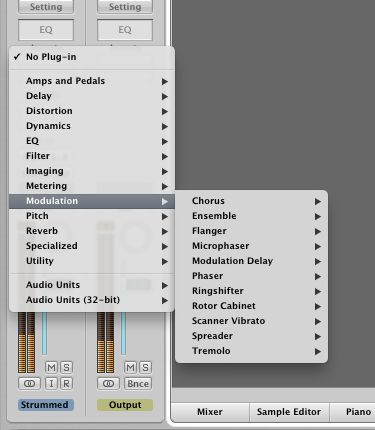 A list of modulation based effects in Logic Pro 9.

If a plug-in alters a specific parameter (or multiple parameters) over time you can pretty much assume it's a modulation effect. Much of what a modulation based effect can do can be seen in action in synthesizers when using LFOs and envelopes.

Although a modulation effect could be effecting literally anything there are some more traditional effects you are bound to see in your DAWs plug-in list. Let's take a look at the more common modulation processors and then we'll move on to the slightly more complex. 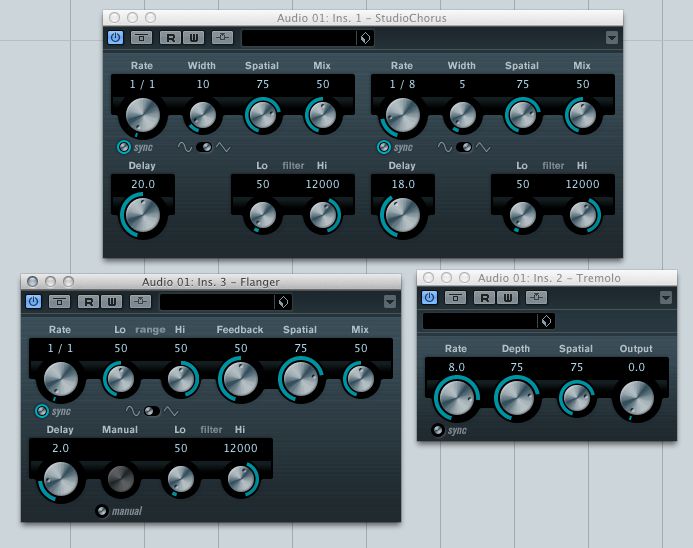 A selection of modulation effects in Cubase.

Chorus is arguably the most popular and widely used modulation effect there is. This is probably due to the fact it's extremely simple to use and very popular with guitarists as well as producers. A chorus pedal is often a staple part of even the most basic guitar effects set up.

Chorus units can differ slightly in their operation between different manufacturers but the end result is often similar. A traditional chorus pedal will duplicate the incoming signal and detune or delay the copy slightly.

The resulting effect is a richer, wider sound that often sounds a lot thicker than the single source it originated from. To make things even more dynamic most chorus effects employ an LFO modulate the delay between the signals, the depth and the speed of this modulation can often be changed to make the effect more or less intense.

The riff is made wider and lusher using a basic chorus setting:

You should find a chorus effect as standard with just about any DAW but obviously there is a huge amount of choice when it comes to third party plug-ins as well.

It could be argued that Phasers and Flangers are nothing more than jumped up chorus units and this isn't far from the truth but it's important to know their differences and why the sound they produce is anything but a classic chorus.

Again, many plug-in developers have their own slant on what a flanger or phaser really is but essentially you can expect to see a few more parameters on a typical flanger and phaser when compared to a chorus.

The same synth treated with a classic phaser patch:

The first difference you are likely to see is a feedback control. This simply enables you to feed the output of the duplicated signal back into the signal chain of the whole effect. This produces the resonant, psychedelic effect we all associate with these effects.

Generally speaking Flangers and Phasers are very closely related but in most cases a Flanger will be the more subtle version of the two effects. Flangers are great for inducing a spacey, bubbling width to sounds while phasers give that classic 'jet stream' intensity we love.

The same guitar with some relatively heavy flanger applied:

The Dimension-D And Other Useful Tools

The only real problem with all these lush chorus based modulation effects is that they tend to have an un-canny knack of reducing the impact of a sound. Think of it as a sort of pay off between shimmering depth and direct dynamic impact!

Saying this there are some processors that promise not to impact on the 'punch' of your audio too much. One the processors famous for this is Roland's Dimension-D hardware. A few software developers have luckily now brought this much revered unit into the digital realm. 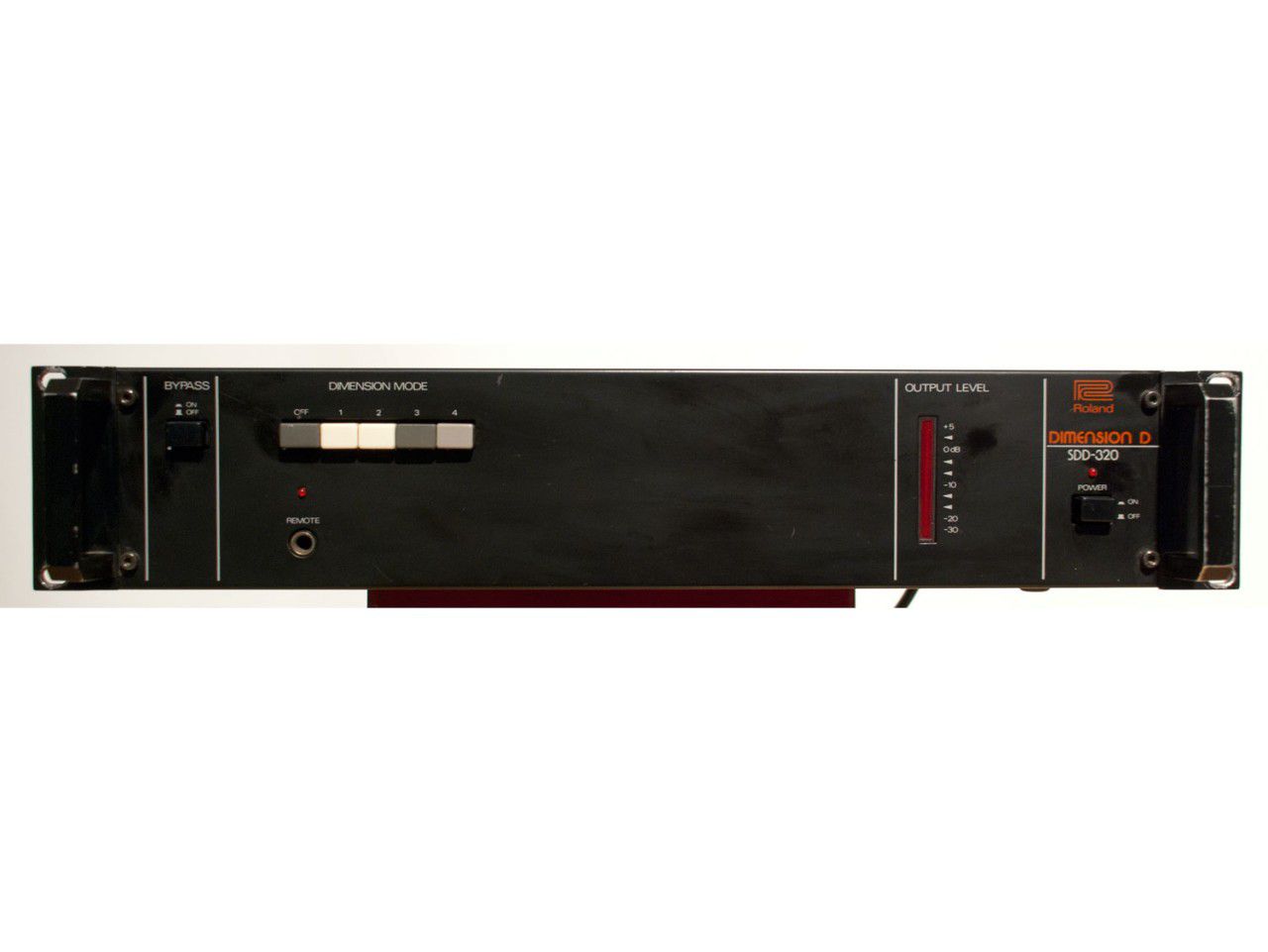 Check out Empty Room system's native version and Universal Audio's DSP based plug-in that runs on the UAD platform. Both do an excellent job of reproducing the effect. If you cant get hold of these then some Ensemble / Chorus units do promise a reproduction of the effect, such as Logic Pro's own Ensemble effect.

As I said at the start not every single modulation based effect is a chorus, flanger or phaser. Any plug-in that continuously changes an internal parameter can be proud to call itself a modulation effect.

For instance a tremolo plug-in that changes the volume of a sound in realtime is realistically a modulation based effect, as is an auto-panner, rotating leslie speaker or vibrato. 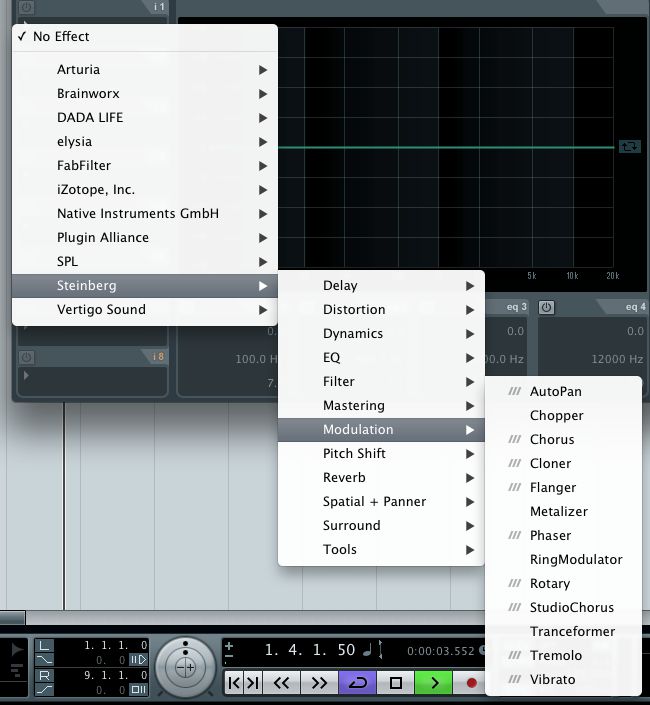 Cubase's modulation plug-in list shows the diversity in this category.

Ring modulator are another great modulation effect and can create much more complex, diverse sounds than anything we have looked at so far. Some ring modulators come in very simple forms but others provide multiple LFOs and envelopes for modulating internal parameters. Try Logic's 'Ringshifter' for the king of all ring modulation effects! The Ringshifter in Logic Pro can take your modulation effects to the next level.

And now treated with an automated instance of Ringshifter:

Thanks for reading. This time next week we'll publish part 3 of this music effects series. Stay tuned!

In the meantime, learn more about audio at AskVideo.com