Language
Welcome to part 1 in this series on music production techniques. You could think of these as essential audio concepts every self-respecting producer should know! Let's start with Delay & Echo.

When it comes to creating space and dimension in your mix delay lines are invaluable tools. The only problem is choosing the right one for the job, as the current selection of competent delay plug-ins is pretty staggering.

Here I'll run through the essential facts you need to know before jumping into the world of digital delay and to help you pick out the right processor I'll look at the different flavors of delay processor you can expect to come across.

Most of us are aware of what delay and delay lines are, they are available as stock plug-ins in just about every DAW out there. It's highly likely however that some of the beginners out there are using the effect without really understanding what's going on 'under the hood'.

Essentially a digital delay line works in much the same way as a sampler. Sections of audio are sampled and then played back at user defined intervals. The playback is often repetitive and the amount and decay of these repetitions can also be altered by the user. This parameter is commonly referred to as feedback, regeneration or decay.

The timing of the repartitions can often be synced with the DAWs BPM, giving the opportunity to create tight, rhythmic delay effects. The measures can also often be altered to introduce individual groove to your delay patterns.

Most DAW manufacturers offer stereo and mono delay effects, with the stereo version usually offering two independent delay lines, one for the left and one for the right. This enables us to create stereo width and dimension. 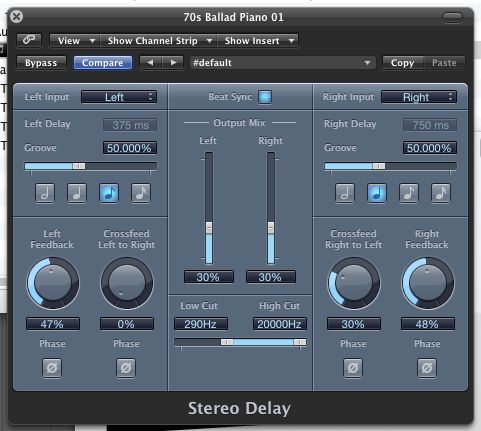 A basic Stereo Delay patch applied to a piano loop in Logic:

Although delay plug-ins will more often than not have a wet / dry mix they can be used as inserts and send / return based effects. You may find that using the latter may be more beneficial as any repetitions will still be audible even when the level of any effected parts is changed.

Now we have the very basics under our belt let's take a look at the different flavors of delay you might expect to see when using modern plug-ins in the mix.

So first up, you may have seen delay and echo plug-ins and you may be wondering what the difference between the two is. If the truth be told these two effects are ultimately the same, it's really their origins that differ somewhat.

Delay tends to be purely digital in nature and often refers to digital delay lines. Echo on the other hand is a term that's been used when referring to analog tape based delays. These effects utilize tape loops to create their sound and the hardware units used in this area are often called Echo Boxes or Echo Machines.

Reason's 'The Echo' effect is a perfect example of a physically modeled echo machine.

The Echo being applied to an acoustic drum loop:

Rather than using digital sampling to create individual echoes these units used a physical, repeating tape loop. The saturation combined with the wow and flutter created by the tape resulted in a very unique sound. 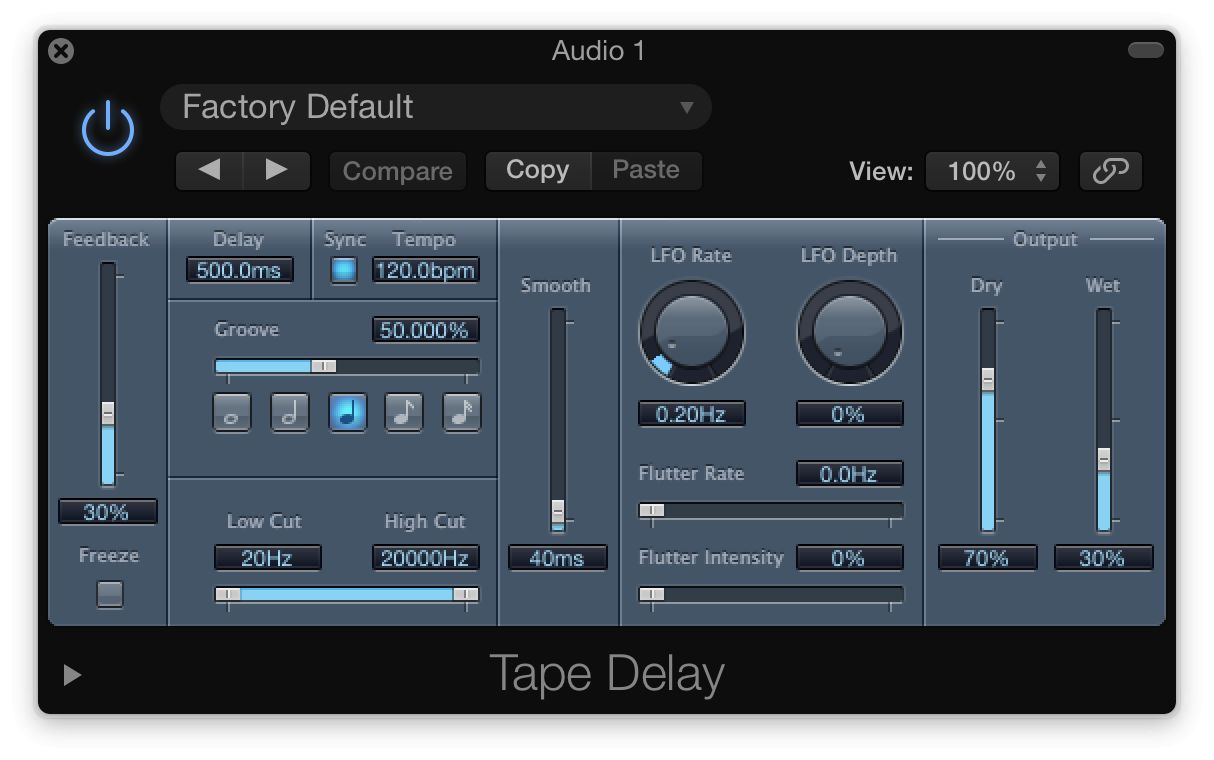 Of course if you see a tape echo in the digital realm today it is either a delay-line based on tape echoes or a physical model of one of these revered hardware units. Either way you can be pretty sure that apart from a few extra touches you are dealing with another form of delay here.

From The Simple To The Sublime

Delay plug-ins come in all sorts of shapes and sizes from simple to the extremely complex. Don't ignore the simple delay plugs just because they don't have a huge amount of controls and flashing lights, often these more basic units can be the perfect tool.

Logic Pro and Cubase both contain pretty straight forward stock stereo delay plug-ins and these are great examples of pretty easy to use processors that will get the job done with minimal fuss. Although they do contain some basic extra features, such as high pass filters, they are extremely accessible for beginner and advanced users alike.

Even simple delays are very flexible and can produce everything from spring like ambiences using super short delay times to more hypnotic effects at higher settings. 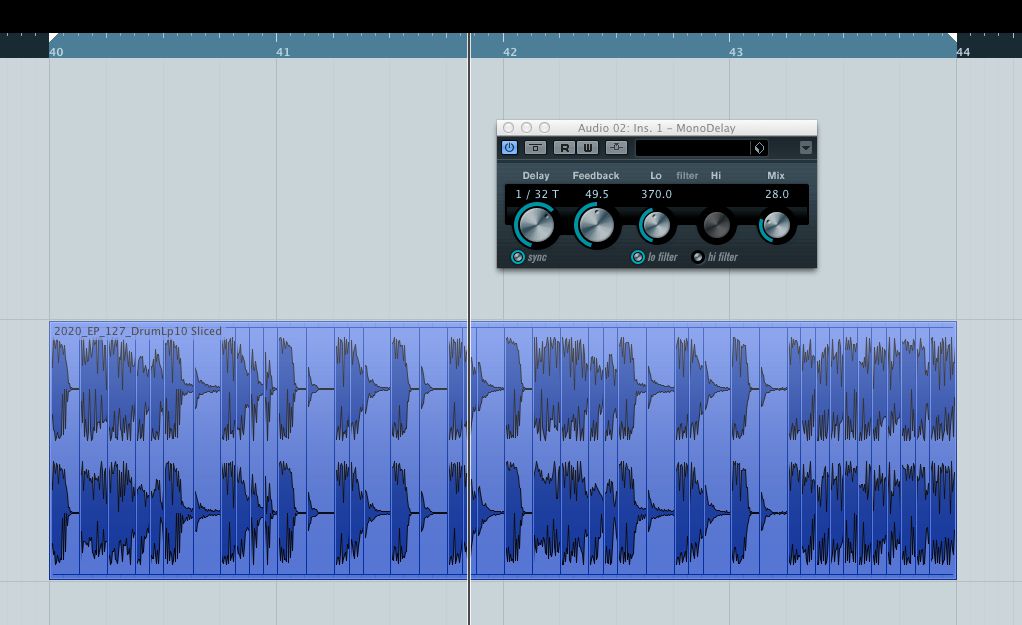 Super short delays can result in effects that resemble spring reverb or ambience:

If you are a little more experienced or just want to push the envelope slightly you can always move onto something a touch more complex. The sky really is the limit here but I would strongly advise taking a look at Fabfilter's Timeless 2 or Ohmforce's Ohmboyz plug-ins. 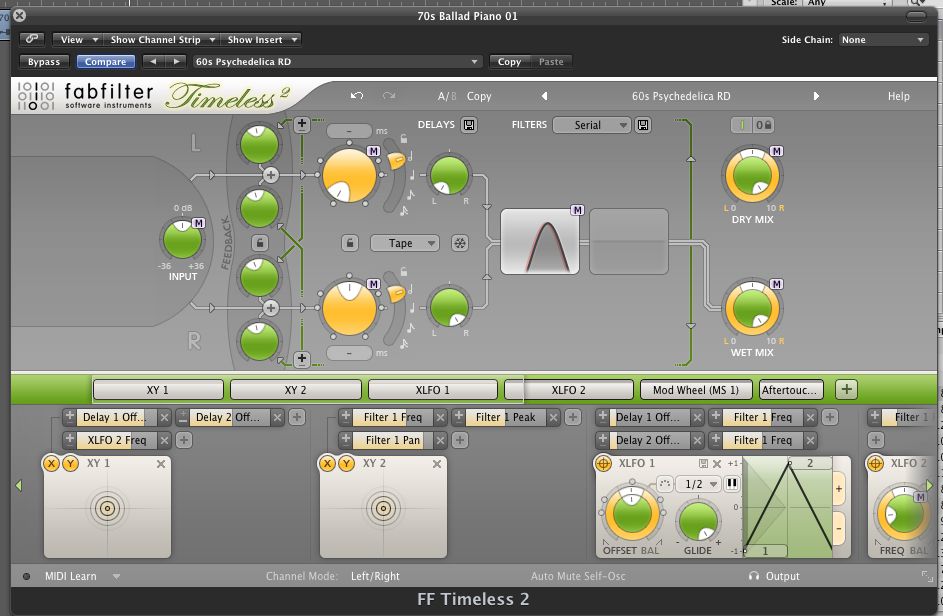 Fabfilter's Timeless 2 is excellent for the more adventurous among you.

A piano being treated with a typical Timeless 2 patch:

Both of these plug-ins do contain multiple delay lines at their core but are also capable of some pretty complex routing and additional effects. Filtering, distortion, auto-pan and modulation are all crammed into these units making them the perfect tool for the advanced delay artist. 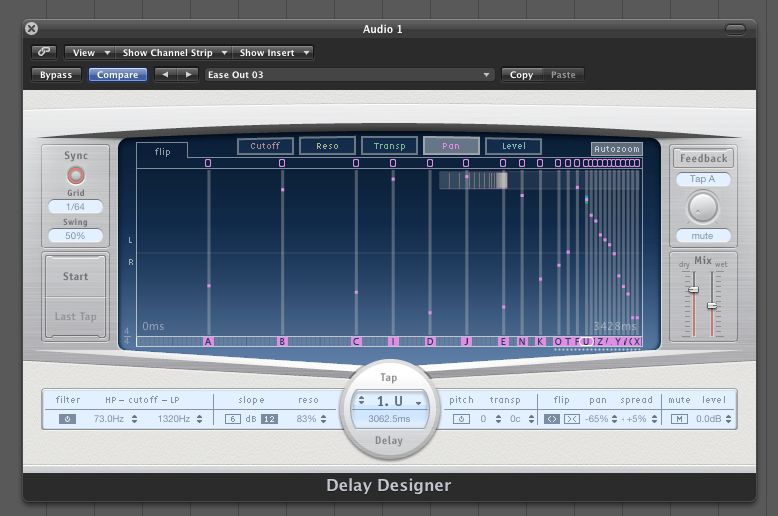 Logic Pro sports a high complex delay generator in the form of it's Delay Designer.

A vocal being treated by a more complex Delay Designer patch:

When you do step up to these meatier delay units you will be able to start playing with classic effects that are only really possible with the more feature rich plug-ins. Some of these classic effects are associated with dub music or ambient electronica.

Some plug-ins allow us to 'freeze' the signal that is being delayed, resulting in a trippy and hypnotic repetition. OhmBoyz for example has a dedicated 'Sustained loop' function that allows us to capture slices of the delayed signal and repeat them with varying intensity for a really cool effect. 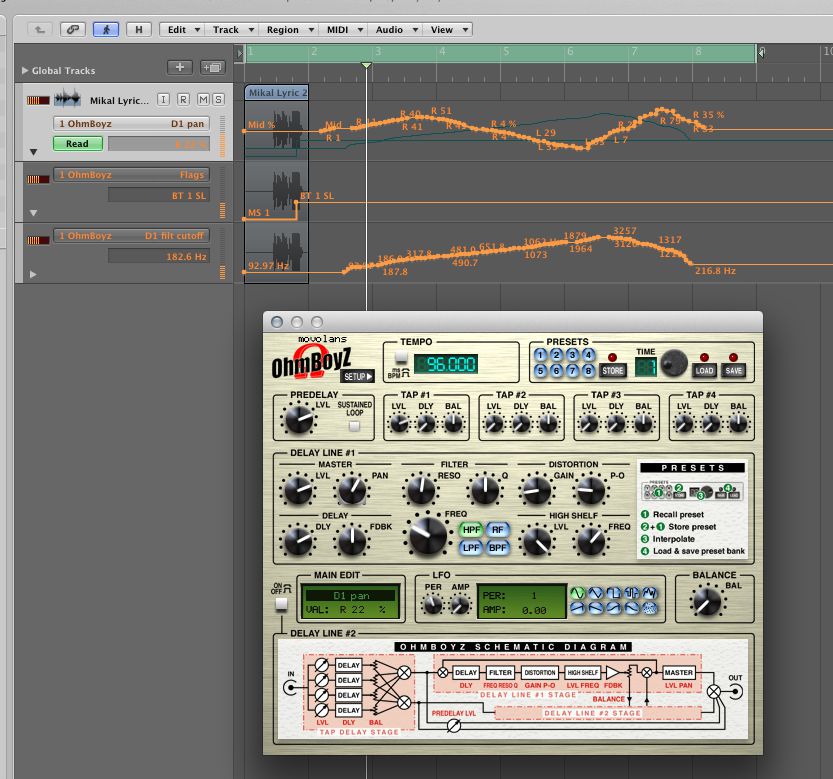 OhmBoyz has some great features for creating twisted frozen delays.

Once captured these portions of the delayed signal can be manipulated further using either internal modulators or automation. Modulating a delay units parameters in this way will result in a much more dynamic and evolving effect and brings us a good distance from the simple mono delay lines mentioned at the start of this chapter.

Delay As A Problem Solver Or Utility

Of course not all delayed audio results in chaotic stereo effects, in some situations we can use delay as a problem solving tool or audio utility. You may notice that your DAW's channel strips feature a delay control or a 'sample delay' plug-in.

These tools are not delay effects in the traditional sense, they have no feedback controls and they offer no repetitions, they simply delay an audio stream allowing the user to alter the timing and position of specific instruments or one side of the stereo field.

This can be extremely useful when compensating for delay in live situations, latency in DAWs and also delaying a single side of the stereo field to correct phase issues or to simply widen the stereo image. 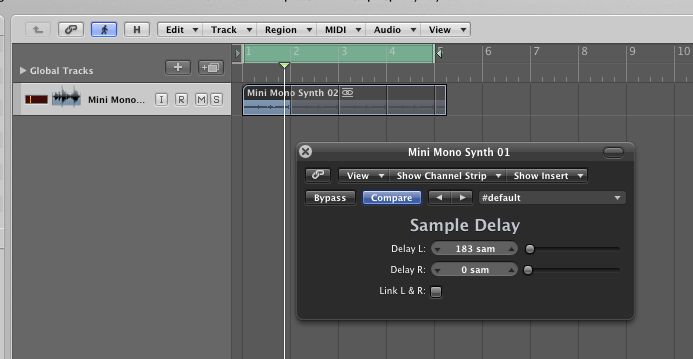 A mono synth becomes stereo with help from sample based delay:

As you can see delay is a pretty versatile effect with a few different faces. Get creative with them and your hard work will pay off, giving you some of the most useful and impressive effects available in your DAW.

murgatroyd
Well, I thunk I know a little bit of the math to get everyone on the right track.