Effects most commonly associated with the 60s and 70s, flanging and phasing are still very much in use in modern production. Joe Albano explains exactly how they work .

Flanging and Phasing are two classic modulation effects that people often confuse with one another. But while they do have a similar sound—a periodically shifting tonal variation—each has its own specific flavor, and the way each is achieved, technically, is different. This article will explain. 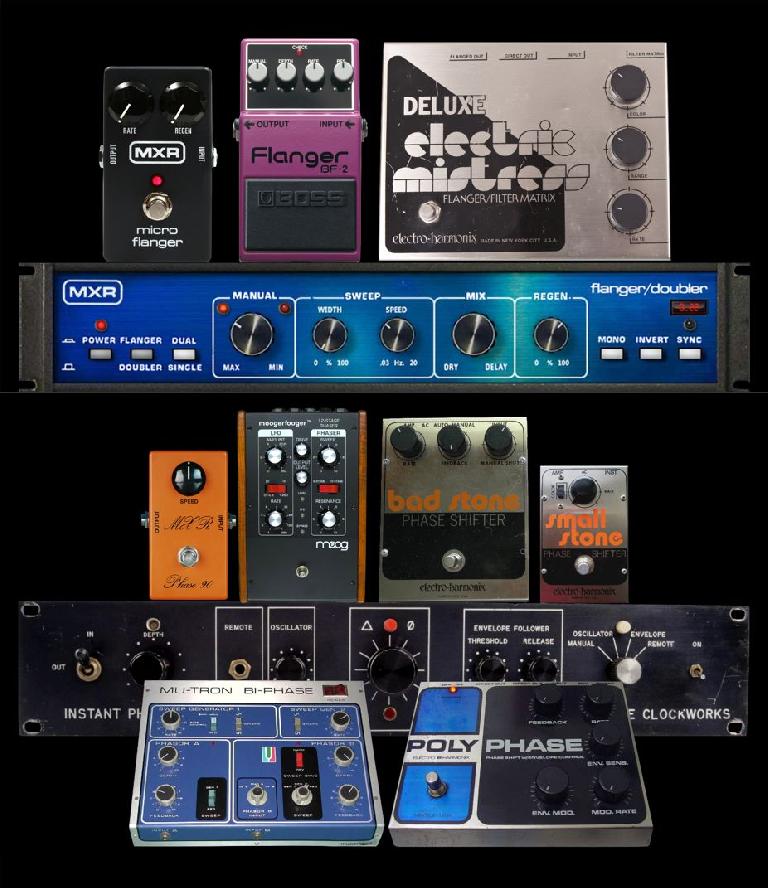 Some classic Flangers and Phasers

Both Flanging and Phasing are created by duplicating a signal, adding a short delay to the copy, modulating the copy, and mixing it back in with the original. To understand how this works (in both cases), some knowledge about the effects of combining a signal with a delayed copy is necessary, so first I’ll provide a little background.

When a copy of a signal is delayed and mixed with the original, the resulting effect depends on the delay time—this is usually measured in milliseconds (ms). The most familiar —and obvious—effect is echo, where the delayed copy follows the original after a noticeable delay—typically around 100 ms or more. But when the delay times are shorter the effect is not so obvious. At delay times of less than 30-50 ms (depending on instrument type and attack) our hearing doesn’t perceive the delayed sounds as a separate signal, it fuses the original and delayed signals. But we do perceive the contribution of the delayed copy as a variation in tone.

When two identical signals combine, the peaks and dips of the waveforms are either reinforced or cancelled, depending on where in the wave they overlap. For example, if two positive or negative peaks coincide, the level is boosted; but if a positive and negative peak coincide, the signal is cancelled, either partly or completely.

Depending on the delay, this can result in a series of peaks and, especially, dips—notches—in the frequency response of the combined signal, which naturally alters the tone of that signal. This is called Comb Filtering (named for the appearance of the notches on a frequency-response graph, which look like the teeth in a comb).

A typical Comb-Filter response (in this case for a Flanger)

Comb Filtering by itself produces a static tonal variation, but if the teeth—the notches—are periodically shifted in frequency (above and below the initial frequencies of the static setting, which are based on the delay), then a periodic tonal variation is created—this is the classic Flanging (or Phasing) effect. Depending on the circuit and the settings of the controls provided, the result can range from a shifting hard-edged metallic tone (Flanging) to a gentler soft, whooshing tonal sweep (Phasing).

So while Comb Filtering is responsible for both Flanging and Phasing, the specific effect is different for each, due to the difference in how the delayed signal is created. I’ll start with Flanging.

A Flanging effect is created by delaying the copy of the signal uniformly at all frequencies. The original signal is duplicated, and a very short delay is applied—typically between ≤1 ms to around 5 or 10 ms. Since the same delay is applied to the entire frequency range, when the delayed copy is mixed with the original (usually at around a 50% balance for the strongest effect), the notches that occur are at harmonically-related intervals, resulting in a strong, often somewhat nasal, tonal balance. This is sometimes referred to as a “static flange”.

But the key to classic Flanging is having an LFO—Low Frequency Oscillator—patched to control the delay circuit, set to periodically modulate the delay time. This will gradually increase and decrease the delay time above and below the initial delay-time setting (either fixed or set by the user on the front panel). As the delay time is swept back & forth, the notches are periodically moved, and the Comb-Filtered tone naturally shifts with the changing notched frequencies, creating the typical Flanging effect.

Before the days of dedicated delay effects, Flanging was originally done by syncing two tape machines together, with the same audio playing on both, and then gently touching the metal flange of the reel on one machine, slowing it down slightly, causing the comb-filtering against the signal from the other tape machine—that’s where the term “flanging” comes from. Later, analog and digital hardware delay devices were used to generate the effect, and now, of course, it’s available in many plug-ins.

But to get the really classic Flanging effect—that sharp metallic edge—there’s one more control that comes into play—Feedback. The delayed signal is fed back into the delay path, greatly intensifying the effect. A generous amount of Feedback can really make the flanging cut through a mix, or take the effect all the way into special fx territory, if desired. 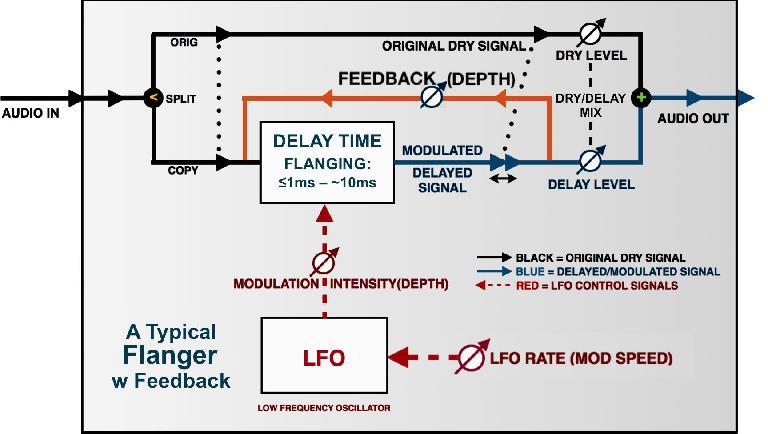 Diagram: A Flanger with Feedback

Now, Phasing also utilizes very short delay applied to a copy of the signal, mixed in with the original, and periodically swept. But the difference is that in Phasing, the delay is not applied uniformly at all frequencies, like with Flanging—instead, due to the way a phaser is designed, the delay is different at different frequencies, and so the resulting comb-filter notches are not harmonically-related. The resulting tonal quality is somewhat softer, for the characteristic gentler whoosh of phasing, as opposed to the sharper metallic edge of flanging.

A quick reminder—phase is the relative position in the cycle of a wave in relation to another. So if a wave at a given frequency and its copy are in exact sync, there would be no phase difference, and when combined they’d reinforce, boosting the level, If the second wave starts when the first wave is a quarter of the way through, it would be 90° out of phase with the first wave (partial reinforcement/cancellation); and if the second wave started halfway through the first wave it would be 180° out of phase, for complete cancellation.

But for complex sounds, with harmonics and overtones at multiple frequencies, the amount of phase shift would necessarily be different at the different frequencies, and this is where Phasing differs from Flanging, where the delay is the same at all frequencies.

To create the delay in Phasing, the copy is passed through a circuit called an All-Pass Filter. Now, all filters (all analog filters and even most digital ones) produce some phase shift around the cutoff frequencies as they do their job. An all-pass filter creates phase shift without actually altering the level of any specific frequency range (hence “all-pass”). Instead, frequency-dependent phase shift is created around the set frequency—if two of these are connected in series, the result is a single notch.

In the lingo of phase shifters a single all-pass filter would be a “Stage”. But even a simple two-stage phaser would have a barely noticeable tonal variation, so phasers usually employ multiple stages—multiple all-pass filters—in series, typically from around 4 up to as many as 10 or 12, adding additional notches for a stronger tonal variation.

For the classic phasing effect, just as with flanging there’s a periodic sweep added, but in this case it sweeps frequency—this moves the notches up and down, and since the tonal alteration the all-pass filter Stages produce is usually more subtle then with Flanging, the sweeping effect of Phasing has, again, a gentler whooshing quality, making it easier to get a subtle, useful effect on more complex signals, or incorporate the phasing effect into a busier mix.

Different makers of phaser pedals and devices took varying approaches—they used different numbers of Stages, and designing the periodic sweep of the all-pass filter frequency was apparently a bit complicated in the analog domain, so their choices resulted in a wide range of different phasing characteristics in the various classic analog phasers from companies like Electro-Harmonix, MXR, Maestro, Eventide, and many others. 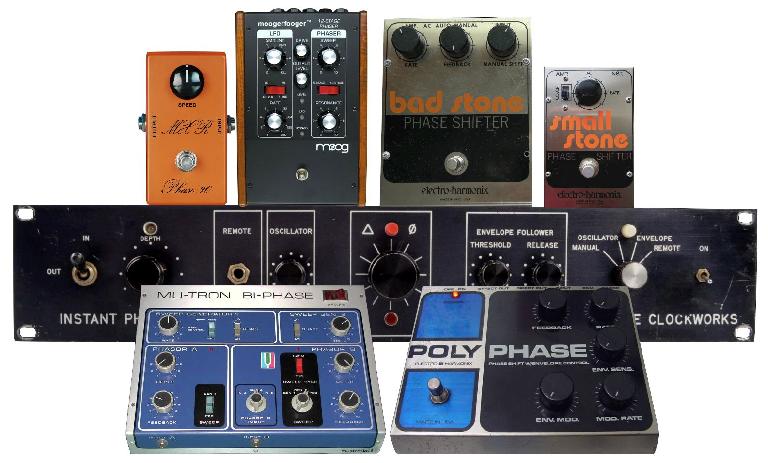 Phasing on drums and Rhodes EP

Playing With The Toys

Most Flangers are relatively simple, with controls for Delay Time, Sweep Rate, Feedback, and Mix balance (original vs delayed copy). Many Phasers are even simpler, sometimes offering only control of Sweep Rate, with the number of Stages (and other parameters) fixed. But some plug-ins provide much more user control—for example, many Flangers and Phasers can sync the sweep to session Tempo; Logic’s Phaser includes two sweeps and a frequency range setting for the sweep; Soundtoys’ Phase Mistress not only has user settings for the number of Stages, initial frequency, sweep rate, and resonance (to intensify the effect), but under the hood there are many more parameters that offer more creative modulation possibilities and mimic the various quirks and distinctive character of many of the classic analog phaser designs. 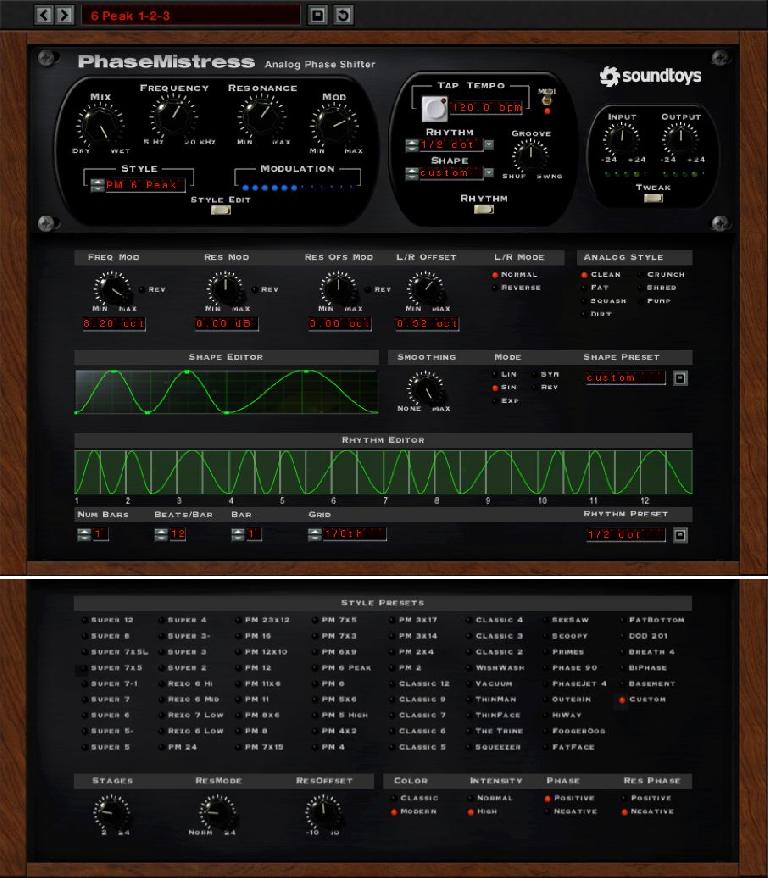 Both Flanging and Phasing can be employed to add a little spice to a track, either for their classic sweep effects or even for more adventurous modulated sounds. And a little technical knowledge about how these effects are created can help not only in choosing the best one in a particular situation, but also in dialing up the most suitable character when a nice rich flangey or phasey sweep is called for.

Learn more about mixing techniques in the AskAudio Academy here.