Patchbays are not always well understood but they're a core part of many recording studios. Joe Albano explains everything you ever wanted to know about them.

In the heyday of the analog studio, the patchbay was the center of all signal flow. Almost everything was routed through it, allowing for maximum flexibility when selecting audio sources, switching modes from recording to mixdown, and patching in outboard rack effects for all studio operations. Nowadays, most of the equivalent routing is done inside the box, via the use of menu selections for source and destination, but patchbays still provide plenty of utility even in a modern DAW room. Let’s take a brief look at the ins and outs of the classic studio patchbay.

Inside the box, most signal routing in virtual mixers is done computer-style—an output selector is normally a popup menu where the destination of the signal is chosen, completing the “patch”. However, there are a few exceptions. Some programs—like Reason—use graphics that replicate traditional patchbay connections, complete with virtual hanging cables. And of course many virtual synths—especially those that emulate analog models—also incorporate patchbay graphics with virtual cable connections. But the majority of DAWs make those connections without the visual reference of the actual signal flow—a cable from point A to point B—that a traditional patchbay provides. As a result, while most modern users are well-versed in signal routing, the setup and layout of a traditional patchbay is probably much less familiar. 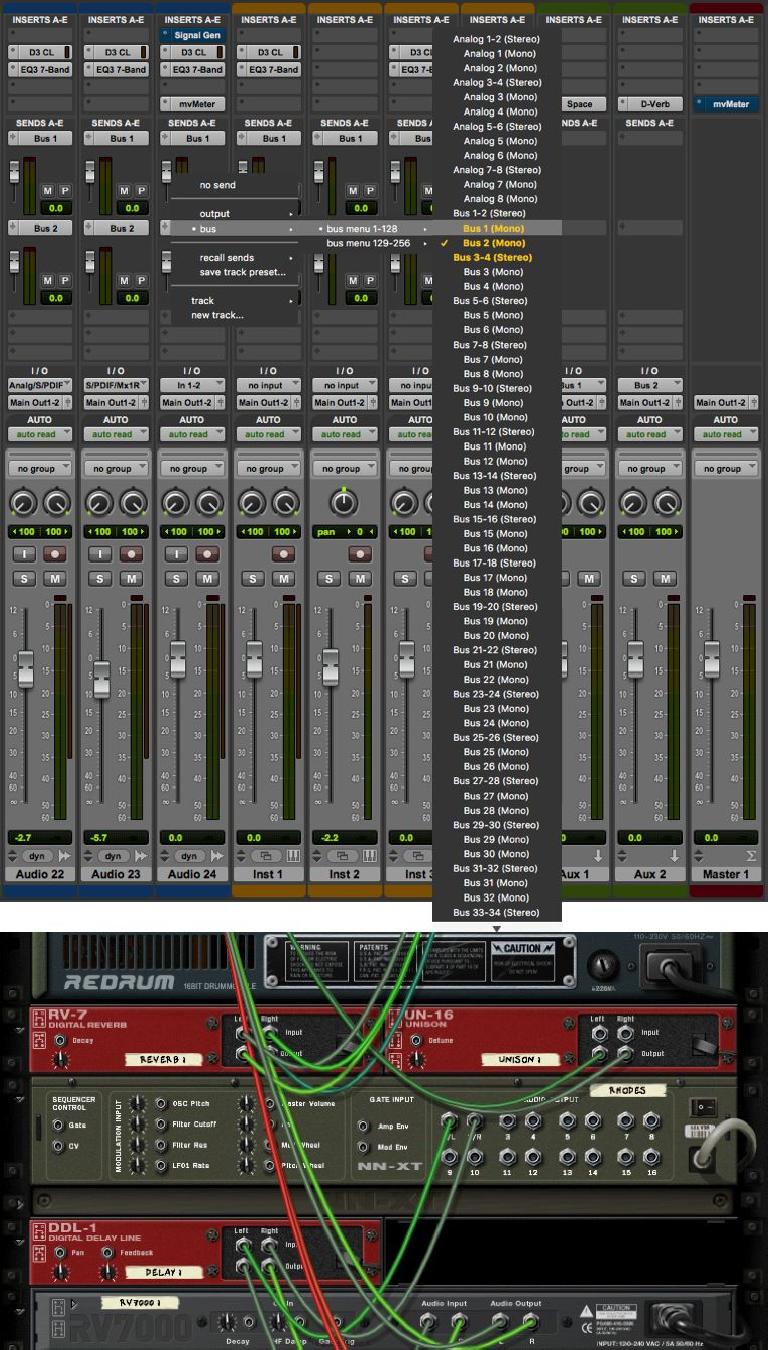 In a mostly in-the-box DAW studio an analog patchbay’s routing and connection options are primarily limited to signal flow in and out of the DAW interface, making connections between gear in the studio and the virtual mixer in the DAW. In a larger studio however, one that incorporates a traditional analog mixing console—especially a classic large-frame console—patchbay routings would be far more extensive, supplying connections between the console and other outboard gear that would be handled inside-the-box with a virtual mixer. I’ll briefly touch on both applications—a smaller patchbay setup for a virtual studio, and a larger one for a more traditional room with analog mixing—in a minute.

Whether the patchbay in use is a small basic one or a large comprehensive setup, there are a number of standard features and conventions. The idea of the patchbay is to bring connections between equipment—that would otherwise have to be made by plugging and patching cables using the jacks and connection points on the rear panels of all the studio gear—out to the front of the bay, with all patch points in a single central location, making routing access far more simple and efficient.

Most patchbays consist of dual rows of jacks. The smaller 19” rackmountable bays that would most likely be used in a DAW-based studio might typically have 24 pairs of jacks, front and back. Studio gear would be plugged in to the rear connections, in a more-or-less permanent hookup. The corresponding front-panel jacks provide access to the connections, via short patch cables for signal routing. Some of these connections may be completed even without the use of patch cables—more on that in a minute.

Smaller, more inexpensive patchbays typically utilize 1/4” connections—ideally TRS—for both front and rear panel jacks. Some higher-end bays utilize solder terminals round back instead—the idea is that since the rear-panel hookups are usually permanent, soldered connections are more reliable in the long term than jacks and plugs, which may be more likely to oxidize or develop intermittent connections. Another rear-panel option is DB25 multipin connectors—some consoles and high-end interfaces utilize these for i/o (to save space). Some high-end bays employ smaller front-panel jacks to allow more patch points in the same space. Professional TT (“tiny telephone”) jacks and patch cables are probably the most common format.

The usual layout approach for a patchbay is referred to as “output over input”, referring to the pairs of connections in a patchbay row. A connection from the output of the console/interface or a particular piece of outboard gear is hooked up to a top rear jack; that signal then appears at the corresponding top front jack, where the most common input for that particular signal is located right below—output over input. The back panel connection for the bottom front-panel input jack then connects to the corresponding input on the destination device.

Now, while the output-over-input paradigm is common, it may not apply to every type of patchbay connection—it’s most applicable to semi-permanent connections that may need to be re-routed only occasionally, rather than connections that have no common routing, and would be constantly patched to different destinations. So tape recorder/interface ins and outs routed to a traditional console’s or DAW’s ins and outs would likely follow the outs-over-ins approach, while i/o connections from individual rackmount processors might not.

Along with the outs-over-ins approach, many patchbay connections are wired to allow signals to flow between top and bottom patch points without the need for front-panel patch cables. This is to keep the bay as uncluttered as possible—while a jumble of patch cables may look impressive in a modular synthesizer, the same thing in a large studio patchbay only makes it harder to trace and make connections during sessions. The internal wiring that provides internal patchbay connections is called normalling.

Again looking at a typical row of patchbay jacks—outs over ins—a normalled connection would mean that the bay—or some connections in the bay—would be wired so that signal would “normally” flow from a top jack to the jack just below, without any need for a patch cable between those two patch points. That means that the output from whatever signal source is plugged into the corresponding rear-panel top jack would not only appear at the front but also automatically flow to the bottom jack of that pair and out the corresponding bottom rear-panel jack to the signal destination. Again, a standard use for this would be tape/DAW i/o to/from analog mixer channels, maintaining, say, 24 channels of mixer recorder i/o without a jumble of patch cables constantly obscuring other patchbay connections, but still allowing for easy front-panel re-routing when necessary. 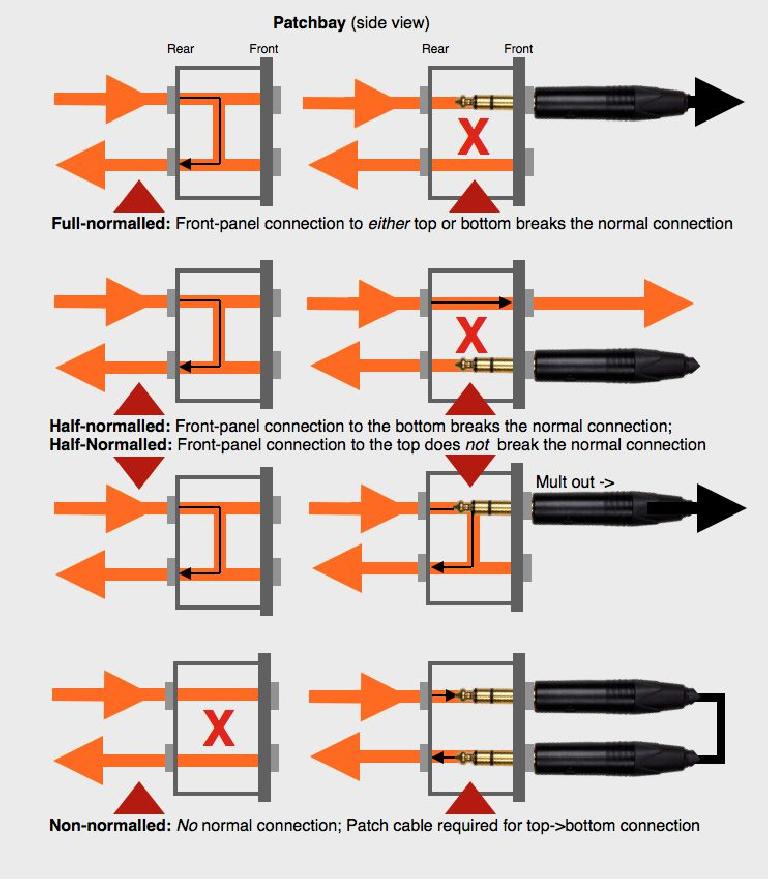 A non-normalled hookup has no connection between the top and bottom jacks in a pair—no signal automatically flows, and must be routed with a patch cable for any connection to be made. This would make the most sense for sources and destinations that don’t normally flow from one to the other. A good example might be the ins and outs of a rackmount processor, like a hardware reverb or compressor. While it might be convenient to make rear-panel connections for such a device to the same pair of jacks simply for convenience—keeping them together on the bay—you wouldn’t want signal to flow from a compressor’s output back to its input—that would be a feedback loop. Instead you’d patch that compressor in to different console channels as needed/desired, establishing signal flow to/from the appropriate channel(s) strictly via patch cables.

For smaller DAW studios, where the mixing is done in-the-box via the DAW’s virtual mixer, a smaller patchbay setup—typically made up of one or more small rackmount bays—will usually incorporate a couple of signal connections. One will be to bring out all the ins and outs on the back of the interface to the central patchbay location. Other connections through the bay would likely be the ins and outs of all the analog outboard gear in the studio—whatever preamps, compressors, EQs, or channel strips make up the studio’s analog “front end”.

If only one track at a time is recorded—as with many smaller studios—a patchbay may not really be needed, as long as the number of ins and outs on the interface is sufficient for all the outboard gear to have individual connections—the appropriate source would just be selected via input menu within the virtual mixer. But if there’s more gear than inputs—alternate preamps or multiple keyboards/synthesizers—and different sessions use different pieces, or if several channels are recorded together, with different processors used for different sessions, then having all those patch points on the front of a patch bay would make for far more efficient (and professional) sessions.

Even if most of the mixing may rely strictly on virtual processing, a producer might want to utilize one of those same front-end processors later on on a track in the mix. Being able to insert that unit via patchbay points that correspond to its own i/o and extra outs and ins on the interface would be preferable to rooting around behind the equipment racks. And if a guest producer brings a piece of his own outboard gear, or a musician brings his own processor rack, patching it in through a bay is, again, both more efficient and more professional. Other connections might include musicians’ cue mixes (from Sends->extra interface outputs); MIDI sound modules (to extra interface inputs->Auxes); etc.

Many producers/mixers still like to mix on a traditional analog console—especially refurbished vintage consoles known for their classic analog “sound”—and so it’s still common for medium to larger studios to have such a console as the centerpiece of the room. In that case, the patchbay will be much more elaborate. In addition to the basic i/o and outboard gear, all the internal mixer routings made inside-the-box with a virtual mixer—subgroups, send & return hookups, cue mixes, etc—will be brought out through the patchbay. Additionally, most larger consoles have multiple insert points to allow for inserting outboard gear at various points in the signal flow—pre-EQ, post-EQ, pre-Fader, post-Fader, etc, and all these will usually be (normalled) connections on the patchbay. 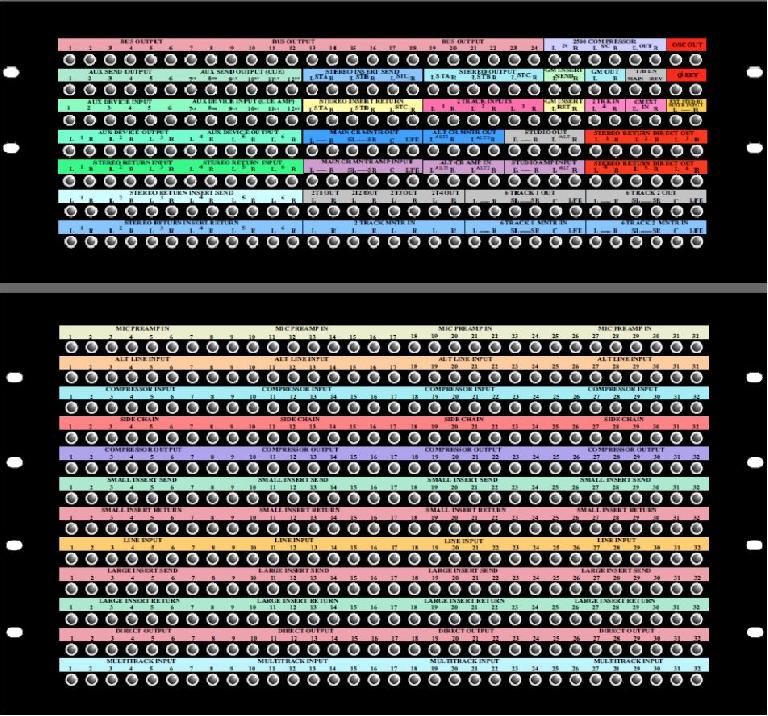 Many larger-frame consoles include the patchbay (typically TT-format to allow for the many connections), often establishing a color-coded layout of console connections, leaving tape/DAW i/o and outboard rack gear to be wired in (usually soldered at the rear) by the studio operator.

The specific layout of a patch bay in any studio will, of course, depend on that studio’s gear, i/o, and the operator’s needs, but with a little familiarity with patchbay standards and connections, it shouldn’t be too difficult to set up (tedious, maybe, but not difficult), making for a superior studio experience for both operator and client.