MP3 is Dead! Expired Patents and Why AAC Is A Better Compressed Audio Format

You may have read about MP3 being discontinued recently. Joshua Casper explains and demonstrates why it doesn't matter and how AAC is superior for those who choose to listen to compressed audio.

As better compression methods have been picked up by large distributors like TV, iTunes and radio broadcasting, the team behind MP3 have decided to let their patents expire, effectively ending .MP3’s reign as the go-to audio compression method.

While the story has been widely shared in the past few weeks I want to take a brief second to show you a real-world example of why AAC is better and the change is actually a good thing for consumers of compressed audio.

The Official Statement by Technicolor and Fraunhofer IIS:

“On April 23, 2017, Technicolor's mp3 licensing program for certain mp3 related patents and software of Technicolor and Fraunhofer IIS has been terminated.

“The development of mp3 started in the late 80s at Fraunhofer IIS, based on previous development results at the University Erlangen-Nuremberg. Although there are more efficient audio codecs with advanced features available today, mp3 is still very popular amongst consumers. However, most state-of-the-art media services such as streaming or TV and radio broadcasting use modern ISO-MPEG codecs such as the AAC family or in the future MPEG-H. Those can deliver more features and a higher audio quality at much lower bitrates compared to mp3.”

Audio compression is about one thing and one thing only. File Size. Getting smaller files that still sound good. First, it was about physical space; now it’s more about streaming.

After running an audio source through both compression algorithms, with the same settings (44.1 kHz, 16bit, 320 kbps) the file size is usually roughly 14-15% that of the original.

I ran a few tests for this article and while the numbers weren’t exactly the same between the two file types the difference was relatively insignificant. However, it should be noted that .AAC was consistently the larger of the two by a couple of hundred bytes.

So, if the switch isn’t that, what is it?

If you keep the bitrates high, say 320 – 256 kbps, one might be hard pressed to notice the difference between .MP3 and .AAC file qualities. In fact, even distinguishing between them and an uncompressed .WAV is difficult for most people.

Where .AAC starts to shine is lower bitrate compression quality. This is extremely important in the age of the internet. The best way to demonstrate this to you is to show you the results of iZotope’s Ozone’s Codec Preview Module. If you look at the peak meter when you start converting the uncompressed audio to lower and lower compressed bitrates you will see clipping introduced in greater amounts.

The clipping that occurs is from rounding errors by the encoding process that introduce sound artifacts. That is why when you are bouncing an uncompressed master that is destined to be converted to .MP3 or .AAC it is recommended to do so with a ceiling of around -1.5 dB.

An example. For demonstration purposes, I have the maximizer ceiling set at 0.0 dB. 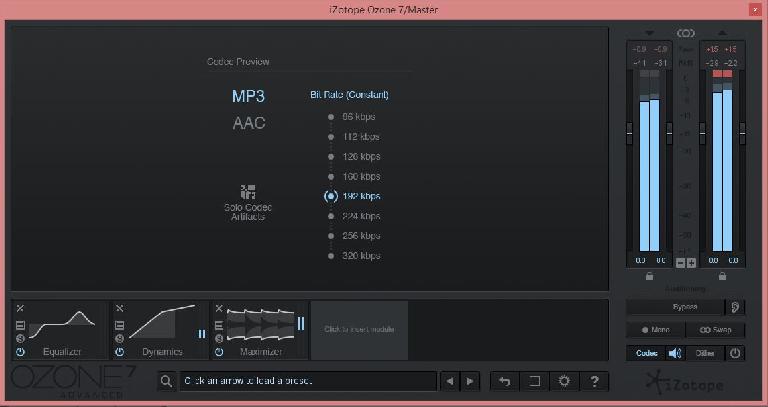 As you can see, there is a bit more noise being added by the .MP3 encoder than that of the .AAC. This is just from one example, but rest assured the results are consistent. So, when you have massive websites like SoundCloud that are using 128 kbps as their default streaming rate and that 0.3 - 0.5 dB of noise is going to start making a big difference.

Hence, iTunes and Youtube have been recommending AAC for quite a while.

“When iTunes launched, the, decision was made to standardize on AAC instead of the more popular MP3 format simply because AAC clearly provides superior audio quality compared to other codecs at similar bit rates. In working with Dolby and Fraunhofer, there have since been further improvements to AAC to get it to the level of excellence experienced on iTunes today.” - iTunes – Mastered for iTunes

The reference document for iTunes - Mastered for iTunes can be downloaded here.

MP3 is dead or almost so and that’s a good thing for audio lovers that need compressed audio files formats either for streaming or storage. Heck, if the creators of it say .AAC is the right way to go I think we can trust their opinions.

Obviously, uncompressed lossless audio is always going to win in any quality battles, but even with the advances in the affordability of disc space that is still not an option or entirely necessary for non-audiophiles.

Learn audio concepts in the Ask.Audio Academy that will take your productions to the next level.