Language
All good things must come to an end... even the awesome Moog 500 series analog effects units. But don't despair... you've got one last chance to get one of these before you bid them a fond farewell.

We're almost overcome by sorrow at this news, so we'll hand you over to Moog Music's press release with details on how to pick up a 500 series analog efefcts moules before it'g gone for good...

We're officially bidding a fond farewell to the 500 Series family of analog effects modules. We will continue hand-crafting the final modules at our factory in Asheville, NC, while parts and materials last. Though an extremely limited number of units remain at authorized Moog dealers nationwide, all 500 Series modules built in 2017 will be available with special end-of-production pricing exclusively at Sweetwater Sound and Vintage King Audio in the U.S. and internationally through our Authorized Distributor network. 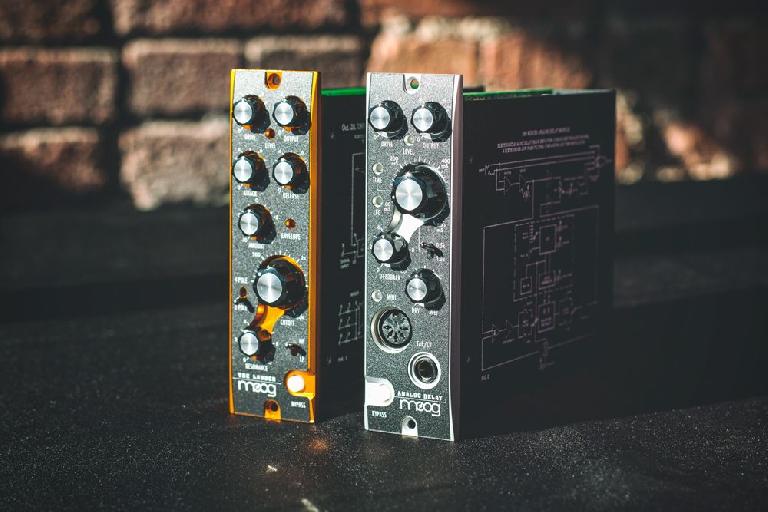 The Moog 500 Series family of analog effects made its debut at the 131st AES show in October 2011. The Ladder was the first of its kind in the format--a dynamic low-pass/high-pass filter based on Bob Moog’s original ladder filter designs. This unique module allowed recording engineers to dynamically process existing sounds through a completely new palette of harmonically expansive, overdriven and thickening analog circuits.

The following year, at the 2012 AES show in San Francisco, the 500 Series Analog Delay was unveiled. Building on Moog’s legacy in BBD-based analog designs, the 500 Series Analog Delay was first informed by the renowned MF-104 Analog Delay pedal. Over the course of its extensive development, a series of critical design advancements resulted in the creation of a truly preeminent analog delay with MIDI control, un-emulatable character, and extensive sonic depth.

This is your last opportunity to purchase these units before they go out of production. Use the Moog Music dealer locator to find a Moog dealer in your area.

VenC
Any word on what â€“-If anything for that matterâ€“â€“will be replacing these modules? I hope it's something even cooler sounding.