Guitars generally work in mono but by adding stereo effects with these plugins you can increase the space and size of your guitar tracks. Read on to find out how it works.

When working in our home studios, many of us record guitar tracks in mono, with a DI directly into the DAW. From there, you might apply a guitar amp simulator plug in, or run it through some reverb or an effect. But sometimes it’s effective to apply a mono to stereo plug directly to that guitar and get creative with it. Let’s take a look at a few cool plug ins that can bring some stereo life to that mono guitar signal.

When recording mono guitar and choosing to make it wider, I often track the part again and pan each take to opposite sides. This way, there’s a wider image and by tracking it twice, you’ll achieve an organic ‘rub’, meaning the imperfections of each part will create a natural stereo effect. The double tracking always creates a bigger, thicker part and I often like the ‘mistakes’ when trying to play the part exactly the same twice.

However, there is an alternative production option, which is to directly apply a mono to stereo plug to that guitar track. It’s a form of ‘stereoizing’ a mono source and it will simply widen the image with a stereo path. Obviously, unlike an actual double track, it’s the same exact part just coming out of two sides. But you can get very creative with it. Here are a few plug ins and audio examples that can widen, deepen and create something more sonically interesting than a single track. 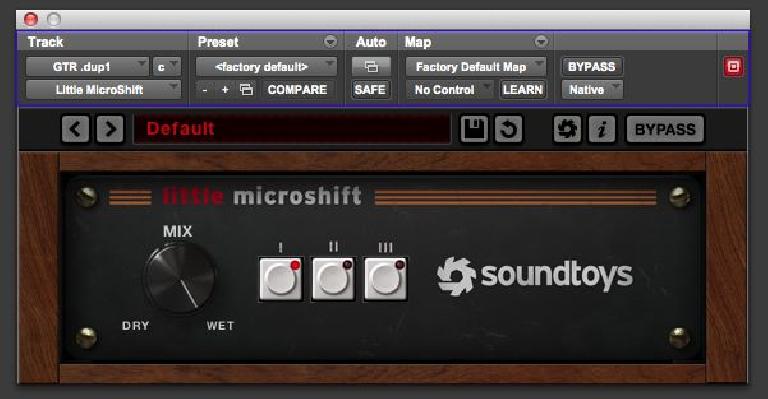 “It’s three iconic versions of that old studio trick,” said Mitch Thomas, Product Specialist from SoundToys. “The original Micro Pitch Shift from the Eventide H3000, the updated preset and also the one from the AMS DMX 15-80s. It’s just a great tool for instant width.” I happen to use the Little Microshift on mono to stereo guitars, because it’s just so easy. In fact, often I will not even tweak any settings, just add it and go. The only settings are a Wet/Dry Mix knob and three choices of widening, but hey, it does exactly what I want it to, add instant ‘vibe’. 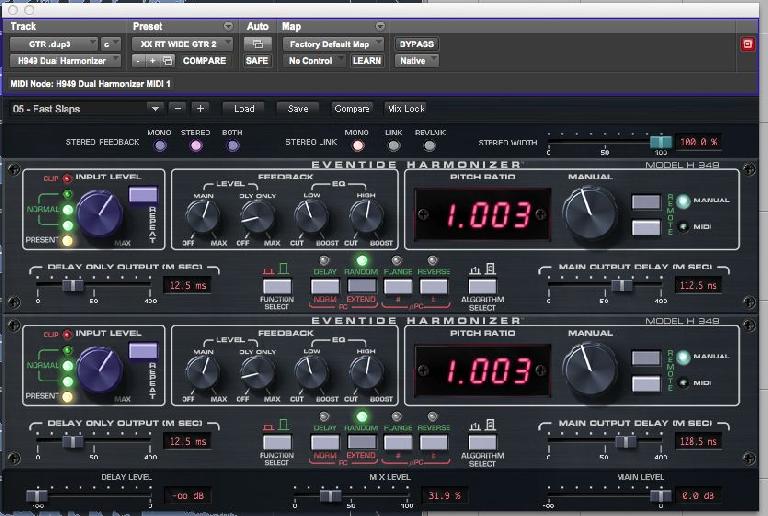 The Eventide H949 Harmonizer plug in offers 3 octaves of pitch change as well as micro and random pitch, flanges, delays and even a unique reverse mode. The Dual H949 mono to stereo delivers the sound of two H949’s running in parallel, which opens up a whole new world of width and doubling for that guitar track. There’s a basic preset called Fast Slaps that I tend to start with, and sometimes I’ll cut the lows a bit and add some highs in the Feedback EQ section, which cleans up the thickness. The Mix level on the bottom allows me some Wet/Dry control, which is important when adding the plug in directly to your guitar track, so you can choose as much or as little effect as desired. Sometimes I’ll also add a second dual H949 with an octave pitch below and sneak it in for a nasty low effect.

Another easy-to-use plug in that can add character to that guitar part is the Thermionic Culture Vulture. Based on a classic piece of all-tube hardware, the Culture Vulture adds harmonic distortion in just the right way. Taking that mono to stereo guitar, if I want to widen the image and add just a touch of grit, I’ll do nothing but push up the Drive knob to around 3 or 4 with the Distortion Type on its default of T (Triode). Or to push it farther, I’ll choose P1 (Pentode 1) and push the Drive up past 6 or 7. Since the signal tends to clip at that point, I’ll bring down the Output Level to compensate for the incoming level. Then I’ll switch the Low Pass Filter down to the 6 kHz position, which smooths out the signal. It’s a bit of tube character that’s not an amp and not a distortion box - and that’s what’s great about it.

This new release, also from Universal Audio and Brainworx, adds a ton of attitude to that guitar part. The default setting out of the box is full of aggression and punch, and I simply pushed up the Presence A knob to get a bit more clean edge and I had a nasty tone. There are 4 switchable channels in this monster, Clean, two Crunch and a Lead. For those with a Universal Audio Apollo, it now works as a Unison plug in, which means (joyously!) that it can be tracked with near zero latency. If you want some effects, the Brainworx FX Rack included Delay, a Noise Gate, high and low pass filters and Power Soak, which lets you add even more overdrive without Output gain. Often when I track heavy guitars, even if using a mono to stereo plug in panned hard left and right, I will track a second pass and pan it up the middle with a completely different amp sound. 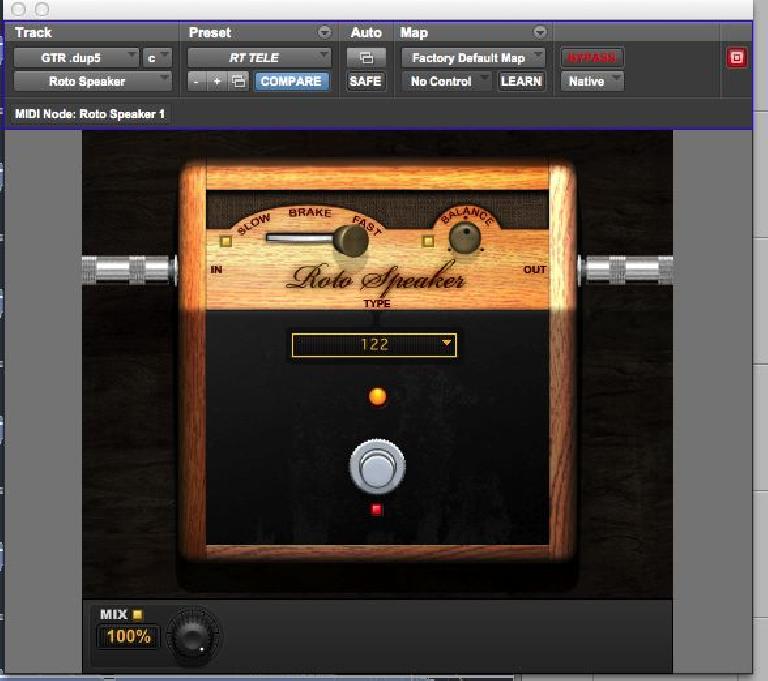 Inspired by the classic rotary cabinets, this easy to use stomp box plug in from Avid adds immediate ‘vibe’ to your guitar track. Like all the other instances, mono to stereo adds width and depth to that single guitar track, and there’s nothing to tweak except Speed, Balance and Tone. Speed selects the speed of the speaker effect with slow, fast or brake, Balance selects the blend between the upper and lower rotors and Type selects a variety of rotary speakers. Add a bit of room sound and reverb to your sound after the Roto Speaker and your guitar just took on a new level of cool.

So next time you plug that guitar into your DAW with a single mono channel, and want to try adding some depth and character, try experimenting with a mono to stereo plug in. Also experiment with the panning, moving one side in and leaving the other wide. Sometimes I might even split that stereo track into two mono tracks, and offset one by a few milliseconds, creating a natural delay. Then I might add an effect to one channel and not the other, just to create something different. Mono to stereo isn't always the answer to making that guitar sound bigger, but sometimes it's just right.

Learn more mixing tips and tricks for all music genres:https://ask.audio/academy?nleloc=topic/mixing