Correctly calibrating your monitors using software like Sonarworks' Reference 4 can help your mixes by providing more accurate sonic reproduction. Joe Albano shows you how it's done.

Most experienced mixers have learned to compensate in various ways for the irregularities in the frequency response of their monitor speakers—typically by checking their mixes on multiple speakers and headphones and by playing a wide range of commercial reference material through them. Of course these techniques will always be helpful, but having a calibrated set of main monitors and headphones to check a mix in a specific environment can definitely be beneficial to the mix process. With a more neutral and consistent primary tonal reference, it should be easier to achieve mixes that not only sound better and more well balanced, but also translate well onto any playback system.

The Reference 4 Measure system and Reference 4 plug-in allow you to calibrate any set of speakers to create a more reliable monitoring environment. Here are a couple of observations and suggestions regarding the calibration procedure and the application of the Reference 4 software, based on my experience of setting up and using them to calibrate my monitors.

Lately I’ve been doing more mixes in my home studio. The room benefits from good dimensions and careful placement of the speakers and listening spot (to minimize standing wave effects), but has minimal acoustic treatment, unlike my previous commercial space which utilized numerous wall panels and ceiling clouds—currently the only treatments are some absorptive panels on the front wall, and some bookshelves in the back to diffuse sound a little.

I’m well aware of a number of frequency response anomalies with the pair of older KRKs I use there. These include the expected standing wave issues—variations in bass response at different spots in the room due to low-frequency reflections—and the inherent character of the speakers, which is somewhat more mid-rangy than a lot of bright, crisp modern speaker designs. They’re great speakers and not at all fatiguing on longer mix sessions, but they could still certainly benefit from a more even response. 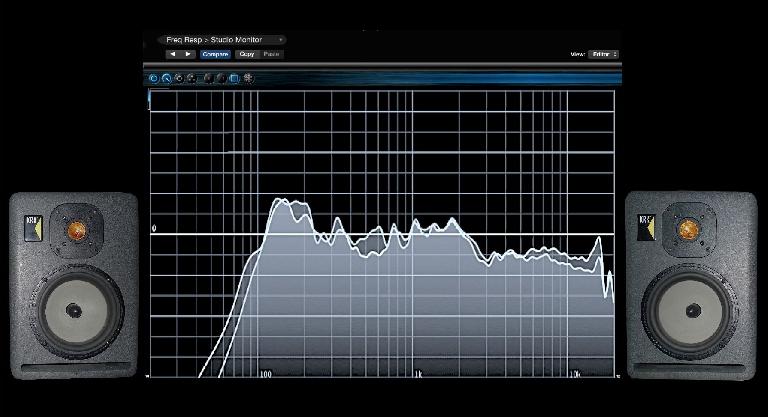 Studio monitors to be calibrated with Reference 4

Now admittedly I’d always been a bit hesitant to go down the route of using EQ to flatten monitor response, for a couple of reasons. In the past it limited you to one narrow listening position, and also it can’t completely compensate for standing wave issues. But the Reference 4 Measure system is designed to account for more than just the response in one very narrow “sweet spot”, which is the primary listening position when mixing.

The Reference 4 Measure software is designed to be used with the company’s own supplied reference mic, and the measurement process is much more comprehensive than just positioning the mic between the speakers and running noise or tones for a few seconds. The system guides you though a series of measurements that are designed to account for monitoring level, speaker-to-speaker distance, speaker-to-listener distance, speaker-to-listener angle and room effects in the nearfield area (the area surrounding the sweet spot).

After measuring out these distances and taking readings right up at the speaker grilles themselves, you’re directed to reposition the mic for no less than 37 different measurements, ranging from dead centre between the speakers at the sweet spot itself, to a variety of locations around that spot—to the left and right, slightly in front and behind and so on. By outputting test signals, the software detects when you have the mic in each one of the correct locations, and then directs you to hold there while it plays the actual measurement signal sweeps.

Based on my experience I’d recommend trying to be as accurate as possible when positioning the mic at the multiple measurement locations requested by the calibration procedure, especially regarding height. All the measurement positions require the test mic to be at the ear-level height of the primary mix position, which is usually seated height. It’s easy to forget to keep the mic at a consistent height as the software detects position, and accidentally varying the height of some of the measurements too much could potentially skew the results.

Once all the measurements have been taken, the correction curve is applied in the Reference 4 plug-in, instantiated as the last plug-in on the master stereo channel strip in the DAW. Thanks to all the measurements taken at and around the sweet spot, the resulting correction should work reasonably well not only in that one pinpoint location but around the sweet spot as well (though of course room modes will still have their usual effect if you move too far afield).

By default, the Target curve is ruler-flat (as shown), and you have the option to also display the original measured curve of the speakers’ original response in that room as well as with the corrective EQ applied, which can be very informative. In my case, it confirmed some of the response irregularities my ears had picked up on.

For those unfamiliar with reading frequency response graphs, what you’re looking at in the middle screenshot (above) of Reference 4 is the measured response of the speakers, which takes into account the room’s effect at the measurement positions. It’s the relative amplitude levels (the vertical axis, in dBs) at different frequencies (the horizontal axis, from 20Hz to 20kHz).

A response that showed as a flat line would be ideal, but for a speaker/room response small deviations from that flat line are normal and not especially problematic. But deviations of more than a few dB indicate areas that would be likely to affect your judgement in mixing—both when balancing levels, and especially when applying EQ—making you think there’s more energy at those frequencies in the mix than there really is, which leads to adjustments that won’t sound right in other rooms with different frequency responses.

In this case, there are a couple of areas to note: There’s a bump of around 5dB or so between 100 and 200Hz, probably due to a combination of room modes and the speakers’ ported design. That could easily affect decisions made about how the bass and kick should be EQ’d, and how they sit in the mix. There’s a similar bump between 700Hz and 3kHz, although you could also view that as a dip in response between 200Hz and 700Hz, and a falling treble response above 3kHz.

That’s what the calibration software did—you can see in the bottom screenshot that while it slightly reduced the level in that area, it mostly bumped up the response below and above it, flattening levels in those critical midrange and upper midrange areas. Deviation in that range—from 700Hz to 3kHz—would potentially affect many mix decisions, from overall balance, to reverb levels, to prominent aspects of the mix like the level of the lead vocal and snare drum.

That midrange bump was also likely imparting a little general cloudiness to the uncalibrated response, something I’d noticed and was used to compensating for (in part by always checking the mids on a second pair of speakers with a more subdued midrange response). There’s also a difference of about 3dB between the two speakers’ responses in the 400-700Hz range—that could lead to questionable balance and panning adjustments, especially to parts of the arrangement panned widely to one side or the other. All of these potential problem areas were addressed by the calibration, as you can see in the bottom screenshot, which shows the correction curve against the original measured response.

With the Target Flat response, the high end might seem a bit bright (it did to me), especially if you’re used to a more subdued high end. Two reference curves provide slightly more typical responses, and there are a few very subtle controls for tweaking the curve to your taste. These controls are similar to the ones you usually find on the back of most monitors. A B&K reference curve offers a more gentle high end (B&K speakers are often preferred by mastering engineers). I ended up dialing up a similar curve that deviated a little less from Flat response using the Tilt control. 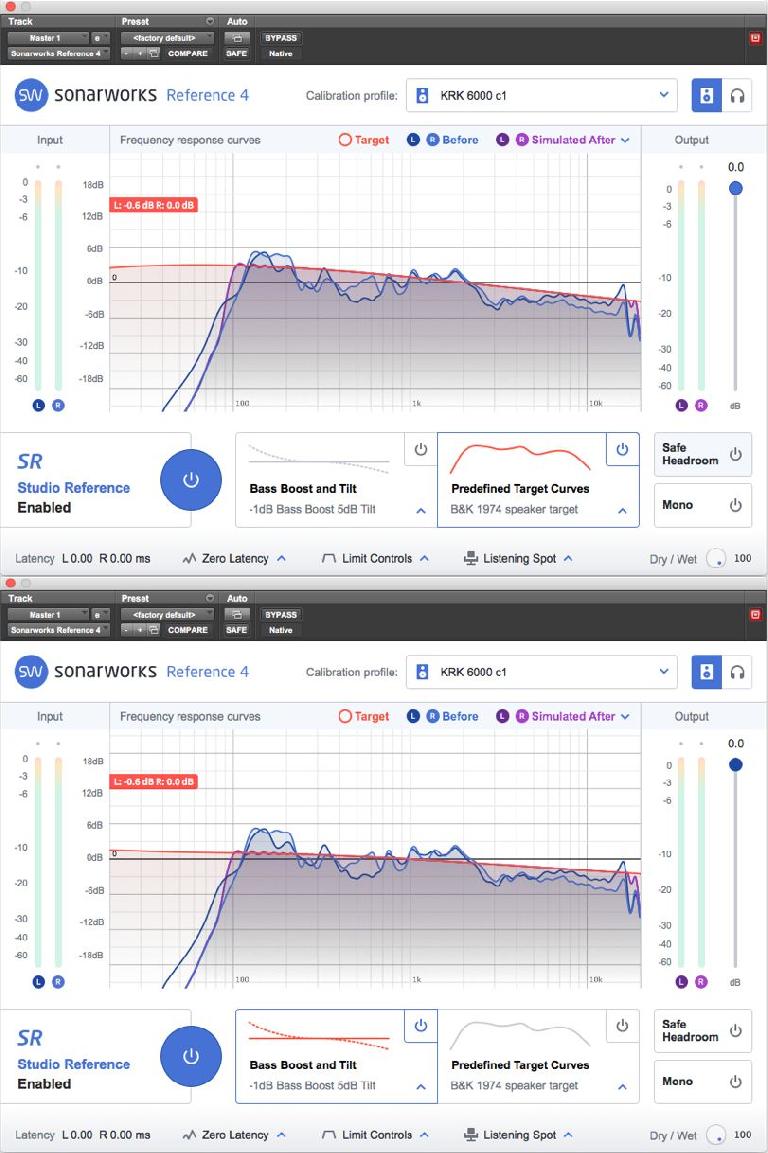 When you are mixing with the newly-calibrated speakers or even revisiting an older mix done on the same speakers prior to calibration I can suggest a few things to look out for in general, based on my own experience mixing through the Reference 4 plug-in, though some of these may be specific to my particular setup..

- Watch out for any EQ you may have used on the lower mids. This can be more of a reaction to room anomalies as a result of speaker placement, and speaker-to-room-boundary distance than to the actual tonal needs of those tracks in the mix. I found this to be the case on several tracks in an older mix, especially on the bass and kick. This is the kind of thing that might be detected when checking the mix toward the end in headphones or on another set of monitors, but the calibration quickly revealed it on the main monitors.

- Decisions about upper midrange and high-end EQ often have just as much to do with the tweeter response of the main monitors and the comb filtering caused by typical high frequency reflections such as those from a nearby computer monitor. When such irregularities are smoothed out by the calibration EQ you may find that far less EQ is needed on items like cymbals, hi hats and even acoustic guitar. I noticed it in particular on a hi hat in one older mix, which I’m sure would sound better with the less aggressive EQ settings to which I dialed down after checking the mix on the calibrated monitors.

- In the central midrange area, very small EQ tweaks and techniques like staggering EQ frequencies to carve out different ranges for different instruments in a busy mix can be made with more confidence on a calibrated system. This is because you can be more certain you’re not correcting for a speaker/room anomaly, but addressing a tonal balance issue that really exists in the mix itself. In one mix I picked up on an electric piano track that needed a big upper midrange EQ boost to cut through on the uncalibrated monitors, but came through just fine on the calibrated system with much more subtle EQ settings that—unlike the original EQ which sounded harsh when the instrument stepped out in the arrangement here and there—provided a smooth tone for the piano both inside the mix and during its occasional forays front-and-center in the arrangement.

More experienced mixers, especially those accustomed to a particular set of monitors in a specific room, may find that only a small number of level and EQ decisions are very noticeably different when remixing a song on the same speakers after calibrating them, but those small differences can add up to a significantly better mix. Indeed, one which has greater clarity and detail and which travels better across different playback systems thanks to the reliably flatter response of the monitoring reference. The calibration process may seem somewhat finicky, but it’s well worth the relatively minor effort for the benefits it can provide.