Language
Waves Trans-X is a transient shaper that offers more than a traditional compressor or transient shaper does. In this tutorial Joe Albano explores how to adjust attack transients when mixing drums.

One of the tricks that can be done with compression is using it to manipulate the envelopes of notes—especially drum notes. You can emphasize or de-emphasize both the transient impact and the ring of the notes, with a suitable compressor and appropriate settings of the Attack and Release controls. But this can be a bit finicky at times, and doesn’t work as well with every compressor. So a more dedicated type of dynamics processor came about, the Transient Shaper. These devices are dedicated to the manipulation of instruments’ attack transients, making easier work of it when this kind of adjustment is called for. Waves’ Trans-X is their version of this type of device, and it brings a little something extra to the table...

One For All or All For One

Wide is the wideband version, which processes the full bandwidth of the track—it’s good for single instruments and the individual drums of a multi-mic’d drum recording. Multi is a 4-band multiband processor, which allows for individual transient control over each of the bands, for more flexibility with tracks like a full drum kit, where it can allow for more targeted processing of different elements that fall mostly within certain frequency ranges. While Trans-X can do its thing on any percussive instrument—bass, piano, synth, percussion—its most obvious application is drums, so that’s what I’ll focus on here.

Both versions of the plug-in have the same set of controls (some for each band in Multi), which are used to both match Trans-X to the specific transient character of a particular track, and achieve the desired amount of processing. Operation is similar to a compressor, but the controls are a little different, so I’ll go through them briefly.

There are 4 main controls—Range, Sensitivity, Duration , and Release. These are roughly equivalent to a standard compressor’s Ratio, Threshold, Attack, and Release controls, though perhaps more specific in function. Range dials up the amount of effect you’re applying—how much you want to change the transient energy of notes in the track. Positive values increase the level of the transient impacts, for a punchier sound, while negative values decrease it, for a more mellow sound. In both cases, while the overall level of the notes will be altered, the effect is more like adjusting how hard the player is playing—positive Range settings will sound like stronger hits, while negative values will sound like a more laid-back playing.

Range works in conjunction with Sensitivity, which is a kind of Threshold control, but in reverse. Lower Sensitivity settings will let just the loudest transients be processed, leaving quieter notes alone, while higher values will cause most or all notes to be affected (Waves cautions against too high a setting). So if you wanted to emphasize the smack of, say, just the accented notes in a drum pattern, you might try a lower Sensitivity setting in combination with a positive Range, further accentuating those accents, as if the player had put more english into just those hits. Conversely, if you thought the performer’s dynamic swings were already too pronounced, you could combine that lower Sensitivity with a negative Range, taming the hardest hits, making the musical dynamics appear a bit more even. But if you wanted the overall character of the attacks to be either sharper or duller, rather than just certain more-accented notes, then a higher Sensitivity would apply the processing (whatever you dialed up) more uniformly to all notes, accented or not.

Duration is the length of the transient (attack) portion of the notes. When the transient is processed (accentuated or squashed), this control determines how much of each note’s attack will be affected. This can have a significant effect, and would be set in conjunction with the Range. Processing too long a segment can make for an overdone effect—the default is around 5 milliseconds (ms), and this seemed to work well on most of the drums I tried it on, with positive Range values (transient emphasis). With negative Range Settings—softening notes’ attacks—I sometimes preferred to increase Duration to around 10 or 15 ms, depending on the particular track and recording. Release sets the time for the signal to return to its original level after the transient has been processed. This acts like a decay control for the notes’ envelopes. Positive Ranges will tend to make notes sound shorter, so a longer release can counter that somewhat, if desired. Negative Ranges soften the transients, and a faster Release will bring up the tail of the notes—the ring—more quickly, for, say, a boomier drum sound. Again, these are tricks you can do with (some) compressors, but once you get used to its operation, it’s much easier here in Trans-X to dial up just the right values for this kind of creative tweakery.

Finally, Trim is like a compressor’s make-up gain—you use it to restore the overall level of the track against the mix. A convenient shortcut is to click the number in the Trim box—this will adjust Trim in accordance with the degree of gain change being produced with the current settings, to more easily avoid overloads, especially when emphasizing transients.

I tried out Trans-X on a couple of tracks, to see how it handled the kind of transient shaping I was used to doing with compressors. On individual tracks in a multi-track drum kit, it made short work of adding either fatness or punch to different drums. On kick, I decided to go for a slightly bigger, boomier sound—maybe more like a double-headed kick, rather than a single-headed kick with a lot if damping. With Trans-X Wide, I dialed up a large negative Range (-18), with a slightly increased Sensitivity, to +2.5 (higher Sensitivity settings produced more “boom”, but also softened the apparent playing a bit too much). To bring out the ring, I set a slightly longer Duration of 20 ms. I found I could subtly fine-tune the degree and character of the kick’s attacks by varying the Sensitivity and Duration controls—I finally settled on Sensitivity at +5 and Duration at 15, for a good compromise between attack and boom.

For the snare, I went the other way—I used Trans-X to effectively dampen it down, and impose a stronger crack to the hits. With Range at +12 (higher settings seemed to be overdone on this drum), I set Sensitivity to 0 (zero), so backbeats would be accentuated, while quieter little figures (ghost notes, drags, etc.) would be mostly left alone. I left Duration at the default setting of 5, but increased Release to 20, so the notes wouldn’t sound too choked. I also applied similar processing to the hi-hats, increasing Range to 12. This served to tighten up the closed hi-hat sound, lending a more “tick-y” character to the hats. You can hear all of this in Audio example 1.

Fig 2 The settings used for the various instances of Trans-X Wide in Audio example 1—Top to bottom: Kick, Snare, Hi-hat

Audio example 1 Trans-X Wide applied to several individual drums, as described above (4 bars each—Trans-X Out, then IN, Out, IN):

On a stereo track of a full drum kit, I inserted Trans-X Multi, to see how well I could control the separate elements of the kit. This time, I went for a punchier kick but a more laid-back snare. To punch up the kick, I set the upper-bass/lower-midrange band (centered around 100–200 Hz) to positive Range (+10, Sens +2.5), while dialing down the snap of the snare in the upper-midrange/presence band (Range +24, Sens +6). Once again, I tightened up the closed hi-hat, this time with appropriate settings in the highest frequency band (Range +12, Sens 0). In Trans-X Multi, Duration and Release are global controls, which in this case I set to 10 and 20, respectively. Trans-X did a nice job of individually processing the different kit pieces, as you can hear on Audio example 2. 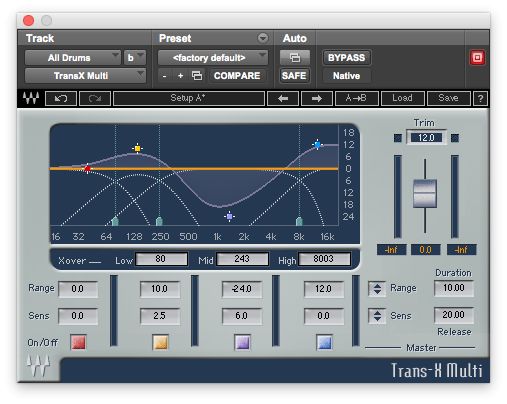 Fig 3 The settings used in Trans-X Multi in Audio example 2, to process individual kitpieces as independently as possible

Audio example 2 Trans-X Multi applied to the various drums in a single stereo drum track (4 bars each—Out, then IN, Out, IN):

Not Just for Drums

I tried Trans X on a couple of other tracks, besides the drums. On a bass, Trans-X did a decent job of softening the attacks, for a rounder tone, and on piano, Trans-X Multi was able to accentuate the presence and low-end thunk, while allowing the mids to recede a bit, for a more percussive piano sound that sat better in the mix (see Fig 4 for both bass & piano settings). 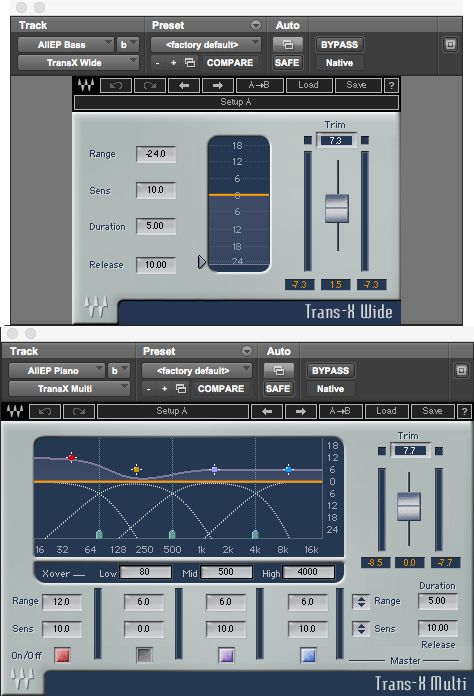 Fig 4 Settings used to impart a rounder tone to a bass (top), and a more percussive quality to a piano (bottom)

Audio example 3 Trans-X applied to full drum kit, bass, and piano, as above (4 bars each—All Trans-Xs Out, All IN, Out, IN):

So Trans-X can be an extremely useful processor when mixing, making quick work of transient adjustments, which can really come in handy as an alternative to EQ for making tracks sit better in a mix, or to traditional compressors for shaping instruments’ notes. It’s a particularly capable example of a Transient shaper, and well worth the (relatively short) time it’ll take to master it. With its two versions—Wide and Multi—Trans-X should be able to handle just about any troublesome tracks that need transient tweaking.