Software lets us create vocal harmonies even after the singer has left the studio, but there's an art to making the results sound believable, as Joe Albano explains.

Now that sophisticated pitch editing and manipulation features have become commonplace - most DAWs include this capability to some degree and there are plenty of third-party options - we tend to take for granted the ability to shape and massage vocals in ways that would have been unheard of years ago. One typical example of this is the ability to create vocal harmony parts long after the singer has wrapped up and gone home. Of course, technology notwithstanding, the best approach to making harmonies is still probably to let a good singer record them, but there are plenty of reasons - often logistical and financial - why this may not always be possible, and so modern pitch technology is pressed into service.

However, just as with many artificial means of creating what would otherwise be live acoustic recordings (sampled instruments etc), the results can sometimes suffer from a somewhat stiff and overly mechanized quality. This might be the case when a vocal harmony or two is created by duplicating a lead vocal and then applying editing and/or pitch shifting techniques to create a new version of it that will serve as a suitable harmony line. Fortunately, there are a number of ways to try to alleviate this kind of thing, and make artificially created harmony lines sound looser and more natural - this article will go over a few suggestions for “humanizing’ artificial harmonies.

Regardless of the particular type of pitch manipulation technology employed to alter the pitches of the source recording - the lead melody line that will be the raw material for the new harmony part - if the harmony part is an exact match in terms of dynamics, timing and phrasing for the lead, the result may be an unnaturally tight harmony rather than the more natural, loose pairing you’d get from a different performance. Now, certainly sometimes you might want this kind of superhuman harmony effect, but if you’re going for a more live feel, it would be desirable to have a little more of the normal human variation that always exists between performances, even if they come from the same performer.

One way to approach this could be to use an alternate take of the lead vocal part as the source material for the new artificial/transposed harmony line. It doesn’t have to be as perfect a take as the one you chose (or comped) for the lead - in fact, any small imperfections (as long as they’re musically acceptable for a background part)  will help distinguish it from the original.

Depending on how loose you want the harmonies to be (and how many takes you have to choose from), you can look for one or a comp of several that provide just the right degree of human variation appropriate to the musical/vocal style.

In the same vein as the previous suggestion, even if you don’t have any alternate takes to work with (maybe you’ve just been provided with stems rather than raw tracks), it might still be possible to find an alternate performance to use as the raw material for a pitch-shifted harmony line. This would be most likely for a Chorus harmony - if whoever recorded the tracks didn’t fly in the same chorus part for every occurrence, then there should be multiple versions of that same melodic material available. You could drag, say, the vocal part from Chorus 2 to a new harmony track under Chorus 1, Chorus 3 under Chorus 2, and Chorus 1 under Chorus 3.

If there are variations in intensity and timing... well that’s kind of the point - it’ll provide the desired humanization. If they’re greater than you’d like, hopefully the same pitch manipulation feature/software you’d be using to create the harmony pitches will also let you tweak the timing subtly as well, to taste. Remember, the harmony will be a background part, so you should have a bit of leeway there.

Most engineers and mixers know how to create a doubled part by duplicating the original, adding around 15-20 milliseconds delay, and then mixing the two together. Well, if you’re you’re creating an artificial harmony from a lead vocal part, and if no alternate takes or choruses are available, then you’ll be starting with an electronically doubled part, which you’ll then transpose/pitch edit to create the harmony. Since the pitches will be different, you don’t necessarily have to delay the new line to distinguish it from the original it came from, but if you want the harmony to be a little more natural/human then a similar 10-20 millisecond delay could prove helpful.

To give the harmony even more of that typical human variation in timing, you could modulate the delay for a little variation. Assuming the method you use to implement the delay allows for this (a delay plug-in for example), you could use an LFO to add a little slow, periodic modulation, making the timing of the harmony drift very slightly against the lead vocal. If you overdo it, this could sound a little chorusy, but there’e an even way to approach the modulation. If the option is provided, a little random modulation would be better than periodic (LFO) modulation. This could provide an effect closer to the natural, semi-random timing variations of human performers, so it might be just the thing. 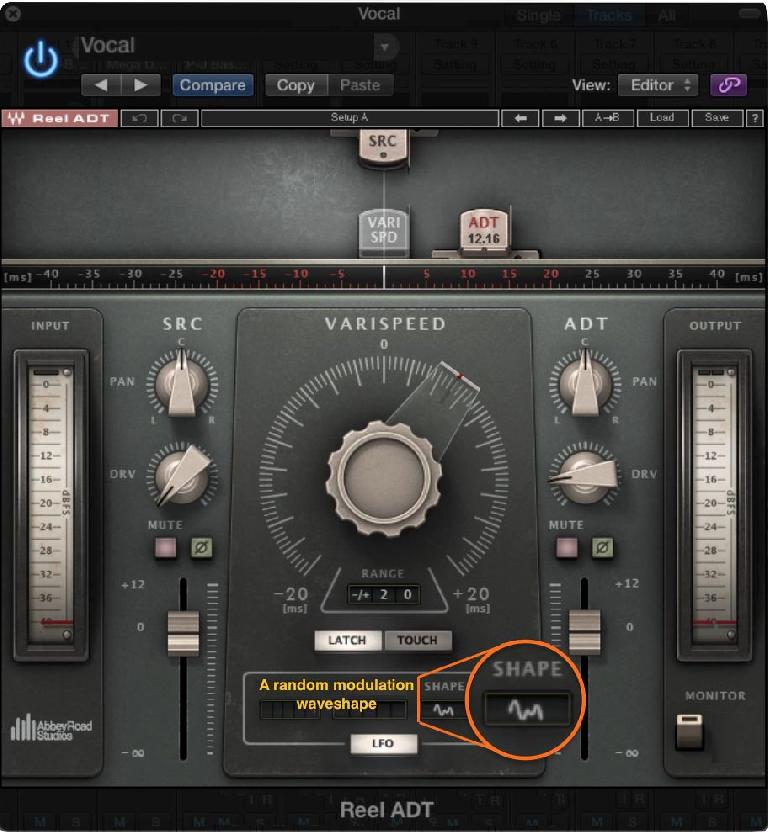 In fact, human/random variation is how the famous Abbey Road ADT tape-based doubling effect was done, with an engineer manually tweaking the tape’s varispeed. That effect has always been acknowledged as one of the best artificial doubling sounds, and it could be equally helpful when that double is turned into a harmony.

Some DAWs or pitch editing software may offer even more sophisticated, dedicated controls to humanize a doubled artificial harmony. A good example is Revoice Pro, an editing package with some cutting edge features when it comes to manipulating the pitch and timing of audio, especially vocals.

Revoice’s main claim to fame is its ability to match the timing and pitch of one vocal line (dialog or melody) to another. The main purpose for this is dialog replacement, keeping dubbed audio in sync with the lips in video/post applications. But the tools that make it excellent at that task also give it a lot of power to subtly manipulate the pitch and timing of a doubled vocal line, and its included Warp editing (manual pitch editing, adding flex) makes it an excellent tool for creating artificial harmonies that have some real life and natural-sounding human variation.

If you create a doubled part for a harmony in Revoice, the Doubling Process window there has quite a few options for adding a little human touch to the duplicate part. 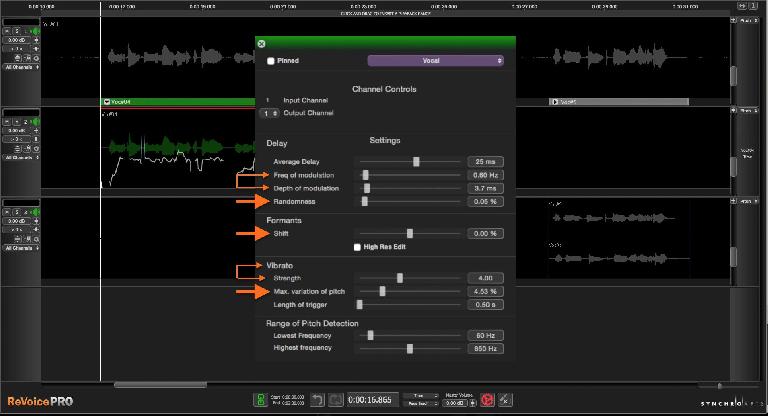 In the screenshot you can see several controls for adding variation to a double/harmony part (the squiggly lines in the selected wave indicate the pitch warping used to create the harmony line from the original doubled part). There are several settings for adding delay, with both periodic (LFO) mod, and random modulation, as I described above. A little artificial vibrato can be added, with controls for tweaking its strength and character. And you can also mess with formants, which I’ll discuss in the next paragraph.

Vocal formants are the natural resonances of the human voice - they’re a series of fixed resonances, determined by the size and shape of the throat, nasal cavity, head, chest - in short, they’re what make you sound like you. As I said, the frequencies of these formants are fixed. When a person sings a melody the pitches change but the formant frequencies do not. If you use software to artificially alter vocal formants, you’ll create an effect similar to what that person would sound like with a bigger head and body (raising the formants) as a smaller one (lowering the formant). Most modern pitch editors allow for this, on an overall or pitch-by-pitch basis. 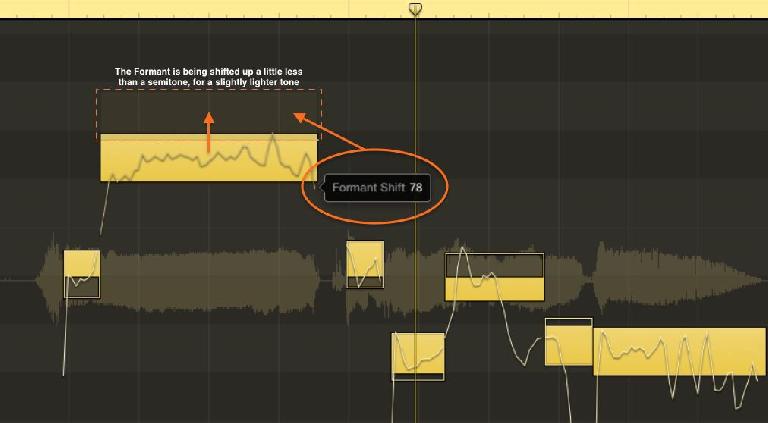 Usually, digitally tweaking the formants of a voice by more than a semitone or two will produce a noticeably artificial tonal quality - the common industry terms to describe this are “munchkinization” or “the Chipmunk Effect - think “Alvin & The Chipmunks”. But you might be able to apply smaller, more subtle formant tweaks to an artificial harmony line that’s been made from a double of the lead vocal, potentially changing the tone of the fake harmony just enough to distinguish it a little more from the tone of the original it was created out of.

Soloed, the slightly-formant-shifted voice probably will sound a little off, but buried a little under the lead, you could probably get away with just enough tonal variation to help avoid too much tonal “sameness” when the same singer is the source for all the vocal parts.

The best artificial harmony parts might combine a few of these subtle tweaks, and if the new harmony lines themselves are well-pitched and applied with appropriate musical discretion, it should be possible to create some very natural, very sweet harmonies, thanks to modern technology, whenever the need arises.