Mixing Tips: The Importance of Panning

Language
Have you ever wanted to re-create the spacial effects from your favorite band's performance or studio album? Using panning maps, Matt Loel T. Hepworth shows you how in this excellent mixing tutorial!

Have you every listened to a really dense piece of music and wondered: How did the producers and engineers make it possible to hear every note from each instrument? For instance, listen to the title track from the Oingo Boingo album Dead Man's Party. Danny Elfman wrapped layers of synth tracks, percussion, a brass section, and multi-part vocal harmonies around the core of a rock band. Yet, when you listen to the result, he and Steve Bartek created a mix wherein every single track can be heard clearly. How did they do it? Well, the answer might be simpler than you think. Let's explore the importance of panning.

(Note: Copyright prevents me from making the examples in this article downloadable. However, if you don't already have them in your music library, all four are available on the iTunes store. So you might have to spend a few bucks to hear the examples, but it's well worth it.)

Humans have left and right ears, which allow us to perceive sound waves in a 360-degree sphere. Sound is constantly coming at us from the left, right, front, back, as well as from above and below. More importantly, our brain processes the auditory impulses from each ear separately. Understanding that fact is critical to understanding the benefits of panning tracks in a mix.

Determining Where Tracks are Panned

There are generally two methods of panning tracks in a mix:

Spacial perspective is more easily understood than its fancy name might imply. Let's say you were playing a real piano. When you play notes below middle C, they sound louder in your left ear. Conversely, notes above middle C sound louder in your right ear. Notes at either extreme will have even wider spacing. So if you were wanting the listener to hear as if they were sitting at the piano while they were listening to your mix, you'd pan the low notes to the left, and the high notes to the right. (Most acoustic piano recordings are recorded with a minimum of a left and right microphone to capture the low and high notes equally.) This is known as player perspective, an example of which is "Happy Phantom" from the Tori Amos album Little Earthquakes.

However, the audience at a piano recital will have a different experience. That's because a piano will most likely be turned at a 90 degree angle perpendicular to the audience. Therefore, the audience will perceive all the notes coming from the center. This is known as known as audience perspective, an example of which is Emile Pandolfi performing "Fantasie Impromptu Op. 66" by Chopin.

But even when a real piano is being heard in a recital, it's not necessarily mono because the acoustic environment the piano is placed in will create some spacial nuance. However, when it comes to mixing and panning, the performer, engineer, and/or producer will have to consider whether any instrument will be panned in player perspective or audience perspective.

An Example of Audience Perspective

If you went to an AC/DC concert, and you had seats at the center of the venue, you'd hear Malcolm Young's guitar more in your left ear than in your right. That's because he and his amp are located on the left side of the stage. However, Angus Young's guitar would be heard more in your right ear than in your left. That's because Angus and his amp are on the right side of the stage. If you listen to any AC/DC album, the engineers and producers have always used the on-stage placement of the musicians for their corresponding placement in the mix. That allows the listener to feel like he/she is actually in the venue listening to AC/DC as they perform. For this example of audience perspective panning, let's map out a panning map of the title track from AC/DC's For Those About to Rock.

Note: You will need to be sitting in the sweet spot of your studio monitor speakers or using headphones to hear the perspective examples.) 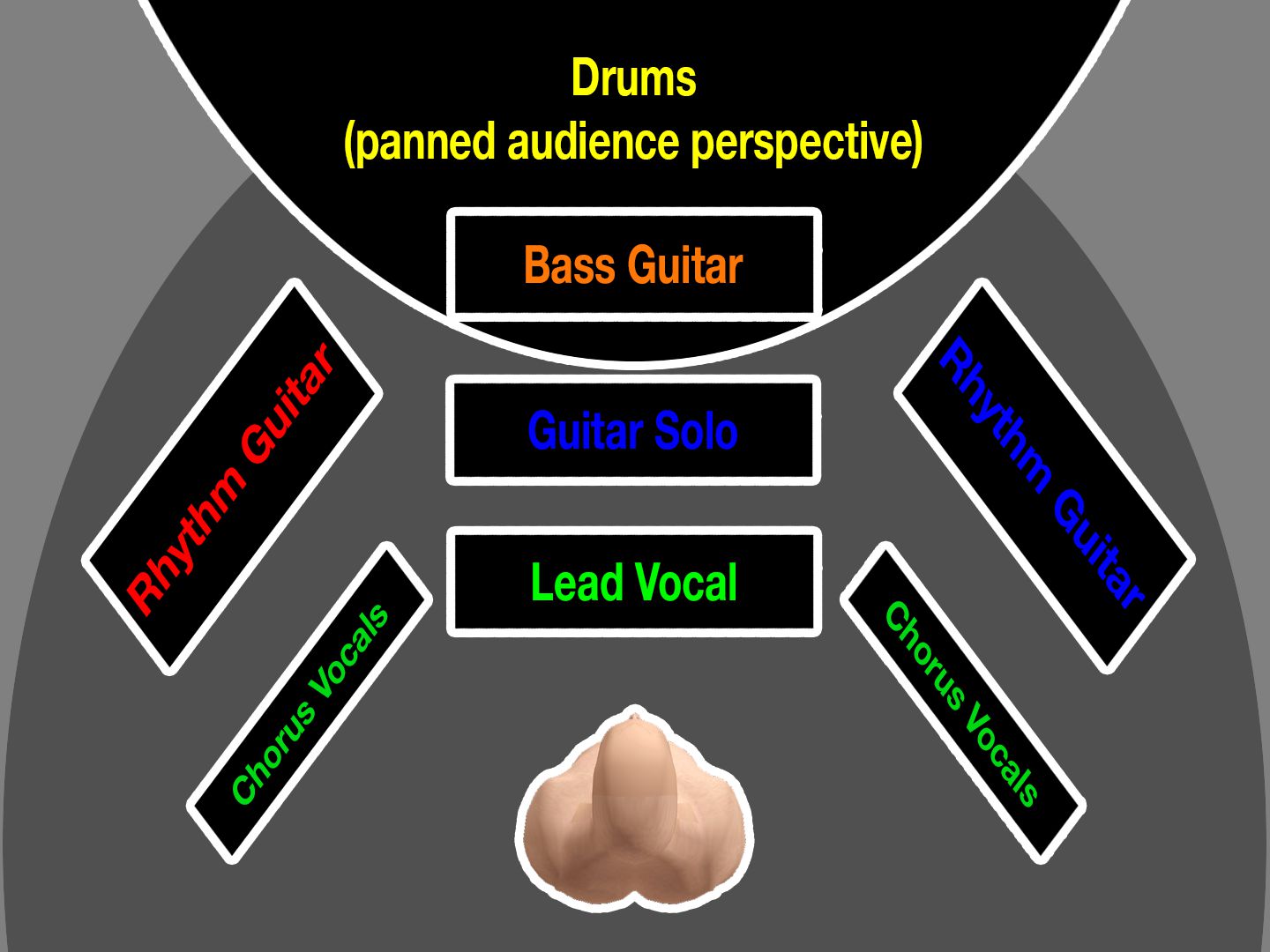 Figure 1. Panning map of For Those About to Rock.

At the very beginning of the song, the first thing we hear is Angus' rhythm guitar track, which is panned mostly right. Then Malcolm's rhythm guitar track comes in, which is panned mostly left. The drummer is right-handed, so the drum tracks are panned individually from right to left. (See Figure 2.) The bass guitar is placed in the center, as is the lead vocal and guitar solo tracks. During the choruses, you'll hear a variety of backup vocals panned on the left and right. If we were to look at those placements on a modern DAW like Cubase, it would look like this:

Figure 2. Audience perspective panning of For Those About to Rock. (Click on image above to see image larger).

Locate the pan controls at the top of the Cubase mixer, and the corresponding track names at the bottom. For the drum tracks, the kick and snare tracks are both center, the rack tom (T1) is panned to the right, the first floor tom (T2) is a little to the left, and the second floor tom (T3) is panned more to the left. The high hat (HH) is panned a bit right, the ride track is a bit left, and the overhead (OH-L and OH-R) tracks are panned hard-left and hard-right. The bass guitar track is center, Malcolm's guitar (GTR-L) is mostly left, Angus' guitar (GTR-R) is mostly right, and Angus' solo (Guitar Solo) is center. The lead vocal is center, and there are chorus vocals (BU Vox-L and BU Vox-R) panned mostly left and mostly right, respectively.

The result is a mix that closely represents the stage placement of the musicians, and therefore represents the audience perspective at a live concert.

An Example of Complementary Panning

Audience perspective is a great way to start panning. However, sometimes you get a mix that's so dense that panning the tracks to strict audience perspective will cause collisions between tracks with similar frequency ranges. For example, even if a guitar player and organ player stand on the left side of the stage, the audience perspective panning of those tracks in a mix might not allow enough separation for each instrument to be heard clearly. In that case, you'd want to pan the tracks in complementary and unobtrusive positions.

As I mentioned previously, "Dead Man's Party" by Oingo Boingo is a dense mix. Not only did the band have more personnel than AC/DC, but Danny Elfman would usually add lots of synth and percussion sequencing. Let's look at the panning map: 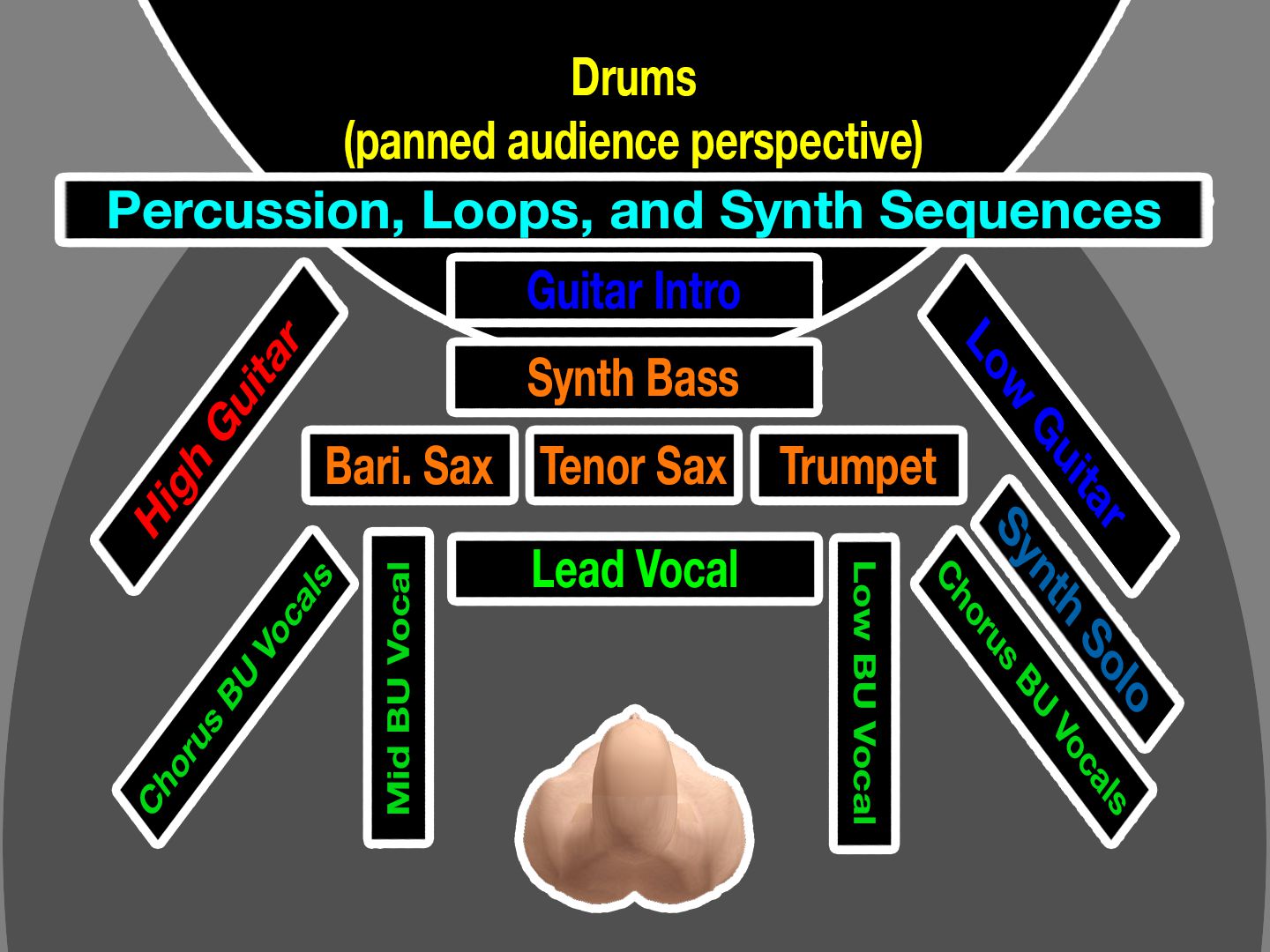 The first thing we hear (aside from the faint click track and “Yeah, let him in”,) is the guitar intro. Then the percussion and synth loop starts, which contains things like a loud tom-tom, an agogo bell (panned hard left playing quarter note offbeats), and synth drum loops. The lead vocal is single-tracked and placed in the center.

The synth bass is also center, and the drum set (some real and some sampled) is panned in audience perspective. There are two guitar tracks: one on the left, with another on the right played an octave lower. There's a mid-pitched backup vocal panned hard left, with a low-pitched backup vocal panned hard right. There are also various backup vocals through the choruses that are panned mostly left and mostly right. The horn section has the baritone sax panned a bit left, the tenor sax is in the center, and the trumpet is panned a bit right. Finally, there's a synth solo track that is panned mostly right. Now let's look at that mix on Cubase:

When you compare the panning map and the Cubase mix, you can see why thoughtful track panning is so important: With a dense mix like this, you'd have to take your time and pan the tracks thoughtfully as to create space for each instrument.

I Hope it 'Pans' Out

Even if you don't perform with a band, you can use audience perspective and complementary panning to create a spacious mix. Because of the way humans hear sound in stereo, panning is actually a more powerful mixing technique than volume. Once you have the tracks panned in the stereo field, you'll be amazed at how easily you can hear each and every note, with nothing getting lost in the mix.