Language
Certain types of compression can work wonders on most types of electric guitar parts. Armed with Universal Audio's TLA-100 plug-in, Rich Tozzoli is on a mission to make your guitar sound great.

Let's talk about using compression on guitars—specifically electric guitars. Generally speaking, compression on electrics could be used to even out any peaks, beef up the presence and get the sound a bit more 'in your face'. However, it's important to note that not every electric guitar track needs compression. If you think about heavily distorted amps, the sound is already compressed, but more in a tube-like way. Even if you're using a plug-in with distortion, the modeling of that sound was most likely based on a compressed saturated set of tubes.

But for the most part, certain types of compression can work on almost any electric guitar part. I've found this especially true using Universal Audio's Softube Summit Audio TLA-100 plug-in. The reason this particular plug-in works so well compressing electric guitars is because it can do it subtly, yet retain the classic characteristic of what good compression can do.

Heres a brief overview of the highlights of the TLA-100. 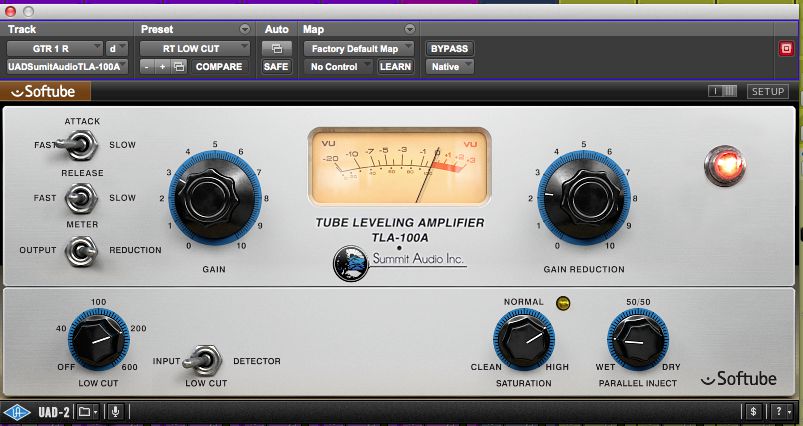 It's based upon the classic hardware version from the '80s which combined tubes and solid state.

The meter switch selects either output or reduction. Reduction lets you view the amount of reduction on the VU meter, and output lets you see your output signal.

The design is laid out exactly as the hardware, but there's an extra panel of features on the bottom that add additional functionality, which is why I feel it works so well on electric guitars.

Where I begin is by setting the Attack and Release both to Fast, so the compressor lets almost all of the transients through and returns to 'normal' quickly when it does begin to do its thing. I prefer to view Reduction, so I can see what's happening when I turn the Gain Reduction knob. Since the compressor works almost automatically since it's program dependant, I just dial in the Gain Reduction until the needle moves just a bit on the loudest parts of the track. Then I will add a touch of gain with the Gain knob, because I find the sound of this unit to be warm and thick. At this point, the level adjustments of the channel I'm working on is a balance created between the Gain knob and the actual fader on the channel itself.

But that's just the first step. The additional features that were added to the plug-in version, Low Cut, Low Cut Selector, Saturation and Parallel Inject, make this a great tool for electric guitar compression.

Remember, if we're turning up the signal and adding some warm sounding compression, we will be pushing all the frequencies of that particular channel up, from lows and mids to highs. But with electric guitars, you don't often need a lot of those bottom frequencies. They can get in the way of the bass and kick, and cloud up the low end of the mix. So I set the Low Cut filter to Input, and begin to turn up the Low Cut knob. I prefer to first solo the track so I hear the low end being cut out. Then I will put it into the mix and make my final adjustment. When you use this low cut knob across multiple microphones or amp simulators, the guitars will no longer fight the low end of the mix. It's a cumulative thing—the more low end you take out across all the guitars, the more room other instruments have in the big picture.

With the Saturation knob, I tend to start on Clean and push it up from there. It's a very particular type of distortion it adds, almost like overdriving a console input. But it can be very cool in certain instances, and helps add a bit of grit to the signal—especially when pushed above the Normal setting.

Lastly, I will experiment with the Parallel Injection knob but starting on fully Wet, where you're hearing 100 percent of the compression settings that you've just dialed in. As you turn it towards 50/50 and on to Dry, less of the affected plug-in sound will be combined into the signal. It's a personal taste issue at that point, but you can do things like push the Gain Reduction and Saturation really hard, yet introduce just a bit of the sound into the overall signal by setting it somewhere between Dry and 50/50.

No matter what you choose to do, Ive found the TLA-100A can help just about any electric guitar track I place it on. From subtle to aggressive, it gets the job done.

Guitars are double tracked with 2 mics on each pass. The single guitar audio examples are of one microphone. The other are off all four mics in the double track. Then there is the full example of the entire cue.