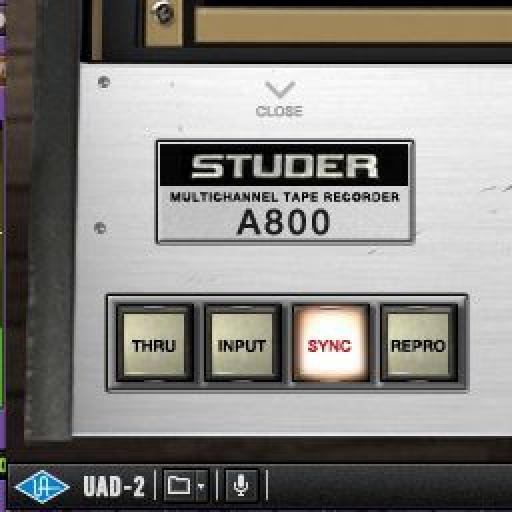 What terms come to mind when you think about the sound of analog tape? Warmth, punch, low-end beef, controlled distortion? Yes, all of those work. But that only happens if you have a perfectly aligned, maintained machine – not an easy task in this day and age. So how about adding an analog tape plug in to your tracks instead – specifically on drum overheads? Let's take a look at how the use of Universal Audio's Studer A800 Multichannel Tape Recorder can help your mix.

In my productions, I like to compress the drum overheads to get them to really rock. Sometimes, I will 'hit' them quite hard – meaning there is a lot of compression happening. Since compression also tends to mean gain reduction, I will fix that with Makeup Gain – something most every compressor features.

But what also happens in that case is the compression 'grabs' the cymbals and makes them overly bright and loud. Remember, the overhead mics tend to be very close to the cymbals – hence they get put through the compression processing more than anything else.

To combat this, you can of course try an EQ, and experiment with removing some of the highs (either pre compressor or post). But what I have found to work even better is to place a tape simulation plug in such as the Studer A800 after the compressor and make a few tweaks.

One of the first things I will do is turn the Input up a little bit above 0. This sets the level going into the 'tape machine' circuitry. You can even get a little crunch happening by turning that up quite a bit. But in the case of overheads, I tend to want just a bit of processing.

Next, I'll set the IPS (Inches Per Second) to 7.5 and it creates a dark, warm sonic characteristic. If you want a little less tape/head color, try 15 IPS. From there, I will set the Output to whatever level is needed in the mix (Output has no effect on the internal tape processing).  I tend not to worry as much about the Tape Type or Cal (Calibration), as they only make a small difference in the sound. 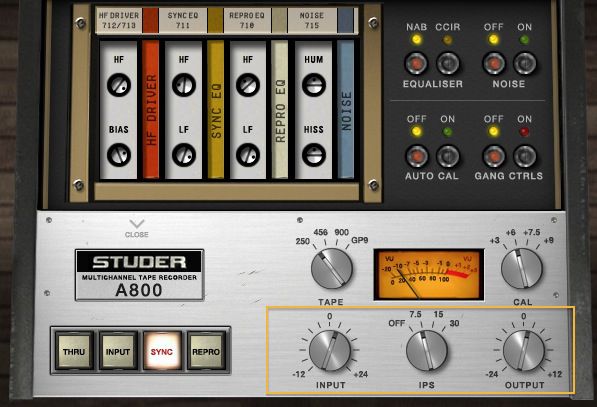 Setting the Input, IPS and Output.

By clicking on the Studer Badge, a set of secondary controls open up. Selecting Sync on the Path Select Buttons will model the sound of recording and playback with the sync/record head. It will also let us use the HF (High Frequency) and LF (Low Frequency) Sync EQ settings. These EQ controls are used for tape playback calibration, but we will use them to darken the cymbals in the overhead compression. 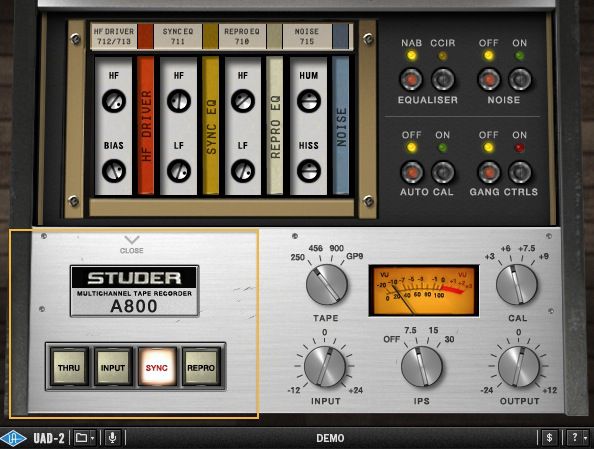 Click on the Studer badge to reveal the Sync controls.

By turning the HF Sync EQ counterclockwise, it will begin to pull the crispy highs out of the cymbals. This control is set to taste, as each instance of recording will of course be slightly different. Often I will also turn the LF up (clockwise) and pump up a bit of the low end in these overheads.

The combination of the Sync Path Select, with a touch of drive from the Input, along with a 7.5 IPS tape speed and some HF and LF Sync EQ can tame those harsh cymbals, deliver warmth to the overall sound and let the compression really pump those drum overheads. Try it out!

Discover more about how to get an analog sound when mixing digital in Rich Tozzoli's Mix Digital, Sound Analog!