Language
Before you reach for your EQ and compression plugins to shape the sound of your snare drum consider adjusting the character by using multiple microphones and mixing those. It's a powerful way.

When it comes time to shape our drum sounds—especially the Snare—most of us turn to EQ & compression to dial up the tone and character we want from a particular recording or drum sample. But when you have the luxury of working with a fully multi-miked recording or sample kit, with multiple tracks of snare (and sometimes kick as well), a lot of sound-shaping can be accomplished simply by blending the different qualities of those individual mics, even before turning to processing.

The Snare drum, top to bottom, over & under

Many recordings and sampled drum kits capture the Snare from three different vantage points. A close mic is positioned above the drum, typically a few inches away, to capture the impact and body of the drum. Often, another relatively close mic is set up below the Snare (with its polarity reversed), to catch the bright buzzy contribution of the rattling snares themselves. And, of course, the overhead mic(s), while picking up the entire kit along with the cymbals, include the Snare, from a slightly more distant perspective (a few feet), for a slightly “room-y” tone, with more air. Mixing these mics in different combinations can provide a wider variety of Snare sounds than people might expect, if they’re not afraid to experiment with balances that go beyond the most traditional blends.

Probably the most traditional way to approach getting a modern Snare sound with a multi-miked kit is to use the Top mic—the close mic a few inches from the batter head of the snare—as the primary component of the Snare sound. 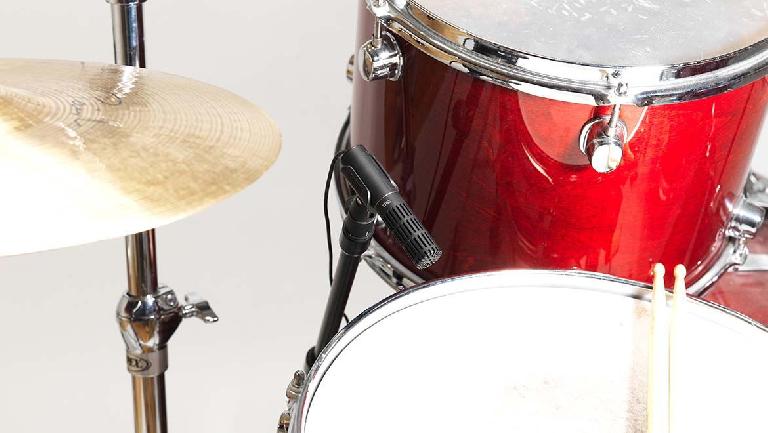 This mic, thanks to its proximity to the drum itself, and to the spot where the stick makes contact, tends to offer the thickest, meatiest sound. The body of the drum dominates, for a nice, fat tone that provides for a solid backbeat. But on its own, the Top mic will usually sound a bit too thick and midrangy, lacking air and brightness. So the other mics are blended in smaller quantities to add these qualities. The Overhead mics bring in a thinner Snare sound, but one with more ambience, providing the air. And the Bottom mic—though it can sound quite thin and rattly on its own—can be dialed up subtly to bring in a suitable amount of the bright buzz of the snares, to taste.

But another approach to getting a drum sound might use the Overheads as the primary mics, harking back to earlier, classic drum miking techniques that utilized fewer mics, and depended on a more distant mic/pair for a tonality that sounds more like a natural kit in the room does—a punchy , more midrangy quality, with less of the deep low-end of more modern drum tones, but a nice roomy ambience that’s perfect for many musical styles, especially when it complements an ensemble of primarily acoustic instruments. Here, since the Overheads will supply the primary drum sound, for a good stereo image, their positioning is key. For a well-balanced Snare which is appropriately centered in the middle of the soundfield, instead of simply placing the Overhead mics at the left & right edges of the kit, you might need to arrange them to ensure that the Snare is positioned more evenly between them. If you’re going for more of that natural overhead drum sound, you may not be blending in enough of the close Snare mics to pull the snare towards the center, or be able to use panning to center the Snare (& kick) without skewing the rest of the kit to one side, so the imaging from the Overheads themselves has to be mostly there. Often this may require a placement where one of the Overhead mics is a little further off-side, or a little more forward, than the other. If the imaging of the kit—and in particular the Snare—is nicely balanced, then you have greater flexibility as to how much of the close mics you choose to blend in. The Top mic can be gently dialed up to add some body & thickness, and, if needed, even the Bottom mic can be utilized lightly to add to whatever snare buzz the Overheads have already captured. Many engineers use this Overhead-dominant approach to get their Snare/drum sounds, rather than focusing on the tighter quality of the close mics as the primaries.

The thin, buzzy sound coming out of a mic placed below the Snare is not usually the sound most people are after for a traditional pop drumkit/Snare sound, which is why it’s usually relegated to adding just a little spice—a subtle bit of brightness or presence, or maybe a little rattle to animate a Snare that’s all tight “pop”. But sometimes, even this loose, rattly tone can make for an interesting Snare sound, like when a lighter Snare would be appropriate—maybe an arrangement where the standard hard snare “crack” is a little too much, but the softer thwack of a brush-played snare is a bit too understated. While the Bottom Snare mic alone will probably be too thin/buzzy/ringy by its lonesome, a little of the Top mic added in can provide some missing bottom end/lower midrange thump, with the Overheads still contributing the air and upper mids. For this kind of a more specialty Snare sound, the roles of the Top & Bottom mics may be kind of reversed—the Bottom mic mixed in at a level that would normally be set for the Top mic, with the Top mic taking on the Bottom mic’s usual role, mixing in just a little of whatever’s missing from the primary mic. It can become second nature to immediately go to a familiar approach for blending multiple Snare mics, but it can also be worth a little time to experiment with more unusual blends (and I haven’t even touched on the use of additional distant room mics!). And though I’ve been describing some of the different possible sounds available from simply varying the relative levels of the Snare mics, EQ, compression, and other processing will still probably be applied—it may be considerably different processing if you’re going for a less traditional Snare sound, but it opens up even more possibilities. For example, band-limiting one of more of the close mics, can further accentuate the specific peaky or focused tonality of that signal, but still not sound too “processed” when all the mics are heard in combination. And effects can be applied to one mic, to further distinguish its contribution—a little light phasing or flanging could soften and thicken the short, hard “pop” of an overly dead Top mic. Or a little light, short repeat echo on a Bottom mic could extend its bright buzz for a little welcome extra “fizz”. You could also use Automation to subtly vary the balance among Snare mics in different parts of the song, for a little variety—maybe pull up a Bottom mic on verses, for a slightly softer sound, and then pump the Top mic for more of its short, hard “pop” on the backbeat in choruses. This could be particularly useful with a multi-miked Snare sample that doesn’t have as much tonal variation as a live-played part might.

So it could be worth a few minutes at the start of the mix to just play around with the mic levels and balance, and see what some less-familiar variations on your usual go-to Snare sound may have to offer.

Learn more recording and production techniques in the AskAudio Academy.