Expert producer Joe Albano shares his years of experience mixing live multitrack recordings. Here's what he has learned about the best way to approach every kind of sound source.

Mixing a multitrack recording made of a live performance can present a number of additional challenges requiring a little extra attention over and above the usual mixing concerns. Here, in no particular order, are a few potential problems worth considering when approaching a “live in concert” recording.

Naturally, miking up instruments on stage means close-miking to avoid excessive leakage which can rob the mixer of control later on. Of course, close-miking is typically employed in studio recordings as well, so this is not a problem in and of itself. But some sources—for example acoustic guitars, and vocals in particular—would normally be miked up at a greater distance in the studio, to preserve a more open, natural sound. On stage however, it’s unlikely you’ll find a vocalist singing into a large-diaphragm condenser from around a foot away—at least not in most live ensembles with drums and electric instruments. To keep the vocals better isolated and to avoid issues with feedback during the show, it’s much more typical to see a vocalist’s mouth right up against a hand-held dynamic Shure SM58 or something similar. At the show this is fine since the 58 is fine live vocal mic, but when it comes time to mix the tracks later on, a vocal captured this way may require a little more work.

A vocal track recorded up close with a dynamic mic will typically have a number of differences in sound quality from a more standard studio/condenser recording. The printed frequency response of the 58 may appear similar to that of, say, a Neumann U87, the classic workhorse studio vocal mic—they both have an upper-midrange peak. But in practice the combination of the different designs—condenser vs dynamic—and the difference in distance—around a foot vs an inch or so—creates distinctly different tone.

The 87’s presence peak is higher in frequency, and provides more “air” than the 58’s, which adds more aggressive midrange character. That midrange helps the vocal cut through a loud live mix, but it may be a bit too “honky” and somewhat nasal when heard in the more controlled listening environments a mix is likely to be played back in. Couple that with the inevitable presence boost, or proximity effect from the close placement, and you’ve got a thicker, punchier sound lacking in openness. 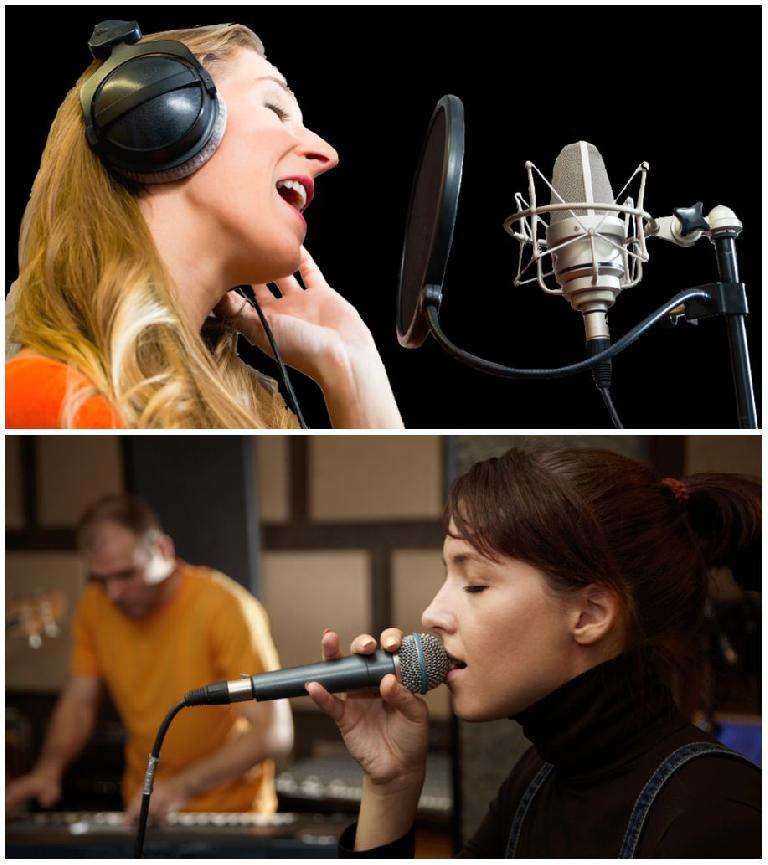 Of course, you can’t really compensate for a dynamic mic, even a really good one, lacking the more open quality of a good condenser but against the track you can EQ the live vocal for a more well-balanced tone. This will likely involve an appropriate cut in the bass, either a broad dip or a shelf from 200/250 Hz on down, to remove any tubbiness from the proximity effect. And if the midrange is too nasal it may help to counter the live mic’s presence boost with a little dip, and instead dial up a gentler, more shallow presence boost around 5-10kHz or so, for a bit of air. If you happen to have a recording of the same singer made in a studio setting, that could be a helpful reference to get your ear accustomed to what that performer sounds like with more optimal miking.

Another occasional problem with live recordings arises from the use of DI inputs for instruments that would normally be miked up, particularly acoustic guitar. An acoustic guitar and other similar stringed instruments may be too soft to be successfully miked up in a loud ensemble without the mic picking up too much of other instruments. So it’s common for the acoustic guitar to be taken via its onboard piezo or magnetic pickup. This eliminates any level/leakage problems live, and provides a good strong signal to the PA, but the tone is inevitably compromised. Both the overly-bright thin piezo tone and the often-muffled tone of magnetic soundhole pickups are familiar, and both lack the richness and air of a properly-miked acoustic guitar.

Now, some guitars feature much better, more sophisticated pickup systems, sometimes including internal or close-mounted mics, or onboard electronics that provide the necessary tonal compensation. But even with more common (affordable) pickups, a little TLC in the mix can do wonders. EQ can help, though it’ll be markedly different for piezo vs magnetic pickup recordings. To tame the typical piezo sound, a targeted cut around 4kHz can help tame the typical piezo “quack”—dynamic EQ or sidechained compression, if available, can be even more effective. For magnetic pickups, a broad deep midrange cut combined with a high-end boost is called for—start cutting at around 1k, and find the best midrange frequency by ear. 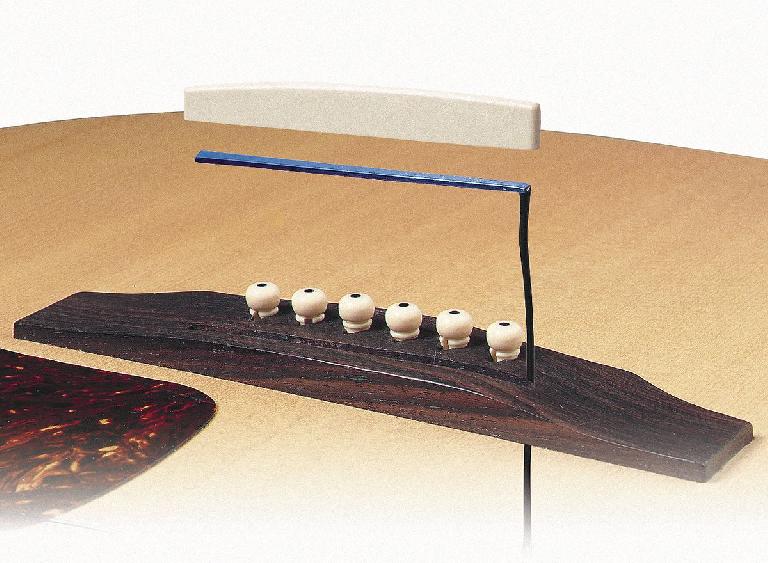 An acoustic guitar’s onboard (piezo) pickup assembly for DI

If the acoustic guitarist also sings, the vocal mic may pick up some of the guitar as well. If that’s the case, that sound blending in with the DI signal might help to add a little depth, even if on its own it’s a pretty lo-fi tone. Otherwise it could be helpful to add a little small-space resonance to compensate for the lack of body resonance from the piezo/magnetic pickup. I’ve had decent luck employing a convolution reverb with an IR of guitar body resonance, mixed in lightly to add some much-needed body to an otherwise thin DI acoustic guitar. There are even a few dedicated plug-ins for this, though some require a particular platform.

A DI’d acoustic guitar w/magnetic pickup: the DI signal as recorded; then EQ’d and processed with a convolution reverb (to add body resonance) for the mix

If an acoustic bass was used, it may have been recorded on two tracks—a mic and a DI’d onboard pickup. The best results will usually be had by blending the two in the mix—take midrange punch from the DI and low and high end (body and string noise) from the mic. With just the right blend, you can get an excellent bass tone, even though both tracks sound less than ideal when soloed.

On stage, most drums are often close-miked, but since cymbals usually carry acoustically, unless it’s a larger room they’re often not miked up at all. If there are no drum overheads with sufficient cymbal sound, and the cymbals seem to be lacking in the drum mix, you may be able to get more cymbals from nearby tom mics—you could try duplicating the tom track(s), filtering out everything below around 1k or so, and adding a little treble boost to what’s left, to try and extract a little more cymbal sound. Keep in mind that there’ll still probably be plenty of cymbal leakage in at least some of the other instrument mics, so as you’re crafting the drum sound be sure to check it with the full mix and not just soloed, and make appropriate adjustments that take cymbal leakage into account.

As far as close-miked drum tracks go, the same EQ choices you’d make for a studio recording could work here too, but if the snare is only miked from the top, and there are no dedicated drum overheads, it may be lacking in sizzle, and need a bit more drastic midrange cut and a treble boost around 3k-8k to bring out what little snare buzz is there. And once again, be sure to factor in snare leakage. If you realize you’re depending on that leakage for your snare sound, make sure not to gate those tracks, which would likely result in inconsistent snare tone.

Nowadays, most keyboard instruments are electronic, sampled pianos and organs and the like and their DI signals are as good as it gets, but if a live keyboard sound turns out to be weak or thin or otherwise stands out negatively in the mix, there may be some options. Even if there’s only an audio recording (no MIDI), it may be possible to convert that audio to MIDI and use it to trigger a better-sounding plug-in as a replacement, or just to layer it with the original for extra fullness. If the keyboard part is polyphonic the options are far more limited—basically only Melodyne Studio’s DNA feature can extract a polyphonic MIDI part from an audio recording, but it does work quite well as long as there’s only one instrument at a time in the recording. 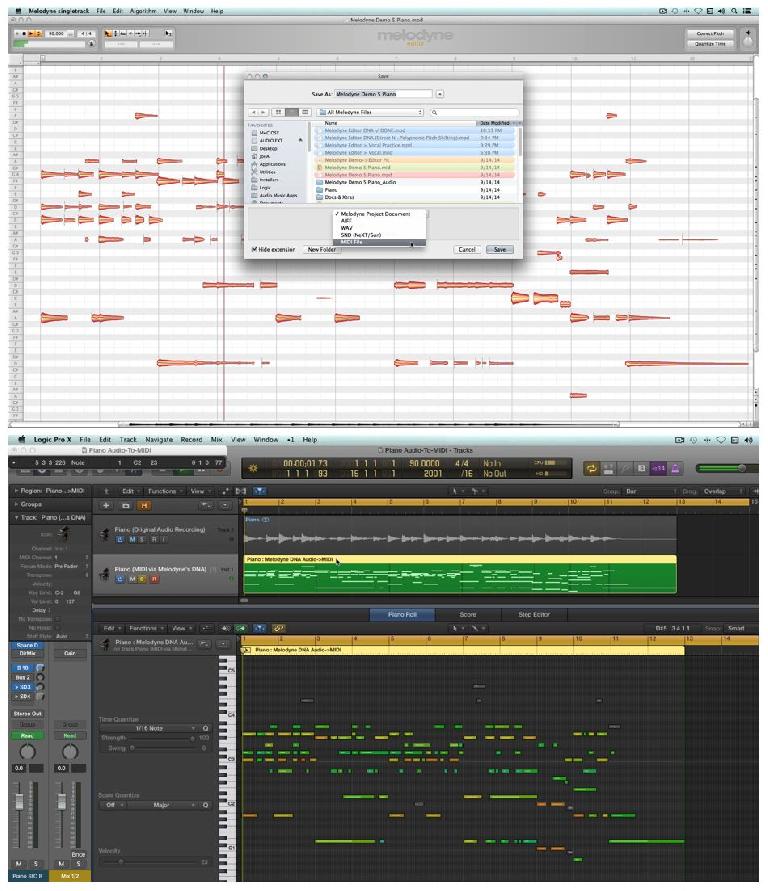 Finally, the biggest challenge for mixers not used to dealing with live recordings may be a much greater degree of leakage than they’re used to with better-isolated or overdubbed studio tracks, especially with recordings made on smaller stages where the musicians are practically on top of one another. While guitar amp mics, close-miked drums and DI’d tracks may be quite clean, most other tracks will include significant leakage. Vocals will have snare and cymbals, individual brass mics will pick up adjacent horns, and acoustic piano mics may pick up everything to some degree, with a distinctly resonant tonal quality.

In most cases, I’d suggest that unless the leakage is truly intolerable on a particular track, it’s not worth it to try to gate it out. It’s part of the sound of the performance, and it’s not necessarily a bad thing, though it can make mixing more of a challenge. As long as it’s not too prominent, the leakage can add a pleasant depth and three-dimensionality to the mix. Gating it in and out can result in subtle but noticeable changes in that quality, and I’d suggest that it’s better for that aspect of the mix to be consistent.

For truly critical leakage problems—like unwanted sounds that are not part of the musical performance—you could try some of the high-end audio repair tools that employ spectral processing to dig into an audio file and remove unwanted artifacts, but nine times out of ten, if the live engineer knew their stuff, you should be able to utilize what leakage there is without it getting in the way too much.

The more live recordings you mix, the more you’ll develop techniques for dealing with the specific problems they present. And remember, a live recording doesn’t have to sound as dry or tight as a studio mix. That live quality—from both looser, more energetic performances and the extra depth from leakage and room tone—is part of the appeal, so you might as well embrace it and use it to good advantage.

Take your music and audio production skills to the next level with the professional courses in the AskAudio Academy: https://ask.audio/academy?nleloc=new-releases