Mixing In Logic Pro X: Why Presets & Patches Are Not Necessarily Your Friends

Language
Can you imagine a DAW or a virtual synth without patches or presets? Strange question... but, in this article Jay Asher argues against Logic Pro X's Library when it comes to mixing.

Logic Pro X comes with a ton of Library patches for software instruments and audio channel strips, designed to help the user create a great sounding project. If you create an empty software instrument track and load in a patch from the Library and play it, chances are it will sound really good because it not only will load the Logic software instrument, it will load perhaps a compressor and an EQ, and maybe a half dozen other plug-ins. It may also create sends to auxes where the auxes already have FX like reverbs and delays instantiated on those auxes. If you record a vocal and you load a patch, it will do the same except without a software instrument, just plug-ins designed to help you achieve a “warm” or “vintage” or “slammed” sound. The Logic developers are very talented. No wonder they sound good.

Here in Pic 1 is the Mixer view on one of the demo songs that came with Logic Pro 9 that I brought into Logic Pro X. Lots of plug-ins, hopefully chosen by the creators but I suspect that a lot of them were chosen just by loading patches of channel strip settings. 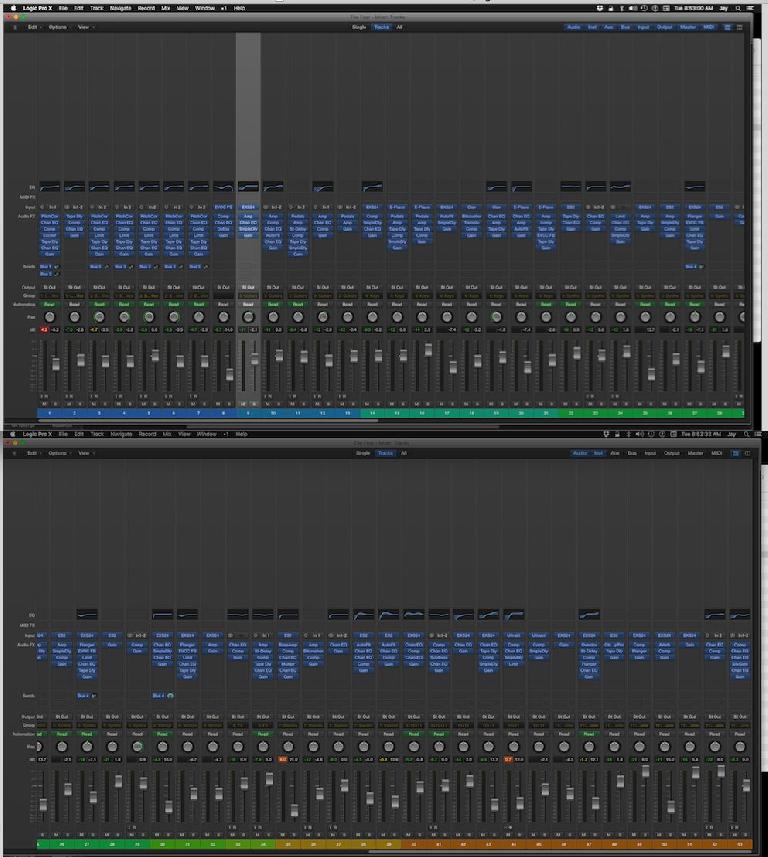 This should make achieving a great mix in Logic Pro X a breeze, right? Actually, in my opinion it does precisely the opposite.

What is Mixing Rreally About?

"Mixing should carefully balance two goals: blending all the elements into a cohesive whole, and at the same time keeping them sufficiently defined so that listeners can distinguish among them." (David Nahmani, Logic Pro X 10.1 Apple Training Series Book)

Exactly. It isn’t about making each one sound great, which all those plug-ins do, but making them all work together. Making the acoustic guitar sound more jangly and less rich while making the electric bass sound less round and warm may not make each sound great when soloed, but they probably will blend together better.

Good cooks understand this principle. How much oregano in this dish, how much salt, how much pepper? It depends on how they taste when you add them. You can’t just throw a bunch of spices and ingredients in willy-nilly and expect a tasty dish. You have to add some, taste, and then decide which to add, or not add, next. Similarly, you cannot add a ton of plug-ins in preset patches and expect them all to work together.

What Can I Do About This After I Have Already Loaded Them?

In Pic 2, here is a patch featuring the Vintage Electric Piano software instrument. You can hear what it sounds like with all the plug-ins in Audio Example 1. 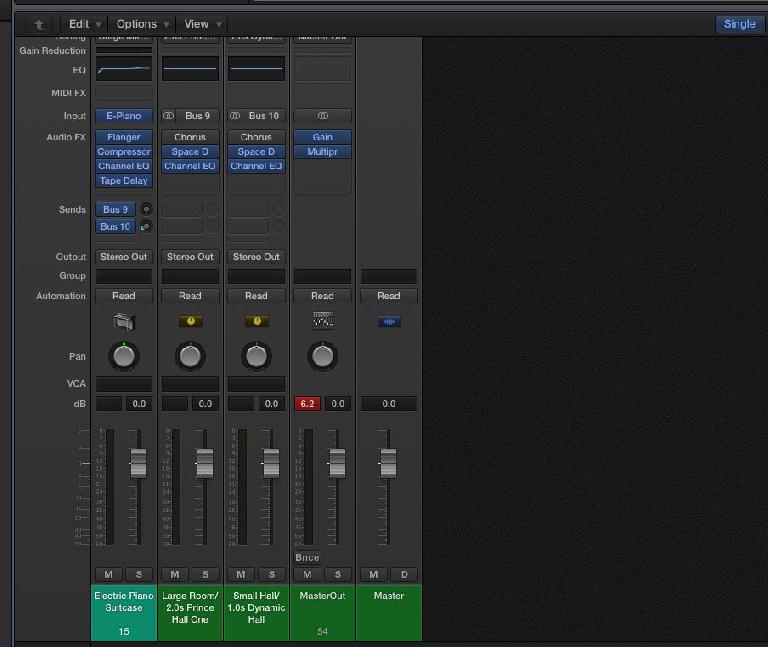 Am I really going to want all those plug-ins when I mix? What does it sound like without them? All I need to do is drag the mouse down on each channel strip, except the actual Vintage Piano software instrument to turn them off. See Pic 3 and listen to Audio Example 2 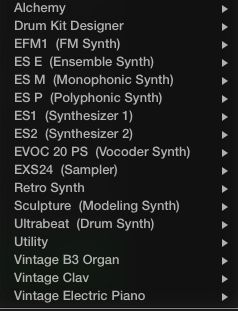 Quite a difference, eh? Now I can turn them on one by one and listen to them in the context of my mix and decide what makes it achieve the dual goals of having its own place in the mix but working with the whole. On a mix with over 50 tracks this can make a huge difference.

An Anecdote That Illustrates This Point

I have a friend who is a terrific audio engineer who has worked with lots of famous artists. Mostly he mixes in Pro Tools, but he has several Logic Pro X based clients who prefer him to mix for them in Logic Pro X.

He related to me the following, and I paraphrase:

“ I went to a client’s studio recently to help him with a mix that he was having trouble with. It had tons of plug-ins added to the tracks loaded from patches in the Library. I hit play, and it sounded just dreadful. I asked him to leave me alone for 10 minutes and then return. I turned off all the plug-ins and hit play. He said to me, “Wow, that sounds better already. What did you do?”

Can I Create the Tracks Without All the Plug-Ins?

Sure. On an empty software channel strip track, hold the mouse down on the “Instrument” rectangle and simply select the instrument. Then in the instrument you can choose a setting and you will have the sound without all the FX plug-ins. See Pic 3.

Why Does Apple Create These Library Patches Then? Are You Smarter Than They Are?

Of course, I am not smarter than they are, and of course they have good reasons for doing this. The majority of new Logic Pro X users are not people experienced in the mixing process, nor do they aspire to doing their own professional quality mixes, at least in the beginning. Most are GarageBand updaters and newbies to all this. If they load a patch and it sounds great it gets them excited and encouraged to continue. Also, they can look at the combination of plug-ins and open each one, check out the settings and see what the developers think helps them achieve a specific sound, and then experiment with them and eventually save their own patches. In short, the Library patches can be a tremendously valuable learning tool.

Mixing is a craft that requires lots of time listening, practicing and learning. Bear in mind, that this is not life or death. Nobody dies from hearing a bad mix and you will probably have to do many bad mixes before you do some good ones. Lord knows, I did

Sometimes less is more. EQ, for example, is a tool than can do as much harm as good when not used thoughtfully. That same is true for compression, reverb, delays, and all the rest. The Library patches can be a good beginning but then you have to prepare yourself to turn some of the FX off and make your own educated choices as to which will serve your mix in achieving your two goals: parts that are clearly defined and yet work cohesively as a whole.

Learn Logic from the Pros HERE.