Joe Albano shares his years of mixing and production experience for beginner and intermediate level producers in this enlightening tutorial on the frequency ranges needed for EQ adjustments.

EQ is, of course, one of the most-used processors in the studio. For those just getting started with the art of mixing, turning to EQ can feel like a writer staring with a blank page—there are so many options, but it’s often not clear what settings to make to accomplish what our ears are telling us needs to be done.

Aside from the obvious—adjusting treble to affect brightness, adjusting bass to tweak the low end—deciding which frequencies to turn to and how much boost or cut to apply to deal with various tonal issues can often become an exercise in trial-and-error.

Now, of course, that can be a good way to learn—to train your ears to recognize the tonal character of different frequency ranges, a skill that experienced recordists and mixers spend years building up. But even while making adjustments by ear, it can help to have some idea of approximately where to start to address typical tonal issues on different tracks in a mix, and in the mix as a whole. In this article we'll explore the typical frequency ranges that mixers turn to when dealing with some common EQ adjustments—I’ll assume familiarity with the basic layout and controls of a standard parametric EQ.

It can be useful to divide up the overall audible frequency range of 20Hz–20kHz into several frequency ranges, as a broad reference when addressing specific instruments or a full mix. 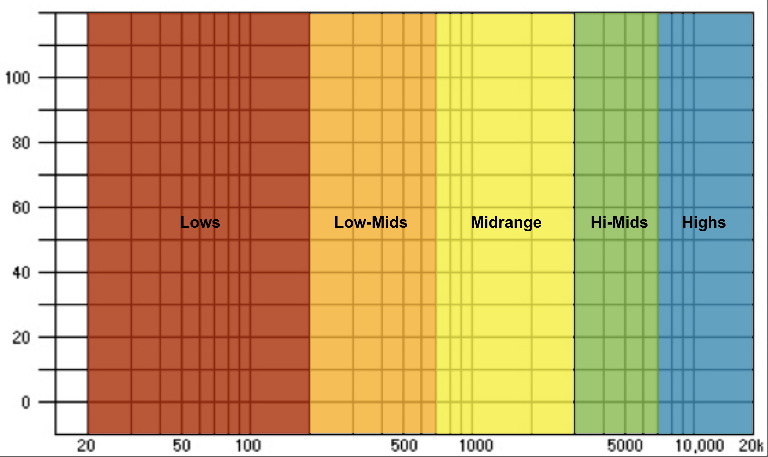 As you can see in the Frequency response graph above, I’ve broken the overall 20-20k range into five broad frequency ranges: lows, low-mids, mids, high-mids, and highs. Of course, within those ranges tweaking different frequencies will have different tonal effects, but it’s a useful place to start. Here’s an audio example of the general tonality associated with each range.

The low frequency (bass) range up to around 200Hz or so contains the fundamentals (lowest frequencies) of instruments like kick drum and bass—this range usually affects the tonal quality that’s typically described as “thump” or “boom”, in studio jargon.

The lower-midrange (Low-Mids) includes everything from upper bass—“punch”—to the frequencies that often account for a “boxy” quality, something usually avoided in a modern mix.

The area I labelled just “Midrange” is the center couple of octaves of the audible range. This range is often attenuated (reduced in level) to prevent too much overlap of harmonics and overtones in a mix, which can negatively impact overall clarity.

The upper-midrange (Hi-Mids) is typically referred to as the “presence” range—with most instruments and voices the overtones here can bring the part forward in the mix, which is described as adding presence. Accentuated frequencies in this range can help pull up a part in the mix, but too much can be harsh and peaky.

The highest frequency range (treble) is sometimes referred to as “air”. Most of what falls into this range is the upper overtones of bright instruments like cymbals and acoustic guitar, and some subtle ambience—a little boost up here can sometimes add a bit of openness, a.k.a. “air”.

But, while a mixer may occasionally make very subtle adjustments to the overall mix, most EQing is done on specific tracks—instruments and vocals. So let’s look at a few common applications for EQing individual acoustic instrument and vocal tracks.

Different instruments are often said to be able to “take” different amounts of EQ. What that means is that some tracks can’t have too much EQ boost or cut applied before they start to sound “canned”—artificial and overly-processed. An EQ band or two with gain of around 2-3 dB is usually sufficient to address most tonal situations—either corrective or creative—and around 4-6 dB should be more than enough to address even more egregious tonal imbalances.

Drums are often an exception—it’s common to apply more EQ, sometimes with greater amounts of boost and cut, to individual drums. The sound of the drums in a modern recording is very different from the natural sound of an acoustic drumkit in a room–listen to older jazz recordings or pop recordings through the late 60’s before multitrack recording became the norm. Once drums started to be miked up individually, EQ was—is—much more aggressively used, for two reasons—to compensate for an overly midrangy tone from the close mic positioning; and to create the larger-than-life drum sounds that we’re all used to from just about every genre of pop music.

Overall, modern drum tone involves scooping out (cutting) the mids to some degree, and/or emphasizing the high or presence range, and the low end. The kick often gets a boost somewhere between 50-60Hz or 100-150Hz. A 50-60Hz boost will add tight solidity and thump, while a 100-150Hz boost can add boom. Since relying on the lowest frequencies is a problem if the recording is played on smaller speakers with poor bass response, it’s common to also boost around 2-4kHz, to bring out the slap of the beater, insuring that the musical part will still be heard even in bass-shy playback environments. For those who prefer to cut rather than boost—a practice many mixers try to adhere to—a broad dip in the mids/low-mids will have a similar effect—lowering that range leaves more energy in the bass and presence ranges, and can sometimes sound more natural and less “EQ’d”.

For a snare miked up with a close mic on top, a midrange cut somewhere in the 300/400Hz-1kHz range can counter the boxy quality that’s emphasized by close-miking. (To most mixers, “boxy” describes an overly midrangy tone that sounds like what you’d hear if you speak into a cardboard box, which would accentuate the midrange overtones). To give a snare a fatter sound, a boost around 150-200Hz can often help. Many mixers also like to add a little lower presence in the neighborhood of 3kHz—typically this will emphasize the brightness of the snares on the bottom of the drum, but it can also add a crisp edge to the snare, often making it more prominent in the mix. Just be careful not to overdo this boost—in fact, when you’re just looking to emphasize the contribution of the snares, if there’s an extra mic on the bottom of the snare drum simply bringing its level up might be a better, more subtle way to add that snare brightness. 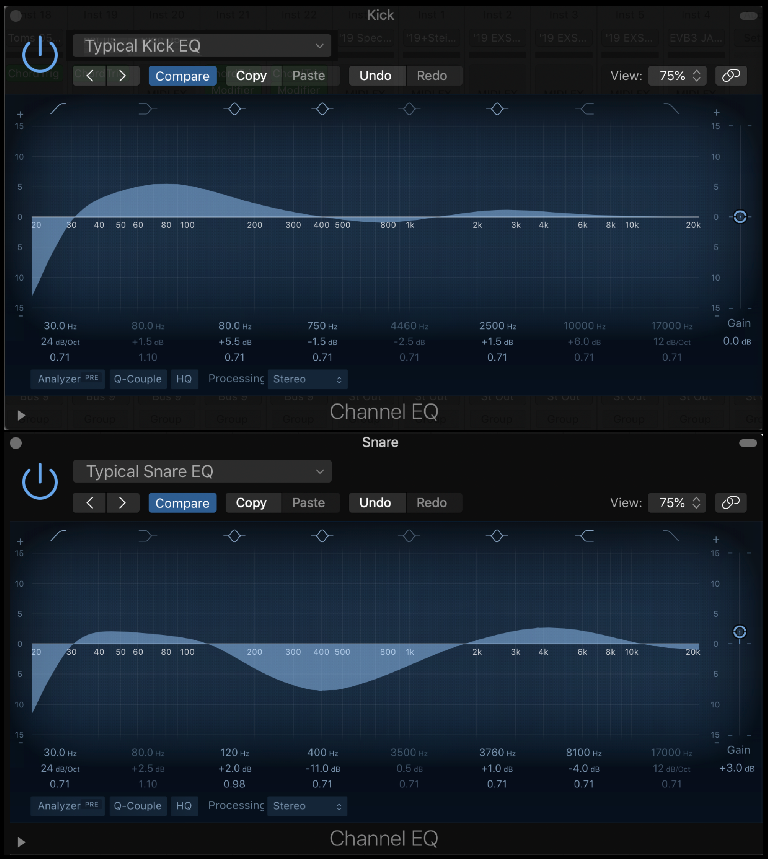 Electric bass is often EQ’d in conjunction with the kick, so they don’t fight each other in the critical low-frequency range, muddying up the mix. So if a kick has some extra thump or boom dialed up (50-100Hz), a boost of a few dB in the 200Hz lower-mid/upper-bass range (an octave or so higher) might be applied to the bass. This will impart a quality that many mixers describe as “punch”. Conversely, if the kick has a punchier or slappier tone, then the low end of the mix might be filled out by emphasizing the bass’s lower range, down at around 80-160Hz or so.

Acoustic guitars often are used to fill up space in a mix—doubled, wide-panned strumming acoustic guitar tracks often fill up the background of a musical arrangement, providing not only rhythm but also filling in the tonal spectrum. To make sure the constant presence of the guitars’ midrange frequencies doesn’t mask—step on—other instruments, mixers often add significant EQ.

Even when miked up with the usual bright pencil condenser mics, acoustic guitar tracks can have a lot of midrange energy, and in some cases a fair bit of low end. This can easily cover up those ranges in other instruments, so often a broad cut below 200Hz or so is applied to steady strumming parts—sometimes this broad dip may even start at a higher, midrange frequency. This can leave a very thin, percussive acoustic guitar tone, dominated by pick noise, almost turning the guitar into a percussion instrument, without much of its characteristic resonance. But while this may not sound great in isolation, it can work well in the overall mix, keeping the guitars clearly audible without their wash of midrange and low end getting in the way of important musical detail in other tracks.

Of course, if those EQ’d guitar parts are soloed at some point, less drastic EQ might be needed at those moments, achieved via automation or separating the parts onto differently-EQ’d tracks for more isolated sections of the song. And when acoustic guitars are used more as a featured instrument, this kind of drastic EQ is not necessary—leaving the lower mids and low end alone will preserve the natural fullness of the guitar tone. But depending on the mic used, a small boost of a couple dB in the 8-12kHz range might add some subtle crispness and “air” to the instrument.

Personally, I rarely add EQ to the lead vocal…if the recording’s been made with a studio-quality large-diaphragm condenser (LDC)—I usually turn to a vintage Neumann U87. That’s because most studio condensers already have a subtle presence boost built in—somewhere between around 5kHz and 10kHz—which can help to pull a vocal recording out of the mix just enough to help it float over the top nicely, without having to be mixed too loud against the track. A small adjustment of a dB or two in that presence area, or to the midrange around 1k or so, might help to compensate for certain (nasal or husky) voices, but usually a great mic will get 99% of the job done right out of the gate.

It's a different story, though, if you’re dealing with a vocal track recorded with a stage mic, like the ubiquitous Shure SM57. 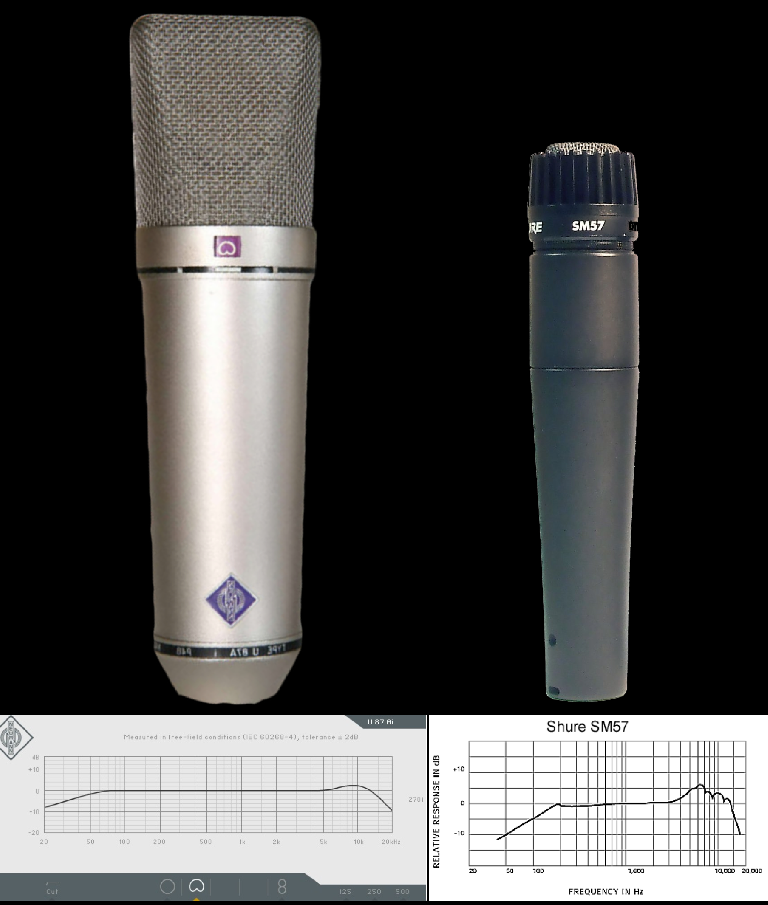 While on paper a dynamic stage mic’s frequency-response graph may look similar to the U87’s—with a similar presence bump—in reality it sounds quite different. This is partly the mic itself and partly due to the fact that a stage mic is usually right up against the singer’s lips, while studio recordings normally maintain about 6 inches to a foot distance. With a close-miked stage vocal recording, some boost in the 8-12k range may help to restore a little missing clarity (though you’ll never achieve the airy openness of a good condenser). A dip in the midrange—somewhere around 1k, give or take an octave—can help to compensate for the excessive closeness. And if there’s too much low end from the Proximity Effect—a bass boost caused by close-miking with a directional mic—a broad gradual rolloff from around 200Hz down can help to tame that.

Tip of the Iceberg

Of course these few suggestions are just the tip of the iceberg in terms of any discussion of using EQ in a mix, but maybe they’ll provide some rough ideas or general direction to mixers getting acclimated to the mysteries of EQ. To learn more check out our video courses on mixing...