Mixing Concepts: What Is Dynamics & Why You Should Care

Language
If you use a compressor plug-in you're already manipulating the dynamics of a sound or the mix. In this enlightening long-read tutorial, Joe Albano explains exactly what dynamics is and more.

Anyone who’s involved in audio production has come across the term Dynamics—it’s the subject of countless articles on recording & mixing, and then there’s that category in the plug-in folder, full of cool toys like Compressors, Limiters, Expanders, and Gates. But less-technical, more right-brained musicians and producers out there, as well as budding engineers and mixers, may often wonder, what exactly is “Dynamics”, and how does it apply to the day-to-day business of recording, mixing, and producing a song? Well, here’s a brief rundown on the basics of Dynamics, and Dynamics processors, and what it all means to someone sitting down to create their next musical masterpiece. 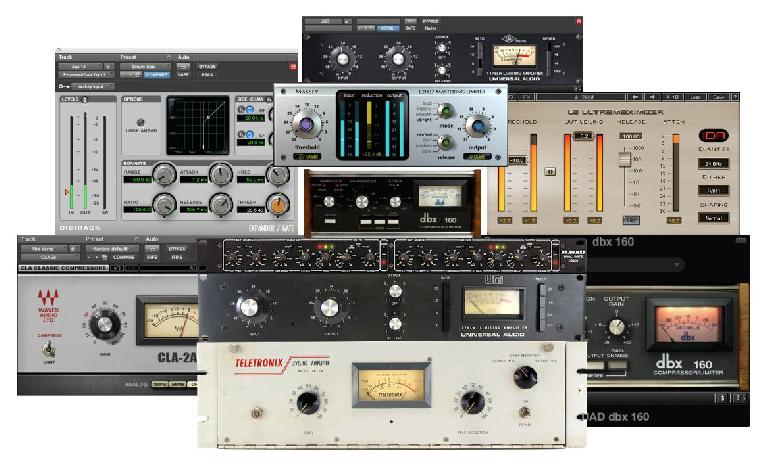 When it comes to audio, Dynamics refers to the variation in level—volume—in the audio signal, and when a musical part—like a recording of drums, or a vocal track—ranges from loud to soft over the course of, say, a song, the upper and lower limits of that variation—the difference between the loudest and softest levels—is the Dynamic Range. Audio levels are measured in decibels—dB—and Dynamic variations are also expressed in dB. For example, the dynamic range of human hearing—the difference between the quietest sounds we can hear (the Threshold of Perception) and the loudest we can handle (the Threshold of Pain) is about 120 dB, more or less. Differences between loud notes and soft notes on various musical instruments might be anything from around a few dB, to up to 50 dB or so (grand piano), or even more (think live drums), and the dynamic range of a full orchestra, from the quietest passages to the loudest fanfares, might be even greater—70 or 80 dB or more.

Older recording media were more limited in their dynamic range. The Dynamic Range of tape and vinyl—the difference between the softest usable level that could be recorded (above the noise floor) and the loudest level (before distortion (clipping) sets in)—was only around 60–70 dB at best. 16-bit CDs upped that to approximately 96 dB, and modern 24-bit digital audio has a (theoretical) range of 144 dB, exceeding the dynamic range of human hearing. 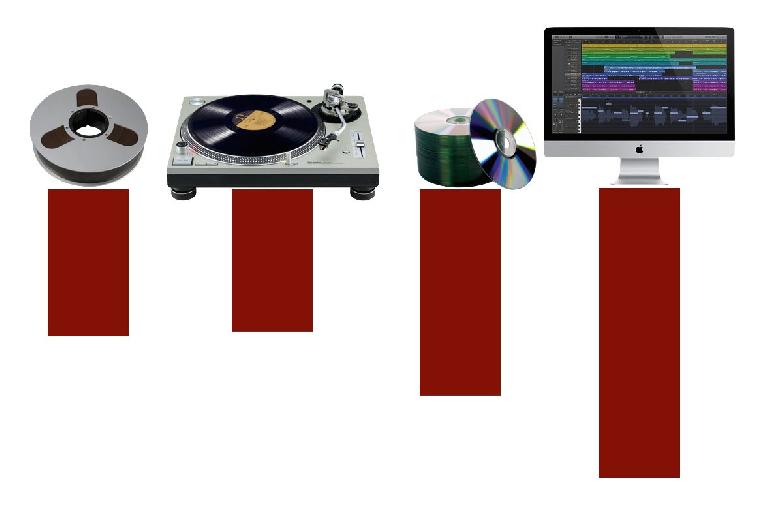 If you delve into the literature on audio levels and dynamics, you may come across terminology like macro and micro dynamics. The terms themselves are not all that common, but they do serve to illustrate the different ways dynamics are addressed in recording and mixing. Macro dynamics refers to changes in level over a longer period of time. For example, a rhythm instrument—guitar, keyboard—may play more quietly in the verses of a song, than in the choruses. Micro dynamics might refer to either of two things. It could describe more rapid changes in dynamics, like from note to note in a phrase, where some notes are accented (louder). It could also be used to describe differences in level within a note—for example, a hard-played piano note or drum hit will start off with a louder impact noise—a Transient—and then the rest of the note will be lower in level, gradually (or quickly) decaying to silence. The waveform graph in Fig 3 shows level (vertical) vs. time (horizontal), and you can see the variation in level of a typical percussive note, with its initial Transient, which lasts only milliseconds (thousandths of a second), and the main portion of the note, that either sustains (holds), or decays (falls off in level, as in this example). 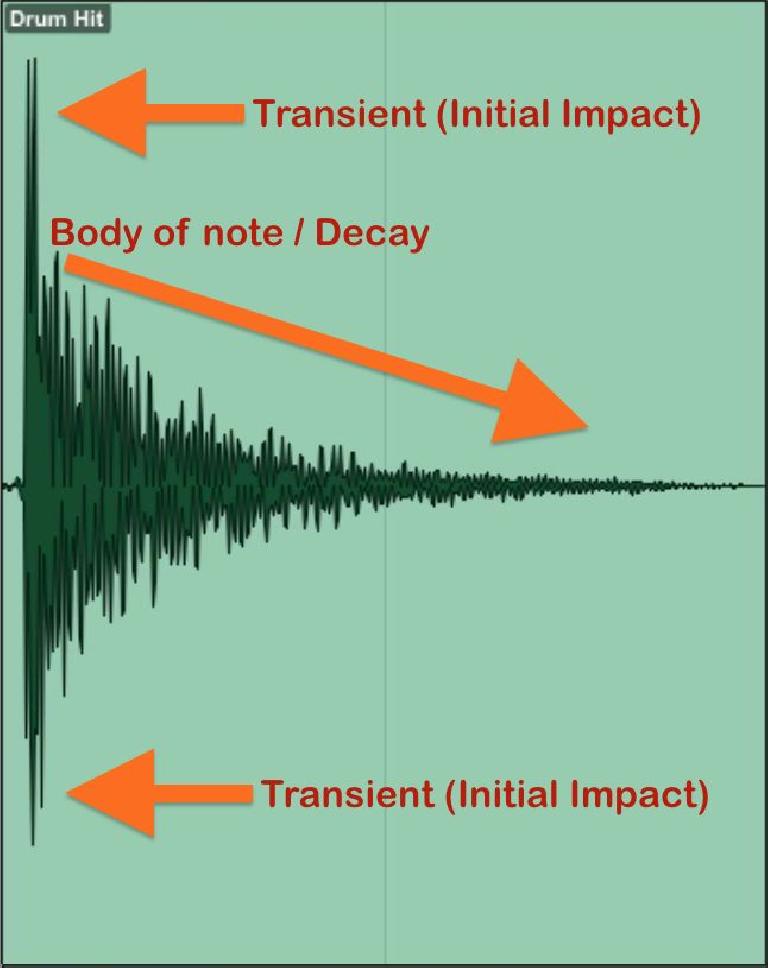 Fig 3 A waveform graph, showing an audio wave with a brief loud transient and the lower level of the body & decay of the note

The Macro-Micro terminology itself is not really important, but understanding those different ways that dynamic levels vary in music is. It’s these dynamic variations that recordists and mixers must know how to control and modify, either for technical purposes, or creative ones. And that’s accomplished with the standard Dynamics tools—the processors, both hardware and software, that we use on a daily basis to affect audio and musical dynamics.

There are four main types of Dynamics processors—the ones you see both in studio racks and in that Dynamics submenu in your DAW plug-in insert slots. They’re divided into two categories—those that reduce Dynamic Range, and those that increase it. Dynamic Range reduction is by far the most common application, but all these tools typically come into play in a multitrack mix. Compressors and Limiters reduce Dynamic Range, while Expander and Gates increase it. Compression is probably the most-used type of dynamics processing, but all can come in handy. Let’s take a look at how they work. 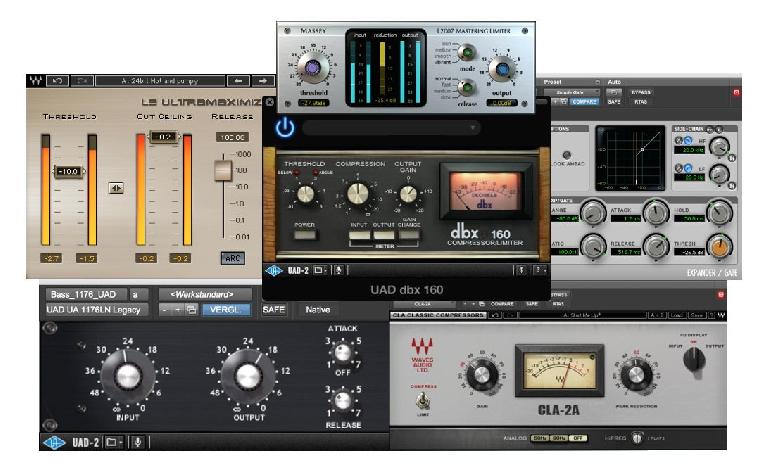 A Compressor reduces Dynamic Range, bringing the levels of the loudest parts (of an audio wave), and the quietest, closer together. It does this by reducing the level of the loudest bits, and then raising the overall level to compensate for any drop in average volume. A level Threshold is set, and any sound above that is reduced in gain (level). How much gain reduction is applied is determined by a Ratio control—typical settings might range from 2:1, to 4:1, up to 10:1 or higher. When a louder audio signal exceeds the Threshold by a certain number of dB, it’s reduced in level so it exceeds it by fewer dB, based on the Ratio. So, with a 4:1 Ratio, audio that goes 4 dB above Threshold will be reduced enough so that it only goes 1 dB above Threshold. Higher Ratios mean more gain reduction, and a narrower dynamic range. Ratios above 10:1 or 20:1 practically limit levels to the Threshold, for more extreme compression, and this extreme compression is called, naturally, Limiting.

An Expander works like a Compressor in reverse. Once again, there’s a level Threshold, and parts of the audio wave that cross that Threshold are reduced in level (gain). But this time, it’s the already-softer sounds below the Threshold that are further pushed down in level. So the difference between the (untouched) louder bits, and the gain-reduced softer bits is widened, for an increase in, or Expansion of, dynamic range. The softer sounds are again reduced according to a set Ratio. If the Ratio is preset to maximum, and the amount of gain reduction applied is so great that those softer sounds are reduced to the point where they’re inaudible, then they’re said to be Gated out, and that Expander is referred to as a Gate, or Noise Gate (so, just as limiting is a more extreme form of compression, gating is a more extreme form of expansion).

Noise Gates are often used to remove unwanted low-level sounds in a track, like leakage from other sounds in the recording room or from the musician’s headphone mix, or noises like buzzes or crackles that are drowned out by the main signal when it’s present, but become audible when it stops momentarily (note that a Noise Gate can’t remove unwanted sound that’s audible under (along with) the main signal—you’d need a different kind of processor for that). With some sounds, like breaths in a vocal track, it might be better to reduce them in level but not remove them (gate them out) completely, so gentler Expansion settings (less gain reduction) might be used instead. There are plenty of other applications for Expanders & Gates, including some creative tricks, but since my space is limited, I’m going to move on to the most widely used type of Dynamics processing, Compression.

Compression was originally invented to control the dynamics of music with a wide dynamic range, so it would fit in the available media. To make the dynamics of a full orchestra recording fit in the narrower range of tape or vinyl, compression was applied, hopefully reducing the dynamic range sufficiently, without detracting from the musical impact and excitement too much. Likewise, radio stations used limiting to keep sudden level jumps from exceeding broadcast level limits, which would incur a fine from the FCC. Music engineers adopted compression to control uneven dynamics in individual tracks in a multitrack mix, and they soon realized that compression could be employed more creatively, as well, to manipulate micro dynamics, like drum transients, re-shaping the attacks and decays of notes, for a bigger, fatter sound. And mixers and mastering engineers began to apply compressors and (specialty digital) limiters more aggressively to overall/finished mixes, to keep the average level more consistently loud, so songs would (in theory) stand out more on the radio (this is actually a deeply flawed theory, but unfortunately, excessive overall compression in mixing and mastering has become standard practice—see “Loudness War”). Paradoxically, modern digital media offer wider dynamic range than ever, but thanks to the (over-)use of compression and limiting, we often use very little of it.

But when used properly and appropriately, compression and limiting are really useful tools. They’re often used in recording, to prevent incoming signals from overloading the digital converters in the DAW’s interface. And in mixing, compression is a big part of the “sound” of modern recorded music. Compressors are routinely used to control both macro and micro dynamic swings. For example, a gentle compressor (like the famous LA-2A) might be used on a vocal track, to automatically control a vocal with wide dynamic swings, keeping the part more even in overall level, so it floats above quieter verses and louder choruses at the same, correct level. A more aggressive limiter (like the classic dbx 160) might be used to grab sudden loud notes on a bass track, that jump out of the mix distractingly, and pull them down to the more consistent level of the rest of the bass part. And creative compression (from a unit like the Urei 1176) might be called on to manipulate the snap and boom of a drum track, massaging the micro-dynamics of the impact transients vs. the ring of the drum notes, for a fatter, more exciting drum sound. 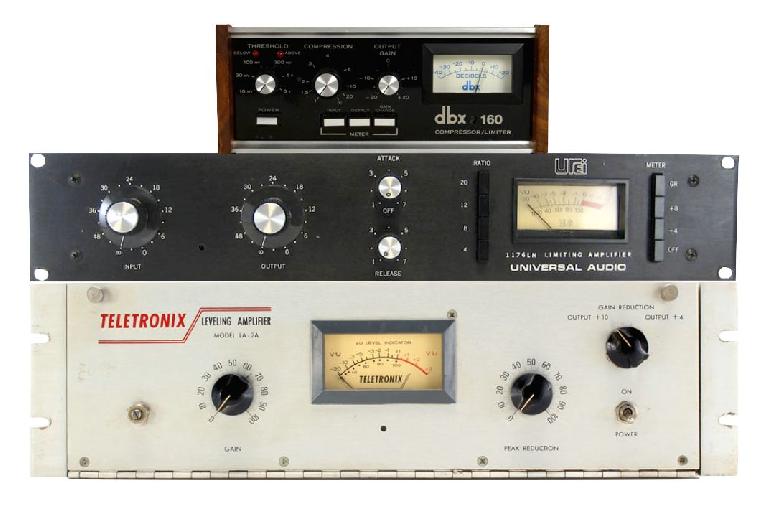 The contribution of compression—both for technical applications, like controlling excessive dynamic variation in a part throughout the song—and creative use—manipulating transient attacks and decays, to pump up drums and instruments—has really played a significant role in defining the sound of modern recordings. While it’s true that some musical genres—classical, traditional jazz—might avoid it, in line with a more minimalist, “purist” approach to processing, most of the time, compression is a mainstay. It’s not uncommon for there to be more than a dozen compressors in use, even on a moderately-sized arrangement, and anyone who wants to achieve that “professional” studio sound for their recordings and mixes will want to master this key processor.

Dynamics processors in general, and Compressors in particular, with their interactive controls (I barely touched on operation) are among the most difficult tools to thoroughly master, but the results are well worth the time and effort it may take to really get a handle on them.