Often thought of as a post-production or mastering tool, iZotope RX can actually open up a world of possibilities when it comes to creating and mixing music. Joe Albano explores its powerful features.

Vocal tracks often come with a host of issues that need to be addressed. iZotope RX has several modules designed specifically to help with this. The De-plosive module automatically detects and eliminates plosives (also known as p-pops), the bassy thumps that occur on certain letters like P and B. After a couple of simple settings, RX’s De-plosive module does this automatically, saving lots of time and a lot of tedious manual editing.

The De-ess module helps reduce the familiar problem of harsh sibilants that can occur on “S” sounds. Besides the usual filtered-sidechain method, De-ess includes an option that utilizes spectral shaping, for especially difficult or problematic situations.

Breath Control automates the process of removing or minimizing breath sounds, with sensitivity settings that help keep consonants intact. Depending on the vocal performer and the mic setup/position, this might take a little experimentation to find just the right sensitivity settings to minimize breaths without softening consonants too much. If you don’t try to completely eliminate the breaths, it can work very well—again, saving a lot of time that would be better applied to more creative aspects of a mix.

RX also has two de-clicking modules - De-click and Mouth De-click. The former is useful for eliminating random clicks, such as those generated by a vinyl record, while the latter is especially designed to remove mouth clicks, those little lipsmacks that can be particularly difficult to edit out. These 2 modules can eliminate these noises without negatively impacting the recording. 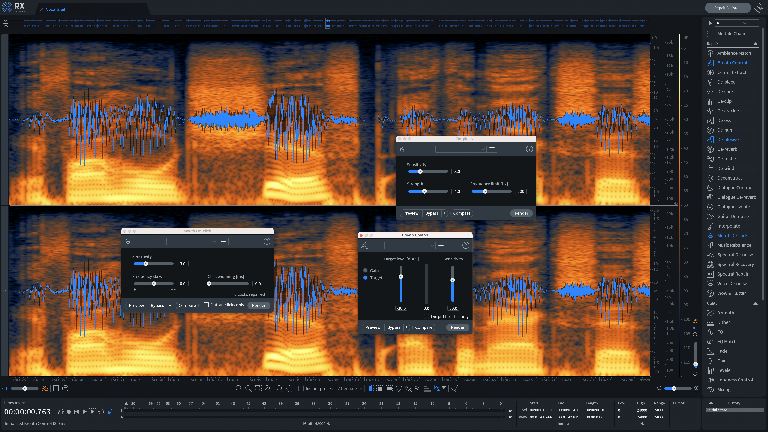 RX's De-clip is a revolutionary solution to the common issue of clipped audio. That could be audio that’s been clipped at the ADC—Analog-To-Digital Converter—resulting in the typically unpleasant digital distortion that can ruin an otherwise good take, an occasional problem when performers get a little more intense in a recording session after the level check.

The resulting harsh digital distortion can make a perfect take unusable. In the past, digital clipping was considered to be an irreversible error, but now, De-clip can restore the original audio of even severely clipped recordings. I have tested De-clip on a variety of tracks, including some particularly clipped vocal recordings, and the results have been remarkable. De-clip has allowed me to recover clean, usable audio from recordings that would have previously been considered ruined.

In modern music production, many tracks are close-miked and dry, with reverb/ambience added during the mixing process as desired. But sometimes a track may be overly ambient, and may not blend in properly in a mix that’s going for a tighter, more “studio” quality; or a vocal may pick up a little too much room tone, and it may get lost into the mix. It’s much easier to add reverb than to take it away, but the De-reverb module in RX is designed to address this issue with impressive results. It is most effective when it can “learn” the reverb from a section with the reverberant tail to define its spectral content. Although the De-Reverb module has more controls than other modules, with a bit of experimentation it is possible to remove a significant amount of unwanted ambience from recordings with clean results.  I’ve been able to remove a fair bit of unwanted ambience from various guitars and other tracks while avoiding any artifacts. There may be times when matching the ambience in one track to that of another track is necessary, though this is more likely to be encountered in post-production than in music projects. Nevertheless, there is also a Dialogue Match module that can be used for this purpose. 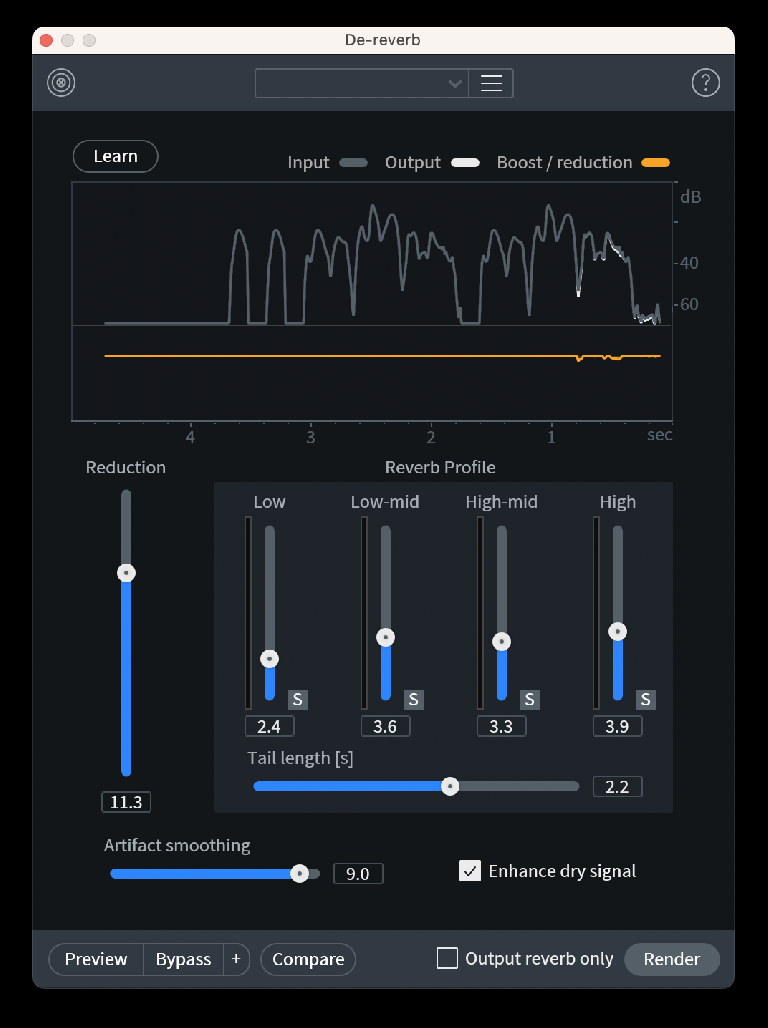 Sometimes when mixing, it may be necessary to use EQ to make sure one recording matches the tonal balance of another. This is often done when comping a track from multiple takes; as the tone can change due to the vocalist changing positions on the mic, or a guitarist changing pickup selection and amp settings. Because of this, the new take may stand out due to the small tonal differences. To prevent these edits from being too noticeable, EQ can be used to make sure the tone matches closely enough. Thankfully, the EQ Match module of RX can quickly accomplish this task. This module "learns" the tonal signature of the target file and then analyzes the audio that needs to be equalized and applies matching EQ to it. The process is automated, yet there is a control that allows for adjusting the strength of the EQ curve to make sure the tonal change is subtle and smooth. 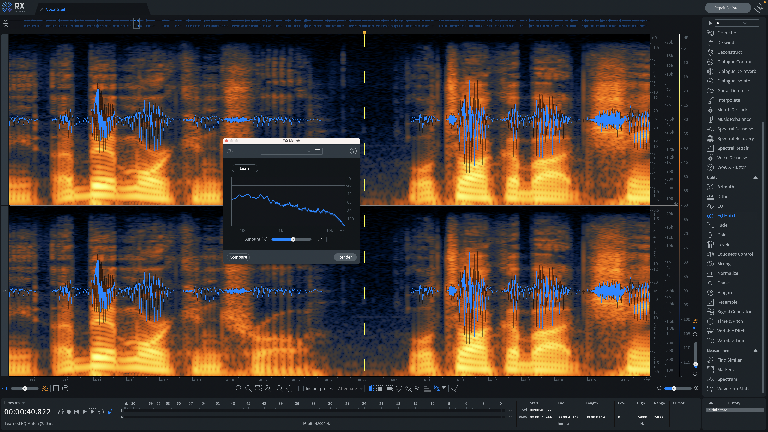 RX's Spectral Repair module is renowned for its ability to effectively remove unwanted sounds from audio recordings. Examples of this could include the sound of a siren leaking into a vocal mic, an overly loud snare in a piano recording, or the cross-bleed between a vocal and acoustic guitar track. Additionally, it can be applied to more ambient sounds, like the hum of an air-conditioner. Several modules in RX can be applied to these common problems.

De-hum can filter out up to eight harmonics of AC hum without impacting the tone of the track, even on a bass track. Spectral De-noise can learn the spectrum of unwanted noise and remove it from the track, while Voice De-noise is tuned to removing these noises from vocal tracks. Guitar De-noise allows for the removal of excess noise from acoustic or electric guitar recordings (finger squeaks, fret noises, hiss and electrical interference) to produce a clean, yet still natural sound.

RX also includes the Deconstruct module that can be used to manipulate the levels of tone and noise in audio selections. This is useful for many types of audio, for example for adjusting the breathiness of a wind instrument or removing the sound of a squeaky chair in a piano recording. For more difficult problems, the Spectral Repair module can be used, allowing the user to graphically draw out the unwanted sounds.

Another potential issue with any music session is headphone bleed, This is when the sound from headphones not adequately sealed over the ears is picked up by the close mic. This leakage (recognizable by the familiar tst-tst-tst sound) might be picked up by the mic and intrude to an unacceptable degree on the recording. While a number of RX’s modules could try to address this, RX has one specifically geared to this exact problem: De-bleed.

For best results, De-bleed requires access to the track that bled into the microphone. Ideally this would be applied while that exact headphone mix is still dialed up in the mixer, so De-bleed can learn it and then apply that to the task of removing it from the main audio in the recording. However, I’ve tried it even well after the session, by approximating what I thought would have been in the monitor mix at the time the leakage occurred, and letting De-bleed learn that approximation, and it still worked quite well. You have to make sure that the reference track is more or less time-aligned with the leakage in the main track, which might involve doing a quick trim/edit to a copy, but this will help the process work much more effectively.

With the help of iZotope's RX Advanced, which includes all the modules described here (and more), audio engineers and musicians who frequently need to clean up their tracks before delving into the creative aspects of the mix. Besides RX Advanced, iZotope has a couple of smaller bundles that make some of these modules available at a lower price point. These modules, which for the most part are not commonly found in DAWs, can help prevent technical problems from getting in the way of a great mix, so it's definitely worth exploring.

Check out this RX 10 Video Manual by audio expert Joe Albano and learn to turn your imperfect audio into pristine recording faster than you can say "RX"! 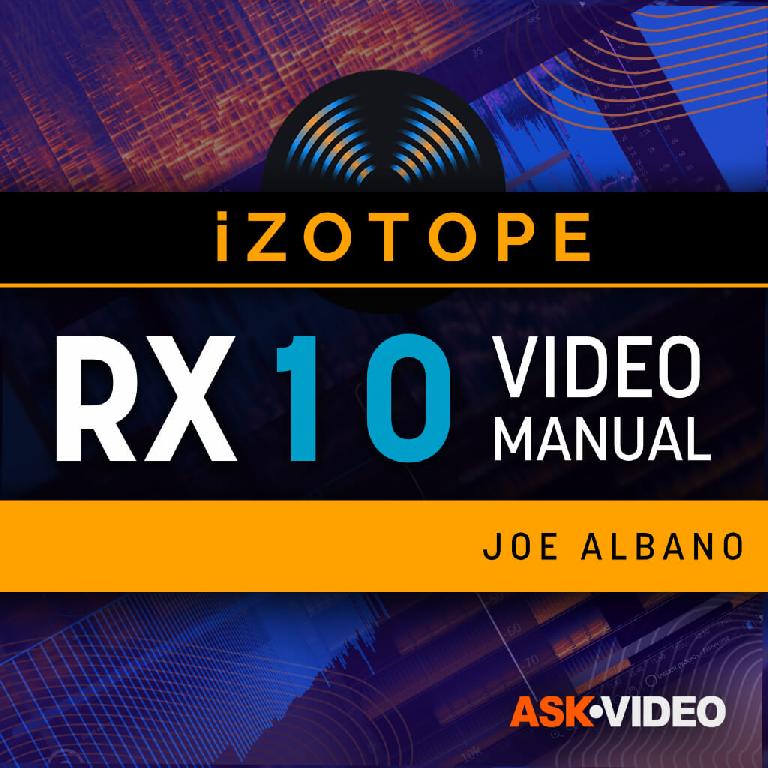 "Joe is a musician, engineer, and producer in NYC. Over the years, as a small studio operator and freelance engineer, he's made recordings of all types from music & album production to v/o & post. He's also taught all aspects of recording and music technology at several NY audio schools, and has been writing articles for Recording magaz..." Read More