Language
So, you've finished recording and arranging your song, and you're ready to mix. Don't feel daunted if you're wondering where to start. Joe Albano shares his tips on how to approach the mixing stage.

If you watch an experienced mixer sit down to mix, you may wonder how he decides exactly what needs to be done, and in what order to approach the various elements of the mix. Well, the obvious answer is that he relies on years of experience developing a critical ear and honing a process that suits his individual approach—but how does a fledgling mixer develop his/her own process and methodology? Well, one approach might be to divide the mix into several components—areas that will need to be addressed—and then, after some practice, settling on an efficient workflow for accomplishing these tasks.

Elements of a mix

A typical mix will have a number of specific elements that will need to be addressed—some for technical reasons, others for creative purposes—and, in many cases, both. These would apply to both audio recordings (live instruments, vocals) and virtual instruments (synths, samplers). A (somewhat simplified) short list would include: 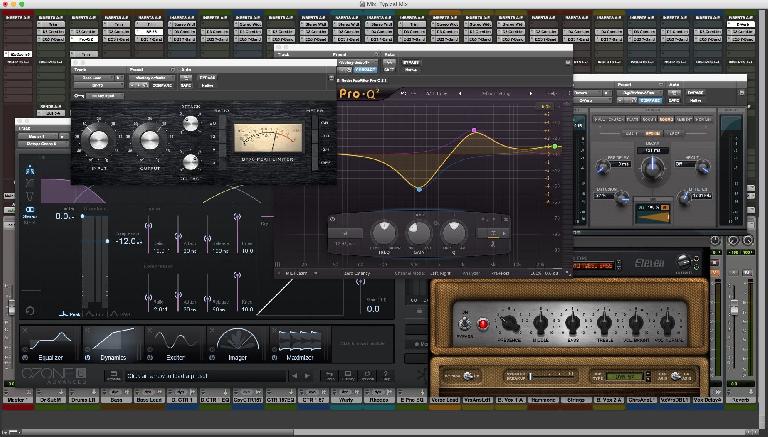 You’ll notice I didn’t include tasks like comping, or processing like time and pitch correction (Warping, Flexing) or harmony creation. To me, these are really part of the arrangement stage, and I prefer to have them finished and out of the way before I begin to mix, so I won’t be distracted from the focus on the sound of the mix by tasks that involve purely musical considerations.

Now, on paper, it could seem like the most logical, organized approach might be to go through the mix track-by-track, addressing each of these aspects in turn, and then combine the finished, processed tracks, with a few final adjustments to optimize the blend. But when you sit down to work, you’ll quickly find that it’s much more of an interactive process, with a lot of back-and-forth between tracks and particular processes, and between soloed tracks and the full mix. It’s fine to address the mix components individually at the outset, but pretty early on, you’ll have to start factoring in how your adjustments sound when the tracks are blended together, which can drastically change how individually processed tracks sound. The mix becomes a constant back-and-forth between individual specifics, and overall blend, and it’s only when both of these aspects are tweaked to your satisfaction, that the mix is finally done.

As I said earlier, every mixer has his/her own unique approach to addressing the various elements—not only is there no one right way to do it, but even if a mixer has a preferred approach, it may vary drastically from mix to mix, depending on the arrangement and the condition of the individual recordings and instruments involved. That said, here’s how I would typically go about it, for a hypothetical mix.

The first thing I do is to get the “lay of the land”—you need to know what you’ll be working with. If I haven’t been involved with the song at the recording stage, where I might have already dialed up some settings, I start with all the faders at Unity Gain (0.0), and then solo each track in turn. This way I can familiarize myself with the raw material, checking for both technical issues that will have to be addressed as the mix progresses, and musical issues or ideas that I may want to incorporate later. If it’s a big mix, I might make some notes, using the DAW’s notepad feature or good old-fashioned pen & paper (in larger studios, that may be one of second/assistant engineer’s duties). Once I feel I have a good enough idea of what I’m dealing with, I do a very quick rough mix—this serves two purposes. It lets me get good overall working levels for the tracks (where the level in the master bus peaks at around -6 to -3 dB or so). It also lets me hear a reasonable blend of musical parts, so I can get a feel for the tune.

Then the next thing I do is usually panning. I like to get the elements of the arrangement panned early on, so I can start to visualize the stereo field for that particular mix. I might apply some doublings (real or ADT) at this early stage, if I’m fairly certain I want to turn some individual tracks into hard-panned stereo doubled parts.

Then I usually turn to EQ. Most mixers, at this stage, will start going through the tracks one by one, at first, applying EQ as needed to the different instruments, often starting with the drums, which typically include 8–10 tracks that will need to be EQ’d individually. But as the EQing progresses, I’ll start flipping between the soloed drums, soloed drum kit, and the full mix, to see how the EQ is working in the larger context(s). I’ll then move on to bass, rhythm instruments, etc. I won’t be ready to finalize any EQ until I’ve applied preliminary EQ to most of the tracks, and this is where the back-and-forth between solo tracks and full mix begins in earnest.

When I’ve got the mix EQ’d (keeping in mind that I’ll certainly be making further tweaks right up to the last minute), then I turn to dynamics—compression. Typically I’d first address technical issues of balance, and at this stage I’ll be deciding how to deal with them, either with level tweaks (and possibly Automation, although I’d still leave that till later), or with compression. When all the parts are in reasonable musical balance, then I might start toying with compression as a creative tool (drums and other parts), especially if I want a particular sound for certain instruments that I know I’ll need compression to achieve.

By now the mix is starting to take shape, and since I have some idea of how things are blending together, I’ll add some reverb and ambience. If the tracks were really unsettlingly bone-dry, I might have thrown a little reverb on at the beginning, just for comfort, but now I’ll start applying the room tone for real. I usually start with at least two or three reverbs—these days I prefer convolution reverbs. There’ll be one which supplies small ambience—like stage ambience, mostly early reflections—and another that provides a larger space, with a longer tail—the room itself. I tend to combine these on most tracks—sending different levels to each can subtly “place” elements in the foreground or background of the mix, like lead vocal front and center, and backing vocals behind, to the rear of the virtual “stage”.

At this point, if everything’s sounding good so far, it’s time for the “ear candy”. This would be the subtle (and not-so-subtle) effects that enhance the mix in various ways. Naturally, this would be specific to each mix, so I won’t try to generalize.

Fig 3 A typical finished mix, with track levels & panning, and various plug-in processors, including compression, EQ, reverb, and other effects.

Now, all throughout the process, there’ll be the constant back-and-forth between tracks and full mix, and each change made—even very small tweaks—will often require compensating tweaks to other tracks, when the full mix is checked. If you’re not careful, this process can go on forever (especially if you’re not working to a hard deadline). It’s easy to become so focussed on the details, that you become so distracted by minutiae that you lose the big picture. To deal with this, again, like most mixers, I take frequent breaks, and then come back to the mix and play through the tune uninterrupted, shifting my focus to the overall sound, trying to hear as a new listener would for the first time. This is easier said than done, especially when you’ve been working intently on the mix for a few hours. Most mixers have their tricks/routines they do to help them shift focus—taking a short walk, briefly playing other songs, listening from another room, etc. If time permits, ideally I’d break up the mix over two or three days—coming back to it after a good night’s sleep invariably reveal obvious issues/flaws that I was too focussed to notice when I was in the thick of it. (This is also why many mixers prefer not to master their own mixes—the mastering engineer’s fresh ears are one more chance to have somebody say “er... are you sure about that?”)

And with that, I’m out of space, so I’ll quickly wrap this up by reiterating that this is just a simplified description of one of many possible approaches, and that every mix is a little different—even if you develop a routine that works for you, you’ll certainly find yourself deviating from it on a regular basis, as you adapt to the unique requirements of a particular song or project. But hopefully, these suggestions will prove helpful for anyone who’s staring at that proverbial “blank page” of raw tracks, just waiting to get started on that perfect mix.

Learn more about mixing and mastering via these video courses in the Ask.Audio Academy.